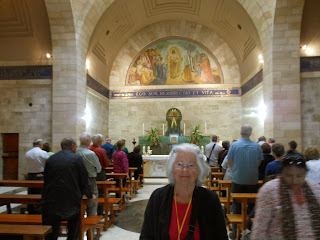 A cute story from last night at dinner:  Jim had what appeared to be roast beef and said it was very good.  Darlene began talking about eating habits and how she never tells her children what might or might not be good or bad tasting and as a result her children will eat just about anything.  She said she thought they would even enjoy the tongue cut of meat that was being served this evening.  Yes, Jim’s roast beef was the tongue and he said he wasn’t sure if he’d have taken it had he known but was glad he did.  Actually Darlene’s husband Steve heard the story and then tasted his beef and agreed with Jim that it was very tasty!
Back to today; we were up at 6 am and on the bus at 8 am for our early morning drive back across the border into Palestine for our appointment in Bethany.  It’s only two miles outside of Jerusalem but because of the walls and fences between them; the trip is now fifteen miles. 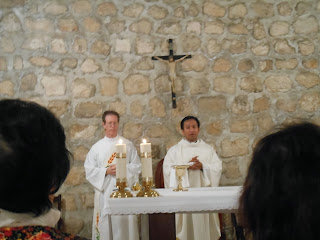 We visited the Church of Saint Lazarus, the brother of Mary and Martha who Christ resurrected four days after he died.  We first visited the main church where there was a group having a Mass and then went into one of the oldest chapels in the complex to have our own private Mass.  Deacon Joe Sullivan assisted father with the Mass.  Afterwards we walked out into one of the ancient streets next to the church and sat for the reading of the Bible story of how Jesus raised his good friend Lazarus from the dead four days after he was laid in the tomb.  This was the first resurrections that Christ performed that was not on the same day and thus difficult for the Rabbi’s to disclaim.   This is a favorite story of mine as Lazarus’ sisters are Mary and Martha who have a large part in the story.  My twin sister and I were named after them. 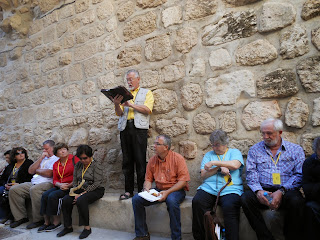 Jim did the reading of the story and did a great job except at one point he said that Lazarus had lain in the tomb for four years instead of four days!

Soon we were headed towards the street where the bus was parked and next to the bus was a live camel waiting to give us rides for only five dollars!   Almost everyone took a turn; even Father Paw climbed up behind one of the Pilgrims for the short ride that took about two minutes at the most!  Lots of fun for everyone!
By 10:30 am we were on the move and heading for the City of Jericho.  Arrived at 11 am and we then took a cable car up the mountain known as the Mount of Temptations where it is believed that the devil tempted the Lord. 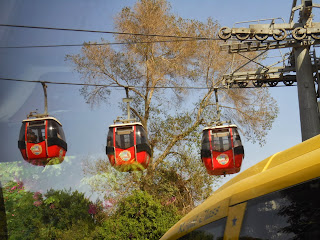 Today we enjoyed the views of the lush Jordan Valley and then hiked along the ridge to the Monastery of the Temptations that is run by Orthodox Christians as a tourist site today.  It was built many years ago for the monks that had previously lived in the caves that we could see on the mountains across the valley.  A great exercise for those that completed the climb to view the inside of the Monastery.

We celebrated a birthday today for Helen who is twenty one and a half…going on somewhere in her eighties.  She rode the camel and made the climb up to the Monastery; and was game for all of the activities that we did today!  She’s quite a lady and we should all have her energy! 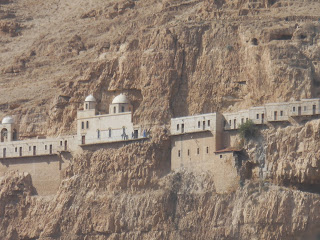 By 12:45 pm we were on the bus and headed for the Jordan River that divides Israel and the Kingdom of Jordan.  When we arrived about fifteen minutes later there were many buses in the parking lot.   This is the spot on the Jordan River that John the Baptist baptized Christ and there were many groups doing both baptisms with complete emersion under the water and those with just touching the water; plus many of us who were there to renew our baptismal promises made by our godparents for us as babies.  Chaotic without a doubt but also very meaningful once you closed out the noises from the other groups.  We had our readings and sang a few songs before taking a moment to stand in the water.  As I mentioned previously, the water at this point is very muddy because of the number of people in and out so for some it was just too much; I did put my foot in along with many others for a photo before leaving. 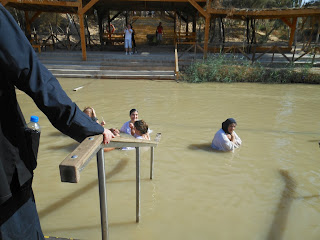 By 1pm we were headed for the Dead Sea for a swim!  First we had to cross the border into the Kingdom of Jordan.  Along the way Raouf told us the story of the shepherd boy who found the first of the Dead Sea scrolls in caves while searching for a lost sheep in November of 1947.  They were eventually identified as the Old Testament books that were written over two thousand years ago.  There is a National Park called Qumran that has the caves but we stopped there only to enjoy a fast lunch.
We were told to only eat and not to shop as we were on our way to the Dead Sea to swim in the very salty waters.  We arrived about 3 pm and nearly everyone participated in the swimming…well really only floating.  Many also covered their bodies in the mud, including our birthday girl, and let it dry before washing it off.  Much like going to an expensive spa.
Soon we were all scrubbed and ready for the return bus ride home of nearly an hour; not including the stop for more shopping at a ceramics shop that enticed many of us to purchase more things to take home.
Rolled into hotel driveway about 6 pm after finishing our rosary on the way home.  Time to clean up and go to dinner in the hotel at seven o’clock.
Darlene entertained us all this evening at dinner when she decided to give each of the members of the table new names!  The trick will be to see who can remember them tomorrow!
Posted by Martha at 12:33 PM