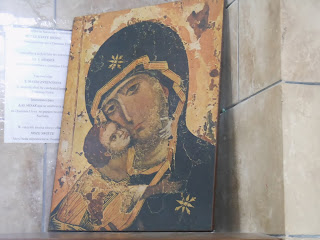 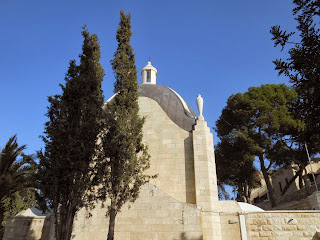 We were awake well before the wakeup call and enjoyed an early breakfast.  By 8 am we were all on the bus and headed off in the bumper to bumper traffic to the Mount of Olives.  It took us at least thirty minutes to travel the short distance that on the Sabbath would have taken only minutes.  The Mount of Olives is outside the Eastern Walls of old Jerusalem above the Jewish Cemeteries.
During our ride we did several things.  First, as soon as we arrived to the bus the games began with the name changes that Darlene gave us last night.  Lots of fun and many mistakes!  Jacques and Claudette Germain, our new names, confused even me!  Richard is Stanley at the suggestion of Father Paw who told the story about the “Flat Stanley” that a school boy had him bring on a previous trip. If you have not heard of this; school children are assigned a project of making a large paper doll and then finding people to take “Flat Stanley” on trips.  When they return they bring photos of him at all the places they visited on the trip.  This is shared with the class.
Secondly we sang happy birthday to our song leader, Roberta, who celebrates her sixteen and a half birthday today!  We practiced our hymn for this morning and Raouf gave us information on today and tomorrows activities.  I also collected email addresses for those that had requested photos of themselves at the Dead Sea yesterday while they were covered in mud! 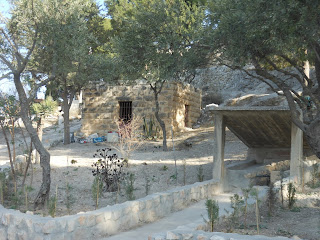 The Mount of Olives is covered with graves as they believe that the Final Judgment will begin on this site and they want to be the first ones.  Also, people who visit graves here leave small rocks for two reasons:  1) they were late in arriving and missed the funeral and the rock is to witness that “I have come”; or 2) they believe in the Day of Judgment and want the person who will get in first to “remember me”.
The cemetery for Christians is at the bottom of the Mount of Olives in the olive grove and is much nicer.  Newer and graves are spaced far apart instead of being up against one another as in the Jewish Cemetery; partially because they are newer and there are fewer!  In the slideshow you’ll see a pyramid in the cemetery that I can’t remember the story about but nearby is the grave of Oskar Schindler from Germany, a Christian who moved to Israel after the war when he saved thousands of Jews from the Nazis. 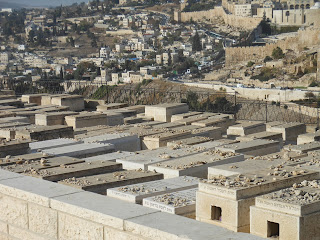 Soon we’d arrived amid hundreds of other pilgrims; each bus vying for a good parking place.  Quickly out of the bus with nothing but essentials; we walked down the hill to the Dominus Flevit Chapel that celebrates the site where Jesus wept over Jerusalem.   We had reserved the chapel for a Mass that was celebrated with Deacon Joe Garza assisting.  An interesting symbol on the front of the altar was a Rooster with his wings spread for the baby chickens underneath.
We sang Amazing Grace for our entrance hymn and I have posted the video I took on Facebook; only the singing and the image is focused on the icon of the Virgin Mary on the wall.  Our singing is quite good at times thanks to some very good voices in the group! 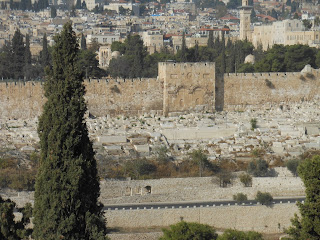 After Mass we sat on the wall overlooking Jerusalem from the north.  There Raouf continued to instruct us on the history of the city.  There are four walls; one in each direction.  There are two gates on each side.  On the North side you have the Gate of Saint Stephen, also known as the Lion Gate where we entered last night; and the Golden Gate in the Tower in the center.  But that gate is locked and they built Muslim Cemeteries in front of it because of the fact that the Jews believe that during the Final Judgment they will enter the Holy City through the Golden Gates.
The Old Jerusalem City is divided into four quarters:  Christian, Jewish, Muslim and Armenian.  Because the Armenians were scattered to the winds they were welcomed here in Israel.  The Armenian Church shares custody of the Church of the Nativity in Bethlehem with the Greek Orthodox Church.  Something we learned over the phone from Jim’s sister as her daughter-in-law is Armenian.   Raouf said that there are two thousand Christians, three thousand Jews and the rest are Muslims within the old walls. 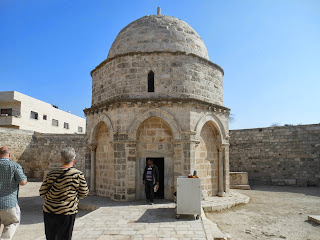 From there we continued walking down the hill through narrow walled streets between the Jewish Cemeteries until we reached the Chapel of Ascension where it is believed that Jesus ascended to heaven from a rock that has been protected over the centuries.   Today it is a Muslim Mosque but they allow the Christians to visit the site by paying a fee to enter.  On Ascension Thursday, only one day a year, they allow the Christians to celebrate Mass in the Holy Site.
A short walk down a very steep street brought us out to Akram and our bus.  From there we crept along in heavy stop and go traffic for nearly half an hour to go the short distance to the Church of the Pater Noster.  Exiting the bus we rushed down another steep path without anything on our person but our cameras (if we listened to Raouf) as we were assaulted every step by vendors attempting to sell us things.  When we arrived at the site Richard had lost his cell phone that he was using for a camera.  It was in his breast pocket; the pickpockets are very quick!  Fortunately is was an IPhone and he’d connected it to the cloud so his photos were safe in the electronic sky!  We all learned a lesson about listening to Raouf when he tells us to leave things on the bus. 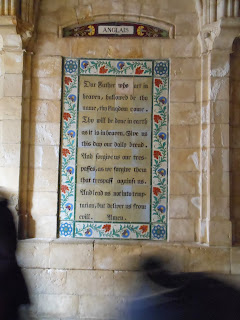 The Pater Noster is so named because it is the cave where Jesus taught his disciples to say the Our Father.   Jesus was asked how does one pray to God?  And Jesus responded “Our Father who art in Heaven…..”   The walls inside and out are covered with the prayer of the Our Father in one hundred seventy four languages from around the world.  I have put photos of many in the slideshow.  While we stood in the cave we joined hands in prayer as we said the Our Father together. 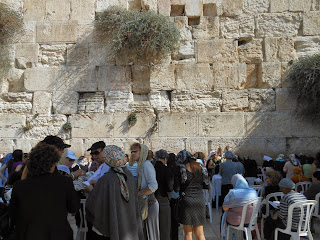 Back on the bus for another short distance but very long drive (because of traffic) to the Dung Gate into the old city.  There we walked to the Western Wall of the Temple Mount that is commonly known as the Wailing Wall for the Jewish Faith.  It is the only remaining wall of their temple and until the coming of the Messiah when they will rule Jerusalem and rebuilt their Temple; this is as close as they can come to worship in the ancient city.  We walked through security, women on the right and men on the left before entering the common area.  As we approached the wall we again split, the women on the right and men on the left.  We were able to approach the wall, touch it, say a prayer if desired and leave notes in the wall on tiny pieces of paper.  Interestingly, the women stood on chairs to see across the fence to the men’s side so that they could participate in the many Bar Mitzvahs that were happening on the men’s side.  They would all cheer and toss candy at the group of men surrounding the boy! 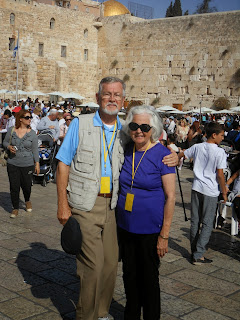 We walked past many groups celebrating even though it was a Monday; lots of music with the groups as they walked towards the Wailing Wall.  We even saw one ram’s horn being played.  Back out to Dung Gate to the waiting bus for our ride back to the hotel.
We each enjoyed eating out on our own today.  Some walked the old city while others climbed on the city trams for a tour of the newer sections of the city.  And a few of us have enjoyed an afternoon off to relax and enjoy our hotel.  Lunch for some was in a very nice restaurant in the American Colony Hotel; and others found a fast food place nearby for Pita bread sandwiches.  We even found our bus driver Akram getting his lunch there.   Raouf was off to visit his sister who lives an hour north of the city he told us.  Tonight’s dinner will be in our hotel.  It has been nice having the opportunity to write my blog before dinner!  I’m looking forward to an early to bed as in two days we will be on the airplane for fourteen hours.
Hope you enjoy the slideshow:
Posted by Martha at 10:34 AM