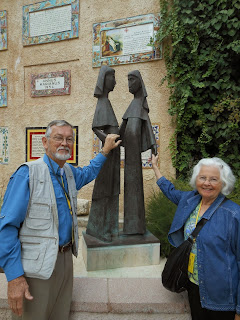 Awake at 5:30 am, breakfast at 6:30 and on the bus ready to roll by 7:45 am.  Long day ahead of us and Raouf decided we needed to start earlier to try to beat the traffic.  Well I think all of the other pilgrim groups in our hotel decided the same thing; there were so many buses in front of the hotel that just finding our bus was a real challenge.  Our yellow daisy in the window helped! 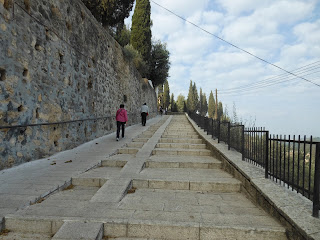 Soon we were headed for the highway amid the traffic of buses and people going to work.  It took us about forty-five minutes to reach Ein Karem, the birthplace of John the Baptist.   There are several sites that we visited in this town.  But to reach the first one we had a quarter mile walk up a steep hill, well about a thirty degree angle.  Part of the way up we stopped to visit Mary’s Spring; so called because Mary would fetch the water for her cousin Elizabeth from this well during the three months she spent with her near the end of her pregnancy in the house that we will be visiting.  Mary was also carrying the baby Jesus in her womb at the same time.   Continuing up the hill we soon reached the Church of the Visitation.   This was built over the site of the home of Zacarias and Elizabeth who were blessed with the birth of Saint John the Baptist very late in life.  There are many paintings and statues of the two women together celebrating the fact that both were carrying babies during the same time. 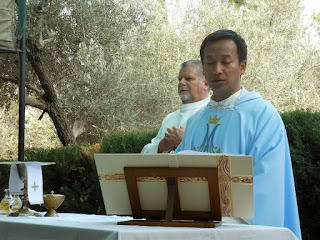 There was a Mass in progress in the main church but we were fortunate to have the use of a beautiful outdoor chapel overlooking the gardens for our Mass this morning.  Father Paw wore blue robes to celebrate the Mass and Deacon Nick assisted during the Mass.  It was inspiring to hear the words as we looked out into nature and when we sang, the birds sang with us.
After Mass we explored the Upper Church and the Crypt below that has remnants of the cave that was the base of Zacarias and Elizabeth’s home.   Also in the Crypt was the stone that the bible tells us was brought by angels and placed over the mouth of the cave to hide the baby John the Baptist from the soldiers who were sent out to slaughter all male infants in order to kill the Messiah who the kings heard had been born.
The bible tells us that Mary first uttered the words of the Magnificat during the time she was living with Elizabeth.  This prayer is written in many different languages on large plaques that hang in the courtyard of the home.  This is a prayer that is said daily by millions of Catholics around the world. 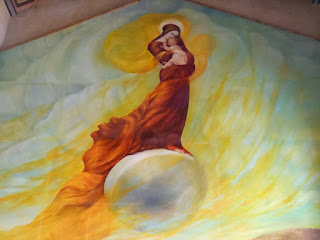 We then walked back down the hill towards the village and there visited another church that is built over a home that was owned by Zacarias and according to the bible, this is the home where John the Baptist was actually born.  This church is known as the Church of St. John the Baptist.  Again large plaques hang on the walls of the courtyard.
It was nearly 11 am when we were safely back on the bus again.  This time we had about a fifteen minute ride the Israel Museum.  We saw two main exhibits while we were there.  Outside there is a huge model on the scale of 1-50 ratio of the City of Jerusalem in the year 70 AD before it was destroyed.  Remember that all of the churches and sites that we are seeing have been reconstructed due to massive earthquakes and non-Christian rulers over the centuries. 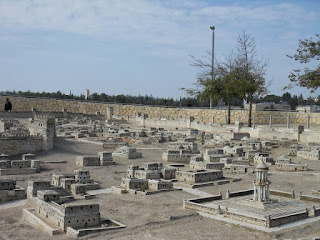 But this was a very accurate model during the time of Christ.  This shows the Temple built by King Herrod the Great; the Western Wall called the Wailing Wall that we visited is the only remaining piece of the Temple and that is where the Jews worship today.

The second exhibit is a special building built to house a selection of the ancient Dead Sea Scrolls that were found in caves in 1947.   Also within the building is a display of ancient scrolls of the Jewish Torah.  The exhibit is called the “Shrine of the Book”.  Outside there is a huge white water fountain shaped like a jar, representing the good people and a black wall that represents those that will not be saved at the Last Judgment.
Back on the bus we headed for the West Bank of Palestine where we had lunch at a restaurant called Ruth’s.  Very good food, fast and easy with some choices.  Tomorrow is our last day so there was a hot topic of conversation around the tables regarding what we’re going to do during our three hour solo time in the afternoon? 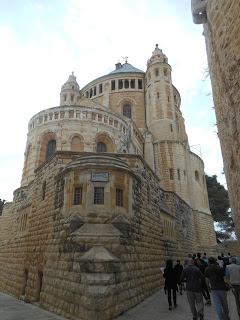 About two o’clock we were back on the bus for our next site; Mount Zion.  Here we had three things to visit.  We first went to the House of the Blessed Mother known as the Dormition Abbey.  This church is over the house where Mary lived until her son returned and from this place we believe that she was taken up into heaven by Jesus.
We then walked to the House where Jesus and his disciples held their Last Supper, The First Mass, His first appearance after Resurrection and the visit to Thomas who did not believe the rest of the disciples.  This was also where they hid for ten days afterwards and were visited by the Holy Spirit that gave them the strength to go spread the gospel to the world.
Nearby we visited the Tomb of King David that is now a synagogue; there we had to go in a separate area from the men.  The men had to cover their heads.  There were many people praying inside of the rooms.
A short walk brought us to St. Peter of Gallicantu where the cock crowed and Peter denied knowing Jesus three times as the bible had prophesied.   This is also the place where they have discovered the dungeon where Jesus was held during the night after he was arrested.  We were actually able to descend into the dungeon by way of stairs that have been cut into the stone and stood on the stone floor where Jesus spent the night. 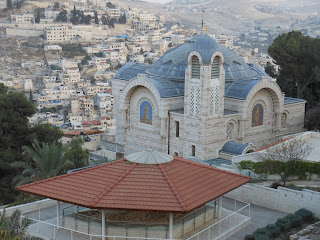 There is a faint drawing on the wall that is supposedly from that time and possibly made by Jesus.

Our last stop of the day was to view the area where Jesus struggled up to this area on ancient steps that are blocked off and you can only view them.  But they feel that it was more than likely that Jesus used these steps from the Gardens where he was arrested to the house that held the dungeon where he was held overnight.
It was a long day and dark by the time we returned to the hotel.  An early dinner as we are going to be on the bus by 5:30 am tomorrow to say our Mass in the Church of the Holy Sepulchre. Tomorrow's blog will probably be written after I arrive home.  I hope you enjoy the slideshow from today:
Posted by Martha at 12:10 PM