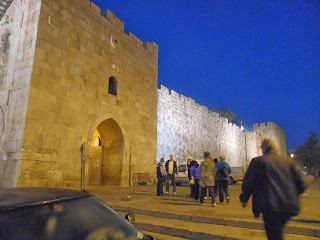 Our day began very early; 5:15 am on the bus for a short drive to the old city where we walked through the Gate of Herrod.   As we rode in the bus we listened to Steve read the Passion for Palm Sunday.   Entering the city we walked uphill for most of the way on stone streets with dark corners using our flashlight. We prayerfully followed the Via Dolorosa, the Stations of the Cross, through the old city to the Church of the Holy Sepulcher which houses the tomb of our Lord.  We stopped at each Station to pray the prayers and ask for God’s mercy as we recalled his painful journey to Golgotha.

There we went up a series of steep marble steps to the upper floor where we were able to spend a moment at the Altar over the spot on the hill known as Golgotha, the place of the skull, where Christ was crucified on the cross.  Kneeling down we reached down about a foot through a small hole in the floor until we touched the rock.
Then we proceed to a chapel beside the Altar where we celebrated Mass with Father Paw and all three deacons.  It was an extremely emotional experience for all of us; hardly a dry eye in the room. 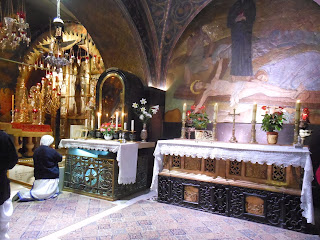 From there we walked back down the stairs to pray at the slab of marble where Jesus’ body was prepared for burial after he was taken down from the cross.  We saw a portion of the pillar where Jesus was tied and whipped that has been moved inside this church to preserve it.   We also saw through a window the lower portion of the hill of Golgotha showing the crack that split the hill at the time he died and allowed him to reach down into the earth and pull up the skull of Adam who was buried here.

But the main visit was in the tomb of Jesus.  We stood in a long line for over half an hour to enter this sacred space.   We first entered the entrance cave that has the last remaining piece of the rock that was rolled in front of the cave and then removed by the angels. 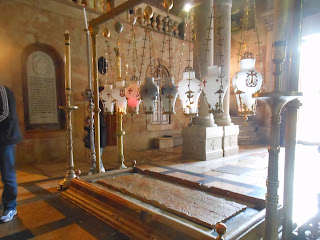 In the second portion of the cave we were able to touch the slab that held the body of Jesus Christ from Friday sundown until Easter Sunday when he was resurrected.  It’s hard to envision the emotions that flowed though each of us during this nearly four hour journey along the agony of our Lord Jesus Christ.

It was 9 am by the time we walked through Jaffa Gate to our waiting bus.  Our legs ached from standing, climbing and walking on the marble streets of Old Jerusalem.  There were no places to rest and most of the time we were walking slightly uphill; in the dark at the beginning.
Back to the hotel for a late breakfast and then time to rest and pack our bags.  At noon we all convened in the lobby where we split into two groups; one stayed at the hotel for rest, computer and/or card games. 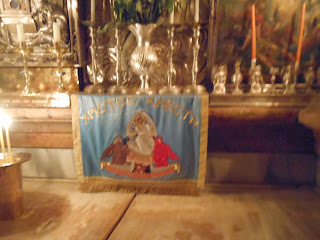 The other group went back to the Old City; some walked part of the wall and then shopped.  Another group walked back to the Church of the Holy Sepulcher and spent three hours there exploring the rest of the church.  Many Christian sects have chapels in this mammoth church that was built by the Crusaders so many years ago.

By four o’clock we were all together again on the bus and off to the Ambassador Hotel for another four hours during which we will have our farewell dinner.  Our luggage is already on the bus for our forty-five minute drive to the International airport in Tel Aviv.  Our flight leaves from there tonight; or should I say early morning as its 1:10 am when we expect to depart.
A sixteen hour flight will take us to LAX in California; arriving about 6:40 am.  Then a bus ride to home; hopefully well rested after a good night’s sleep on the airplane.  I hope that you’ve enjoyed sharing our pilgrimage to the Holy Land.  It was an unexpected growth experience for me and I think many of the others also.  I have a desire to learn more about the Bible after this trip.
I hope you enjoy the slideshow:
Posted by Martha at 7:53 AM

I enjoyed the slideshow and pictures of your travel. I can imagine what it might have felt like.

For your readers like me who have not been to the Holy Land, Fr. Mitch Pacwa SJ has written a great book called The Holy Land An Armchair Pilgrimage.

I wanted to share this prayerful and scriptural journey. You can read an excerpt here: http://j.mp/fmphlap

Merry Christmas and save travels!