Long day yesterday so I will post the story this evening....but the photos are already on line. 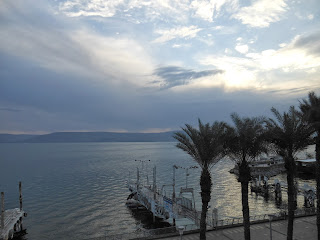 We had breakfast on the patio at 6:30 am and the sky was so clear you could easily see the hills on the other side of the Sea of Galilee; God gave us a light rain last night that washed the air!
By 8 am we were on the bus with our suitcases, we’re moving to Jerusalem today, but first we headed for the nearby Mount of Beatitudes. 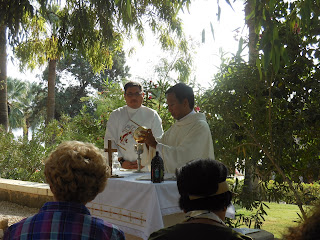 We celebrated Mass in an open air chapel with a view of the Sea of Galilee far down the hill; the same place that Jesus once sat and talked with a multitude of people that stretch all the way down to the seashore.  The miracle was that everyone could hear everything that he was saying as though they were seated next to him as his voice carried down the mountain so that everyone could him.  A beautiful church graces the spot where he sat and the gardens are designed to give you a place to spend time in contemplative reflection and prayer.  There were pilgrim groups all over the gardens.  Jim assisted with the singing for the first time and I think he enjoyed adding his voice to Roberta who has been guiding us in song since the beginning of our pilgrimage. 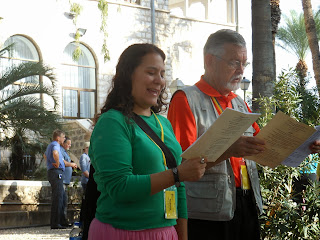 By 9:30 am we were on the bus and headed south towards Jerusalem.  We followed the shoreline all the way to the southern end of the Sea of Galilee where we first saw the Jordon River that is the source of water for this lake.  At this point it was just a narrow stream but somewhat clear.  We will be visiting the river again in a few days to renew our baptismal vows and I understand at that point it will be rather muddy.   The River Jordon enters on the south side and exits on the north end of the Sea of Galilee.  At the northern end the lake can sometimes be as much as six miles across and as I said before up to thirteen miles in length.
Soon we could see the Kingdom of Jordan across the valley and then eventually we were driving on the road near the double fences with security strips between that divides the two countries.  I’ve heard several people mention that there are few stop signs; almost all of the four way intersections are roundabouts just like in Europe.  This makes driving much easier as we don’t have so many stops, just easing in and out of the roundabout!
By 10:30 am we’d arrived at Bet She’an, a Roman Town that dates back to the fourth century B.C. that has been slowly excavated over the past eighty some years. 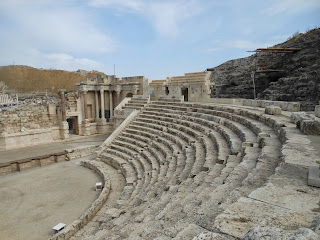 There was a wonderful iron map that helped us to see the whole picture before we actually walked done into the site to climb the theater and walk around the columns.   A few of the younger ones headed over to climb the hill that is known as the Tell, including Father Paw.  This was where the first towns were built.  Over the centuries the hill got higher and higher as one town was built on top of the previous one.   Time was short for our visit and one had to decide to climb the Tell or explore the ancient ruins.   It really wasn’t possible to do both well.   We had lots more to do today!

By 11:30 we were headed for Jericho, nearly an hour’s drive away from Bet She’an.  We crossed over the border into Palestine to reach Jericho.  We drove for miles along the double high wire fences that held mine fields along the border. 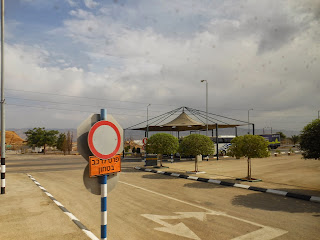 During our drive we were given a brief education about the history of the Jewish people.  Over the centuries they were ruled by Romans and then other countries but they did not have a country they could call their own.  In 135 A.D. after a three year revolt they lost; the Jews were disbursed around the world, but not in Jerusalem, by the Romans.
In 1917 the first Jews arrived from Europe into a divided Arab World.  The League of Nations created the Nation of Israel in 1948; taking land from the Palestine people to make the state.  They have been at odds ever since.  Today the population inside the old city of Jerusalem is mostly Arab Muslims, a few hundred Arab Catholics and less Jews than reside in New York City per our tour guide.   Worldwide, eighty percent of the Jews live in either Israel or the USA; split about fifty-fifty.  And I do hope that I got the information right!. 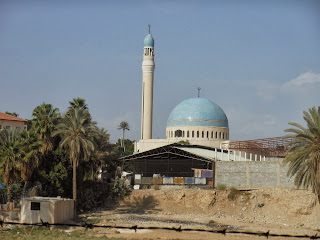 The town of Jericho is ten thousand years old and has about seventy thousand people today.  There are about five hundred Christians and approximately two hundred fifty Catholics.  We enjoyed seeing the city from the bus and then spent an hour in a very nice restaurant for lunch.  At the end of our lunch were offered an opportunity to smoke their waterpipe or Hookah.  The fellows had no problem but some of us girls, yes…including yours truly…ended up with headaches and a really bad after taste from the experience.  But lots of fun for everyone as the brave ones were cheered on to get the water churning enough to generate some smoke to blow!
After lunch we headed back into Israel for our new home for the balance of our trip, Hotel Grand Court in Jerusalem.  We arrived about 3 pm and found that one elevator is preprogramed for the Sabbath, sundown Friday to sundown Saturday, to run automatically without pushing buttons so that the Orthodox Jews can use it.   Nothing quite so frustrating as getting an elevator that has a mind of its own.  No matter what buttons you pushed it kept going up and if it was headed down there was no way to go up! 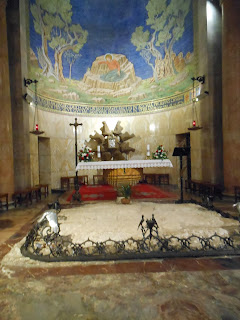 There were some funny stories when we climbed back on the bus at 4:30 pm and then Raouf explained that they were not broken and by Sunday it would be working normally.  We all had a good laugh and enjoyed our evening excursion to the Garden of Gethsemane.  This is a church built in the garden where Jesus and his disciples prayed the night before his crucifixion.  The church is over the rocky surface where history says that Jesus prayed while his disciples kept watch in the nearby Olive Garden.  We had a private hour in the church for Adoration of the Blessed Sacrament and time for reflection and prayer.  We were allowed to put our hands on the rock during our prayers.  Unfortunately our plan to walk around the ancient olive trees that date back to the time of Jesus was not to be; they locked the gates early and we were only allowed to walk around the outside of the garden.  We hope to go back later this week to visit the garden during the day.
Back to the hotel and dinner at 6:30 pm.   About an hour later we all boarded the bus for a short trip back across the border into Palestine territory to Bethlehem.  There Raouf had arranged for a store to be opened for us to shop in for an hour.  Many dollars later we headed back to the hotel with our treasures and to bed.  By the way; we’ve yet to find a need for the Shekel or Israel coin.  They accept American Dollars everywhere and even show the prices in dollars, euros and Shekels.
As you may know; I went straight to bed and this blog is a day late in arriving.  Hope you enjoy the slideshow which I did manage to post early this morning.