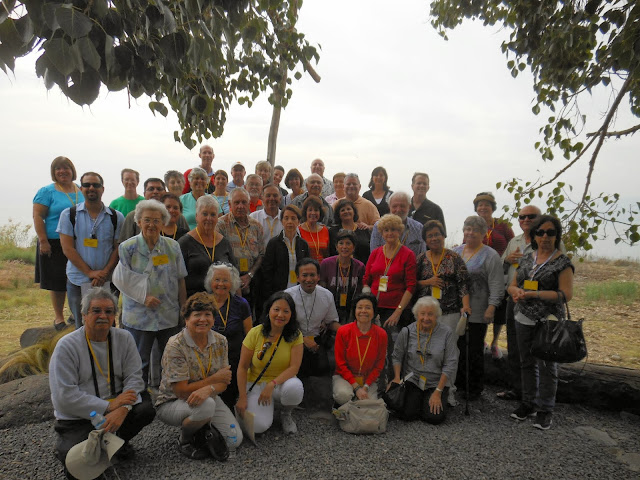 Another early morning for me; but I enjoyed reading my book while I waited for the wakeup call from the desk; then it was off to breakfast at 6:30 am.  We sat with Marlene and Richard on the patio for breakfast and enjoyed getting to know them.
By 8 am we were on the bus and headed down the road for Capernaum that is on the northern tip of the Sea of Galilee. 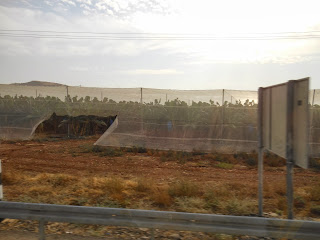 Along the way we had views of the lake and also the banana plantations that cover acres of ground in this area; Raouf explained that they bag the bananas while on the tree to prevent bugs from entering the fruit and also for those that are being shipped internationally they spread mosquito netting over the entire field to prevent the mosquito from reaching the fruit.

By 8:30 am we’d arrived at Capernaum, the town where Peter lived and within which Jesus made his base of operations for his Galilean ministry.  This site has been partially restored by the Franciscan Monks who also have a Monastery on the land.  Nazareth did not want a prophet in their town and asked Jesus to leave.  Peter offered to let him stay in an upstairs room in his mother-in-law’s house in Capernaum; thus Jesus focused his ministry here, where ancient Judaism flourished. 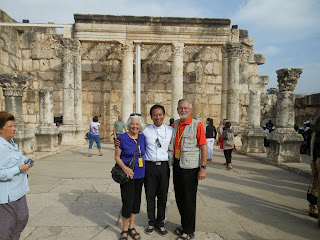 He performed many of his miracles while he lived in this town.  The partially restored Synagogue has been dated back to the time of Jesus and therefore he would have worshiped and taught in this building.

The home of Peter’s mother-in-law has been protected by several different types of structures over the years.  Today is has a very modern church over the site.  This site, along with many others are still being discovered as new building are constructed.  First, they are required to excavate and search for possible ruins before starting to build here in Israel.
Jesus was the tenth man considered to be the Messiah; the previous nine had died prior to 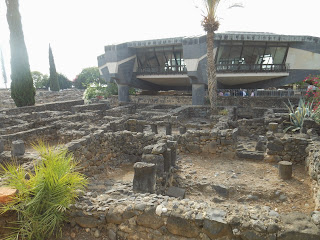 Jesus without proving they were actually the Messiah.  Even today; there is almost always a man who the Jewish people believe is the Messiah; so far none of them have proven their claim without a doubt.  So, the search continues for the person they feel will save the world from eternal damnation.

There were several reasons that Jesus chose this area other than the fact that he was offered shelter by Peter; and the fact that his friends Peter, James, John, Andrew and Matthew all lived in this town.  The area was a land of the shadow of death, they were persecuted and held little hope for salvation as they waited for their Messiah.  It was also on the trade route which allowed Jesus to make contact with the gentiles coming along on the road such as the Centurion. 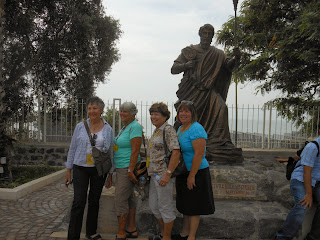 There is a larger than life statue of St. Matthew with the Sea of Galilee behind him; we all enjoyed taking photos with Matthew before leaving this site by bus.
We climbed back aboard the bus for a visit to Tabgha; the Benedictine Monastery located on the land where Jesus fed the multitudes of people. This is the only miracle that is mentioned in all four of the Books of the New Testament.  We walked directly to the edge overlooking the Sea of Galilee and celebrated our Mass today.  Deacon Joe assisted Father Paw and we all participated by readings and singing.  It’s always a beautiful experience and brings us each closer to God as we attend daily Mass during our Pilgrimage to the Holy Land. 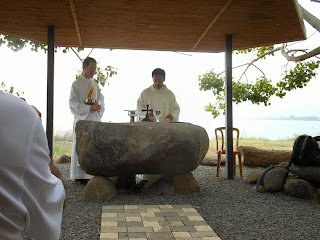 After Mass we took a group photo and then walked back to visit the church that the Monks have built over the rock that is said to be the place where Jesus fed the multitude with five loaves and two fish.   The rock jutes out of the floor below the Altar in the sanctuary.

When they began restoring the site they actually found the original mosaic floors from a previous church that they have partially restored and left them as the flooring in the new church.
Back on the bus again we drove the short distance to visit St. Peter’s Primacy where a church is built over the rocks where Jesus stood when he talked to the apostles in their boat and told them where to catch the fish.  This was after he was resurrected.   A huge portion of the rock fills the sanctuary and even more of the rock is outside of the building. 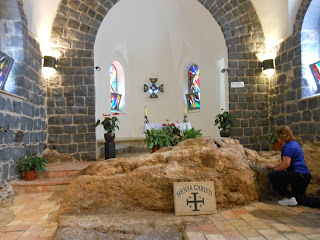 This site has been visited both by Pope Paul VI and Pope John Paul II; and a beautiful open air chapel has been built and dedicated to each.  It is rumored that a new chapel will be built soon as they expect Pope Francis I to visit the site within a few years.
We took time here to wade in the waters of the Sea of Galilee; tepid water with sharp lava rocks to walk on but worth the pain to be able to say we have walked in the waters of the Sea of Galilee.  We dried off our feet and walked back up to the bus.   Our next stop was at a very large restaurant that caters to groups.  Expensive but good food.  Choice of fish with bones, fish without bones or chicken. 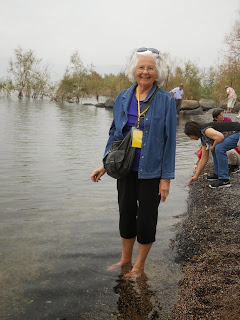 By two o’clock we’d arrived at a Museum that featured a beautiful walk way that was decorated with art created by Arab and Jewish children.   We didn’t visit the inside of the museum but instead walked the length of the art display that lead us to the boat dock and a large wooden boat.
We motored for nearly an hour while enjoying the breeze out on the water.  Raouf read stories to us from the bible about miracles and life on the Sea of Galilee for part of the time and then they taught us a Jewish dance after they’d played some dance music and only Jim and I danced.  They ended with a slow dance and there were two couples on the floor for that one.  A fun afternoon and some of the ladies enjoyed shopping for some trinkets that they had for sale.  A fun side note was that at the beginning of the trip they raised the American Flag and we all stood and sang God Bless America during the ceremony.
We practiced our hymns for tomorrow morning’s Mass on the way home, arriving a bit earlier than usual.  WiFi has been very slow here at this hotel and while we were gone today they reset the whole system and it suddenly works very well this evening.  But, until you asked the desk about the problems of getting on the system; you didn’t know!   Dinner at 7 pm and then a walk along the Boardwalk in front of the hotel.  We tried the lemon gelato that was very good. 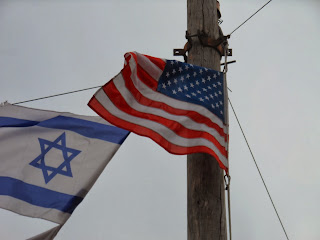 Piece of information; Tiberias was the place that most of the French and Russian Jews settled in after WW II.  Therefore, this is a very Jewish city and our hotel only serves Kosher Foods.  So you will find no meat at breakfast and no milk products at dinner.  Desserts are made with soy milk.  But the food was excellent and I loved all of the vegetables.  Definitely no pork anytime!
Tomorrow we have another early morning and arrive at our new hotel in Jerusalem after a day of touring.  Hope you enjoy the slideshow:
Posted by Martha at 12:07 PM