Yes, we're off on another adventure:  A month in Paris that will include both of our birthdays, Christmas and New Years Eve.  Plus another couple of weeks to just enjoy our favorite city!

Plans were made six months ago and we're finally here.  We left on Tuesday afternoon from LAX. 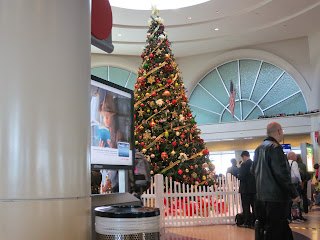 The journey began with a short trip from 4:15 pm to Phoenix on one of those "puddle jumpers" as we like to call them.  The overhead baggage storage was so small, none of our carryon bags would fit so we had to stuff them under the seat in front of us and hid one under my legs; actually, Jim's backpack did fit and we put our heavy coats up there also.  This Christmas tree was at LAX with a train circling on the overhead rails.

The flight from Phoenix was delayed for nearly an hour but they made that time up on the way to London.  Jim and I both took sleeping pills and slept six hours during the flight.  But there was another plane at the docking port and we waited on the tarmac for nearly an hour.  By the time we arrived inside the terminal we'd missed our connection for our flight to Paris.  British Air did a good job of getting us on another flight at 8 pm.  They also called Paris for us so that we could talk to the apartment management company to rearrange our checkin for the apartment. 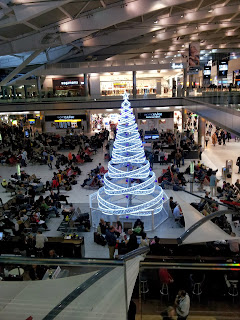 We used the twenty pound vouchers from BA for some food and settled in for the four hour wait for our flight.   Not sure why but I'd packed an English adapter plug in my carryon luggage; I must have had a premonition that I would spend some hours in England.  These two trees are from Heathrow.

By the time we boarded...another "puddle jumper" it was raining pretty good.  Managed to get both roller bags in the overhead but still had backpacks under our feet because there was not a seat to spare and the bins were full.  We were second from the back and did not enjoy the rock and roll take off and then landing in stormy weather; but happy to arrive in Paris at 10:30 pm. 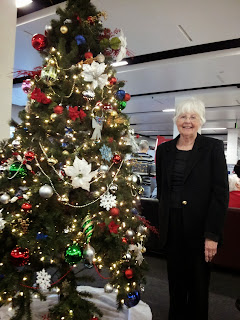 Skies were clear but very windy in Paris and cold.  We'd arranged a driver  because of the late arrival...5:30 pm...but he was still there waiting for us when we arrived.  Best money I've ever spent.  Can't imagine getting on the metro at 11 pm with luggage.

He gave us a wonderful tour of the highlights of the Christmas lights as we traveled into and across Paris to our apartment in the sixth arrondissement.   He'd also called the lady who was meeting us from the management company and she was at the apartment and would wait for us.  The French are wonderful people.  We'd been told that 11 pm was the absolute latest you could check in.  It was nearly 1 am by the time we finished everything and she was out the door!  By this time it had started to rain.  We unpacked and tucked into bed by 2 am.  Took sleeping pills and woke at noon on Thursday.

About 2 pm we headed out the door for the telephone shop to add time to our French cell phones and then to the Carefour Grocery Store to stock our kitchen. 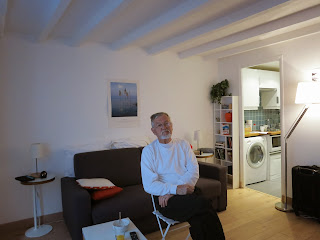 We ate a late lunch after returning and then about six pm we headed out for a walk.  We are about a block from the Seine River on the left bank.   We continued walking for about six blocks to the d'Orsey Museum before turning around and returning to the apartment.  It was dry but cold outside.

Jim fixed a wonderful pasta dinner in our kitchen, I did the clean-up and then we've just been relaxing and enjoying the evening.  The Internet wifi is excellent and Jim has got more channels than ever before in hotels and/or apartments.  And, our street is full of art galleries!   It's going to be a lovely time in Paris. 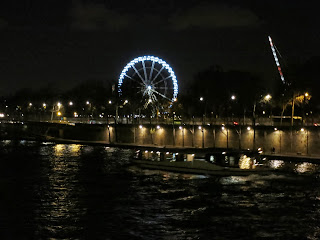 No slideshow tonight, just a few photos in the story for you.  I may not post every day but will probably post several times a week at least.   I hope you enjoy our final trip for 2013.

Changed my mind,...here is a slide show: