We slept in again this morning.   Jim is already worrying about the Christmas decorations that have to be put up after we arrive home next week.  It’s giving him sleepless nights.  Me….sleeping like a baby except for the scratching of my seventeen bites from Machu Picchu.   Jim doesn’t have a one!   If you go and are prone to bites remember to use lots of preventive lotion!

Our quest today was to visit the Inka Museum that is only a block up the hill off of the square.  We decided to play a game of Hand and Foot cards before going so it was after eleven o’clock before we left the hotel. 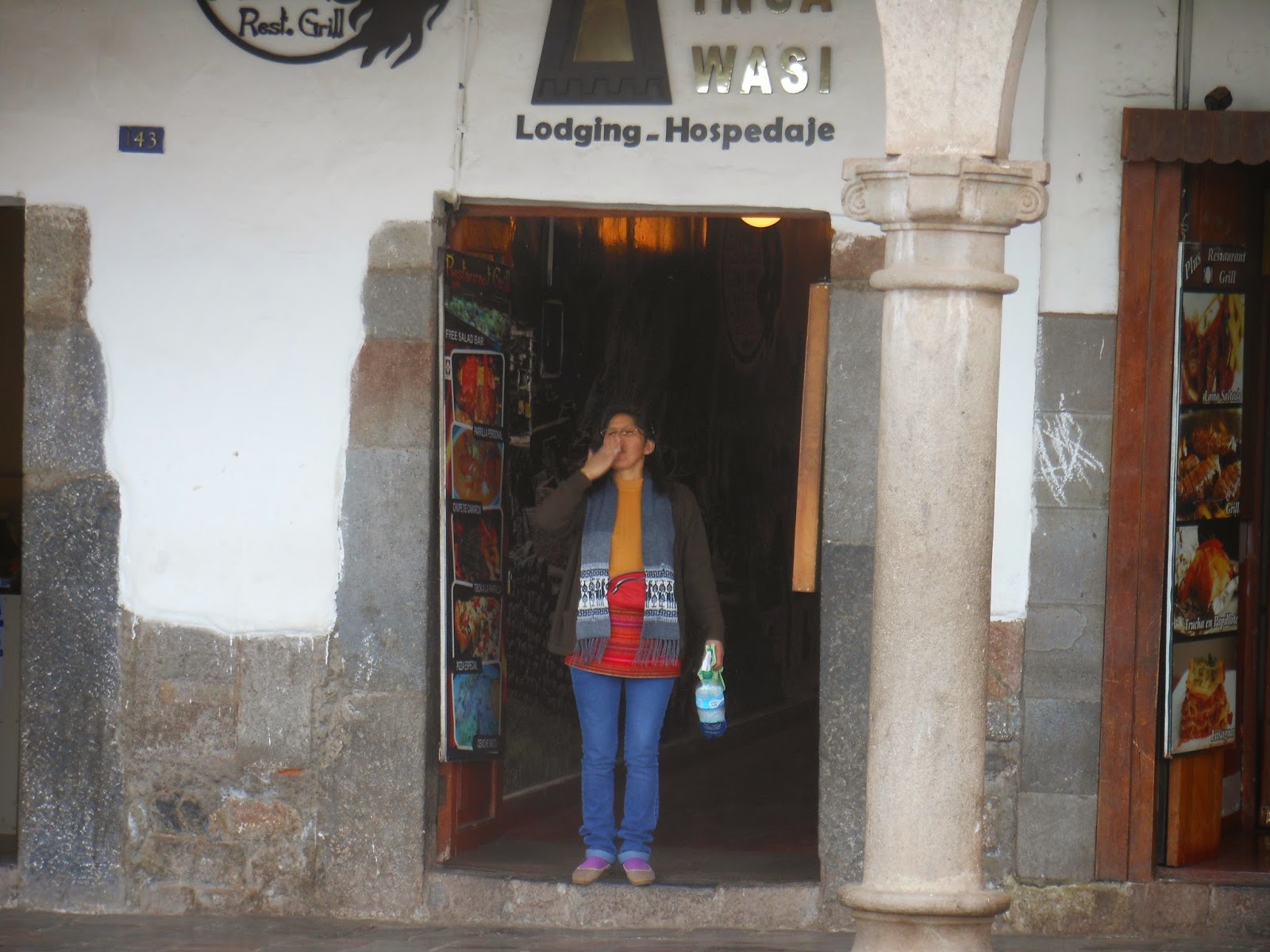 Our wonderful clerk stood at the door and waved goodbye to us as we started off.

The first thing we noticed was that it was a beautiful cloudy day; and secondly that there was no traffic on the street!   We looked over to the Cathedral and saw hundreds of people attending a political rally.  We’d seen about ten vans full of people arriving last night with police escorts during our dinner; but later didn’t see anything happening.  I guess they all stayed the night in preparation for today’s event.  There is an election coming up soon and we’ve seen many posters and other events while we’ve been here but this is definitely the biggest yet!   Yury told us this evening that the election is scheduled for December 4th. 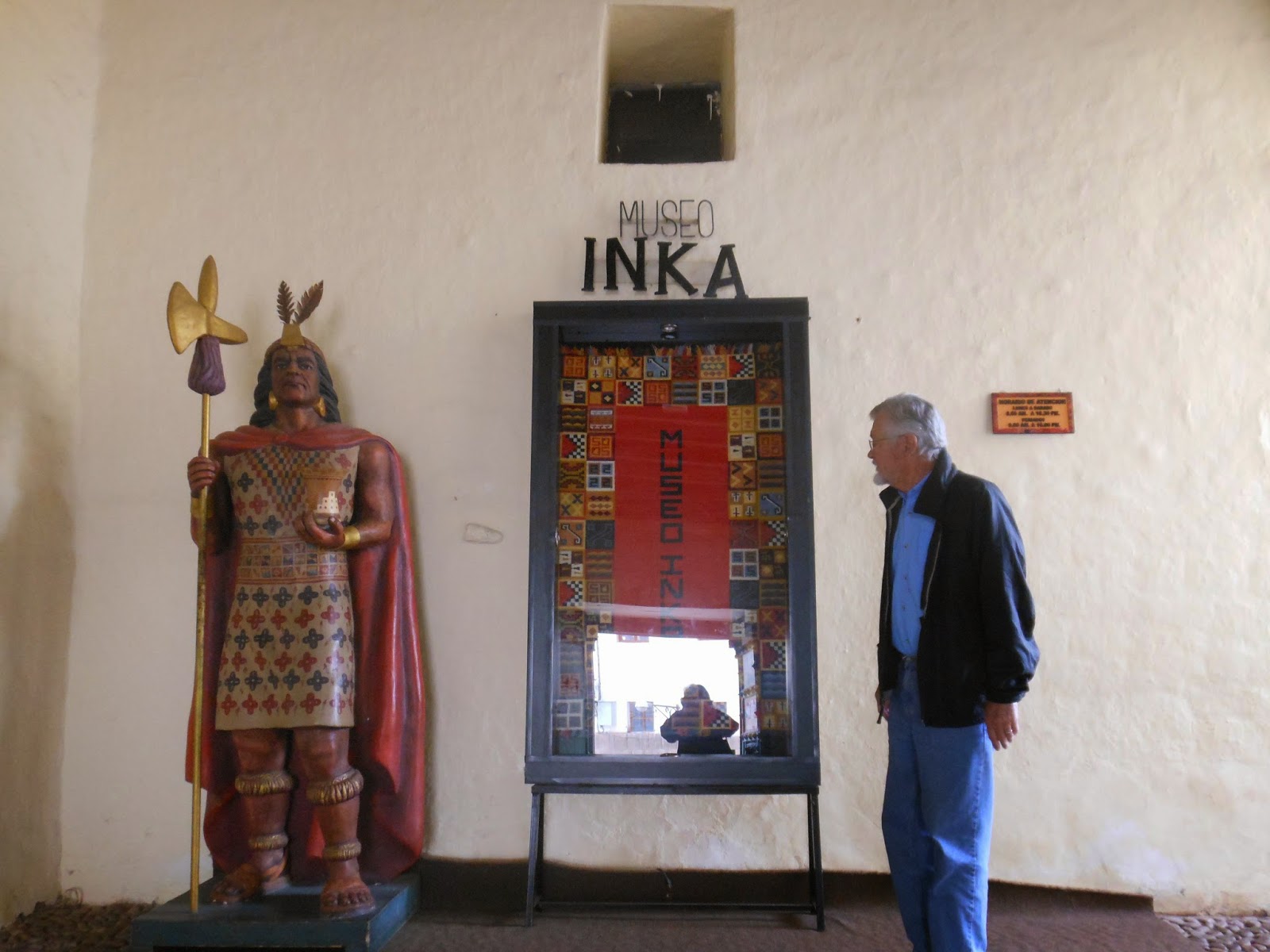 Soon we walked up the hill to the Inka Museum; the single lane street was void of traffic so that made the walk up easy.  The building has been there for many years.  There was a large photo of a professor visiting this same building back in 1925 so it’s been a museum for a long time.  Jim said that Hiram Bingham had removed many artifacts from Peru when he was here in the early twentieth century and they had remained at Yale University until 2007 when they was returned to Peru.  Many of these items are in this Museum.

The exhibit was very impressive and took us over an hour to visit.  Again, it was in a building with a central courtyard and I was allowed to take photos there.  Several artisans were busy in the courtyard with weaving and painting.    We purchased a very small gourd that had been carved by hand. 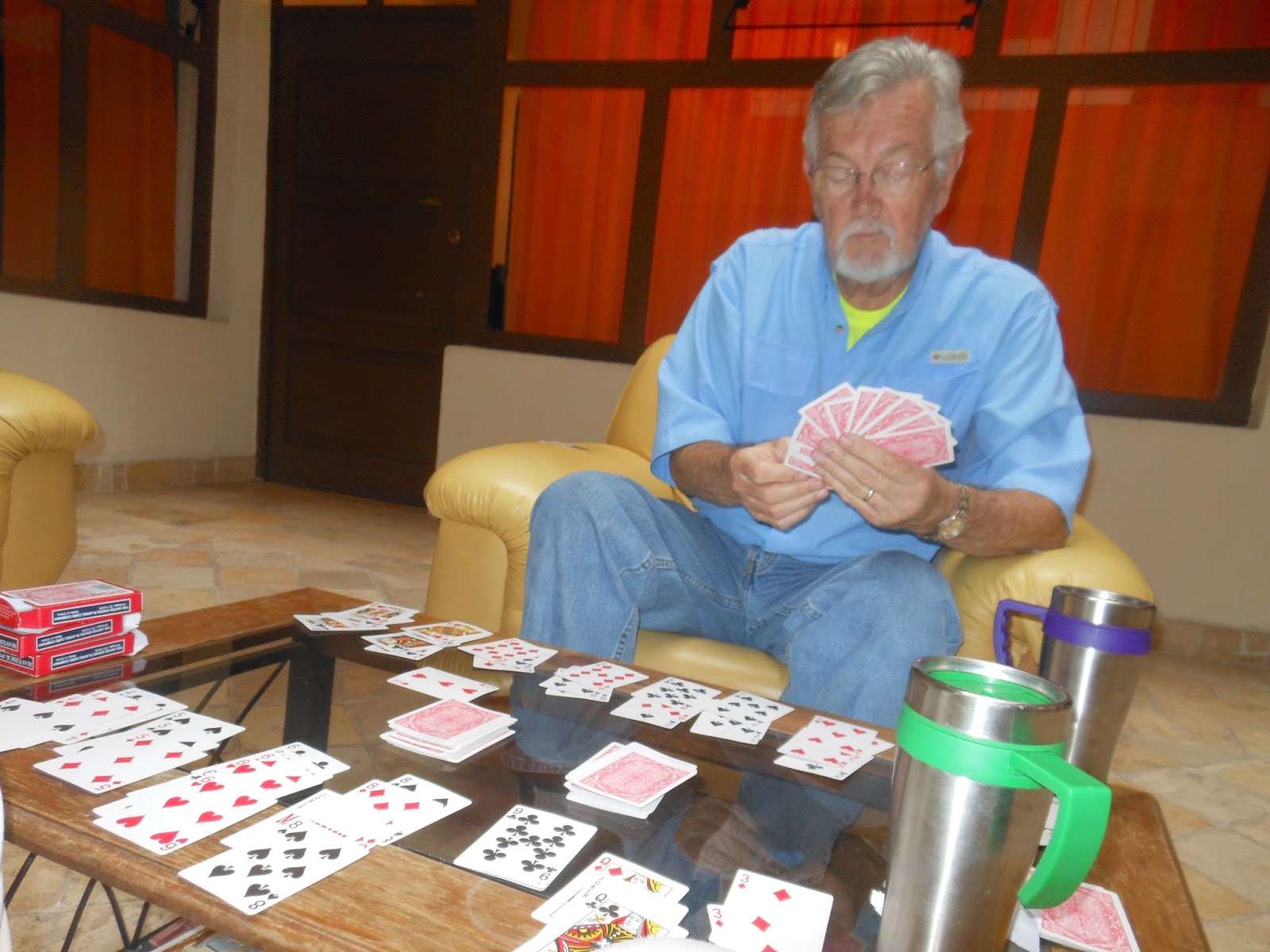 We walked up to the small plaza where the expensive hotels are located to check out the restaurant that we tried to go to last night.  The clerk at the hotel said it was closed for remodeling.  But, while Jim checked that out I started viewing paintings by a young man who is in his fourth year of art school; they were beautiful and very tempting but we managed to break away and head back down towards the hotel where we played another game of cards while we caught our breath.   So the score today was even; we each won a game.

Back to our room where we worked on our computers until 5:30 pm and then we went out for dinner.  We walked to the restaurant that Jim had found on Trip Advisor.  Oops….not open until 6:30 pm; that’s a first since we’ve arrived! 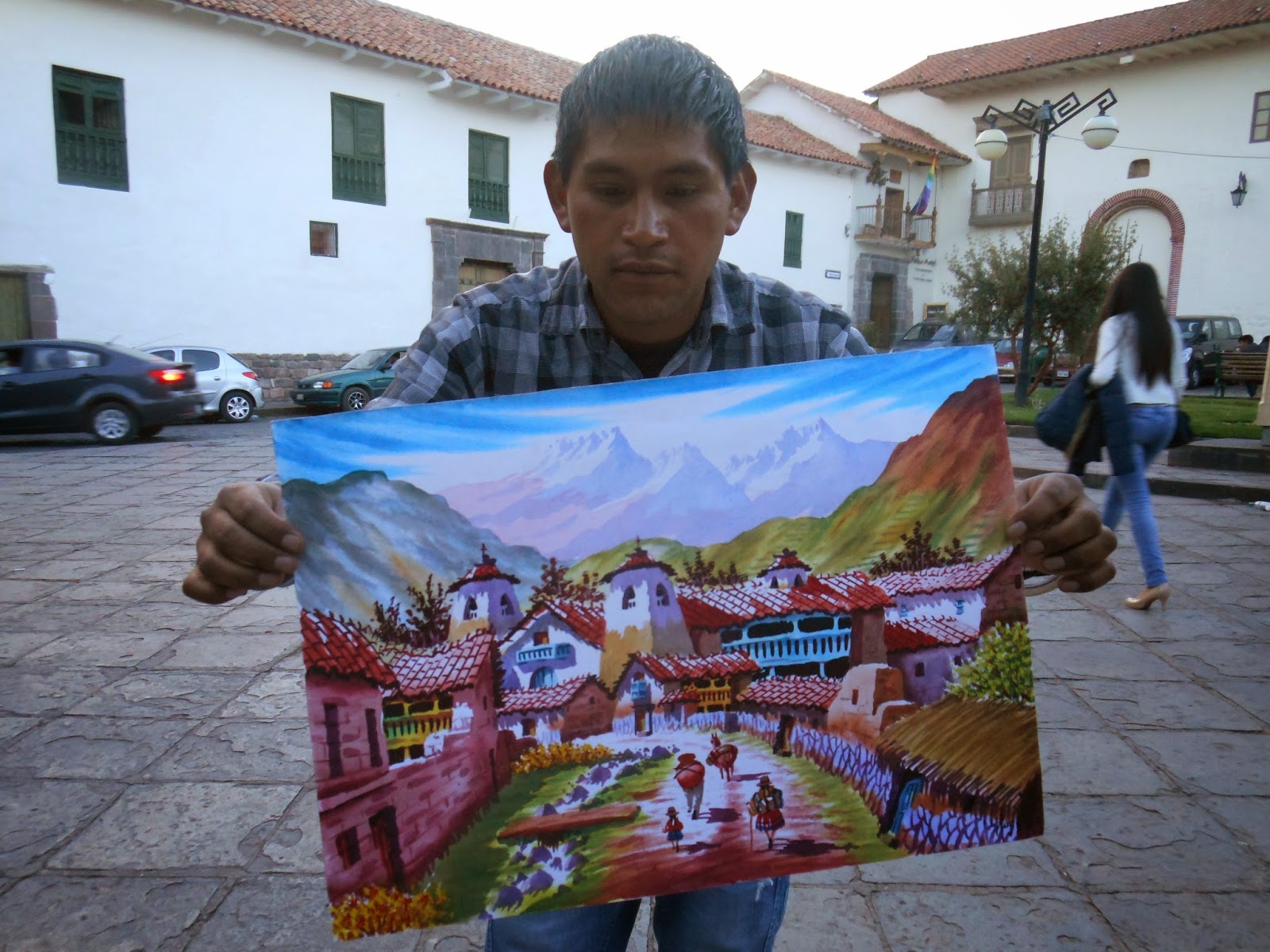 By this time we’d agreed that we’d really like to purchase a painting from the young artist that we’d met in the square this afternoon.  So up the hill we trudged and sure enough he was still there in the plaza with his paintings.   We chose a watercolor painting of a Peruvian village.  Back to the hotel where we were happy to see the manager Yury.   Had a nice talk with him and he assured me that I’d be able to eat a Cuy by myself.   As we were leaving there were fireworks being shot into the air along with the firecrackers in the plaza.  Lots of excitement and political speeches still be given in front of the Cathedral. 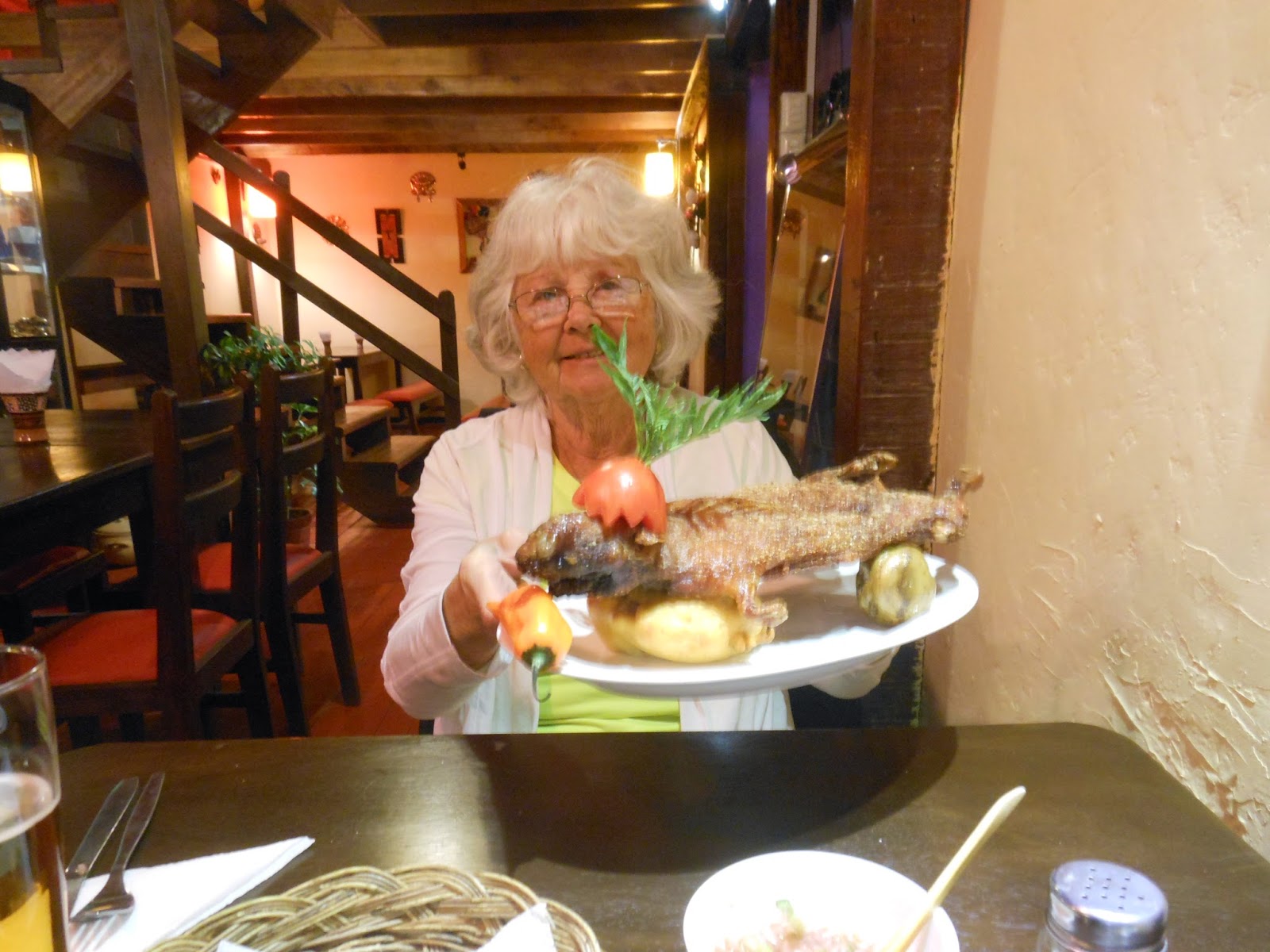 Back to the SumaQcha Restaurant where we were greeted and shown to a table.   There the waiter explained that the whole Cuy would be brought out for photos and then taken back to the kitchen and prepared for me to eat.  Much like eating chicken; in fact they encouraged me to eat it with my fingers but I ended up using a knife and fork as it was easier.   Very tasty…I had it fried (Cuy Chactado) as that method was only half an hour to prepare; if it was baked it would take an hour as all Cuy is prepared fresh after it is ordered.   I had a stuffed green pepper that was breaded and baked along with several black Peruvian potatoes.   We shared a large beer and Jim enjoyed a plate of chicken and beef on skewers.

Delicious dinner and about double the price that we generally pay; the Cuy was S/60.00 (about $20.00) but it is the national delicacy of Peru and now I’ve enjoyed a meal of it while in Peru.   We decided to walk a bit and headed up one narrow shopping street and then back down in front of the Cathedral to watch the political rally that was still happening.   There were two old vehicles; both model A Fords from the 1920’s.   I managed to get a photo of one for the slideshow.

Back in the hotel by eight o’clock; I think this was our latest night out in Peru.  I hope you’ve enjoyed our day and below you’ll find the slideshow.  Remember…if you click on the slideshow it will take you to the larger version in Picasa.