We had a leisurely start to the day with a late breakfast and then a slow walk over to the Tourist Galleries that we’d found on the Internet last night.  There we finally got smart and purchased the ten day pass for sixteen different sites and museums in this area.  Of course….none of the churches are included.  Back to the hotel where we ordered a taxi to visit the first of our planned excursions:  Saqsaywaman also spelled Sacsayhuaman. 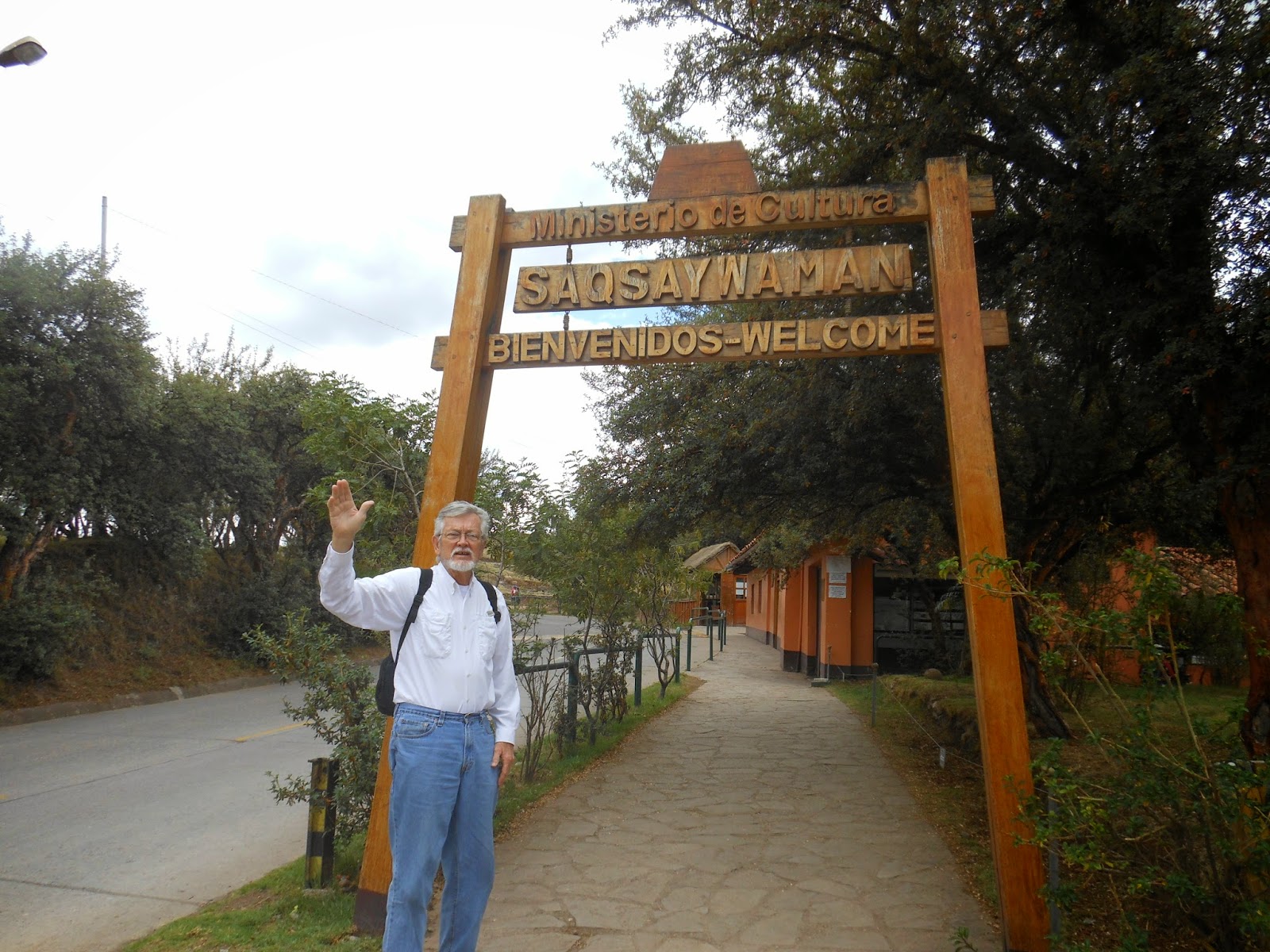 It is only a mile from our hotel but straight up.   The clerk told us that the taxi should charge us between eight and ten sols (3:1) about $3.00 for the ride.  When we got in and asked the driver he quickly showed us the chart that said S/.20.  We said “no, the hotel said ……”.  He said “how about fifteen”, Jim put his hand on the door handle and said “no, ten.”   The driver smiled and agreed. 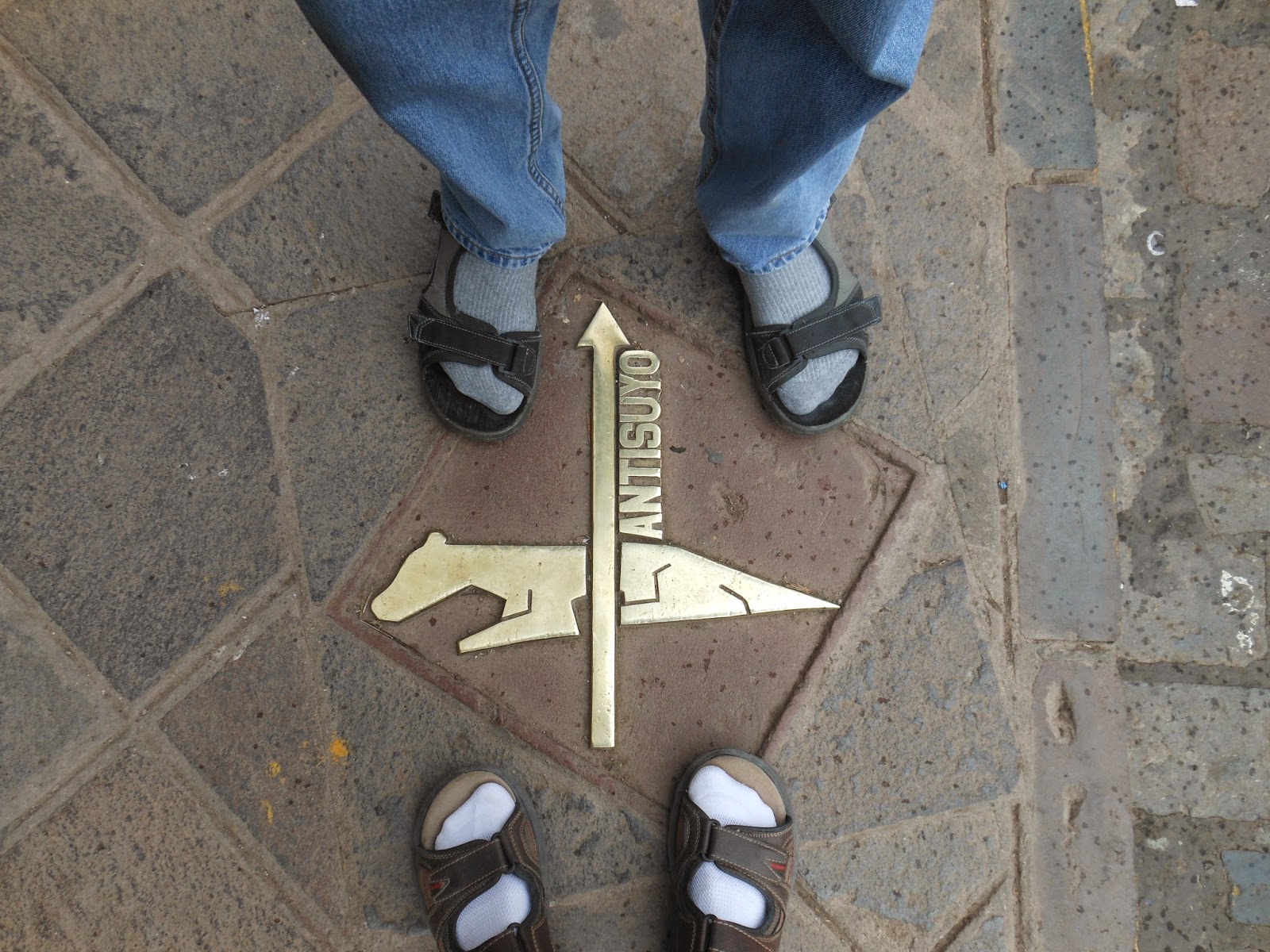 It was nearly three miles by the taxi route and I was beginning to wonder about our plan to walk back to the hotel after viewing the site.   But he delivered us as promised at the top of the site.   To further explain where this site is located; think of the reclining body of a Jaguar.   The head is the outline of the Saqsaywaman site and the body is the city of Cusco.  We were dropped off at the nose.  Unfortunately, the great lights on the site at night are not visible from the historical center where we are staying.  We can only see the cross and a huge statue of Jesus that stand on the site from our hotel.  By the way….the name is pronounced “sexy woman” or something like that. 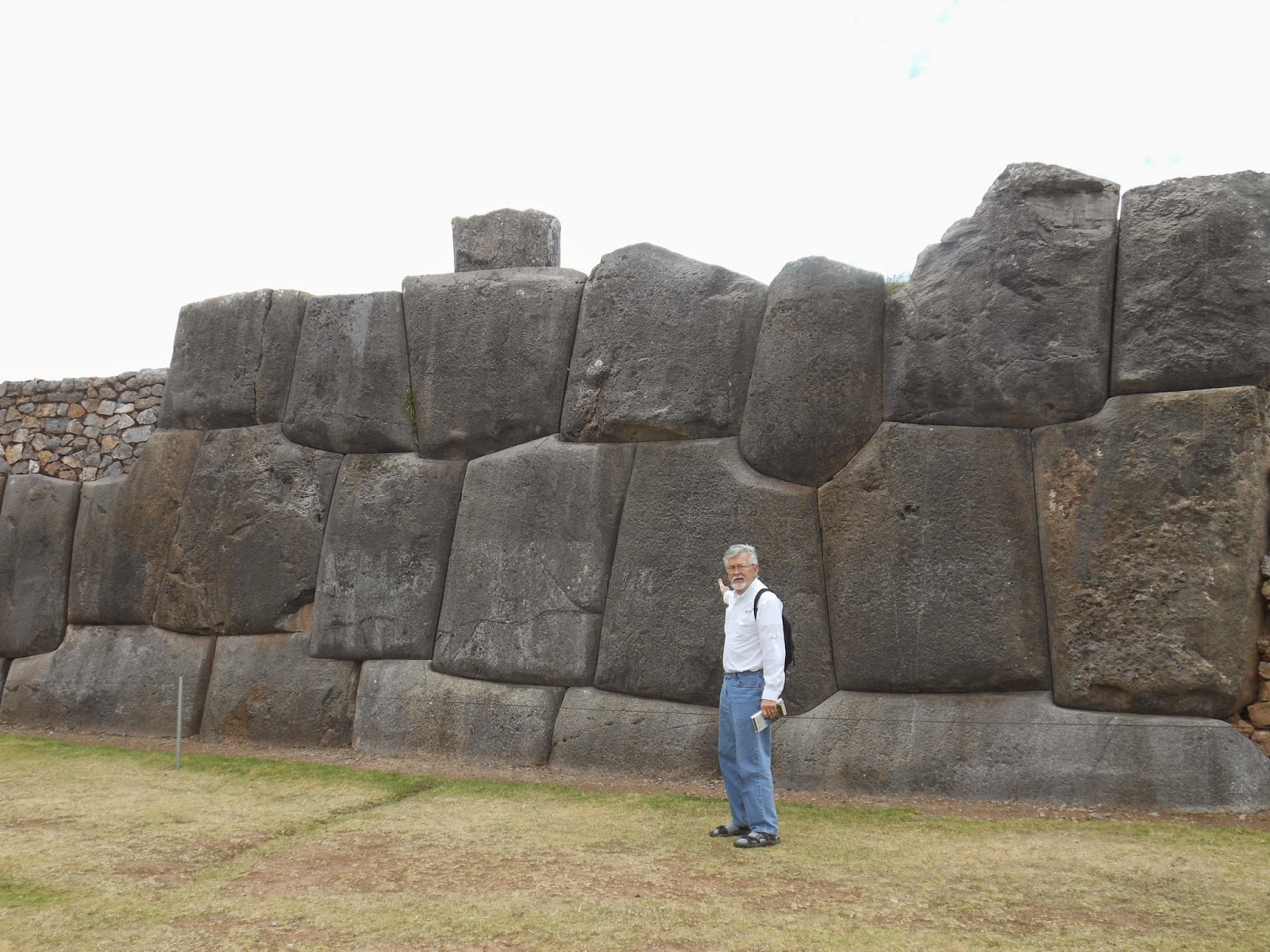 Saqsaywaman is an impressive example of Inca military architecture.   They used enormous granite stones, some as high as seventeen feet and weighing as much as three hundred fifty tons, to create three large terraces overlapping in a zigzag fashion stretching about nine hundred eighty five feet.  Remember that Saqsaywaman is the head; these ramparts were the teeth.   Thousands of Indians were used to create this fort by the Incas during the fourteenth and fifteenth century.  They had not invented the wheel and so everything was either carried or drug.   It was also a temple devoted to the worship of the sun. 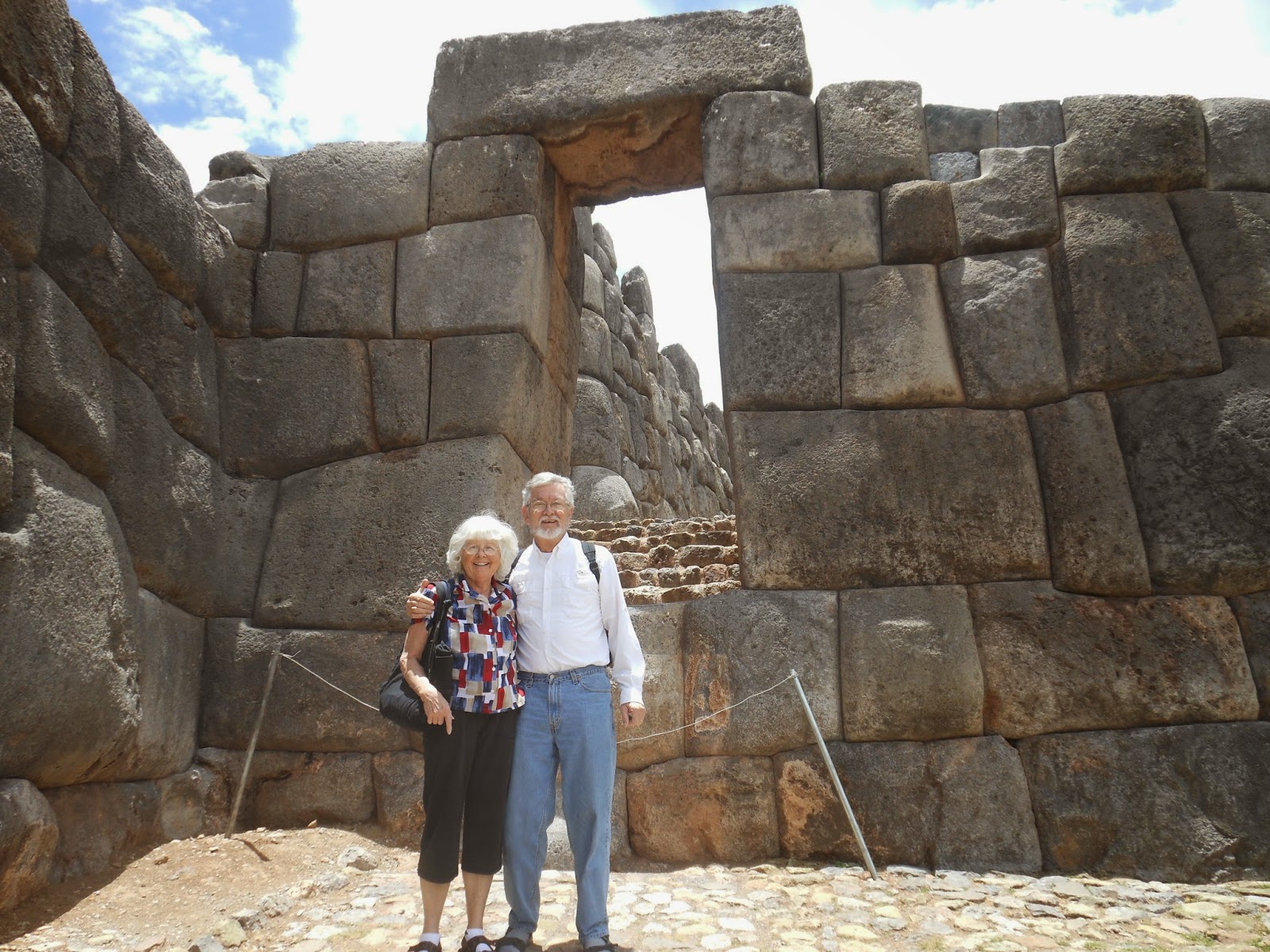 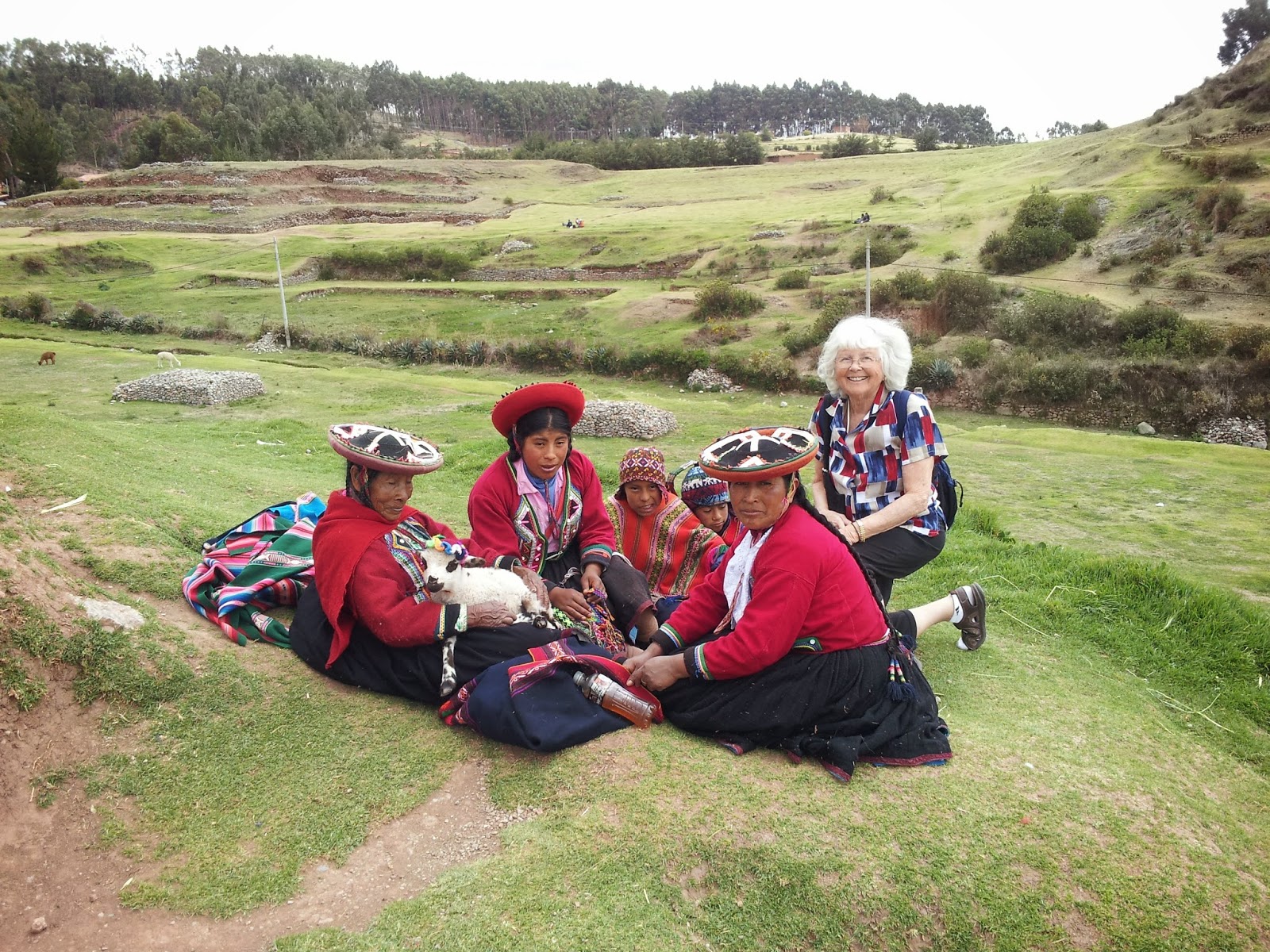 As we neared the lower end of the site we found the traditionally dressed women and children with the llama waiting for photos.   I offered a new one dollar bill and they loved me!  I was allowed to take all the photos I wanted.   We then made the decision to walk down to the hotel.    The very narrow streets heading down were lined with stones and at times very slippery.   Especially because we were getting light sprinkles on and off all morning.  About half way down we heard more of the firecrackers that we’d been hearing all morning.  Apparently today is the feast day of St. Cecilia and is celebrated by all the churches in Peru with religious parades.  As we rounded a corner we saw San Cristobal Church with a parade coming out the door.   The statute was being carried aloft followed by the band and the people.  Strewn around the huge crucifix in the yard of the church were the remains of the firecrackers.  A serendipity experience that we would have missed if we taken a taxi!
The ten minute walk of a mile that we were told about took us old folks about forty-five minutes but we managed to enjoy the walk down.  We entered the Plaza right next to the Basilica.   The rain drops were beginning to increase so we headed for the hotel and a rest. 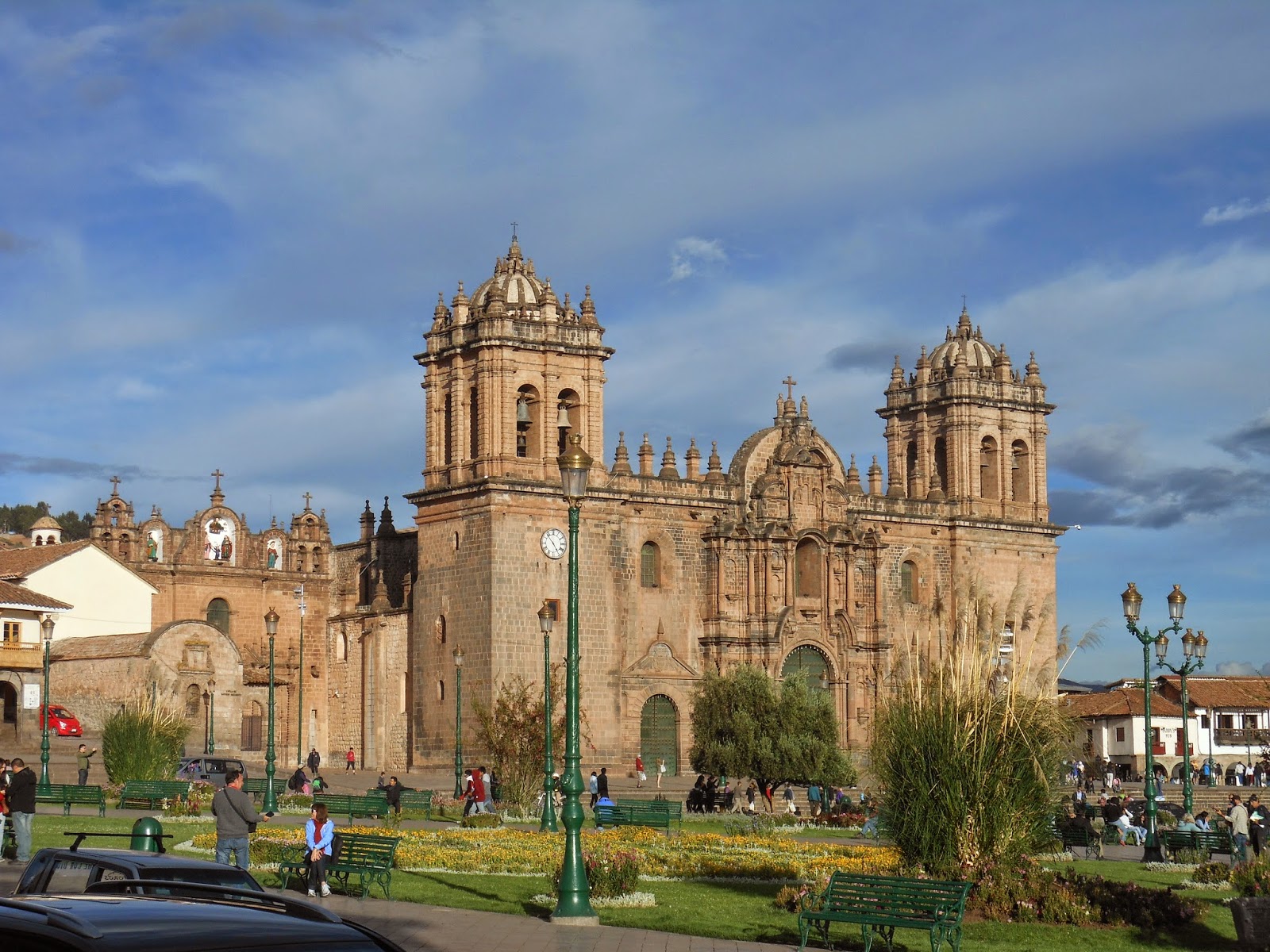 Soon we were up and ready to go again.  We walked over the Basilica, paid our fee of S/.30 ($10.00) and started a two hour tour.  As part of the fee we had a beautiful tablet computer with two sets of headphones that kept us tethered together for our tour.   Beautifully presented with photos and wonderful narration including music as we stood next to the organs that were original.  They did not play for a hundred years and the French restored them for the church so that today; on very special occasions, people can hear the beautiful music inside of this grand church.   Most of the altars go up to the ceilings and are gilded in twenty-two caret gold.  The main altar is gilded in silver.   The statues are dressed in jewels and exquisite materials.   Mirrors are used extensively as the Incas believed the reflection would be beautiful if you were a good person; the mirror reflected your soul.
The building of this Basilica was begun in 1540; three major earthquakes have severally damaged the building over the years:  1650, 1950 and 1986.  There are three buildings combined; the main church was built over an ancient Inca Temple and took one hundred years to complete.  It is attached to the El Triunfo on the right, the first Spanish Church to be built in Cusco.  Later the third building on the left was added and dedicated to the Holy Family.  Unfortunately photos are not allowed inside so I only managed to sneak a couple for you.
From there we dodged the raindrops and walked a block to the Basilica Museum to view the religious art and artifacts displayed in the home built for the Archbishop of Cusco many years ago.
Time to freshen up and then we enjoyed another wonderful meal at one of our favorites:  Plus Restaurant where we had pizza on last Wednesday.  Tonight I had another pizza but this one was vegetables and Alpaca meat, a member of the Llama family.   It was very tasty, somewhat chewy but delicious.
After dinner we walked to the Inca Rail office on the Plaza and purchased our train tickets for our adventure next Tuesday to Machu Picchu.  Now all we have to do is get up by six o’clock to have breakfast and get to the bus station in time for the two hour ride to Ollantaytambo to catch the train.  As we left the Inca Rail Office the sun came out and the lite the churches so beautifully that I snapped more photos.  Best ever and one of them is above; both are in the slideshow.
I do hope you enjoy the photos in the slide show below.