Visiting the Ruins and climbing the mountain at Machu Picchu 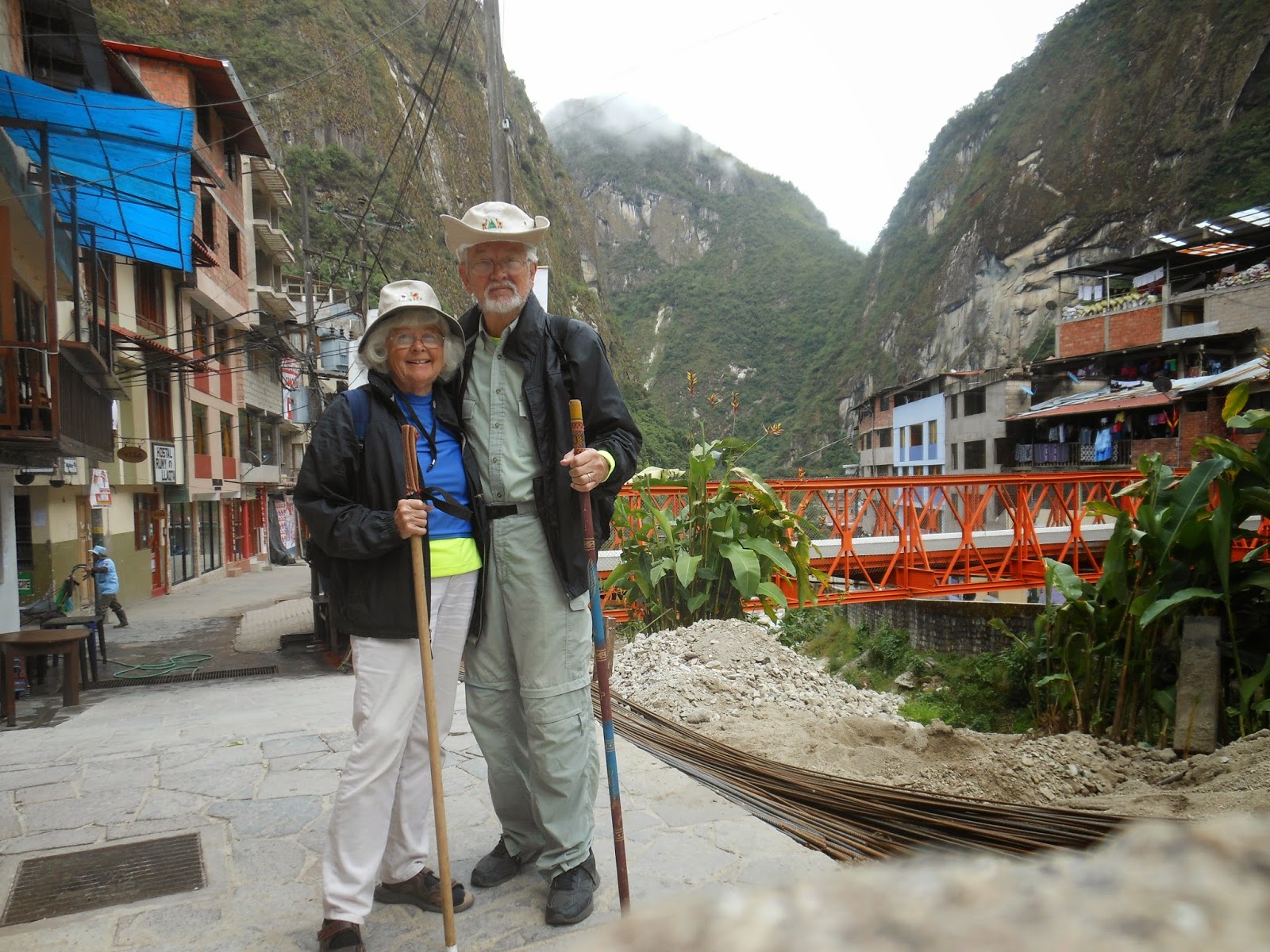 Our trip to the not quite lost city of the Inca’s:  Machu Picchu was successful today.  The Spanish never knew about this city when they arrived because it was buried by the jungle until Hiram Bingham discovered it in 1910.   The Incas abandoned the site because Pachacuti, the Inca Ruler who built the village high up on the mountain, died from Smallpox along with many of his family and other royal followers.  Smallpox spread throughout Peru when it was introduced as one of many diseases by the Spanish conquistadors when they arrived from Europe.   Machu Picchu was a royal retreat that the lower classes knew nothing about and by the time the Spanish arrived in this area; it was forgotten and covered by the jungle high in the mountains.

Before I begin our day let me say to Leslie in Oregon and my old friend Susan from Virginia…thanks so much for adding a comment to let me know that you are enjoying my blogs.  Check the day you commented for a personal response.  It’s always fun to know that people are enjoying the blogs.

Our day began very early this morning as we ate breakfast before seven o’clock and got on the bus about 7:15 am.   It was a bouncing twenty-five minute ride up the mountain, around hairpin curves that sometimes put you right on the edge of a straight drop if you dared to look down…all the way to the entrance to the Park that is slowly restoring many of the buildings in this ancient village high in the mountains.

By 8:30 am we were checked through the gates, having to show our tickets that we purchased four months ago on the Internet, and our passports.   We actually got a stamp in our passport book when we left later in the afternoon.

The only facilities are at the entrance and we made use of them.  Jim had a touch of King Pachauit’s Revenge just before we started our walk through the ruins.   Fortunately we were still at the restrooms; but it definitely affected the rest of our day. 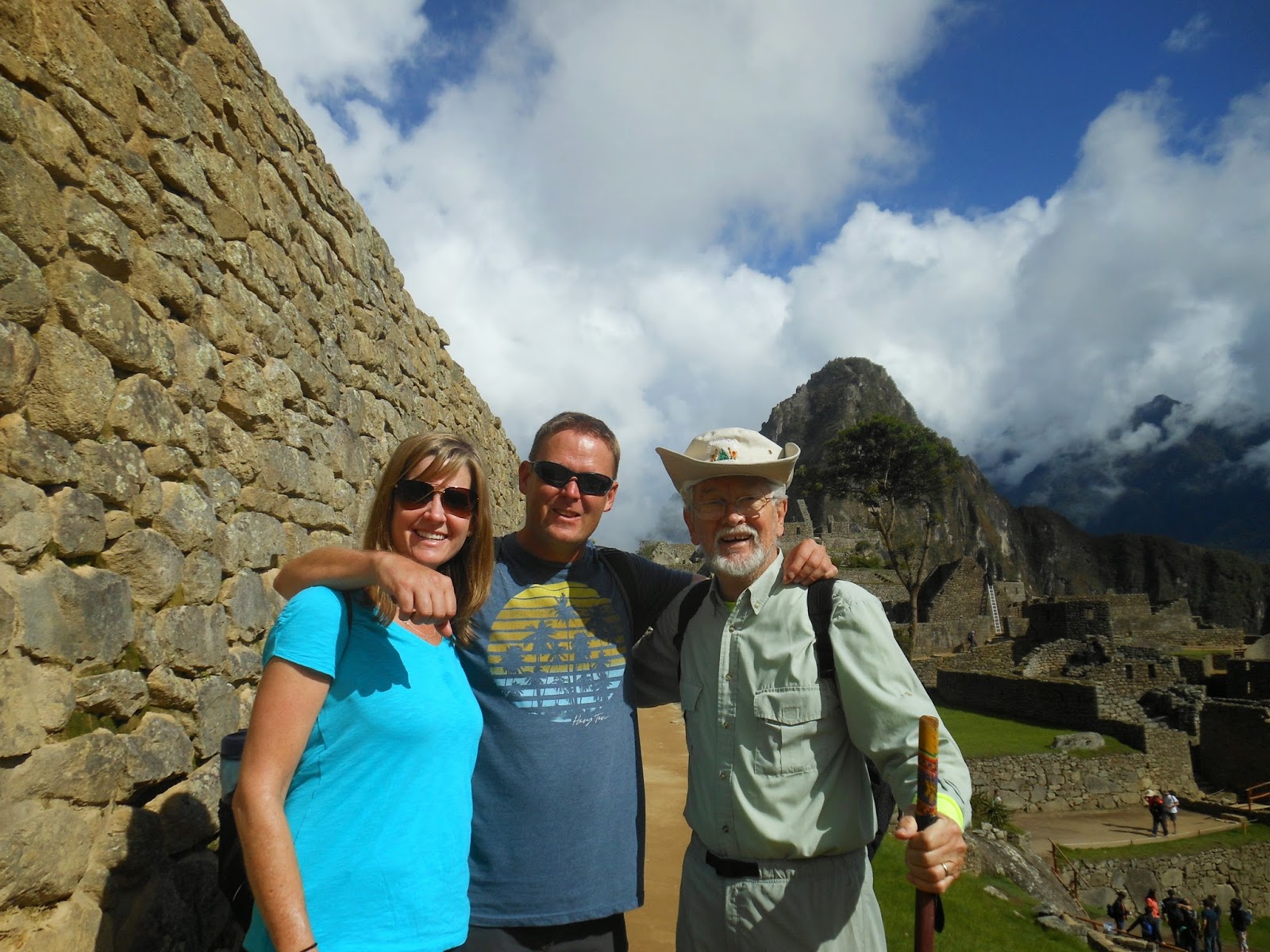 We took the next hour to stroll up and down the steps and paths through the village that is slowly being restored by workers so that you can get a real feel for the houses other than just foundation ruins.   During our walk we met Paul and Colleen from the train ride yesterday; they were just heading out after having arrived at seven am for the climb up the mountain.  Our tickets gave us the entrance to hike up the Waynapucchi Mountain also.  Thousands of visitors arrive each day to visit this park; but only four hundred can climb the mountain.  There is a second larger mountain behind the village which you can climb also but it is much higher and a longer hike.  They allow two hundred people on the mountain between seven am and ten am.  Then at ten am another two hundred are allowed to enter.  Everyone has to be off of the mountain by one o’clock. 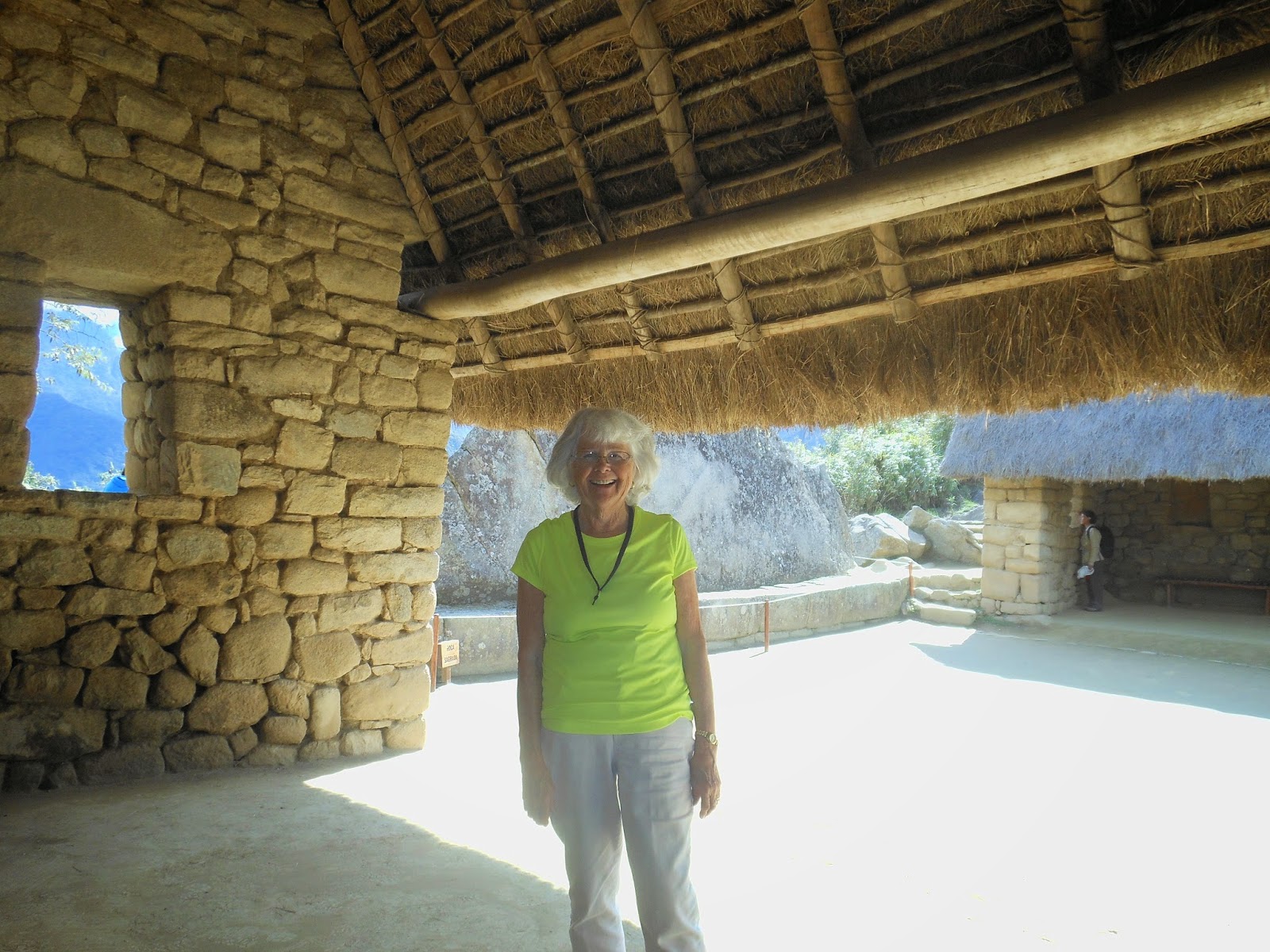 Our entrance time was at ten o’clock so we had a nice rest outside of the entrance to the trail for nearly an hour before hiking up.  During that time we each removed one of our two shirts that we had on.  We’d expected possible rain according to the weather report but the sun was shining and it was hot.  I was tempted to leave the short sleeved shirt on but after a few minutes I discovered the tiny flying bugs that bite that I’d read about.  So I switched (thank goodness for the undershirt I had on) to the long sleeved with tight cuffs and tight at the neck…warm but better than bites…and tucked the bottom of my pants into my socks.  Worked like a charm!  As usual I was in my sandals but with socks.   Others were slathering bug protection on themselves because of the bugs that were biting.

During this wait we also met the people from Florida from the train station yesterday, Linda and Padro; they were just visiting the ruins today and will hike the taller mountain tomorrow.   It was so much to see them again.  They’d taken an earlier train yesterday than we did.
We signed in at ten o’clock, so they can make sure everyone comes back out before they close; and began the hike.  You also have to sign out when you return.  So glad that the hotel where we are staying loaned us hiking poles; can’t imagine how we would have made the climb without them.  Up and down the trails we went.  At times there were cables to help on the tougher spots.  We took our time and stopped often; and we were not alone.   During our rests we took photos for other people and they in turn took our photo.    Normally it takes about two hours for a young person to go to the top and return if the weather is good.  We met many middle aged people who were on their way down who’d started at seven am. 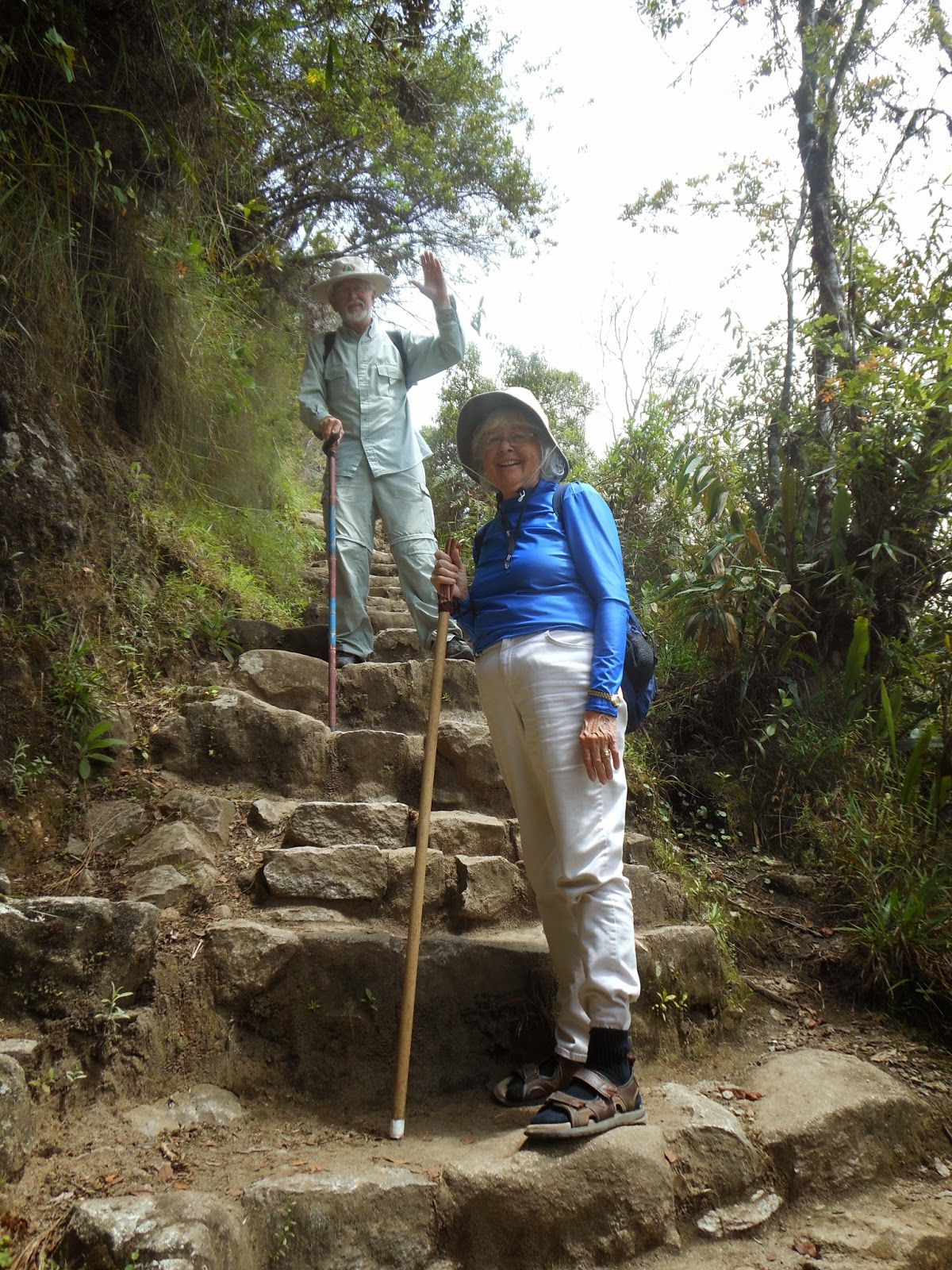 By about 11:30 am we were two-thirds of the way up.  The path was getting steeper and steeper and very irregular.  I went ahead up one more while Jim waited and when I got there I discovered a wonderful view of the ruins below.  I called out to Jim about the wonderful view and he also made the climb and we enjoyed the view while we chatted with groups as they were descending.  We had a chocolate bar with us and shared it with a couple from England.    Everyone discouraged us from going any higher.  They said it got much worst and dangerous and the view wasn’t much more than what we had at that spot.  I don’t think we saw anyone quite as old as we are on the trail.   Everyone was great at helping us and saying how great it was that we were doing the climb.

But we took the advice and turned around at that point.  It was much faster back and by 12:30 we were off the mountain and back into the park.  We did a bit more viewing of the ruins close up simply because it was the only way to get back to the park entrance.  We were both drained by the time we climbed on the bus to go back down to the village near the train station that is called Aqua Caliente (because of the hot springs) and also Machu Picchu Pueblo.   The line was long at the bus stop as many were going down the hill but they were well organized and it moved fast.  There were buses leaving every few minutes.  They raced down the hill; sometimes having to back up to let the one coming back empty to pass on the one lane road.  We saw many young people hiking down the trail that leads from the village below to the park.  The bus ticket is expensive for the young and they have the energy to make the hike. 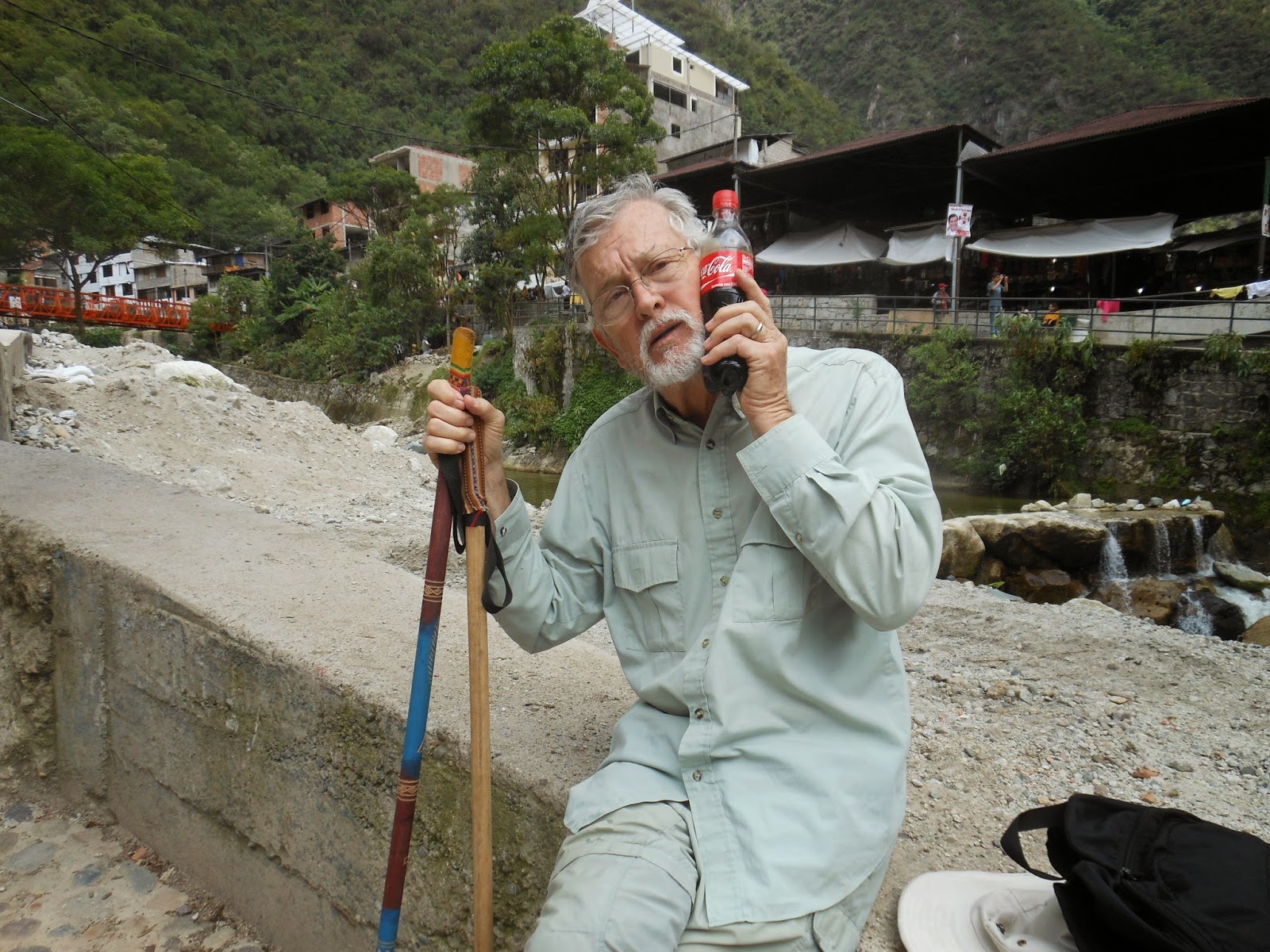 We were down and back to our hotel by two o’clock.   We stopped on the walk up to the hotel to pick up an ice cold bottle of coke for Jim; he really needed it by now.  We’d both drank our water sparingly during the trip for many reasons!

Hot showers as soon as we arrived and we felt ever so much better.  I had over three hundred fifty photos on my camera…I’ve only posted 103 for you on the slideshow.   So the afternoon was spent selecting and uploading photos along with just plain relaxing.  We are spending another night in our hotel and then will catch the train out tomorrow afternoon.  Then the bus to Cusco where we’ll enjoy another few days before boarding the plane to California.

We ventured out just a short walk tonight for a yummy dessert:  lemon pie and hot chocolate.  Delicious.  While we were there two Americans came in for dessert; Texas and Oregon.   They’ve been doing lots of backpacking and camping here in Peru.  We chatted for a bit and I’ve included a photo of the backpacks in the slideshow.

Happy Thanksgiving to friends and family....
Another day is nearly over; I hope you enjoy the slideshow below.   If you have trouble viewing the slideshow you can go directly with this link:   https://picasaweb.google.com/marthajans

Thank you for giving us the Picasa site for your photographs...it is wonderful to look at them in a larger format! Your photographs of Machu Pichu, and your hike up the mountain, are beautiful...and up close and personal look at a legendary place!