Museum of Saint Catherine of Siena Convent in Cusco Peru


Woke up about eight o’clock this morning and found that Jim was up and down all night with stomach cramps; must have been that “regular” food that he ate last night at dinner.  Whatever, he was not feeling well and skipped breakfast and church. 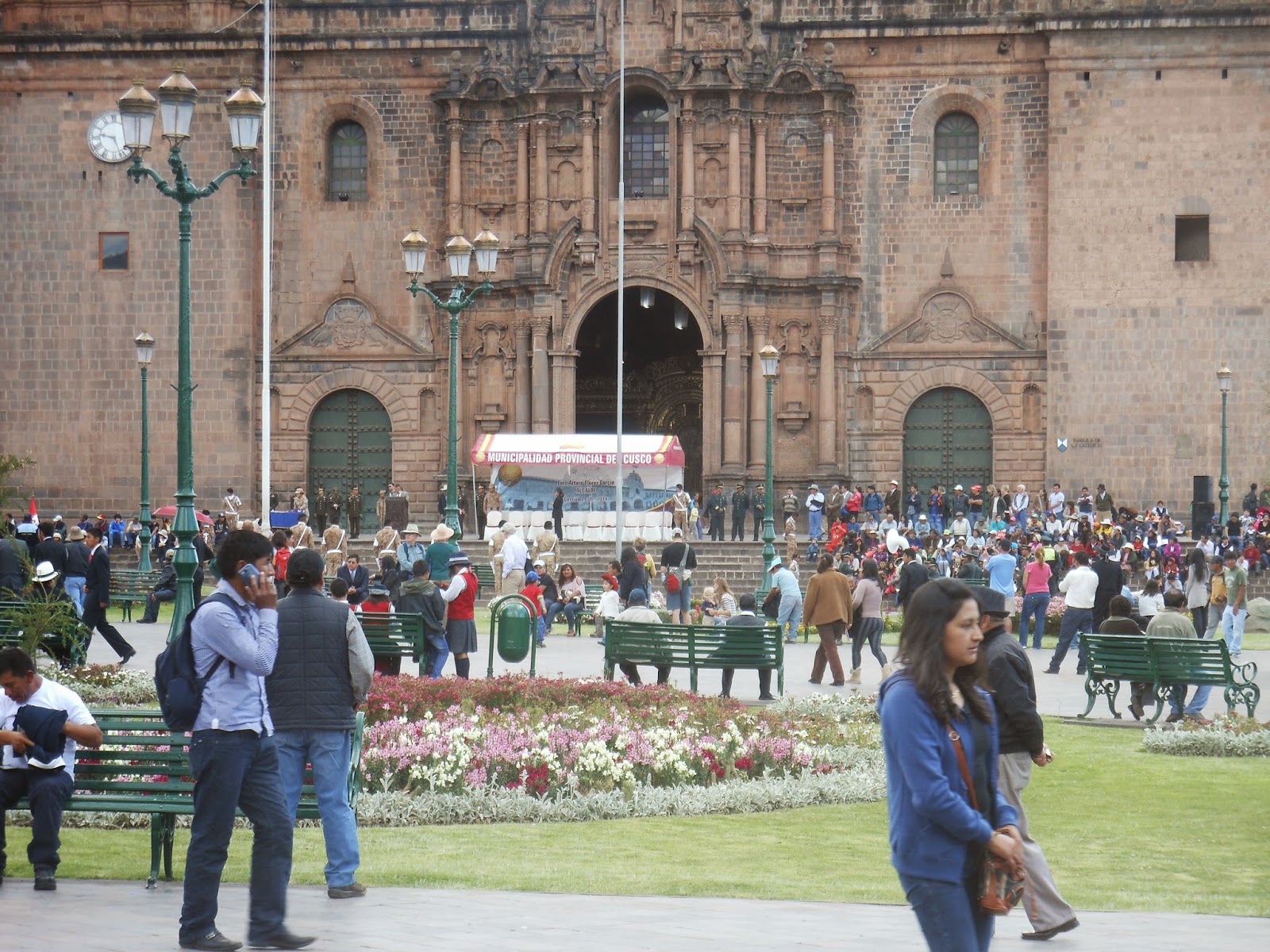 I went out about ten o’clock and used the ATM machine to get enough local currency to pay our hotel bill when we leave on Tuesday and also picked up a coke for Jim and our last bottle of water we’ll need.   The Plaza was still very busy with political speeches and marching bands; crowds of people were over by the Cathedral.  Not sure how late it went last night but I’d think they’d be getting tired by now.

When I went back out at 11:15 am to walk to church, the plaza was completely cleared of all of the political activities and it was rather empty; but nice to not have firecrackers going off during Mass.  I attended the 11:30 am Mass in the Jesuit Cathedral.   It’s never crowded and other than not understanding the language; a pleasant experience.  The priest has to be in his eighties and stands at the altar throughout the entire Mass.  At communion time they help him down the three steps and a nun holds the chalice and hands the priest a host; he dips it in the wine that he holds and places it on the tongue of each person.    During consecration the priest suddenly stopped, looked out at the aisle near me and said very distinctly; “Senor, sit down.”  He said it twice and the gentlemen (a tourist I suspect) who was standing in the aisle slipped into my pew and sat down.  Soon he knelt like the rest of us and the Mass continued.  As soon as we all stood he hurriedly exited the church.   They tell you at the door that no tourists are allowed unless you are attending the Mass. 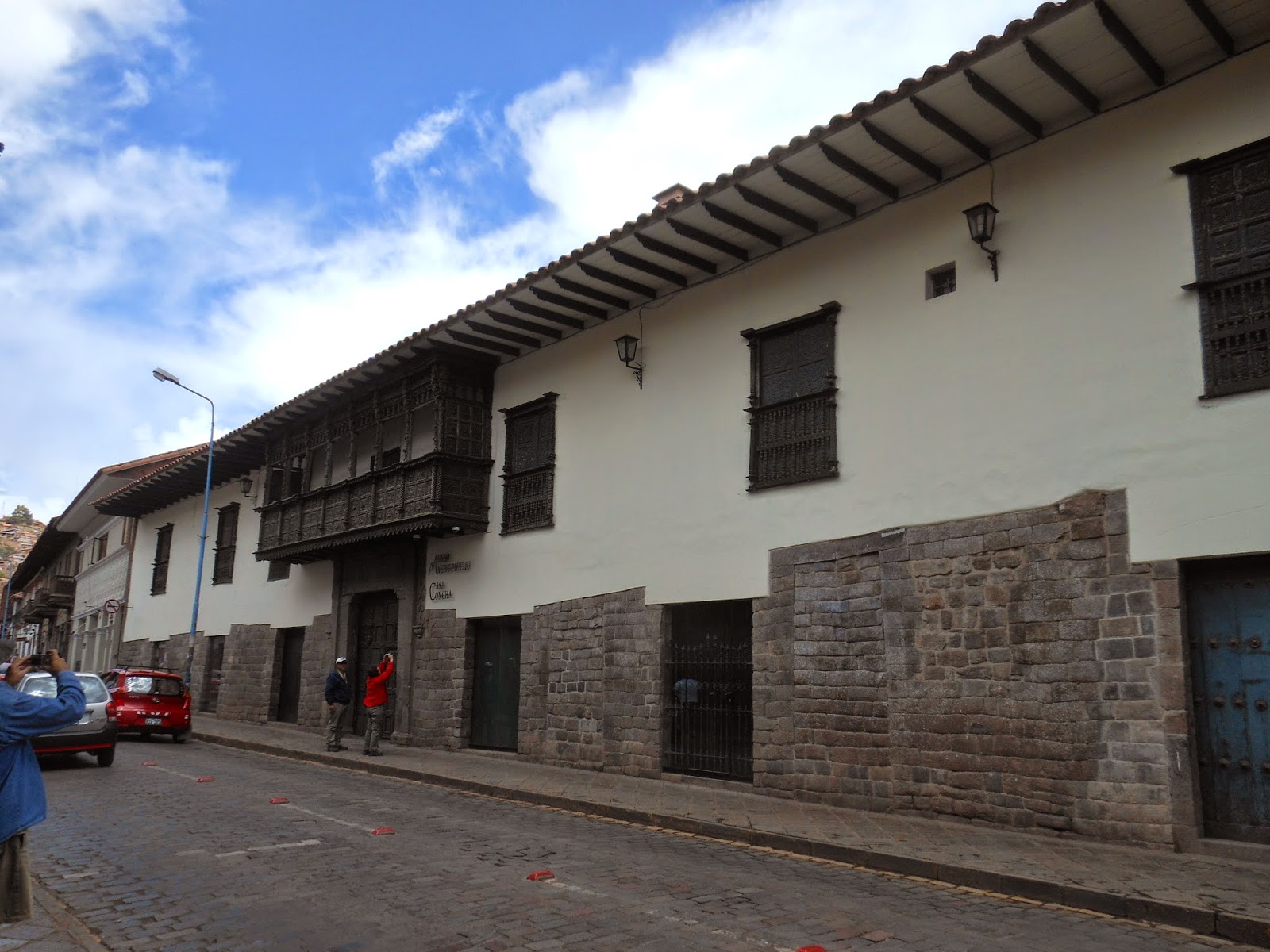 After Mass I walked over to find two Museums that we’d considered visiting today if Jim feels better.  The first one was Museo Machu Picchu Casa Concha.  This one is the one that houses most of the collection returned by Yale University in 2007; the building is also famous as it was the home of a famous man during the time of the conquistadors.   It was locked up tight today.
The second one was the Monasterio de Santa Catalina, and we actually visited this later in the afternoon.   I also checked out a restaurant that our hotel manager Yury recommended.  It looks beautiful but the name is Greens Organic Restaurant.  The name alone implies a pricy menu.  We’ll probably pass and go to another one tonight.

I found Jim back in the hotel on his computer and feeling a bit better but not up to food yet.  We sat in the atrium and enjoyed a game of our favorite cards:  Hand and Foot.  Love the new rules that you have to have two clean and two dirty books before you can go out.  It makes the hand last longer.  I won today but barely; it was touch and go!   About 1:30 pm we heard ran on the skylight; it really pounded for about five minutes and then stopped.  Otherwise it has been a nice day except the weatherman has been predicting ninety percent rain every day.  So, we never leave the hotel without umbrellas, but it seldom rains; however we do see lots of black clouds.   We’ve been very fortunate during our visit with the weather as this is the beginning of their winter/rainy season. 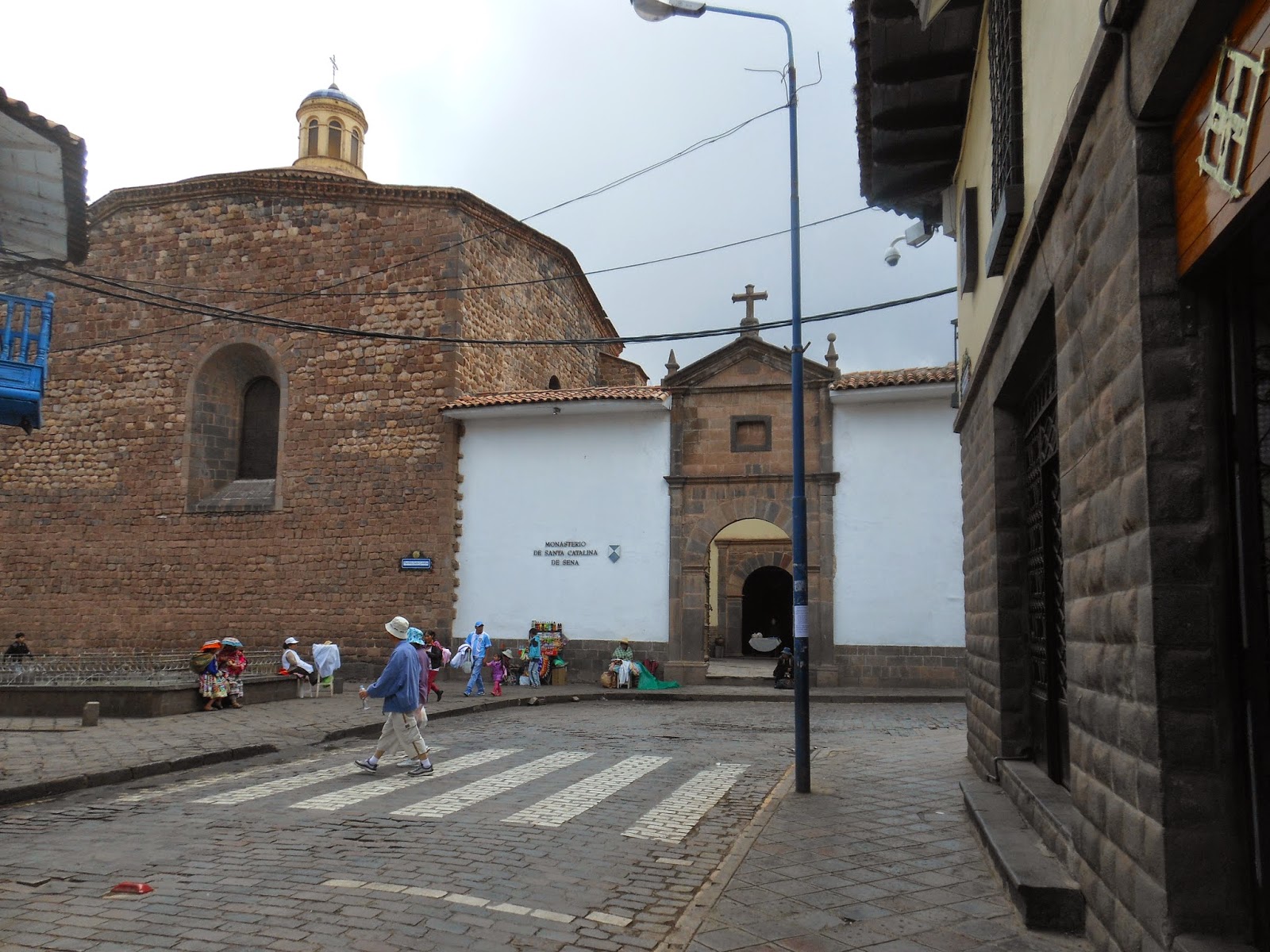 About half past three we headed out the door to visit the Monasterio de Santa Catalina better known as the Museum of the Convent of Saint Catherine of Siena.    There are only a few remaining nuns in this convent and tourism is one of their sources of income.   They didn’t have many “no photo” signs up so I took advantage of that fact and it also helped that there was only one guard per floor.  This convent was established about four hundred years ago by a widow and her daughter who’d both taken religious orders.  They established their convent in an Inka Palace that was used to house royal single women who were celebrant for their entire life.   The choice of location was perfect.

They had mannequins of nuns throughout the museum; sitting around the table at mealtime, sewing, praying and even one in the box where they put nuns when they died.  We entered through the workshop where they created beautiful garments and altar pieces for the churches.  There was even a tiny sewing machine that they worked by hand.  Then the grieving room for the dead. 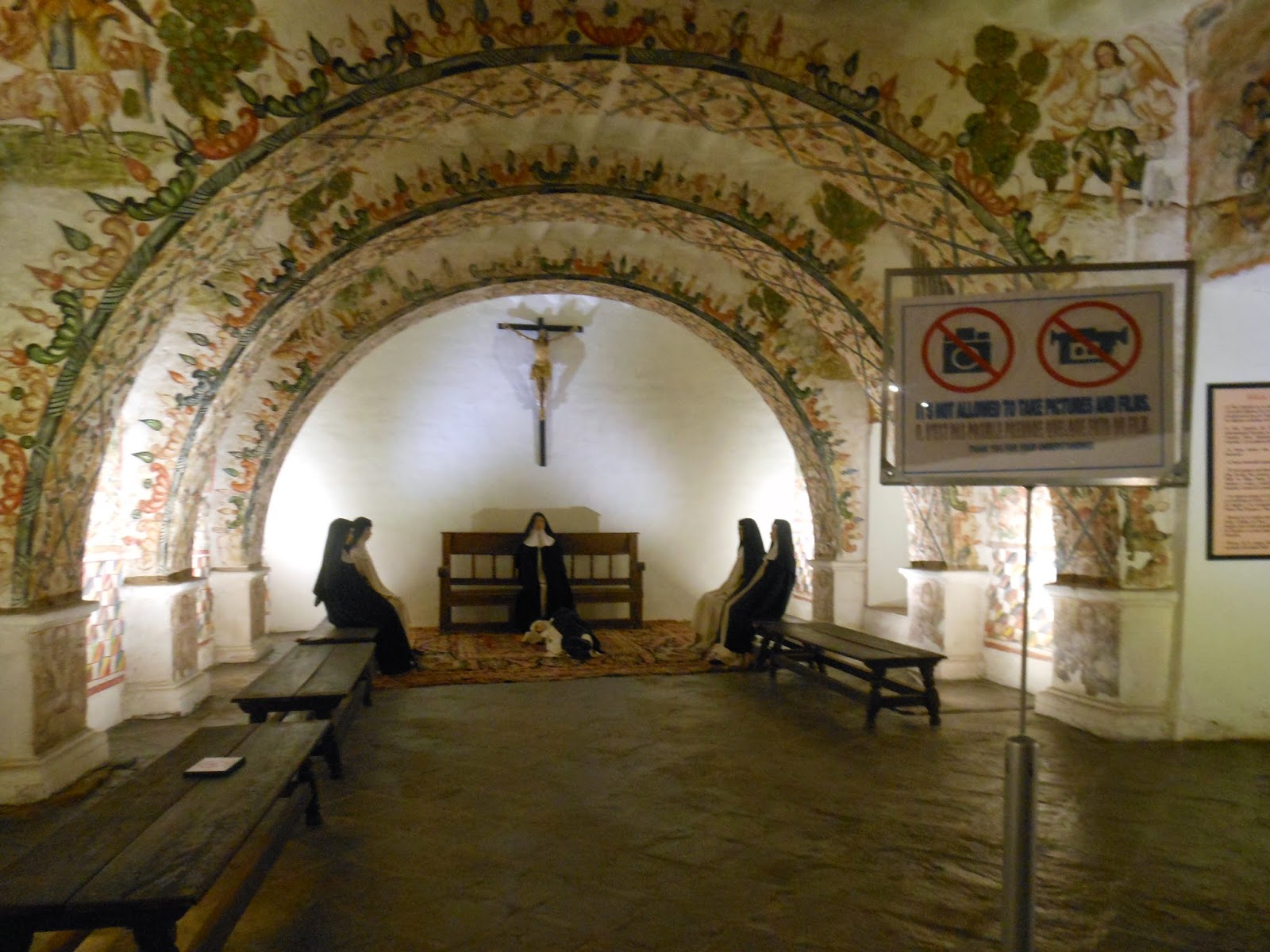 Next we viewed the Chapter Room where they held meetings.  The walls were covered by beautiful paintings.  Up the stairs we found the living area for the nuns.  First, the large refectory, then the sleeping area; small cubicles sectioned off with curtains.  Each area had a switch on the wall for corporal punishment if they felt they deserved it.  Across the room was a private washing area, again sectioned off with curtains.    There was a two room suite for the mother superior.   The last rooms that we visited were an art gallery that houses their many valuable paintings including three of their most valuable paintings from the seventeenth century by Diego Quispe Tito who is most representative of the Cusco School of Art.  Truly an enjoyable visit. 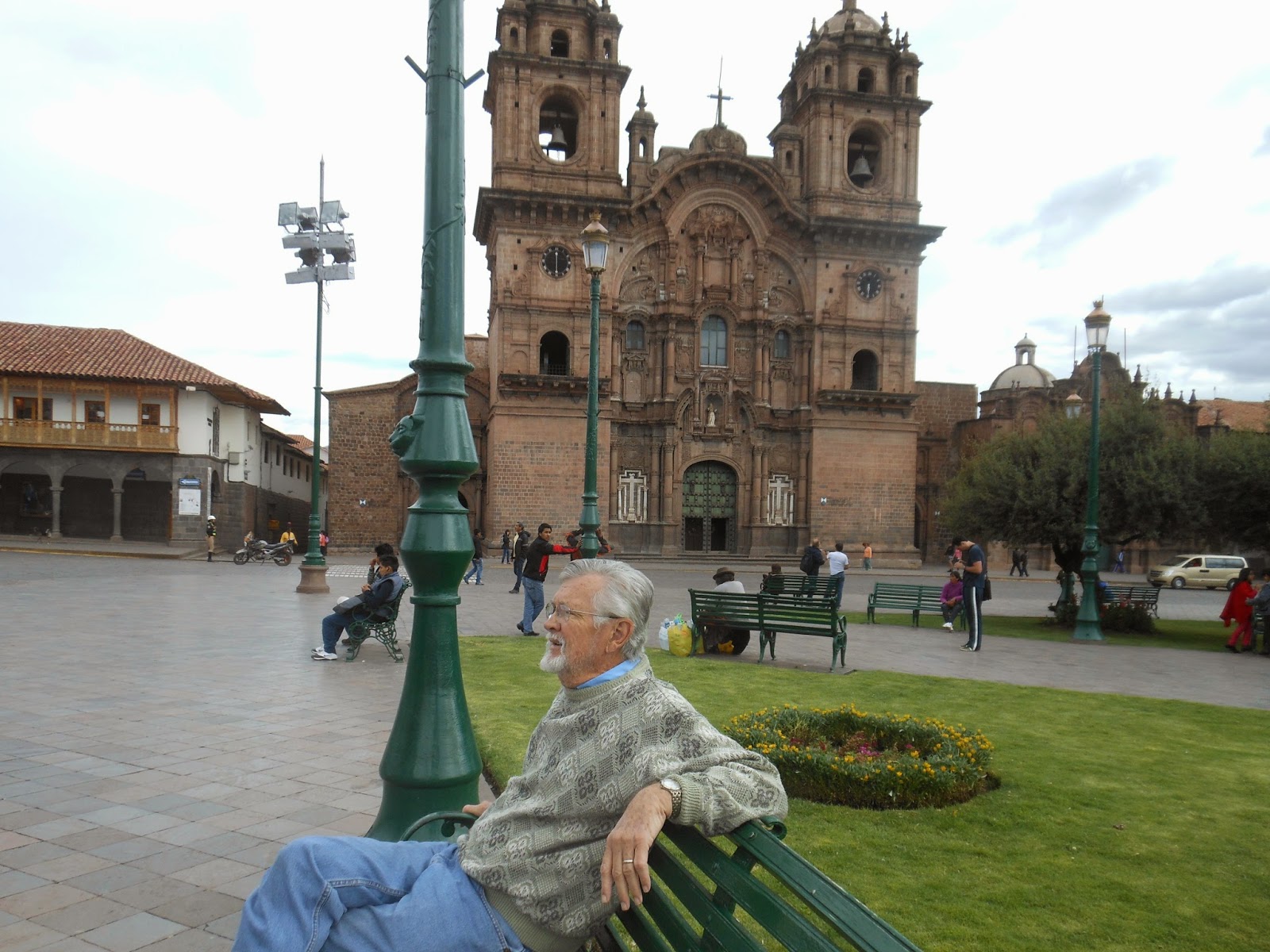 We enjoyed some people watching time on a bench in the Plaza until we had so many street vendors asking us to purchase their wares that we left; especially one who remembered us from yesterday.  She actually sat down on the bench next to use and we chatted.  She had another hour to work and then she would get on the van/bus to ride home to Chinchero (we’ve driven through her town four times on our bus trips last week) over half an hour away and then she has to walk up the hill to her home.  But, we still didn’t buy another beautifully carved gourd from her!

Back in the hotel room we discussed dinner.  Jim still wasn’t up to par and I wasn’t that hungry, so we opted for a small box of Kentucky Fried Chicken for each about six o’clock.   I walked over and brought them back to the hotel where we enjoyed them while watching television shows in Spanish.  No..…they don’t give us English subtitles.   It’s an early evening for us.

Thanks for joining our journey on the last few days.  We have a day and a half to go and then it’s off to the USA on Tuesday.    The slideshow has a few photos for you of the Museum that you’ll enjoy along with some of the Plaza throughout the day.