A Serindipity Day in Paris

The morning started early for me when the alarm went off at 8:45 am...they were delivering the cover for our duvet at 9 am!  Jim continued to sleep until 11 am while I sent out my first blog on the Internet.   Our apartment is very comfortable and the couch is very easy to make into a bed; one only pulls on a strap and out it comes without removing the cushions!  So, yes, we turn it back into a couch each morning.  I'll take a photo today and show you on the next blog.

After a late breakfast we ventured out into the streets; it was cold but the sun was shining brilliantly and it was a beautiful winter day in Paris. 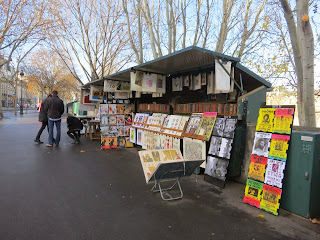 We walked along the Seine River, stopping to browse the market stalls that were open, all the way to the d'Orsay Museum.   During one photo stop a slightly built young girl stopped us to ask if a large gold ring she picked up off the ground was ours.  No...and as she continued to talk to us I finally accepted the ring??   Jim knew better.  Within a few seconds she turned and asked for money...ah ha...a gypsy!   I gave her back the ring and she continued to ask for money.  We walked away and I continued to take photos of the river; suddenly I turned and snapped a photo of her!  Oops...she didn't like that and started yelling at me to erase the photo.  I ignored her and we walked away; she followed us for blocks but we ignored her.  Enjoy her photo in the slideshow and beware of large gold rings! 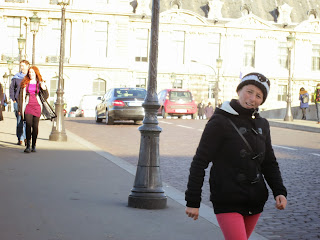 Soon we were at the Batobus Stop where we approached the clerk in the booth.  We'd purchased season tickets last August knowing we'd be back in December.  They were half price then so for 30 euros we had a season pass good until December 31st.  The fare is 15 euros a day.  A good bargain except that I was unable to find where I had carefully stored mine along with my Metro Naviago Card while I went to Israel!  Jim had his cards and I found the receipt for the purchase that I brought with me.   At first the clerk looked at us like we were "crazy" but after very polite conversation he made some calls and sure enough; he reissued my card!  We have eleven days to ride the boat up and down the river.

Climbed on the next boat and rode it to the end before it turns around just before the Pont d'Austerlitz.   There we departed and walked over to the Gare de Lyon and purchased a new Naviago card for me and then added time to both my new one and Jim's old one.  The cards are good for Monday to Monday so we also purchased some Metro tickets to use until Monday.   Several of the Christmas photos are of trees and decorations in the train station. 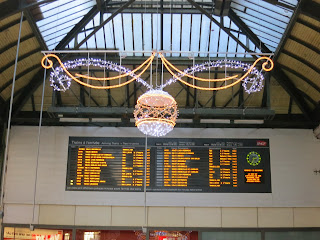 Everywhere we look there are festive decorations in this City of Light!

With our housekeeping chores done we walked back to the Batobus stop and climbed aboard the next bus for the return trip to our apartment.  This time we passed the Isle de la Cite on the right side with stops at several of the more popular stops.  Soon we were back at the Eiffel Tower and turned around to repeat the route.  It was already sunset and the sky was full of "trails" from several jets that were putting on a show in the sky over the Eiffel Tower; there are several of the many photos that I took here in the slideshow.

We were soon at the stop for St. Germain and we hopped off; we are less than one block from the river at this point.  As I mentioned before; rue de Seine is wall to wall Artist Shops or as Jim says...mini museums.   A very narrow street that after about six blocks crosses the busy street of St. Germain that is full of wonderful and expensive stores.

By this time it was dark and we hurried into our apartment and fixed an early dinner; made telephone 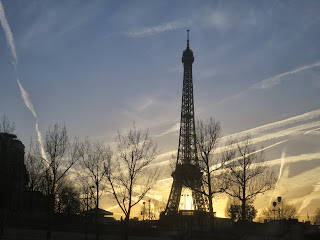 calls and then put on more layers of clothes before heading back out into the night.  In the winter the Batobus starts its last run from the Eiffel Tower at 7 pm; we caught this run as it came back to our stop.  We enjoyed the lights at night as we passed Notre Dame and on to the turn around point again before heading west on the river.  Our plan was to depart the boat at the stop for Plac de la Concorde.  But we were busy taking photos and missed that stop and got off at the next one that takes you to the Champ Elysee.   We were at the Grand Palais and it was full of red lights.

Suddenly we realized that something was in the grand exhibit hall under the huge glass dome; in twenty one years of coming to Paris we've never seen anything in this part of the Grand Palais! 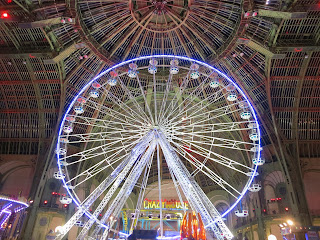 We discovered that it was open and for only 15 euros each we entered the building!   Wow!  A carnival inside including a giant Ferris wheel!   All the rides were included in the entry fee!   We first rode the Ferris wheel round and round with fabulous views from the top.   Then over to the tiny roller coaster than Jim agreed to ride with me; he was a bit sorry when we finished...it was little but mighty!   Then to the swings that eventually are straight out from the center but a gentle ride.  Then over to the loop de loop....I did this one by myself!   Over and over we went with two young French girls!  It was a fabulous ride and when we departed we were interviewed.  Apparently this will be featured on their website in a few days.  Not sure what they will use as I was so excited about the ride and really didn't realize what I was doing until they asked me to sign a release document so they can use the interview on their website!  Crazy old American woman!   Oh well...we'll see what they show.  You can probably see it also by checking out the website:  grandpalais.fr 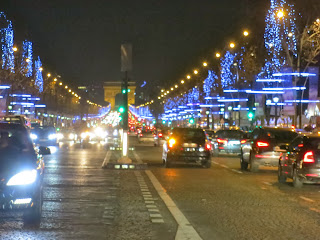 And the night was still young as we finished looking at everything and then walked out into the brisk night air and headed towards the Champs Elysee.  There we marveled at the decor and realized that the "Tours de Fetes" continued along the boulevard from the Arc de Troimphe to the large Ferris Wheel right next to the obelisk at the plac de Concorde.  We walked the length of it past all the little wooden buildings that were full of things to eat and/or purchase; everything you could think of was being sold here.  At the Ferris Wheel we decided to call it a night and walked over to the left side of the Seine River and then home past the d'Orsay Museum to our apartment.  It was nearly 11 pm by the time we arrived home. 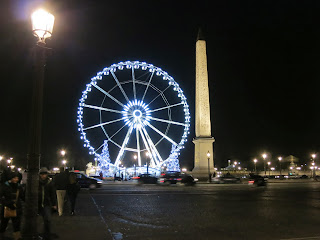 Hot chocolate with some dessert while we checked the Internet and made a few phone calls home before showers and to bed after a very serendipity day.   It's now about 10 am and Jim is still soundly asleep.   Our neighbor upstairs arrived home about 4 am; the floors are thin but they were in bed soon after they arrived home.   Soon we will begin another day full of unplanned adventures!

Hope you enjoy the slideshow...