Christmas Lights around the Louvre Musee

Good morning world!  Its about 40 degrees outside, not yet light and about 8:20 am on December 22nd here in Paris.  We're expecting light rain today.  In another 40 minutes is will be December 22nd in California in the USA and I will officially be 75 years old!

My wish for my 75th year was to spend it living in Europe.  I didn't quite make that but I did manage to travel nearly six months of the year; so yes, I feel that I got my wish fulfilled in spades!

Yesterday began about 9 am when I awoke and wrote my blog about Friday.  I wake about two hours before Jim each day and have found that it's best to go to bed after downloading my photos and putting something on Facebook and then writing my blog the next morning. 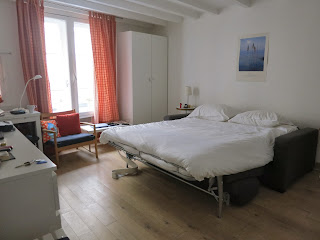 I'm wrapped in a warm and fuzzy black blanket that I found on the closet shelf; not a robe but works just as well while I wait for the heater to warm up our apartment.  As I promised yesterday, the first few photos of the slideshow are about our couch/bed; so easy to make each morning and evening.

It was nearly noon yesterday when Jim started his day; we had a very late breakfast that also was our lunch.  Then I walked to the Carrfour Grocery store just two long blocks away for things that we needed and a restocking of some of the food.  We've decided to really do this right and eat ninety percent of our meals here in the apartment.  We enjoy cooking together and it certainly is much cheaper than dining out in restaurants.

Jim was enjoying his day in the apartment when I returned so after putting things away I was off again; this time to the Metro Station on St. Germain .   I've located a diagonal street that takes me to the church of St. Germain Des Pres in less than five minutes and the Metro Station is just across the street.  From there I can connect to anywhere in the city.  We will also be able to catch the bus by walking only half a block to the Quai Voltaire; I just have to locate the bus stop and figure out what bus goes where.  Our Naviago Pass will work for either Metro or Bus and is only 18.90 euros a week. 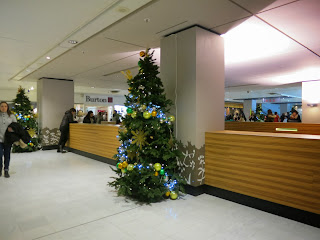 Today I used a Metro ticket as our pass is not valid until Monday and went three stops to the Montparnasse stop to shop at the Galeries Lafayette; a smaller store but much closer than the one over behind the Opera House.  I had some Christmas shopping to do.  The stores were gaily decked out in Christmas decoration and I enjoyed taking photos as much as the shopping.  The streets were crowded with shoppers and the air had a festive ring to it!  The sun is not shining as much today but it is dry and overcast.

Returned on the Metro using the same ticket as it's good for a limited time to allow you to transfer between lines.  Walked over to the church to check on the Mass times for tonight and enjoyed the Christmas Market set up all around the church. 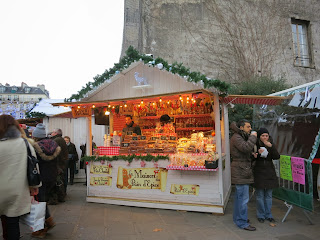 The same little white wooden houses like we saw on the Champs Elysee yesterday.  The church is directly across the street from the three coffee shops made famous by Hemingway and his fellow writers in the early 1900's:  Les Deux Magots, Brasserie Lipp and Cafe de Flores.   My plan is to have coffee at each of these at least once in the next thirty days.

Soon I was back at the apartment and we fixed an early dinner about 5:30 pm.  By six o'clock we were out the door and off to see the lights and market around the church of Saint Germain des Pres before attending the seven o'clock Mass in the beautiful and very old church.  This church is one of the oldest buildings in the city of Paris.  Built in the first century it is full of history. 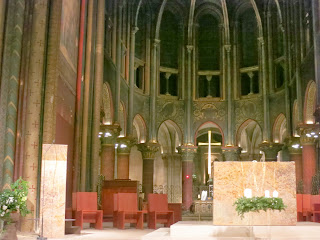 They are in the process of building a fund to do badly needed extensive renovations in the next few years; but it is still a beautiful church inside and out and in our neighborhood.  Paris is full of Catholic Churches and we have so many choices but I think we'll probably attend this one most of the time.

Leaving church we headed back to the apartment for more layers of clothes before walking out to the river and across the bridge into the courtyard of the Louvre.  There we enjoyed the glass pyramid and took turns climbing up on a stone "stool" for photos touching the top of the pyramid; a foolish thing to do at our age as we could have easily fallen getting up and down but we managed to accomplish our goal without injury! 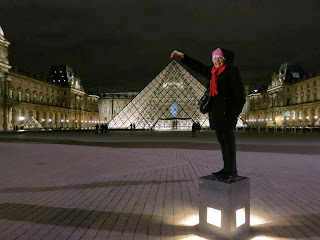 through a large window and also enjoy a woman who was playing her violin to earn a few coins; soon we arrived on Rue de Rivoli for the lights on the Louvre Hotel and other buildings.  A short walk west brought us to the entrance to the Carrousel Mall; the underground shopping center that also leads you to an underground entrance to the Louvre.  There is where we found the halls and stores decorated for Christmas; and I love taking photos of the inverted pyramid when the room is empty at night.

Back on the street we walked back through the passageway to the center courtyard and continued over to the empty area in front of the Arc du Triomphe Carrousel; built after the 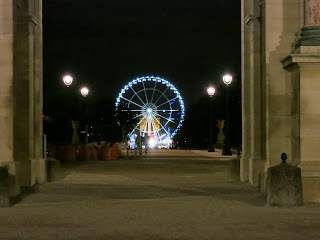 Revolution when a section of the Louvre was destroyed and opened this area to the Tulleries Gardens.  There we took photos showing the direct line of the three Arc du Triomphe plus the obelisk on the Place De La Concorde.  And for the holidays, the huge Ferris Wheel that sits at the edge of the Tulleries in front of the obelisk.   Suddenly we saw the lights start to flash on the Eiffel Tower and realized that it was nine o'clock!  I took a video and later posted it on Facebook.  Hope you had a chance to see the magical flashing lights that happen every hour for five minutes.

Soon we were headed back to the left bank and a different way home; not as direct as we thought as the streets twist and turn so one is never quite sure where you are. 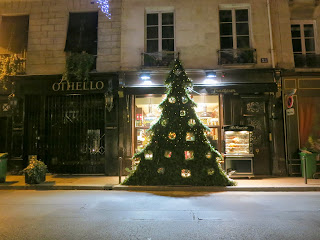 Finally we checked the map and saw that we were only one block from our street; but the good news is that we saw many more Christmas decorations on stores on our route home.

By ten we were inside and finally warm again; it's in the thirties at night and our thin California blood cools fast!  Enjoyed hot chocolate and candy for dessert while we watched the Museum show on television that has Jim chomping at the bit to find out how he can get this channel at home!  Before we knew it the clock had whizzed to nearly midnight before we were tucked into bed for the night.

Hope you enjoy the slideshow of Christmas decorations in this City of Lights!