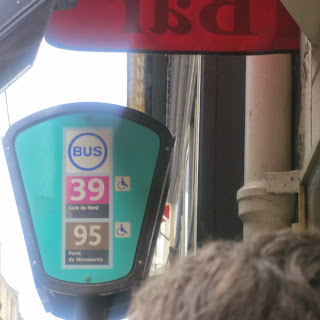 The day started late again; about three o'clock we dressed warmly and carried umbrellas as we walked the long block to our closest bus stop to catch #95.  We rode it across the Seine River, past the Louvre and on down the Avenue de l'Opera; passing the Opera we skirted past the west side of the grand magasins as we headed for Place de Clichy and finally crossed the bridge that runs over the Cimetiere Montmartre.   From that point on we were trying to remember where we should get off to walk up the back roads to Sacre Coeur.

Soon we were a stop away from the end of the route at Porte de Montmartre; we hopped off the bus and crossed the street to ride the bus back to the Cimetiere.  There we got off and walked a short distance along Rue Caulaincourt until we reached Rue Lepic and headed up the steep road to our destination for this afternoon. 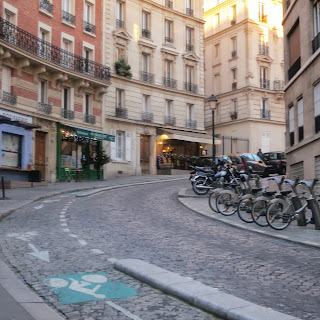 Many stores already had their Christmas lights on as it was just about time for the sunset.   We stopped to admire the ancient windmill and views across Paris and soon we were at the more famous windmill that has been a restaurant for more than one hundred years.    You'll love the photo of the artist adding touches to his characterization of the cartoon caricature Popeye.   Soon we were at the top and into the area with restaurants and artists all angling for a euro by painting portraits.

From there we walked across the street to the very old and small church that has survived under the shadows of the famous and massive towers of Sacre Coeur know as Paroisse Saint-Pierre de Montmartre.  Founded on a Roman Temple around 400 AD.  Built to almost it's present size in 1093 and rebuilt in the 16th and 17th centuries.   Gothic style from the middle ages, it is rather plain but beautiful in its simplicity.   They had a very old and beautiful nativity scene.  It was 5:15 pm so we decided to return for the six oclock Mass. 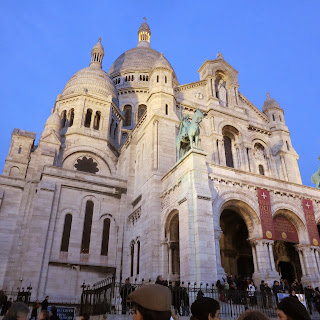 We walked back outside and around the corner through the massive crowds to view Sacre Coeur from the outside.  The road to the Basilica was wall to wall Christmas booths as they had a market in full swing as we made our way over to the church.  A few photos and we stopped to enjoy the views over Paris once more before heading back to the restaurants.  We had half an hour before church and I needed a WC so we stopped in at the Au Clairon Des Chanseurs to enjoy a large glass of bordeaux wine as we enjoyed viewing  a large painting of Notre Dame from the left bank on the wall.

Soon it was six o'clock and we walked the short distance back to Saint-Pierre for the Mass.  A beautiful Mass with lovely organ music, well attended but not crowded.  We'd planned to attend the 6:45 pm Mass at St. Suplice today but this was a nice change; our first time to attend Mass at this beautiful church. 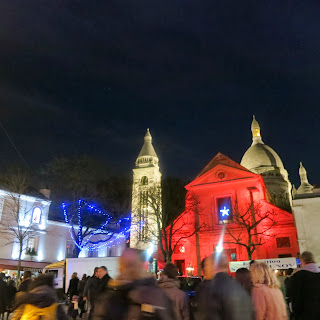 After Mass we headed back towards the front of Sacre Coeur and the funicular; there were crowds waiting to go down so we elected to walk down the stairs with many other people.  At the bottom we snapped our last photo of Sacre Coeur and then continued to the Metro Station at Anvers.  Two changes and we were home in time to fix our dinner about eight o'clock.

We enjoyed our evening and by nine o'clock we were back out the door without umbrellas....we'd hardly used them today and it was definitely dry now...and walked back to the stop for bus #95.  We had to wait half an hour as the buses are not as frequent after nine pm.  We stayed on the bus until just past the Opera House and got off at Blvd. Haussmann to take photos of the windows of the Grand Magasins:  Printemps and Galeries Lafayette.   I was wrong in that there were still many children viewing the windows even though it was after ten o'clock at night!   But, the crowds were thinner and Jim waited patiently for me at each of the many windows as I took multiple photos and a few videos of the animated ones.   He could keep track of me with my red hat, he said!

We were there nearly an hour and then found the Metro Station.  One change and we were home just before midnight.  A long day filled with lots of twinkling lights....I hope you enjoy the slideshow and that Google+ continues to add twinkle and snow effects for you!
Posted by Martha at 1:39 AM