Yesterday was a long day, we awoke early...if you can call ten o'clock early...and it was a long day as we finally turned out the lights about one o'clock last night.  But a fun day!  As you can see by the dates I'm posting the day after for the most part.

It was Sunday morning and the streets below our windows were quiet as we enjoyed a late breakfast and our computers.  I'm having trouble putting my book down...I've several on my Tablet through the services of Kindle..."Paris...The Novel"  by Edward Rutherfurd is the one that I've been reading since before we left home.   The book covers the history of Paris from 1261 to 1940 in the form of a novel about inter-related families.   Assuming that the facts are correct and they seem to be; it is a fascinating history of the city we are enjoying.  I'm nearly three quarters finished and I find that I'm reading later and later each night.  Jim is enjoying a book that he brought from home; "A Paris Christmas...Immoveable Feast" by John Baxter.   This again is very appropriate for our month in Paris during the season. 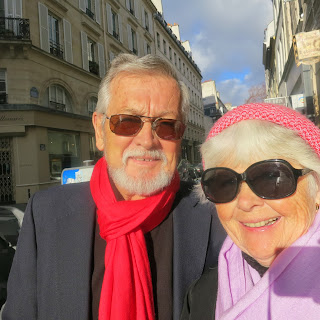 About one o'clock in the afternoon we dressed warmly and walked to our Metro Station.  There we renewed our Naviago Pass for another week...it expires each Monday....and then caught the next train eastward to the Gare d'Austrilitz, then changed to another Metro for our short trip across the Seine River to the Bastille Station.  An item of interest in this station is a display of stone, according to the information provided, part of the real Bastille Prison that was destroyed after the Revolution.   There is even a line in the floor showing the continuing outline of the wall that is preserved and shown for all of us to appreciate.  If we'd left the station, in the street there is another outline of the actual walls of the prison that you can follow if you're brave enough to follow it out into the street as it crosses the broad Place de Bastille with all of it's traffic circling the large statue that dominates the center. 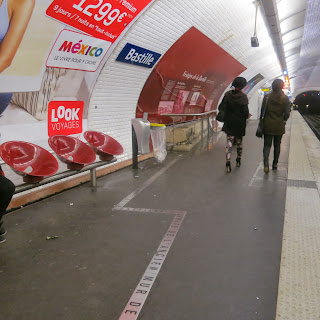 From the Bastille we caught yet another Metro train.  Notice in the photos that we were now on a modern train with large windows and doors that all open automatically at each stop.  Although it's fun to stand at the door and flip the handle on the old versions at just the right time for them to open!
The conductor flips a release but it takes a real person to actually open these doors.

We continued our journey out to the edge of Paris and the Perpherique, that large freeway-like road that totally encloses the city of Paris.  We arrived at Porte Doree and walked over the Perpherique into the huge park known as "the lungs of Paris" or more formally as Paris - Bois de Vincennes.    We only touched the western part of the park today, but still walked about two miles around a long lake.  Along the way we saw children riding on ponies, rowboats stacked for the winter, a sign to beware of thin ice...not today as it's a beautiful day full of sunshine and brisk air.  There was mistletoe in the tree tops, swans on the lake, two islands in the center that had only one way in and out...so we stayed on the outer edge as we enjoyed strolling with the Parisians on a Sunday afternoon.  Near the end of the lake we watched a young man with a miniture radio controlled speed boat entertain everyone with his high speeds that frightened the birds off the water but only caused the gracious swans to turn their heads with distain at the distraction of the people who were feeding them. 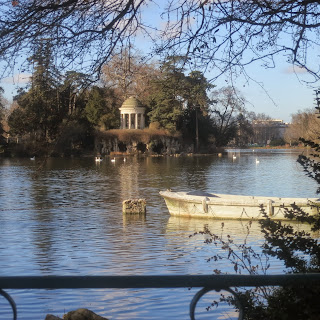 Headed back around the other side we encountered many sitting with their eyes closed, their faces absorbing the sunshine that they will miss in the coming winter months when there will be glace on the water and weather too forbidding to visit this glorious park. 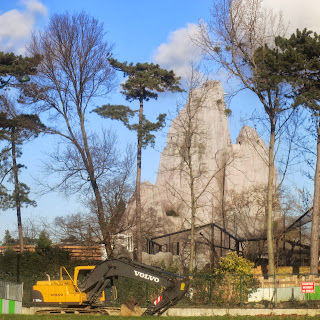 To the east we watched an unusual structure.  It had to be man-made but when and for what?   We thought it would be a perfect venue for rock climbing adventurers.   As we neared the end of the park, we decided to follow the direction of the tall structure and signs indicated we were headed for the Zoologique.  After walking well over another half mile, past a very large glass domed  building that we determined was for plants, we found the entrance and the answers to our questions.  The "mountain" had been build in 1934 for a large herd of goats as part of the Zoo.  It is now closed for renovations and will reopen in 2014.

Back to the Metro Station, we figured we walked at least three miles, across the Peripherique, and back into Paris.  We decided to leave the train at the d'Austerlitz Station  and walk to where we could catch the Batobus for a ride on the Seine River.  We were headed down the steps and when I reached the bottom...I'd been busy putting on my hat and gloves...I looked around...no Jim!   I walked back up the stairs...still no Jim.   I got out my cell phone and called him; thank goodness we each have a phone for moments like this.  Turns out he was in front of me and had exited the station when he realized I was not with him.   So thankful at times like this that we had the good sense to get these little cell phones! 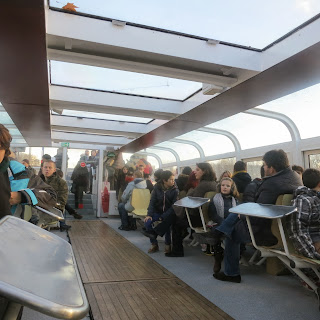 Walked to the River and had to run the last half block to catch the boat that had pulled up.   Soon we were on a very crowded boat.  We were seated at the front and Jim asked the crew member if he knew about the small boy who'd stopped breathing on our boat two nights before.  Yes, he did.  He was the captain of that boat on that night.  He didn't really have any more information for us as apparently the family only spoke Spanish and the para-medics spoke French so he was busy translating between them until they took the boy off of the boat.  He didn't know what happened after that.

The city is full of French people and tourists who've come to enjoy the "Time Square" of Paris on New Years Eve:  Avenue des Champs Elysees.   At the next stop there were twice as many people standing in line as the boat could hold.  We decided to depart at the stop for the Louvre and walk home along the Quai to the Pont Beau Arts where we crossed the river to the left bank and were soon tucked into our little apartment.  It was five o'clock and time for a light supper and some time to read books for awhile.

At 7:15 pm we dressed warmly and headed out the door to our evening as "paying" guests of the American Expat Jim Haynes.  Every Sunday evening he holds open house for a group of people numbering from fifty to seventy-five or more in the summer when the party can flow into the patio from the small apartment/garret on the first floor.   It is a word of mouth gathering that has been going on for years.  He has written some books and has even had the New York Times write an article about his gatherings.  There is an internet site and you have to have a reservation to attend.  There is always a waiting list and the donation suggested is thirty euros per person. 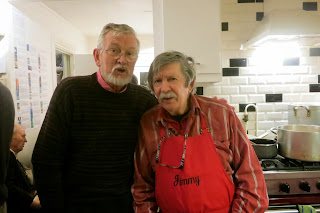 Always a fun gathering full of unexpected surprises at times.  In 2012 we met five different people who we had a connection with with us in California.  Tonight it was cold and very crowded; there were sixty people per the host, Jim Haynes.    We met people from Illinois, Michigan, San Francisco, many from Canada, Berlin, Solovika, New York, Virginia, and various other parts of the world.  A real estate agent who works six months in Paris and six months in San Francisco each year and so many more.  I had Peter, from Canada now living in Berlin, on one side and Helen from Canada on the other side of me.  Peter was explaining that he was working as an Artist in Berlin and had a visa that allows him to receive commissions but not salary and Helen said she had a friend whose daughter was also in Berlin under similar conditions that played the accordian....Peter said...is her name.....and there we had another unexpected connection!   Helen's son, Monty, who is living and studying in Paris (she is visiting him for the week) has gained employment by way of Craig's List:  he babysits for two French families to help him learn the language and teach the children English.   A fun evening with great food and always a fresh face as we moved about the room.  Soon it was time to return to the Metro and home.  We arrived about eleven o'clock, a good time for phone calls home on our International Skype service as it's the middle of the day in America.

I hope you've enjoyed our journey for the day and also the slideshow: