When we arrived last week we were warned not to drink the cocoa tea after seven o’clock in the evening as it might keep us awake as it is a stimulus.  We purchased our own cocoa tea leaves and bags of cocoa candy at the store and have been enjoying some each day.   Last night I wasn’t thinking and I had some candy about nine o’clock in the evening.  I finally got to sleep about three in the morning!  A lesson learned the hard way!

But it was a good night as I slept until after eight o’clock.  Mass is scheduled for 11:30 am and we planned a leisurely morning.  We were the last ones to arrive for breakfast; it was larger than normal and even included bananas and papaya…a new fruit for me.   We used the ham and cheese to make sandwiches and also saved our bananas.  Thus, later in the day we enjoyed lunch in our room and then soup at a nearby restaurant about an hour later.  Also split a small beer brewed in Cusco for the first time.  So far no ill effects from the alcohol. 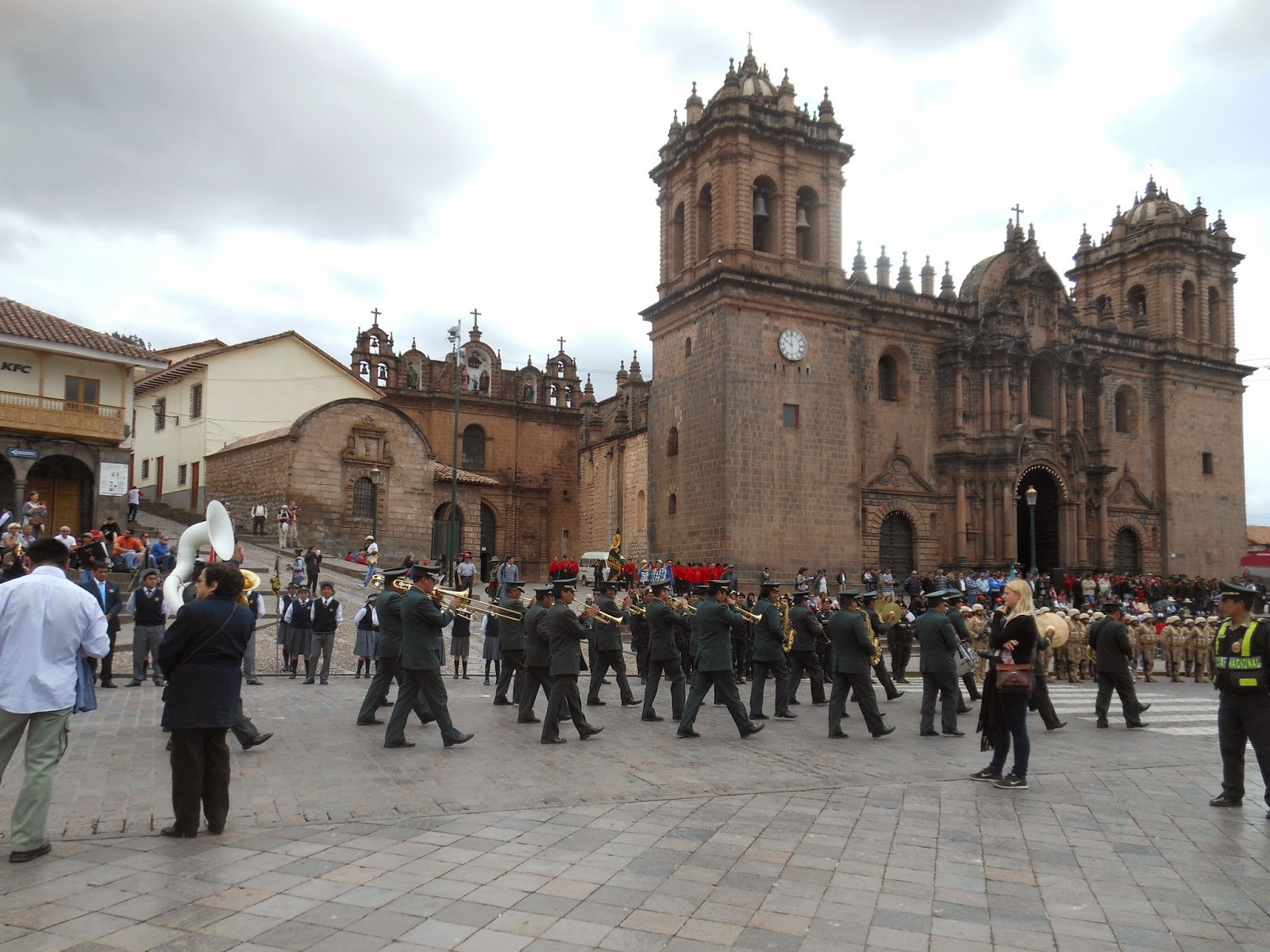 About ten o’clock we ventured out to see what was happening; we were greeted with marching bands and a big parade in the Plaza.  There were several hundred people in the parade.  Military units, dignitaries, school children, religious groups and several bands marching around the square.    The huge main doors of the Cathedral were open and a Mass was happening inside.  There was beautiful organ music when we stepped to see what was happening.  The church was packed with standing room only and the Mass was half over so we left.   Church vs State, each competing for the attention of the people.

We skirted around the back and finally got over to the Jesuit Cathedral to check on the time for the Mass and it was still on schedule for 11:30 which gave us time to find some historic items located near the square.  Suddenly the rain started but the parade continued.  We raised our umbrellas and headed off of the Plaza. 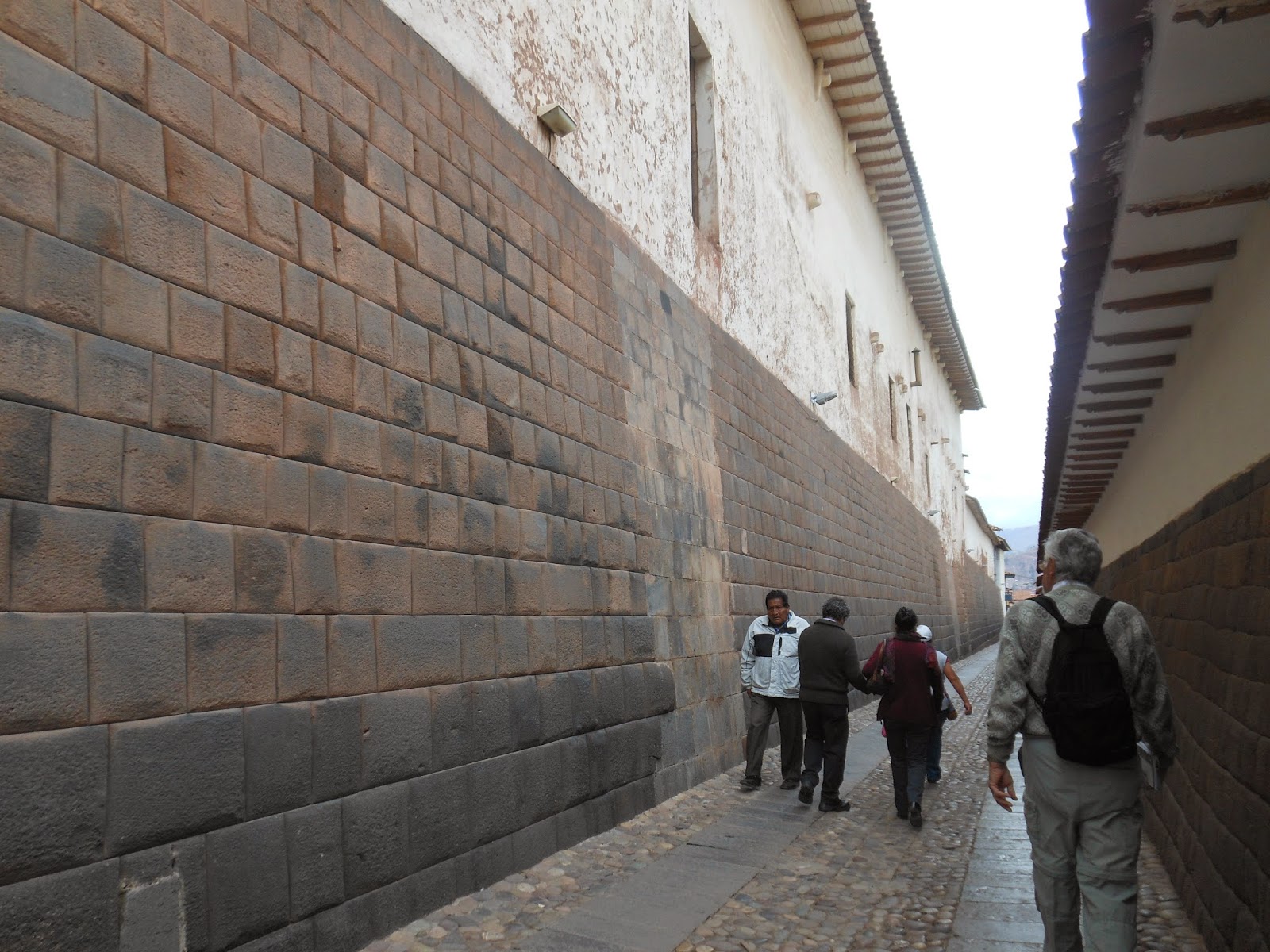 We were looking for the walls of ancient Inca stones that were built during the same time as the fortress up on the hill.  Many of the lower portions of the buildings still have original stones.  You can spot areas that were damaged in the earthquakes over the years and repaired.  The original stones are set so precisely that you can’t get a pen knife or slip of paper between them.  No mud or cement was used.
Today these walls are topped with various forms of building materials but the most striking to me were those that have beautiful glass walls along the top.  Our second quest in the rain was to find the Bishop’s Palace where we’d gone to the Cathedral Museum yesterday. 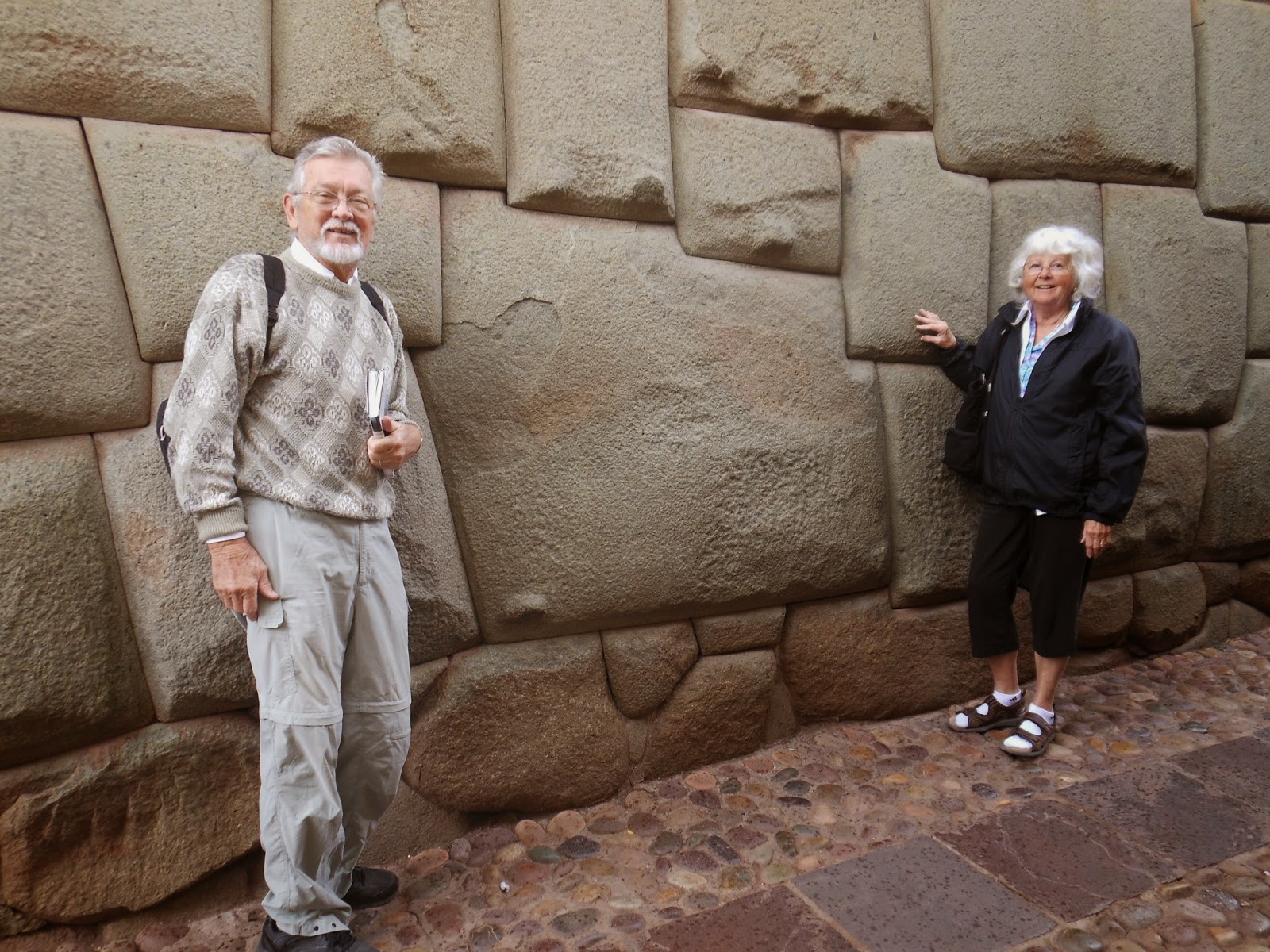 Today we wanted to find the famous twelve sided stone that was used to build this huge building that was originally an Inca Palace.  It is very famous and they are very proud of this particular stone that was set flawlessly into the wall.  Even in the rain tourists and locals were having their photos taken next to the stone.   We checked three sides of the building before finally locating the correct spot.
We also found a church that was open and did not have guards.  I managed two quick photos before I was told “no photos”.    Next door is the St. Catherine of Seine Convent that has been converted to a Museum since 1975.  The rain continued as well as the parade.  But, the spectators moved from the Plaza to the covered porticos to watch.    And did I mention; fireworks continued to explode regularly all day long.

Back to the hotel for a minute and then a dash across the Plaza to the church were we attended a beautiful Spanish Mass by a Jesuit priest who stood at the altar for the entire Mass.  At communion, an assistance held the chalice and handed the priest a host for each person.  The priest dipped it into wine in the chalice that he was holding and then placed it on the tongue of each person receiving Holy Communion.  Very different and beautiful.    The gold altars were so beautiful that they were distracting during the Mass.  The Jesuit Community wanted to build a church as grand or grander that the existing Cathedral.  The Bishop would not allow it but to my eyes it’s just as beautiful, and about the same in size.  They may consider it secondary but they’re really equal.  But the major feasts are celebrated in the Cathedral that we visited yesterday.  Numero Uno

After Mass the parade was still continuing; one of the firecracker explosions during Mass was so loud I jumped when it went off.  Even in the rain they continued.   We dashed to our hotel and enjoyed a few hours of playing our favorite card game in the atrium of the hotel.   We changed some of the rules for Hand and Foot to make it a more interesting game for two people.  We used three decks of cards, dealt fifteen instead of eleven cards for the hand and for the foot.  Otherwise we played by the same rules.  I had a clean book of sevens twice during the game but Jim still came out the winner after the required four hands.  Lots of fun as we have been so busy we haven’t played cards since Florida.

It was about three o’clock by the time we finished and ate our late lunch.  Then off to walk the Plaza and a few blocks beyond.   We found the bus stop for Sightseeing buses in Cusco.  It’s a double decker, open top tour bus that gives you an hour and a half tour of the area.  We checked the places they go and discovered we’ve pretty well done ninety percent of the sites on our own already.  Light sprinkles but the weather seemed to be clearing.  After about an hour of walking we stopped at the Los Balcones Grill near our hotel where we each enjoyed a large bowl of soup before heading in for the night.

It’s been a wonderful day and I definitely am not eating any of the cocoa candy tonight!
Hope you enjoy the small slideshow below.
Posted by Martha at 4:52 PM

Thank you for taking time from your adventures to write your posts and put together your slide shows. I'm enjoying both very much!

Leslie in Oregon....so glad you are enjoying my blogs. It's always rewarding to hear that sharing my stories are enjoyed by others. Thanks...Martha