Today was filled with sunshine; it had to be at least seventy degrees outside.  The parks were full of Romans enjoying the day off and a rare day of sunshine.  I do think that Spring has arrived for Easter week.  We had a long day today, the pedometer said we did 7.26 miles!  We started about 10:30 am on the Metro heading towards the Museum of Villa Torlonia. 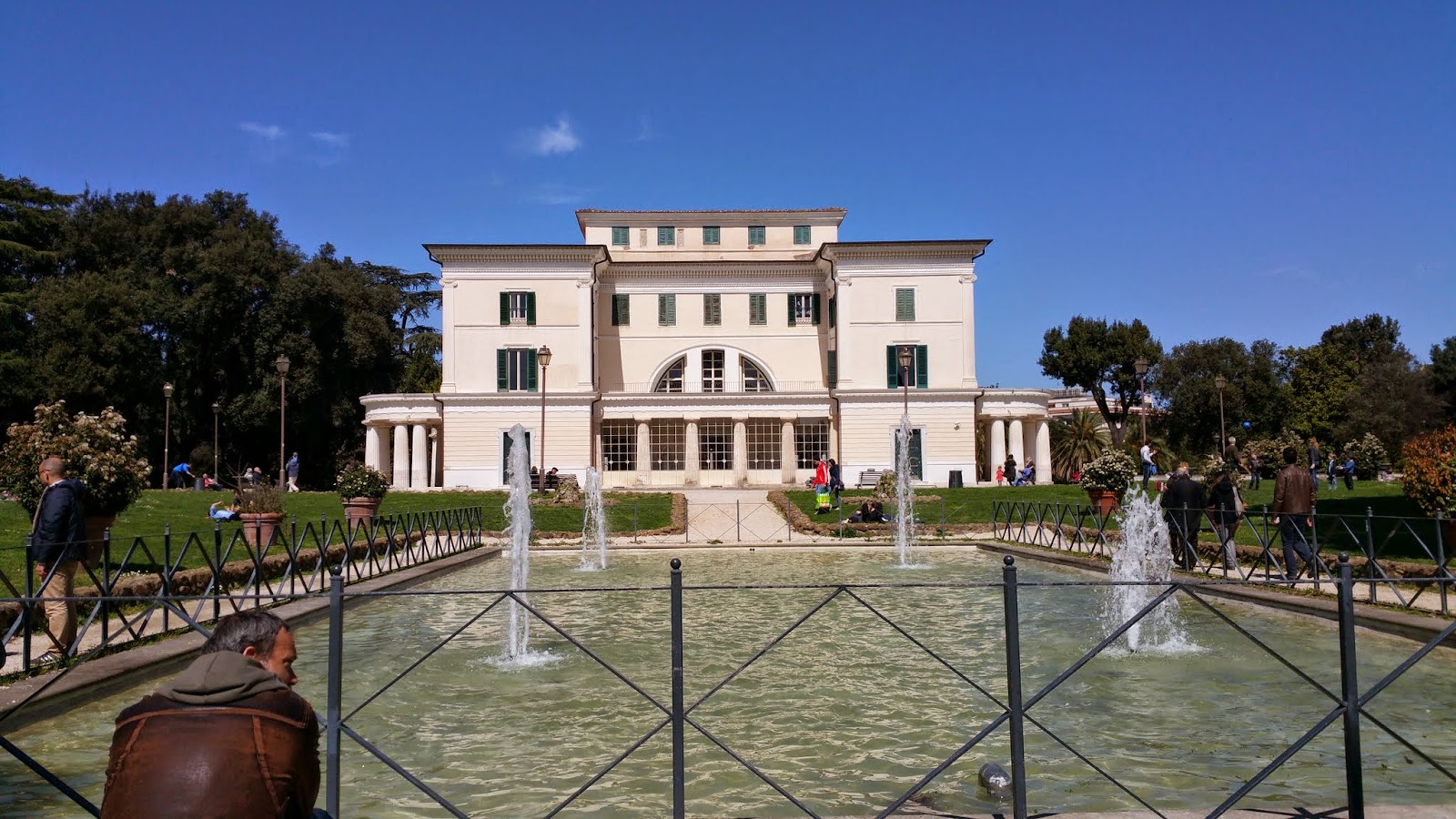 We got there the hard way by Metro to Termini, walked about six blocks and then caught a very narrow gauge tram...only one seat on each side of the car...to Porte Maggorie.  There we took Tram # 3 to our destination that was just one block past a metro station; yes, we could have done it much easier if we'd just stayed on the Metro.  The villa was located a few blocks from the tram inside of a large park that was filled with people enjoying the sunshine.  We enjoyed a free exhibit in the theater building of costumes and then walked to the main house for a tour.  The art was mostly modern, but some of the frescos on the walls were lovely.    What enticed us to see this house was the fact that in 1925 the Torlonia family invited Benito Mussolini to rent the property, which he did until 1943 when he was killed.  During the time he lived here he built an air raid shelter in the basement.  When the Americans arrived they used this property and after the war the State acquired the property.  I wouldn't add it to your must see when in Rome list; but a nice addition if you've lots of time while you are here.

Back on the tram we continued for three stops to the Buenos Aires Stop; jumped off and decided to take a look at the church rummage sale that was going on in their parking lot.  One unusual item was a table full of white shirts from America?  Also they had a huge selection of fur coats.  Fun to look but nothing special enough to carry home. 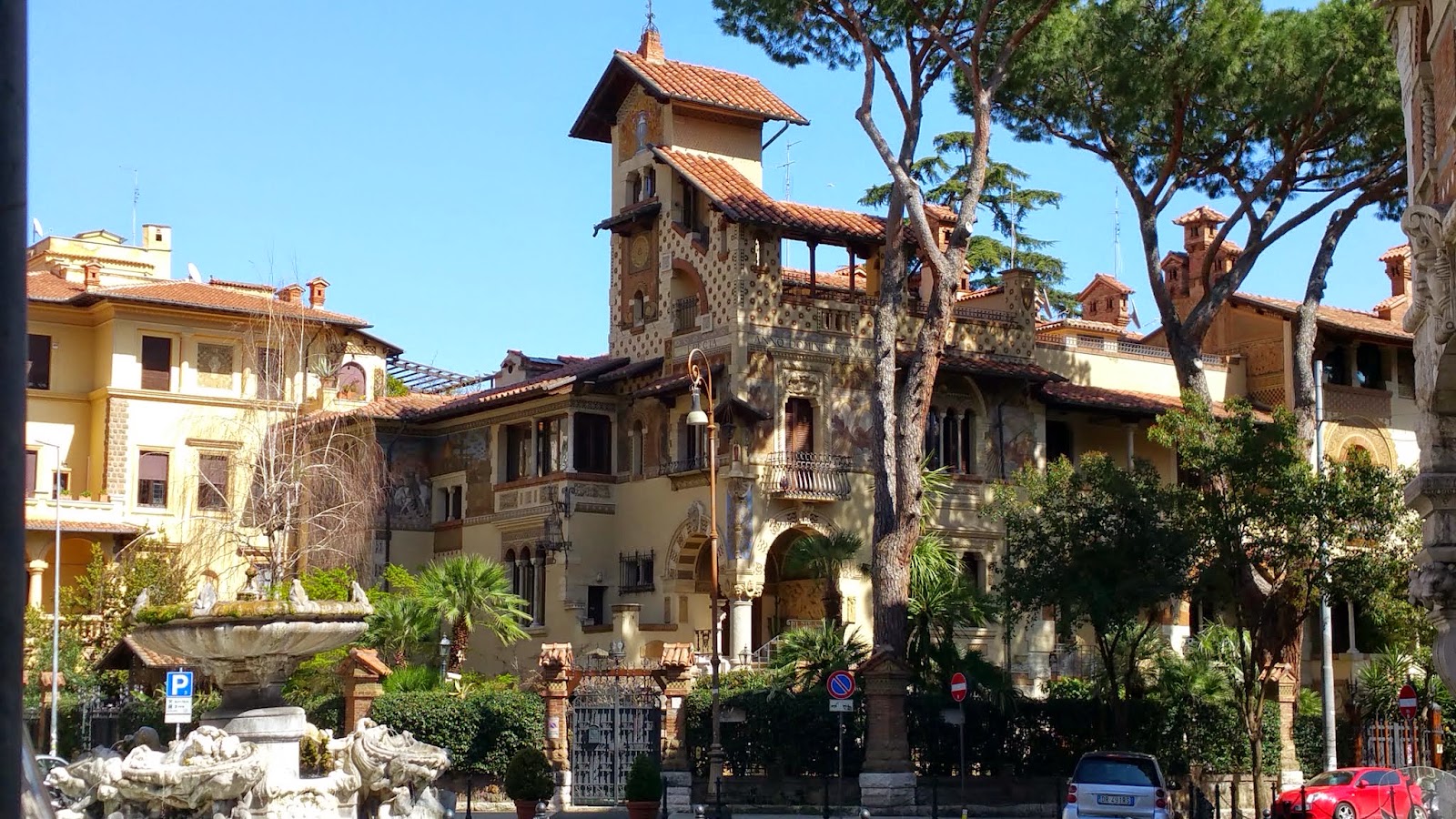 A few blocks down the street we located the buildings that we'd come to see.  A collection of buildings in varied architectural styles that was started by one man and it is called the Quartiere Coppede.  Something free to do in Rome!  There was even an embassy in one of the buildings.

Back on the tram but just to the Metro Station where we rode back to Termini, switched to A Metro and got off again at Lepanto Station.  We walked from there to Ponte Cavour to find what I think is the smallest museum in all of Rome.  It's a museum about purgatory.  We found it but the doors were locked.  Finally on our bus #49 from Cavour Plaza we headed home about four o'clock. 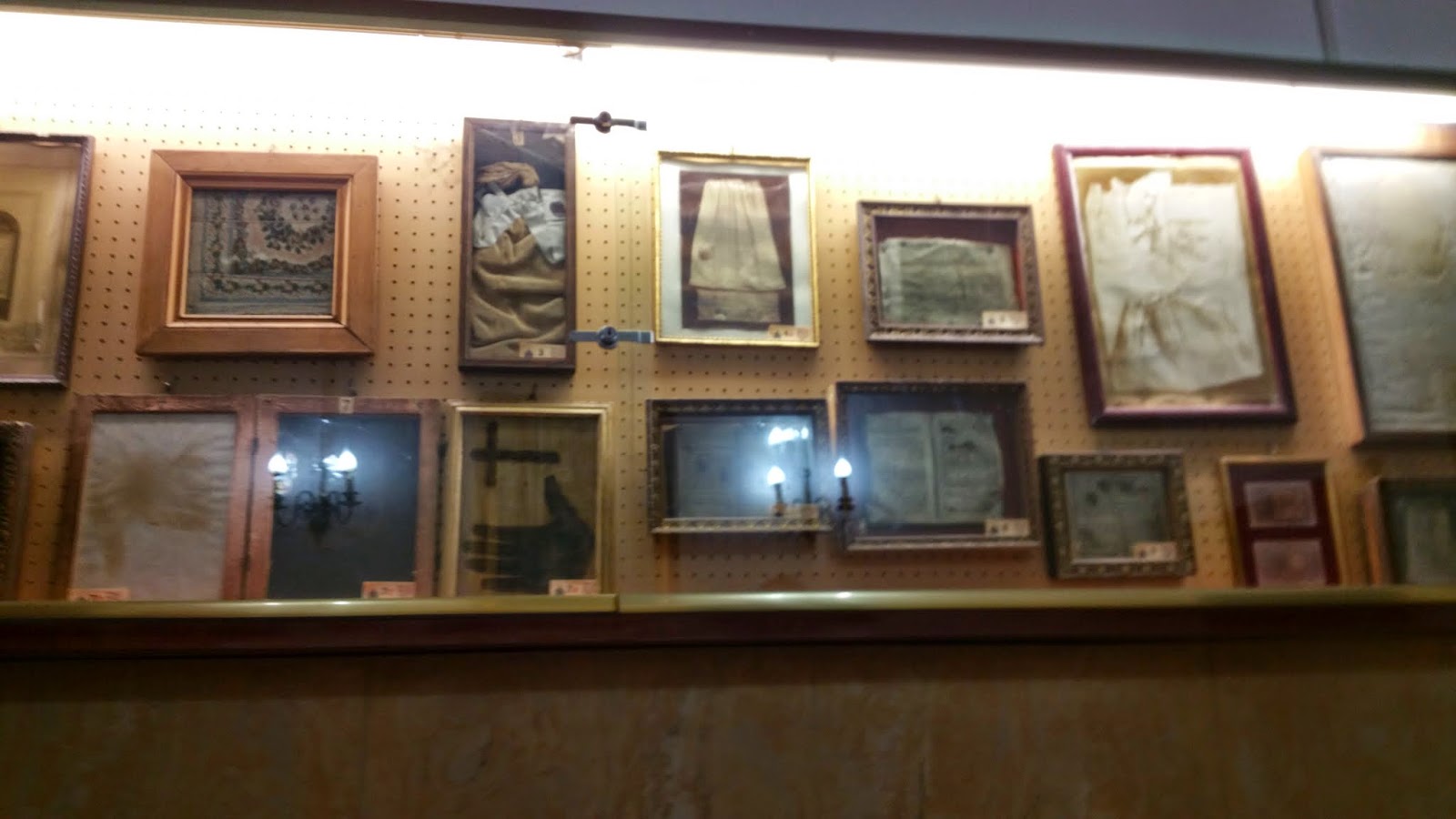 Once home Jim got on the internet and discovered that the church would open at 5 pm.  We fixed and early dinner and got back on the bus to Cavour Plaza.  There we found the church open and the little museum.  They were faded copies of items that had purportedly been touched by people who were in purgatory.   There were black fingerprints on them.  These people were asking for prayers to help them get to heaven from people who were still alive.  It took all of five minutes to see and then we walked all the way to Ponte Umbertic and then into the center of old Rome where we attended the six o'clock Mass at Saint Ignazio di Loyola Church. 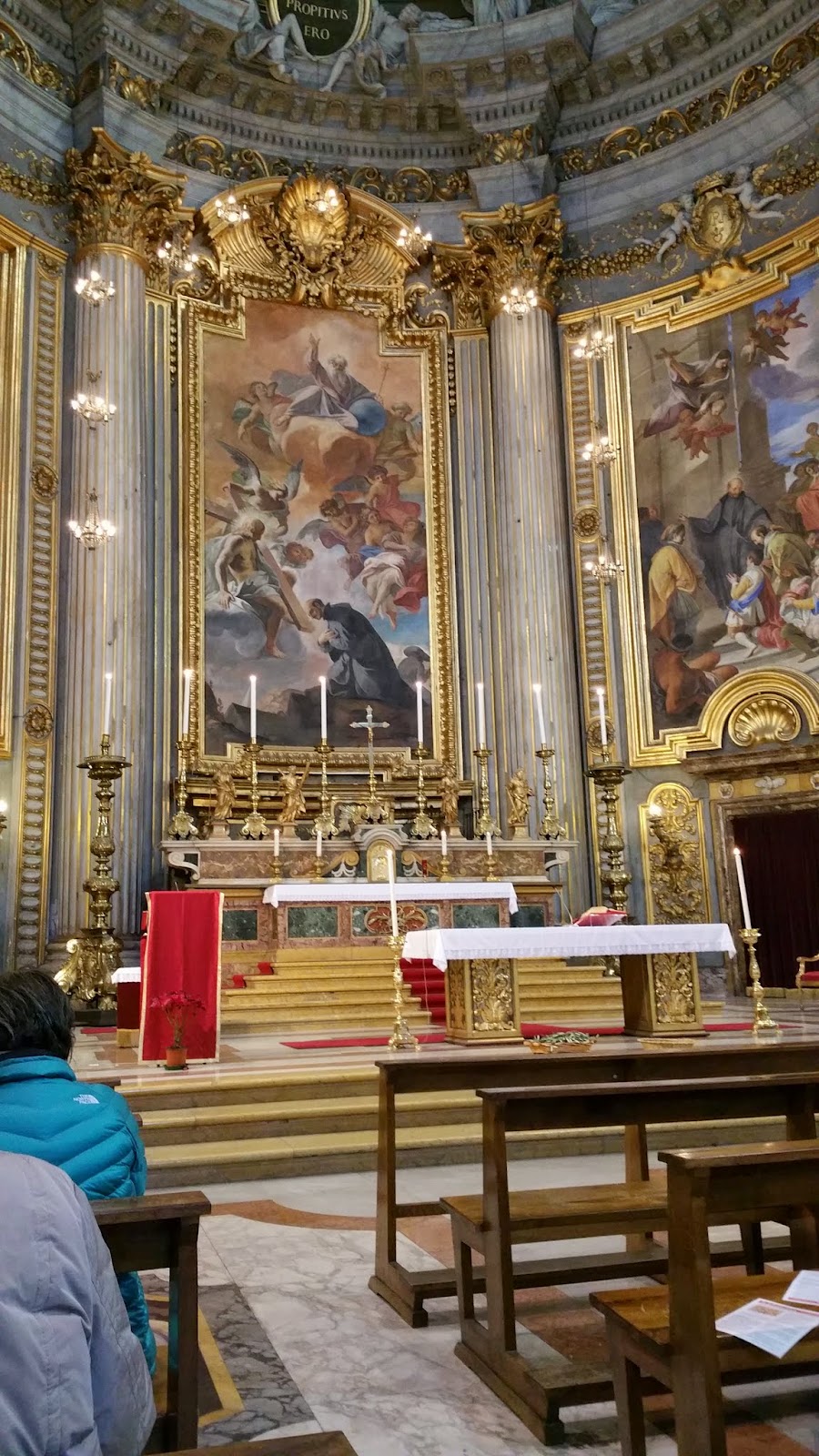 It is a beautiful church and we enjoyed the Passion read in Italian before receiving olive branches instead of palms for Palm Sunday.  The church can hold well over a thousand I'm sure but there were only twenty five of us attending mass.

Back on the bus with many others we stood in the aisle all the way back to the apartment arriving home just before eight o'clock.

We enjoyed our dessert of an apple, wine and chocolate along with a game of Hand and Foot cards.  This is the third time that I have typed this journal tonight...I lost the first two when I hit the wrong keys just as they were about finished.  Hope you've enjoyed the story.

A very good resource for everybody that wants to read a good blog.Your blog was absolutely fantastic! Great deal of great information and this can be useful some or maybe the other way. Keep updating your blog, anticipating to get more detailed contents.

A very good resource for everybody that wants to read a good blog.Your blog was absolutely fantastic! Great deal of great information and this can be useful some or maybe the other way. Keep updating your blog, anticipating to get more detailed contents