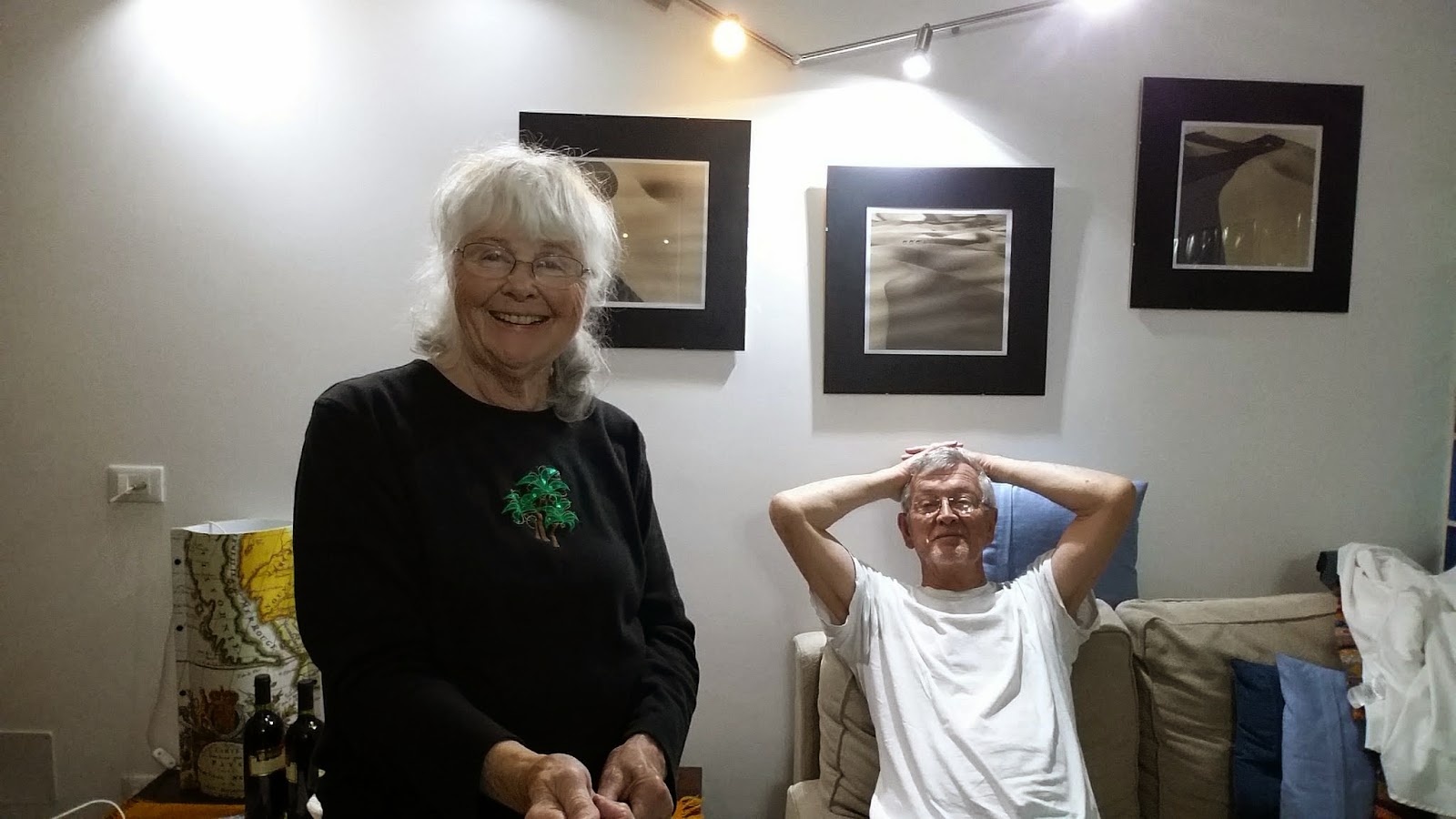 The beginning of our slideshow today features my first use of the Selfie Stick; we practiced last night by using the auto timer and did great.  I think I'll save the bluetooth part until after we get home.  Also you'll see a touch of  Eastlake high above our kitchen sink...they've done a great job adding decorative touches to the apartment.

We woke to pouring rain and news that it was going to last all day and that there would be wind to deal with also.  But, we were still out the door by ten o'clock for our adventures planned for today.  Yes, I'm still wearing my sandals with socks....I'm wet instantly....and Jim is dry and warm inside of his wonderful shoes that he inherited from his brother-in-law John.  They're an expensive pair and well worth whatever they paid for them!  I thought about my tennis shoes but decided to stick with my sandals.   And, once home, they dry rapidly for the next day! 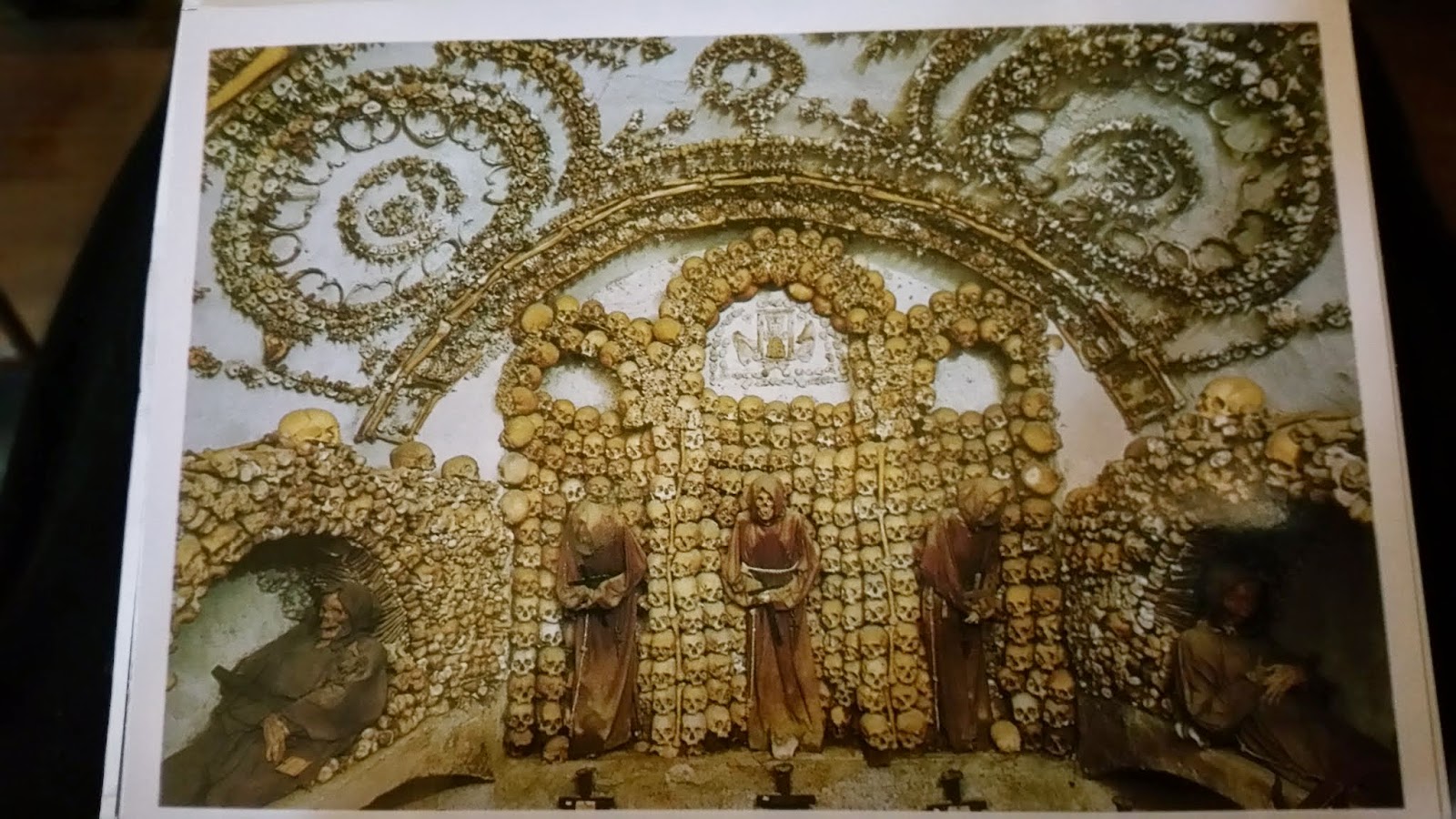 Our first stop on the Metro was at Barberini where we walked directly into the Capuchin Crypt and church.  The photos from the Crypt are taken of post cards as we were not allowed to take photos inside.  Amazing...totally different from what I'd expected.  Bones were used to create art!  And for an extra bonus; there was a painting by Caravaggio in the Crypt.  We spent some time in the church admiring the beautiful paintings and a place to while away some time as we were early for our next adventure.  I noticed that the church has padded kneelers that automatically fold up when not in use so that no one steps on them!  Very creative! 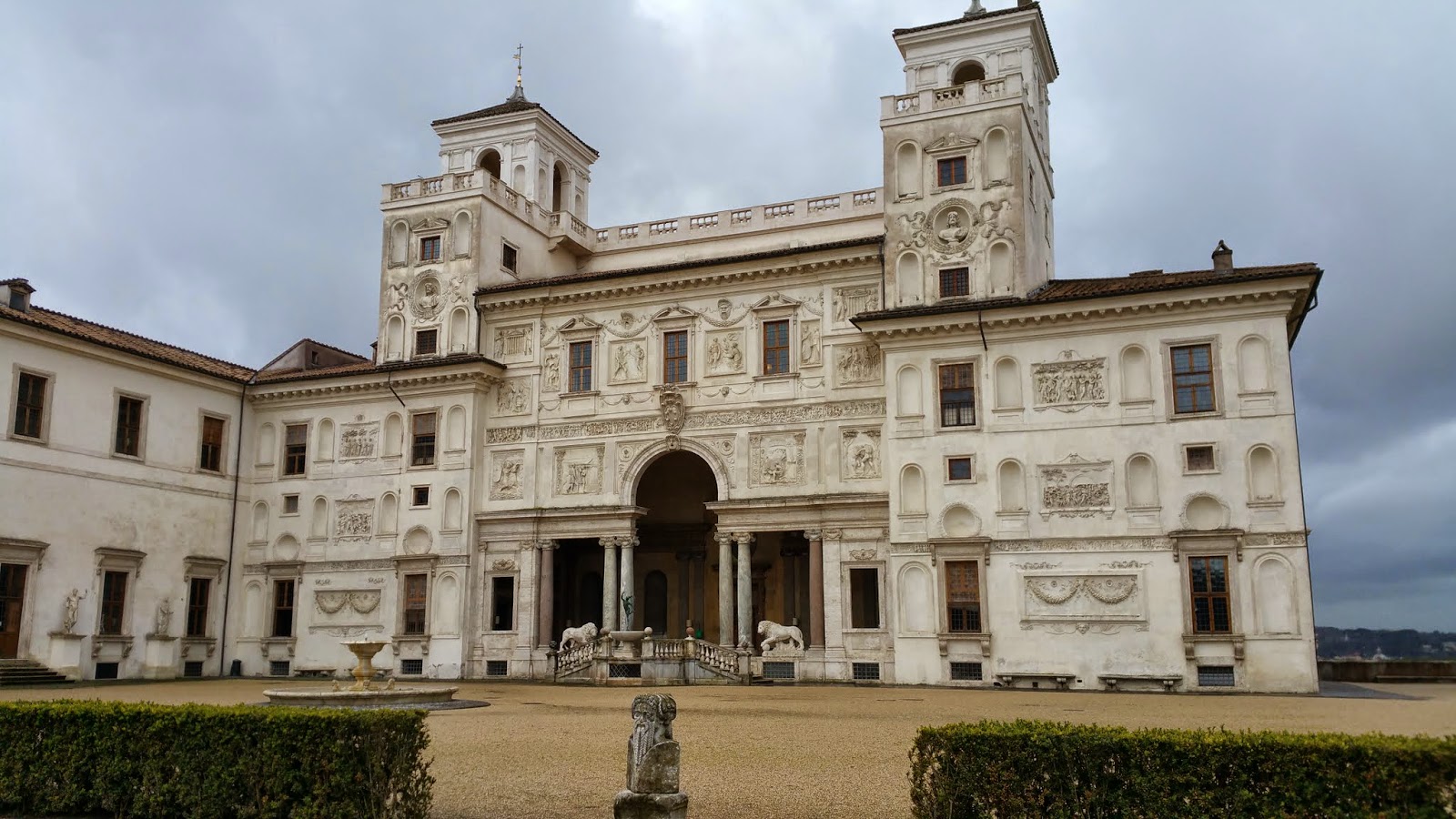 By half past eleven we were back out in the rain to the nearby Metro Stop; once on we got off at the very next stop of Spagna and rode the elevator from inside of the Station to the top of the Spanish Steps.  From there it was only a short walk to the former Medici Villa that is now owned by the French government and is known as the Academie de France a Rome.  I was wrong yesterday when I told you how Napoleon acquired this property; when the last of the male Medici family members died the property was sold and he purchased it.  Then he donated it to the French Government.   In 2009 we learned today; the government decided to let the public have more access to the property.  They now rent rooms to a few guests and have instituted tours for the public.  They still have about twenty artists that live on the property with their families while they produce new art for the world. 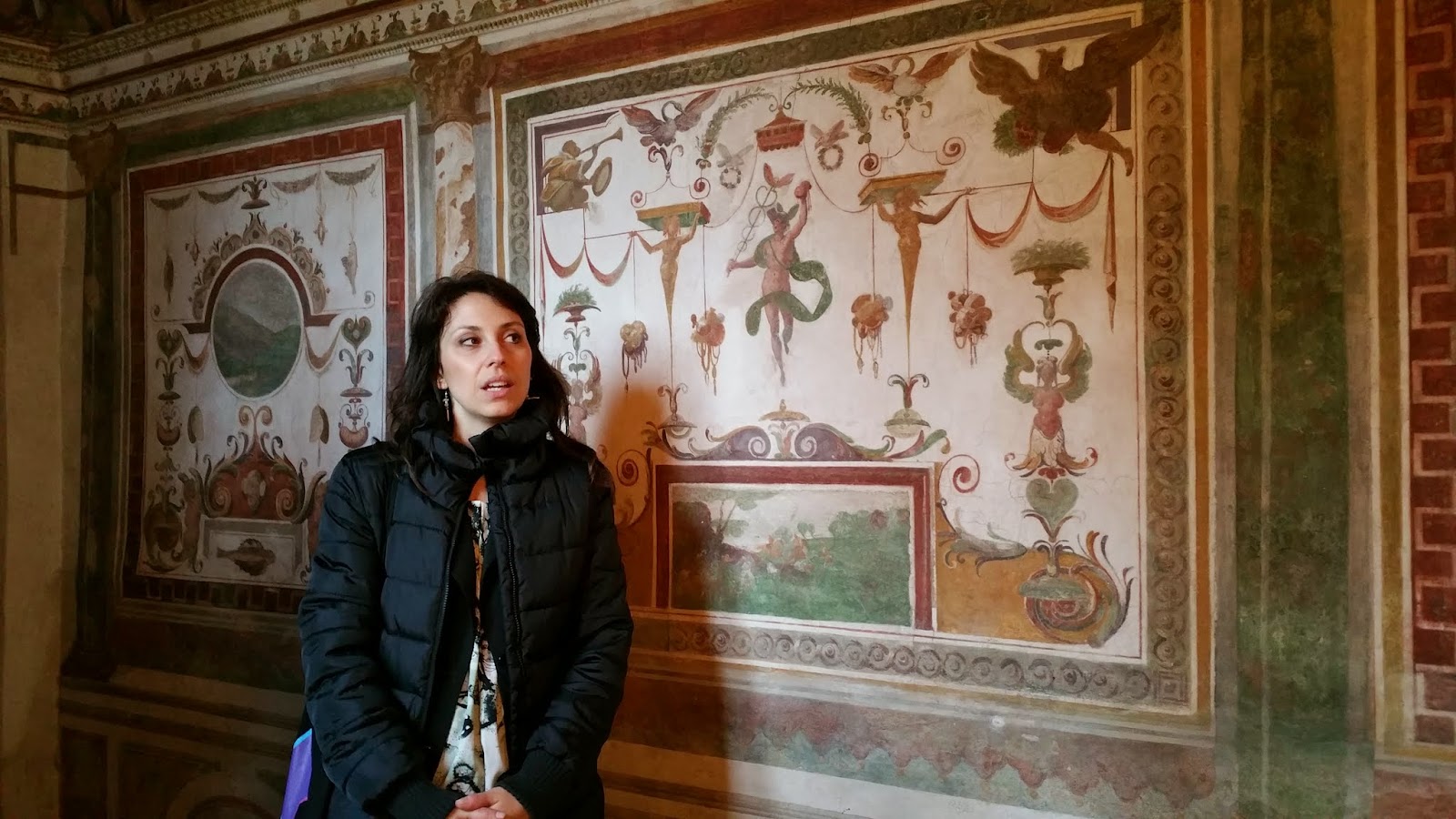 There is an English Tour at noon every day.  We really enjoyed our tour through the gardens and into a select series of rooms in the tower. We also visited beyond the garden a retreat that had been built in a quiet area for study and contemplation in the 1500s.   In 1985 they discovered under whitewash paint in these two small rooms, remarkable painting by Jacopo Zucchi in the sixteenth century.  Because of the rain the guide was allowed to also take our small group of six into the Grand Salon that is not normally on the tour. 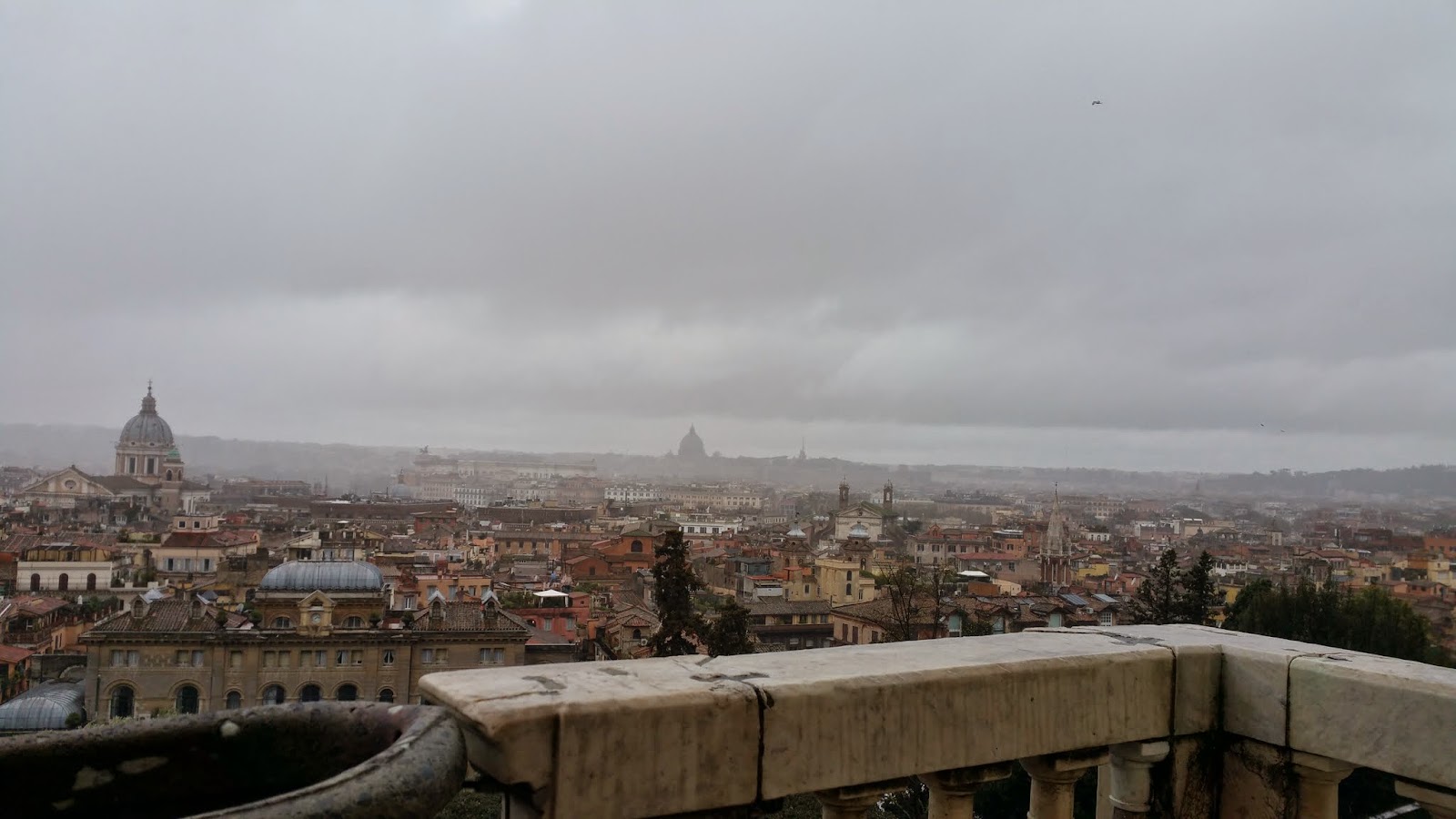 Beautiful tapestries from the fifteenth or sixteenth century that have recently been completely restored decorated the walls.  But best of all for me was the view of Rome from the balcony...we were not allowed to step out onto the balcony, only enjoyed the view from the window.   What a sunset that view would be on a good day!  The doors into the room are original and in the lower corner of one was a small door for the cat to go in and out of.

Thoroughly soaked we jumped back on the Metro for a fast trip home.  Lunch, dry clothes and we were back out in the rain.   This time we took the bus # 46 and headed for the area around  Largo di Torre Argentina where we had about three blocks to walk to the Crypta Balbi.  Yep...the final free museum using the ticket that we purchased on Sunday!  We'd managed to use all four within the required four days! 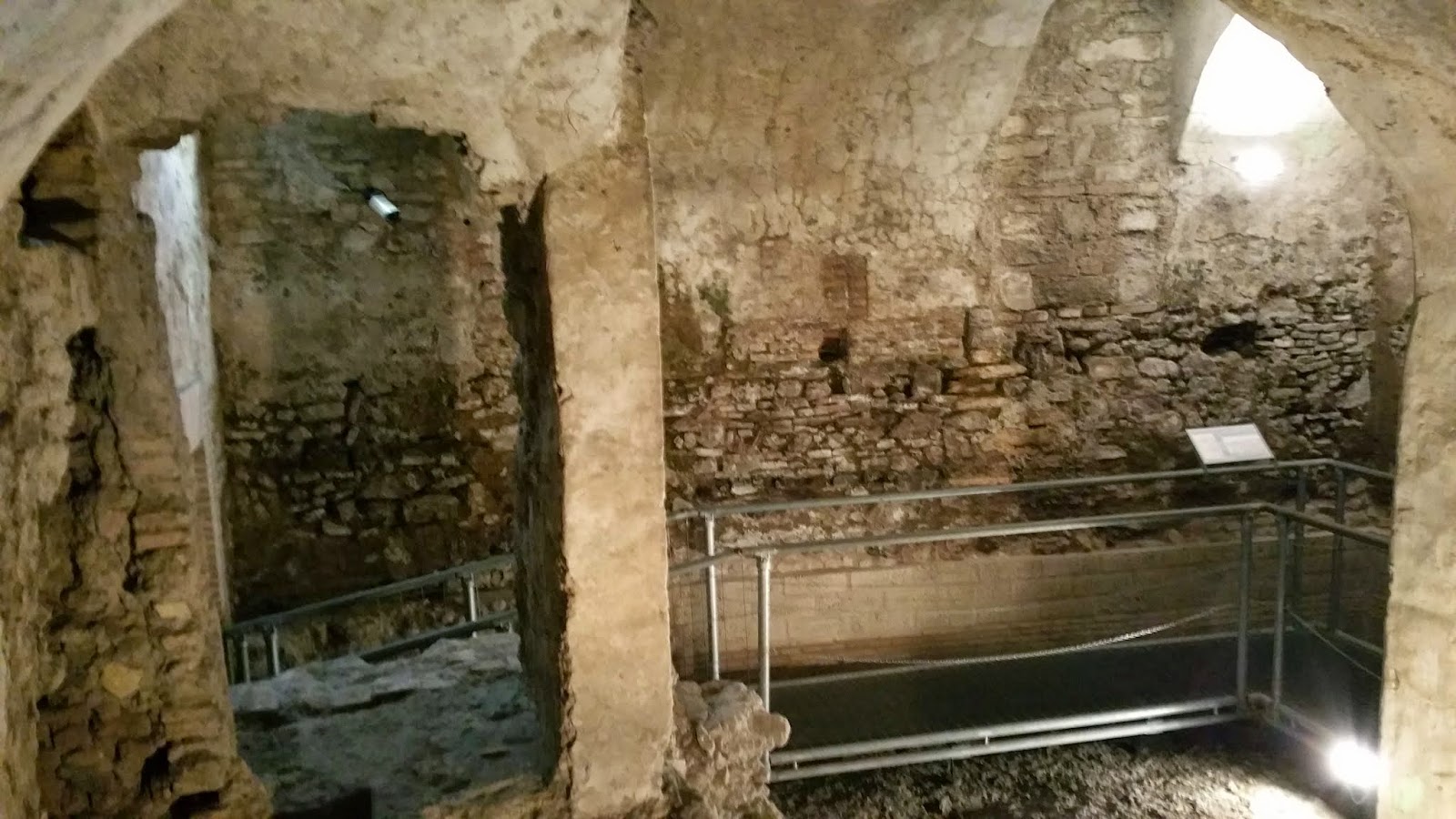 The Crypta Balbi was very interesting; various building were built on this site from the fifth century including a theater at one time.  Many historical pieces of information and several floors above the crypt area that housed displays of artifacts found during the archeological excavations.  Something to see on a slow day when you've seen about everything else; but it was fun and challenging to get there on a rainy day!   We walked several blocks over to Via Venezia where we caught the #46 bus towards home.  Everything we had with us was soaked by the time we arrived home.

The evening was spent in a very warm room drying out our clothes and things while we searched the Internet to find a new lodging in Paris.  Seems as though the owner of our apartment had to cancel.  Airbnb is being very helpful and even gave us a few extra dollars to help find a new place at this late date.  We seem to have located a very good one right in the same area and have already been accepted by the owner.   The Internet is wonderful!

And so another day is over and we're closing this journal.  See you tomorrow.