Walking on the Ancient Appian Way 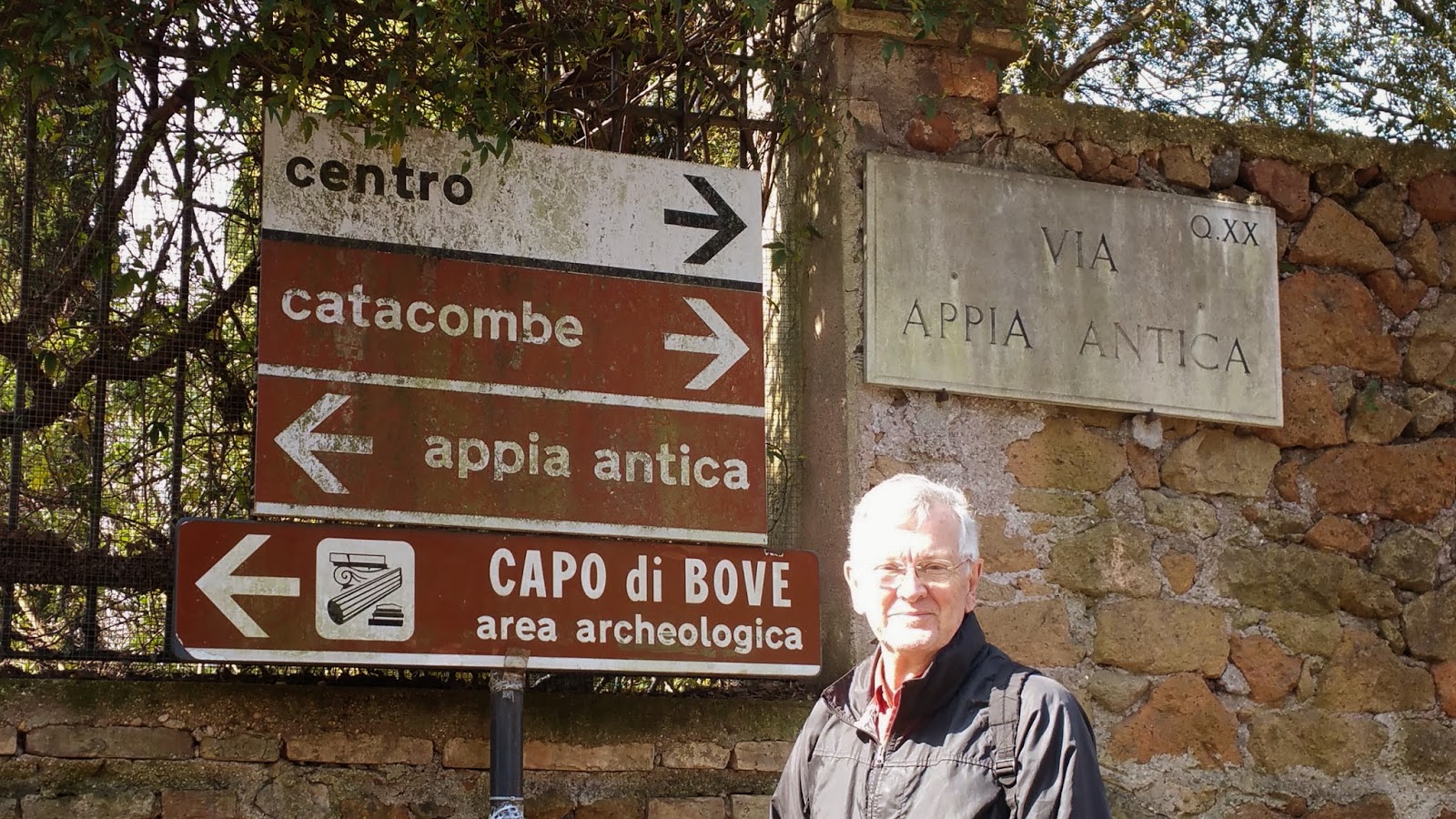 It's Thursday and we were up and out the door by 9:30 am this morning.  First we caught the A Metro and road it all the way past Termini to Colli Albani; a long ways outside of the walls and on the way to the airport.   There we got off, crossed the street and found Bus # 660, confirmed with the driver that we were on the correct bus and climbed aboard.  We waited about fifteen minutes and then we were off for the fifteen minute drive to our starting point for visiting the Via Appia Antica...or the ancient road built by the Romans centuries ago. 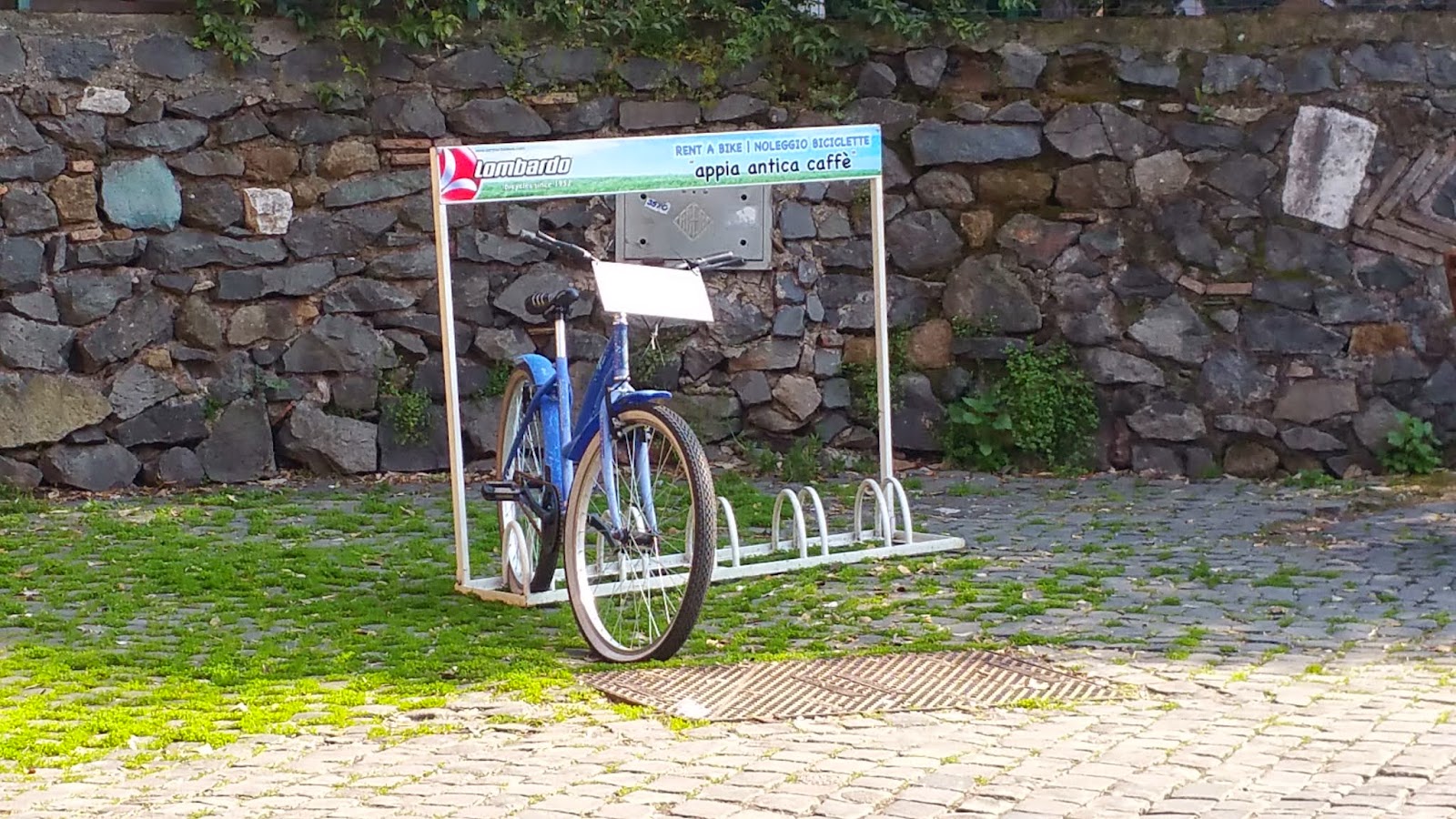 We talked about renting bicycles but were hesitating as we knew the road was difficult and often there would not be much space on the edge; but the choice was decided for us when we saw that they only had one bicycle available.   The weather was sunny and beautiful but still cool enough for light jackets.

There was lots of cars zipping by but we had a narrow strip to walk as we looked through gates at private home that border the ancient road.  This road is closed to traffic (except by permit for residents) on Sunday; but today there were many cars and buses on the road. 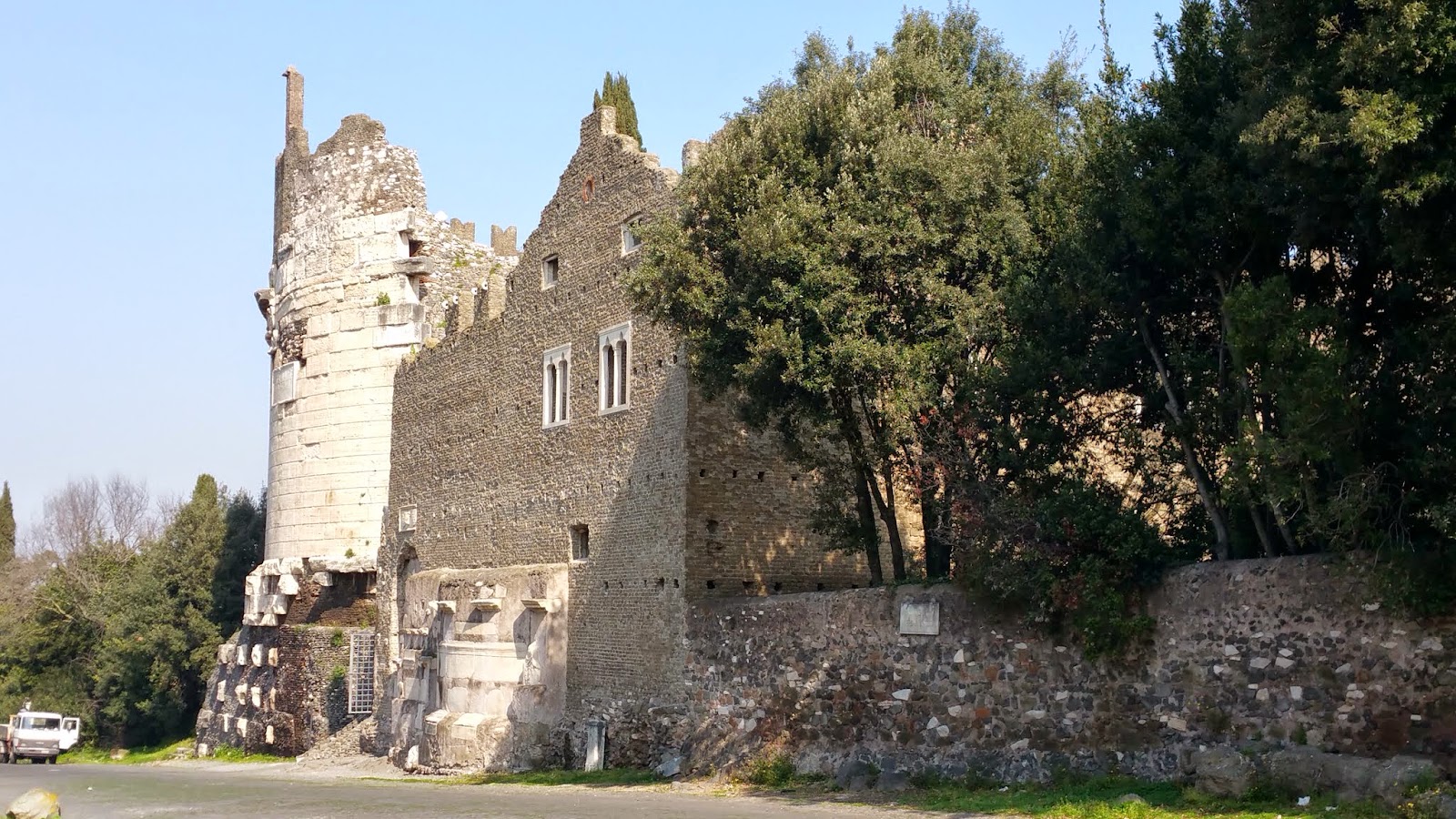 We looked through the entry at the remains of the Tomb of Cecilia Metella....we may go back tomorrow to see more of this as we purchased a ticket later in the day that is good for three sites.  From there we walked along the edge of the Villa of Maxentius, the suburban home of the emperor who was eventually defeated by Constantine in A.D. 312.   The space is huge as it once contained a chariot racetrack for his personal pleasure.  It held ten thousand fans! 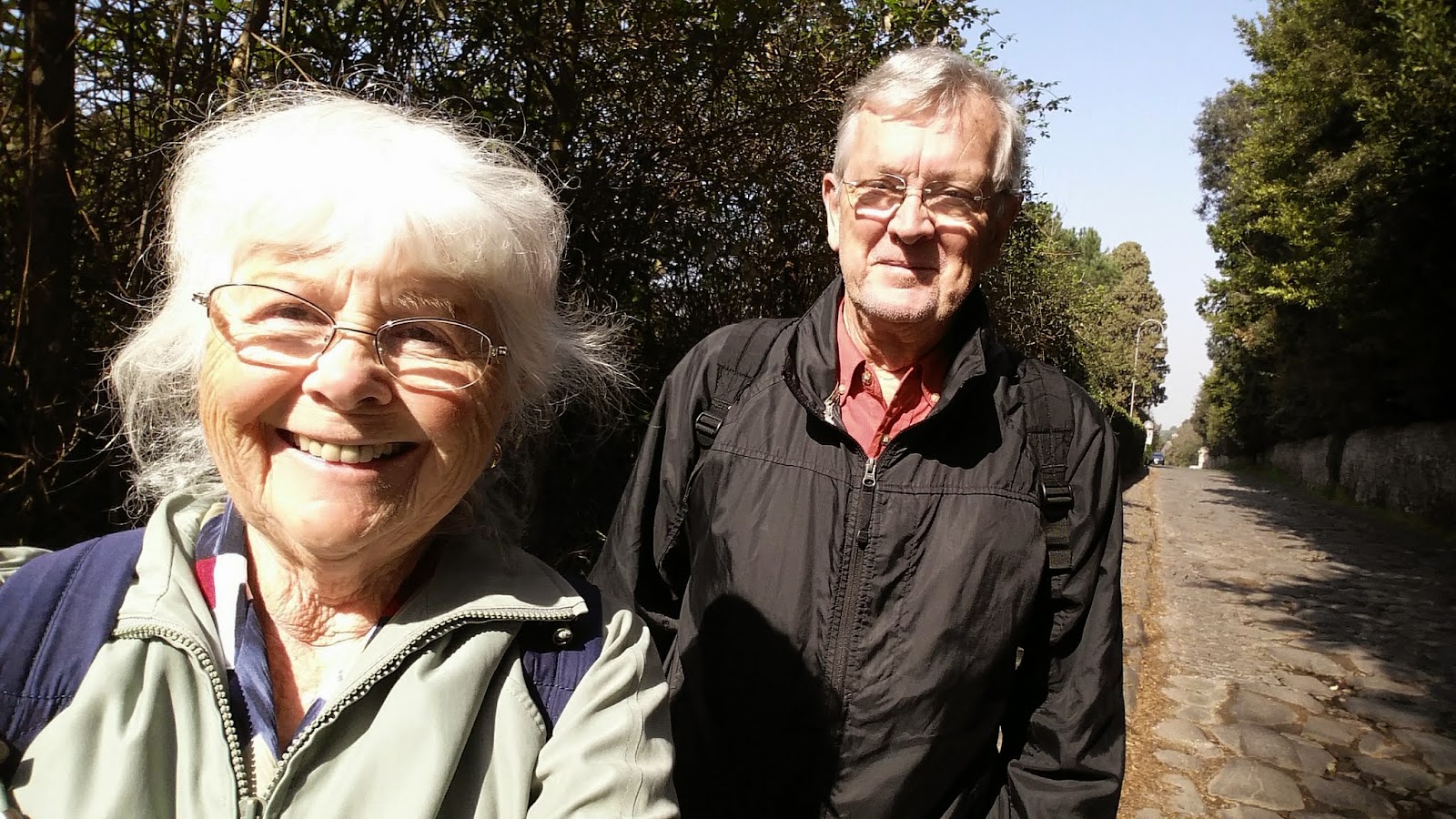 There is also a beautiful bust of Jesus by Bernini in the church; his last work that was completed when he was in his eighties.   It was lost for centuries and just recently found in 2004. 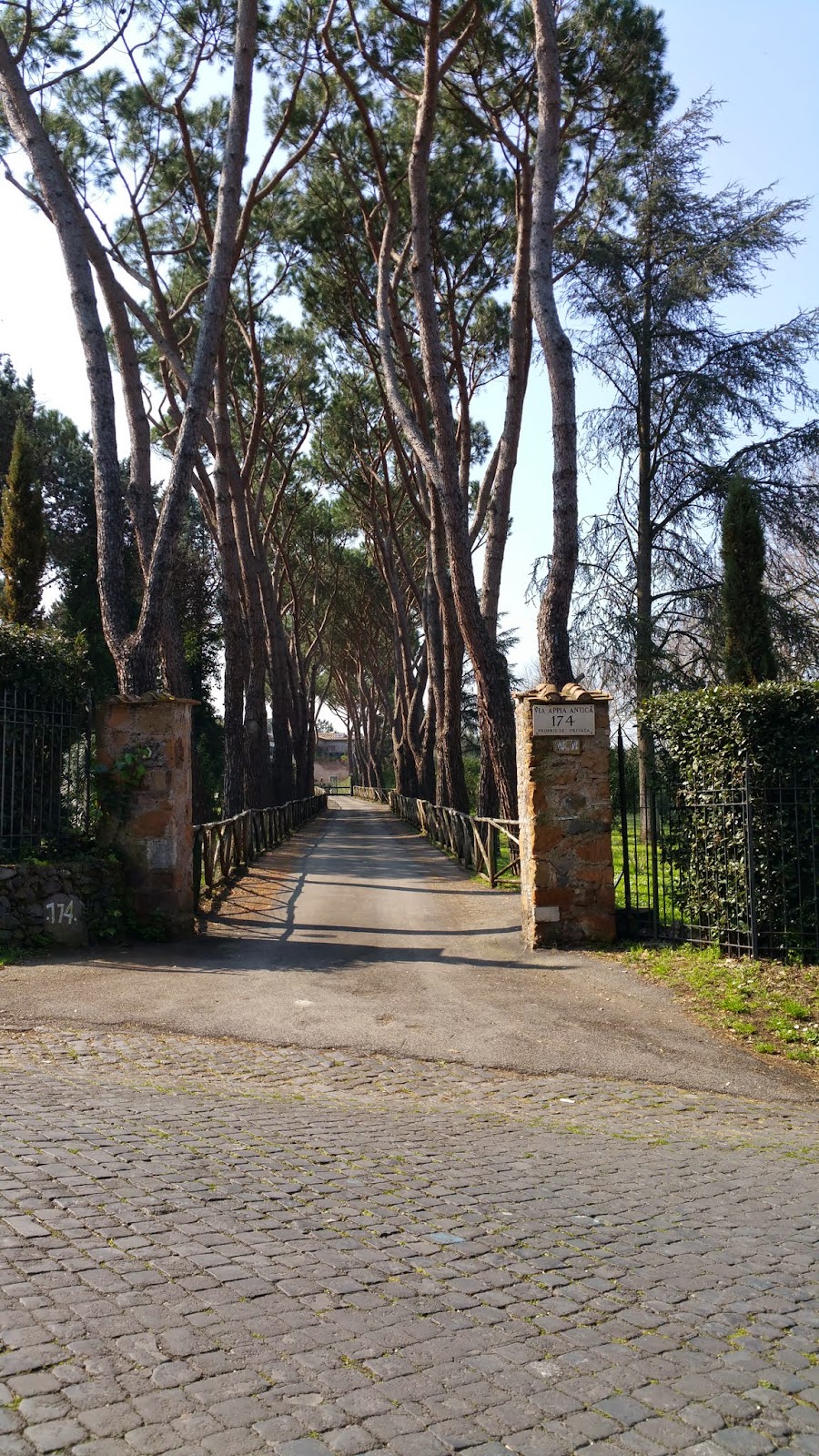 We had half an hour to wait for the English tour of the Catacombs but it was well worth it.  Sorry, no photos while we were down underground.   We were down there for about thirty-five minutes.  She told us how the earth in this area was rather soft and easy to dig, volcanic; but once exposed to the air it became rock hard.   Perfect for creating miles of burial sites under the ground.

Back above ground we started walking North towards Rome looking for bus # 118 that would take us back to Rome.  The road was extremely narrow and traffic was flying by us so close we could have touched the vehicles if we'd put our hands out.  And in this section there were tall walls on each side of the road with no walking paths.   But we found a bus heading back where we'd come from but at that point we really didn't care.  We hopped aboard and found out that it was a "circular route" bus and we eventually came back to where we boarded and were then heading North.  Patience was the name of the game today. 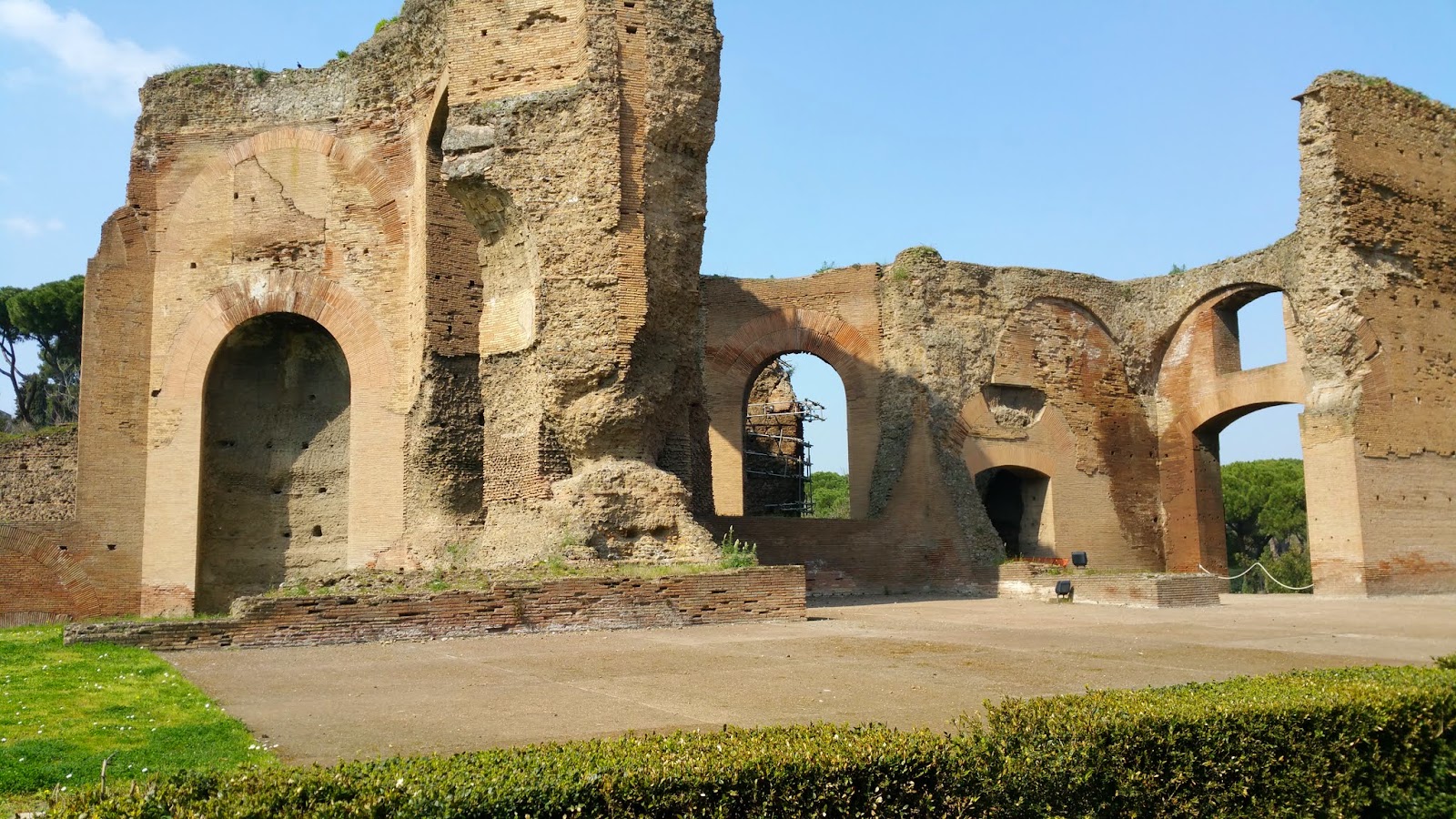 The bus took us all the way to the Baths of Caracalla (Terme di Caracalla), located on the edge of the city near the walls that surround Rome.  The buildings are huge and were built in A.D. 216; the baths were so large they could accommodate sixteen hundred visitors at a time.  In it's day it was the place to hang out but when Goths severed the aqueducts in the sixth century during a war they tumbled into ruins and were no more.

Soon we were back on the same bus and jumped off near Circus Maximus when we saw the Metro sign.  Heading home we were tucker out and called it a day about 4 pm.  We'd done four and a half miles by the time the day was over.  Once home we worked on the Italian cell phone and now have learned how to use it to text so Jim has a phone again.  It's a little flip phone but it works.

Another day is nearly over and we've had our dinner in the apartment again.  One of these nights we'll had to go out to dinner again.  It's so easy to eat at home!   Thinking about playing some cards now that the blog is done early.  I finally gave up with using dropbox to transfer photos from my phone to the computer.  I attached the phone to the computer this evening and downloaded them instantly.  Here is the link in case the slideshow is not working below.