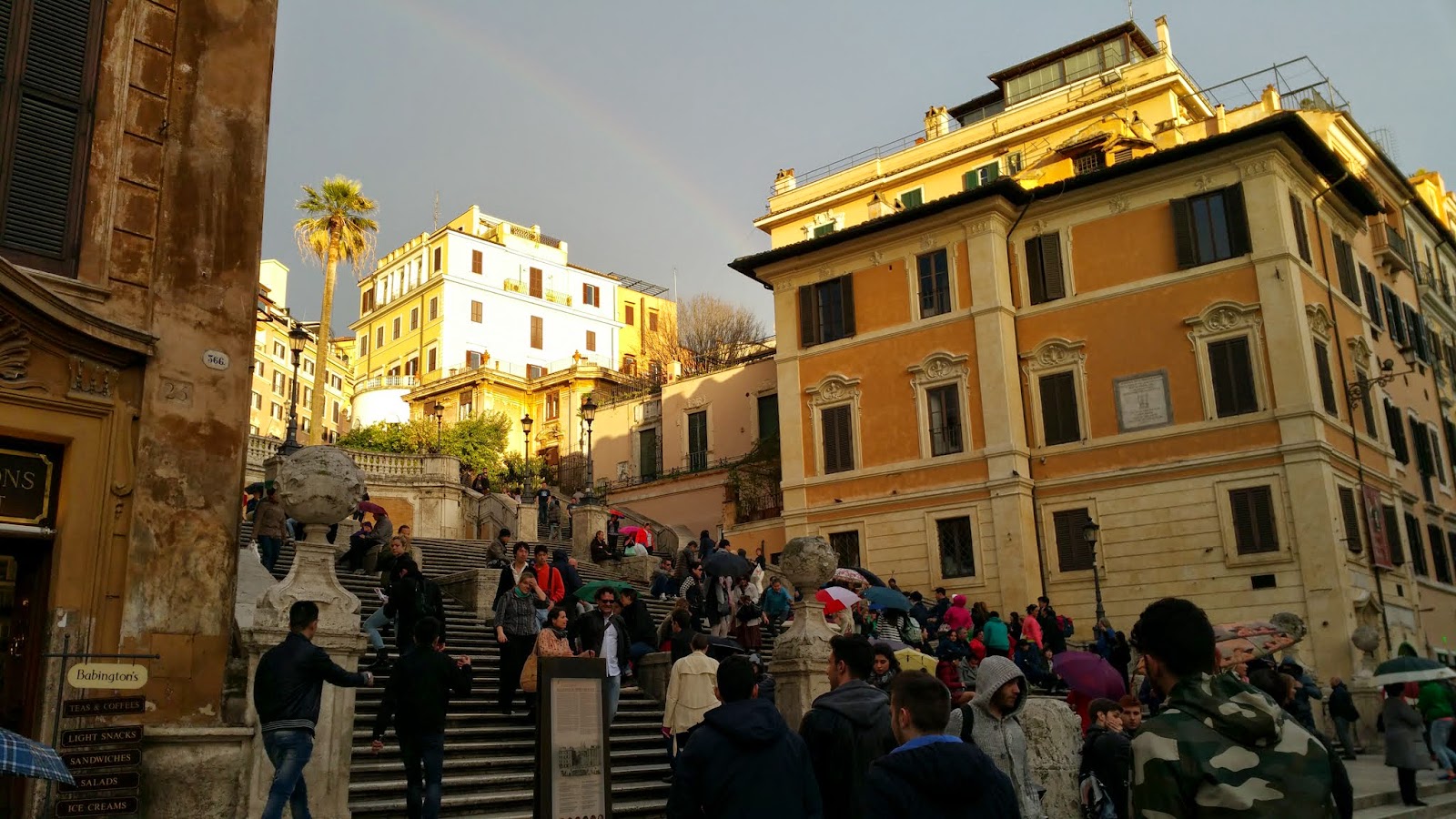 The morning was overcast but dry; but we still carried our umbrellas which was a good thing as about three o'clock we had to use them for about half an hour.  It gave us some glorious skies about six o'clock when we were at the Spanish Steps.  We did 7.1 miles today!

But back to our morning that started about ten o'clock as we climbed aboard the Metro for our short trip to Barberini Station.   The walk to the Palazzo Barberini was short and soon we were strolling through another beautiful palace filled with wonderful art and statuary.  Yes, there are three Caravaggio painting here but one of them is on loan at this time so we only saw two of them. 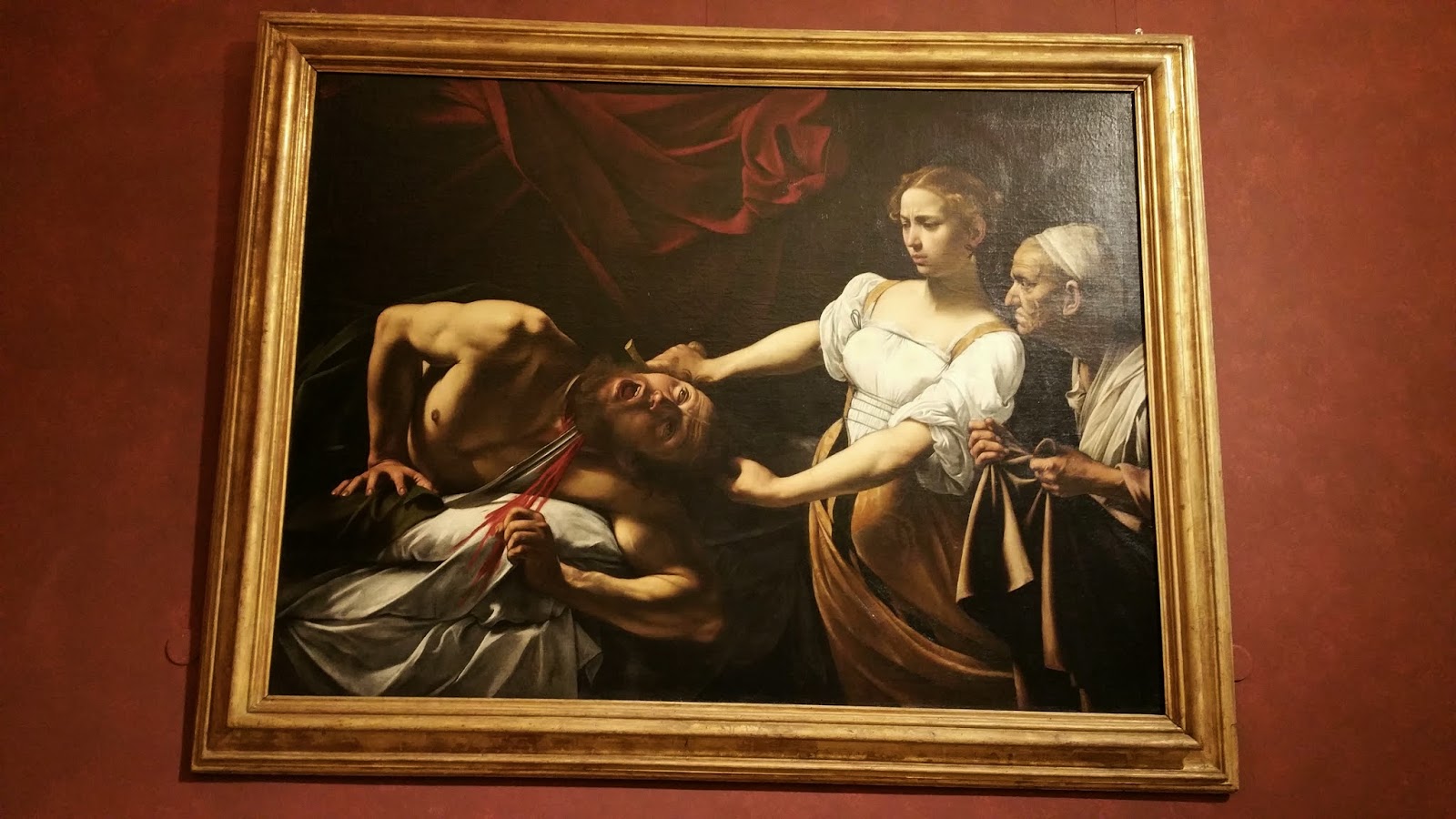 After about an hour we were out the door and back on the Metro to Termini where we switched to bus #40 for our trip to the tram #8 that would take us across the river to Trestevere.   On the bus I had an opportunity to talk with a group of five seminarians from the USA; they were surprised when I asked them about their daily morning walks to different churches for Mass during Lent.  We had planned to do some but so far have not gotten up early enough in the morning to join them.  There is a permanent list of different churches for each day in Lent.  The priests and seminarians who are living in the Pontifical North American College in Rome during Lent call this their "The Stations of the Cross" and walk from the college each morning to the various churches.  Some of them are up to five miles away and they leave on their walk...rain or sunshine...about six o'clock each morning. 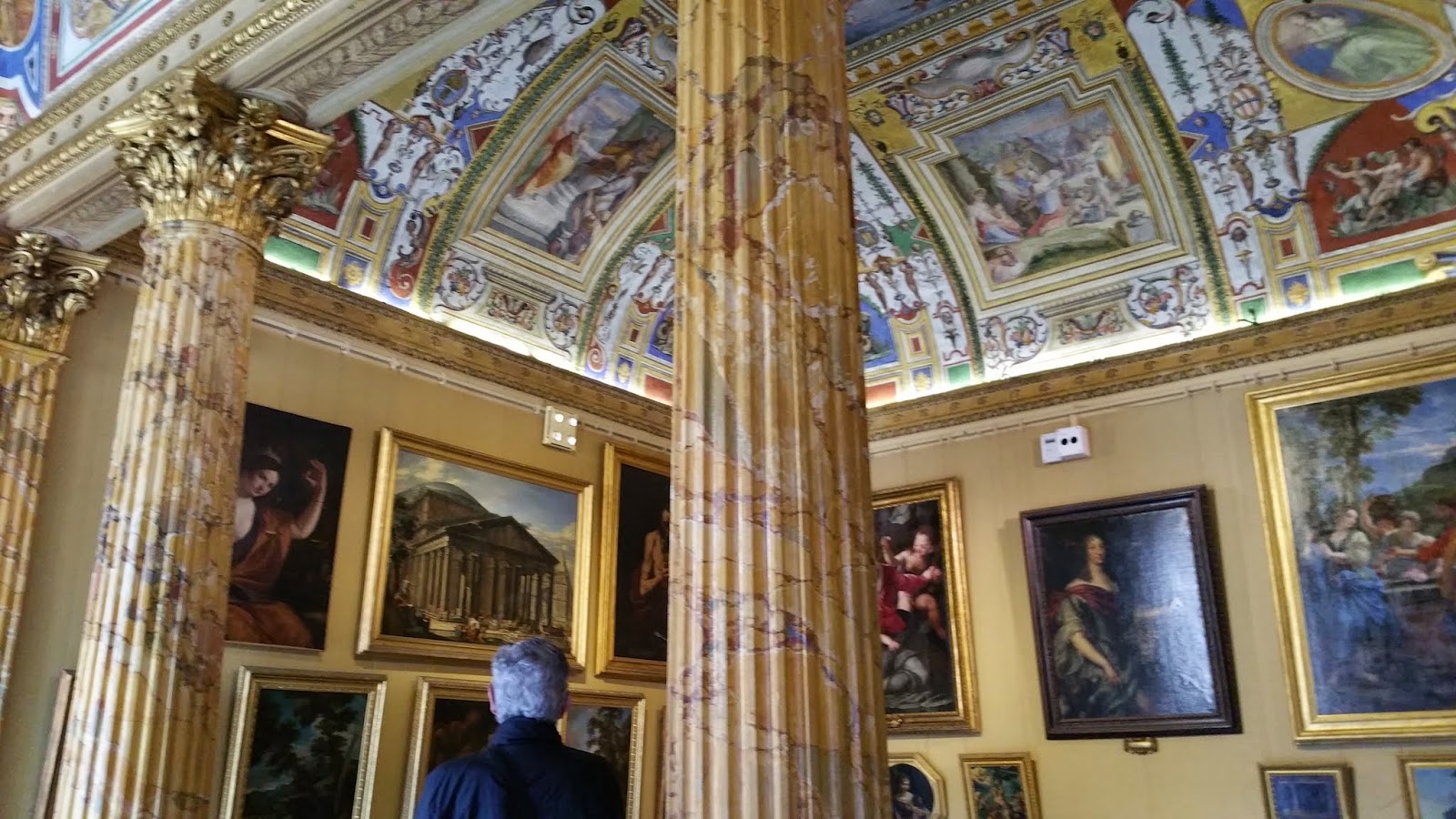 We hopped off the bus and started walking as we waited for the tram and finally decided to walk all the way to our next adventure at the Palazzo Corsini; a huge old palace built somewhere around the eighteenth century on the site of a fifteenth century villa.  Again, an adventure in fabulous rooms competing with beautiful paintings and some sculpture but mostly painting. There was only one Caravaggio and it was out on loan to another museum. 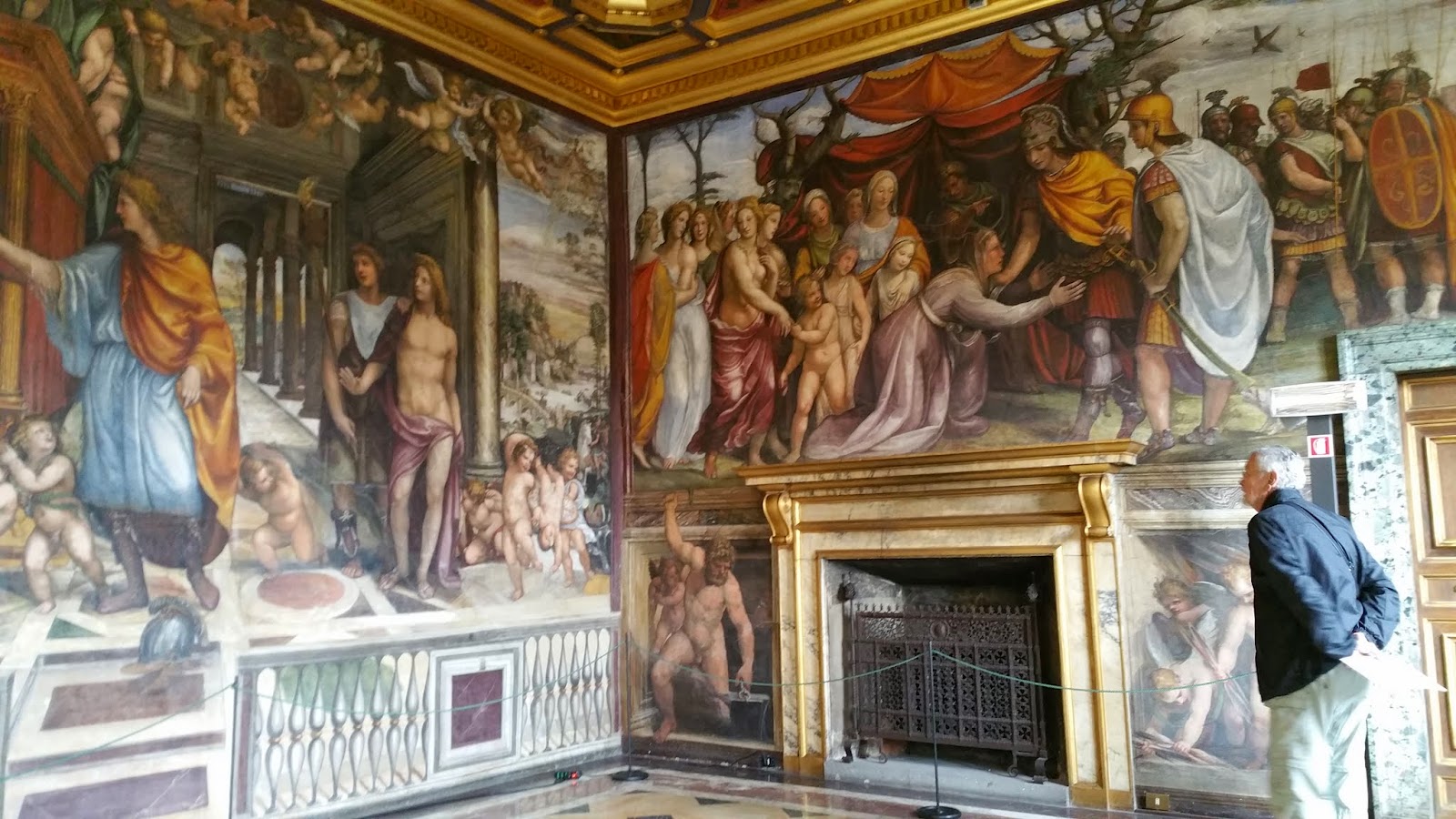 By now it was 1:30 pm and we rushed to the nearby Villa Farnesina just in time before it closed at 2 pm.  It is a small villa so it was easy to visit in half an hour; good art but the walls were what was so great; frescoes everywhere.   You'll love the photos in the slideshow.  The builder of this villa was Agostino Chigi who was the banker for Pope Julius II and became very wealthy.  During parties he would have his guests throw gold plates out of the windows from the top floor into the Tiber River that flows directly behind the villa to demonstrate his wealth.   They didn't know that he had servants with nets to catch them down river. 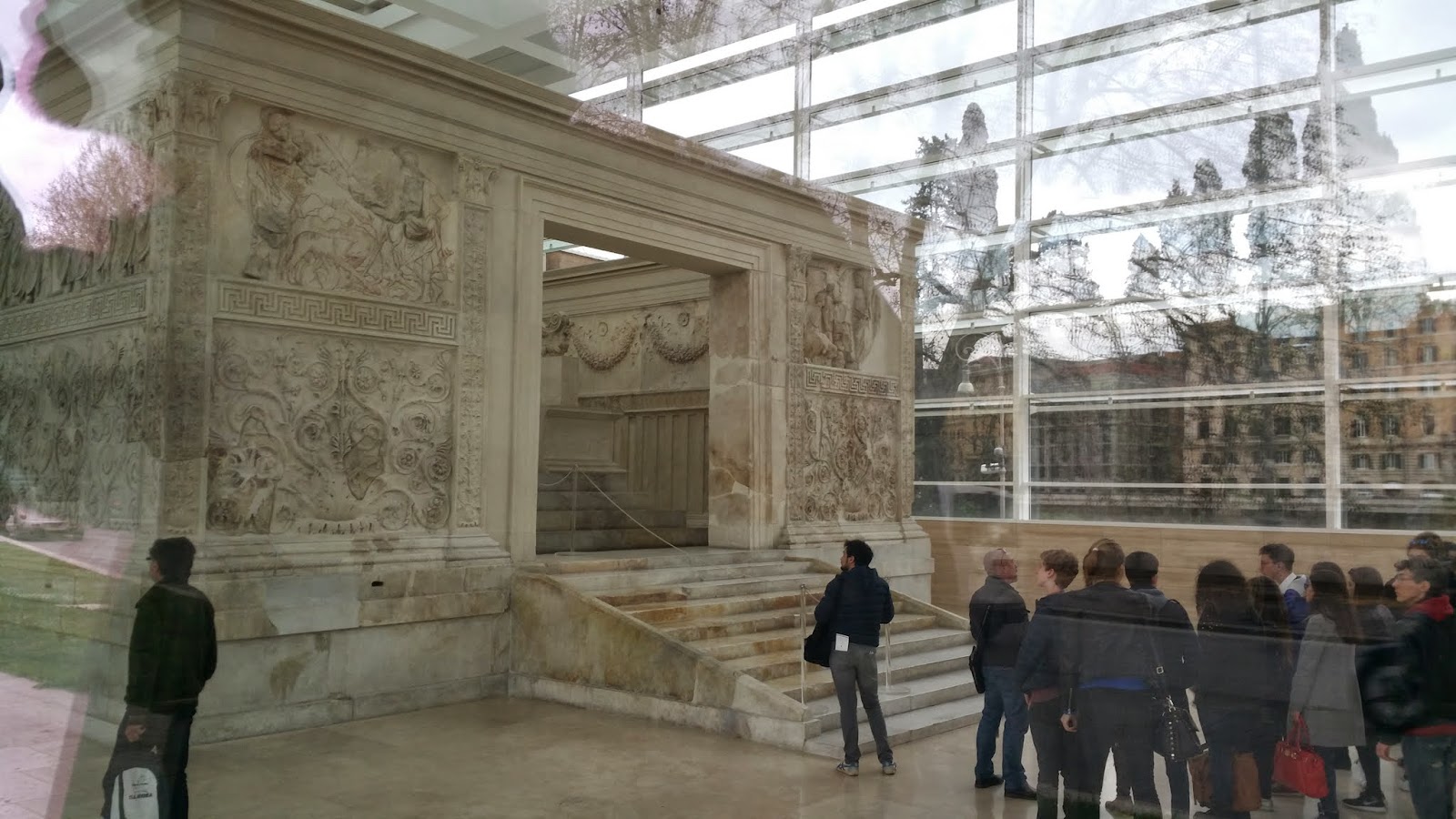 Walking slowly back towards the river we again crossed the foot bridge at Ponte Sisto to the east side of the swollen river and continued walking north.  We finally agreed to catch a bus that took us along the river to Ponte Cavour where we jumped off to walk over and see the very modern glass structure that houses the very ancient Altar of Peace from the year 9 B.C.   Built and used by Augustus to make sacrifices to the gods.  His tomb is across the street.  We took advantage of the huge glass windows and viewed it from outside; the lines were long and the price was at 14 euros because of a special exhibition.  The site is called:  Ara Pacis Augustae.

It was starting to rain as we walked across the Ponte Cavour towards our bus # 49 that soon took us home in time for our last trip to the grocery store for supplies for our final two days in Rome.  Since it's Friday we decided to have some fun and at five o'clock we used the Metro to go to Spagna Station where we walked the short distance to the McDonalds for Fish Sandwiches.  They've totally remodeled the restaurant that has been there for at least twenty five years.  Downstairs is now devoted to a very fancy McCafe and the food is all upstairs where there is seating for four hundred.  A woman with perfect English by the name of Jacqueline waited on us and was wonderful.  It was a great experience and when we returned to the Metro the Spanish Steps were ablaze with wonderful lighting from the storm clouds mixed with the slowly fading sunlight.   Each photo was different!

Soon we were home and enjoying a bottle of wine, fresh pears and chocolate for dessert as I typed this blog and Jim researched tomorrows activities.  So until tomorrow....