Visiting Outside The Walls

Saturday morning we were up and out the door by 10:30, walked the half a block to the Metro Station and after purchasing some All Day Passes we were off on the A Line all the way to Termini where we switched to the B Line to St. Paul's Outside the Walls (Basilica San Paolo Fuori le Mura).  The walk from the Metro Station to the church is only two blocks.  Once you are outside, walk through the small open market, and you can see the back of the church and the bell tower immediately. 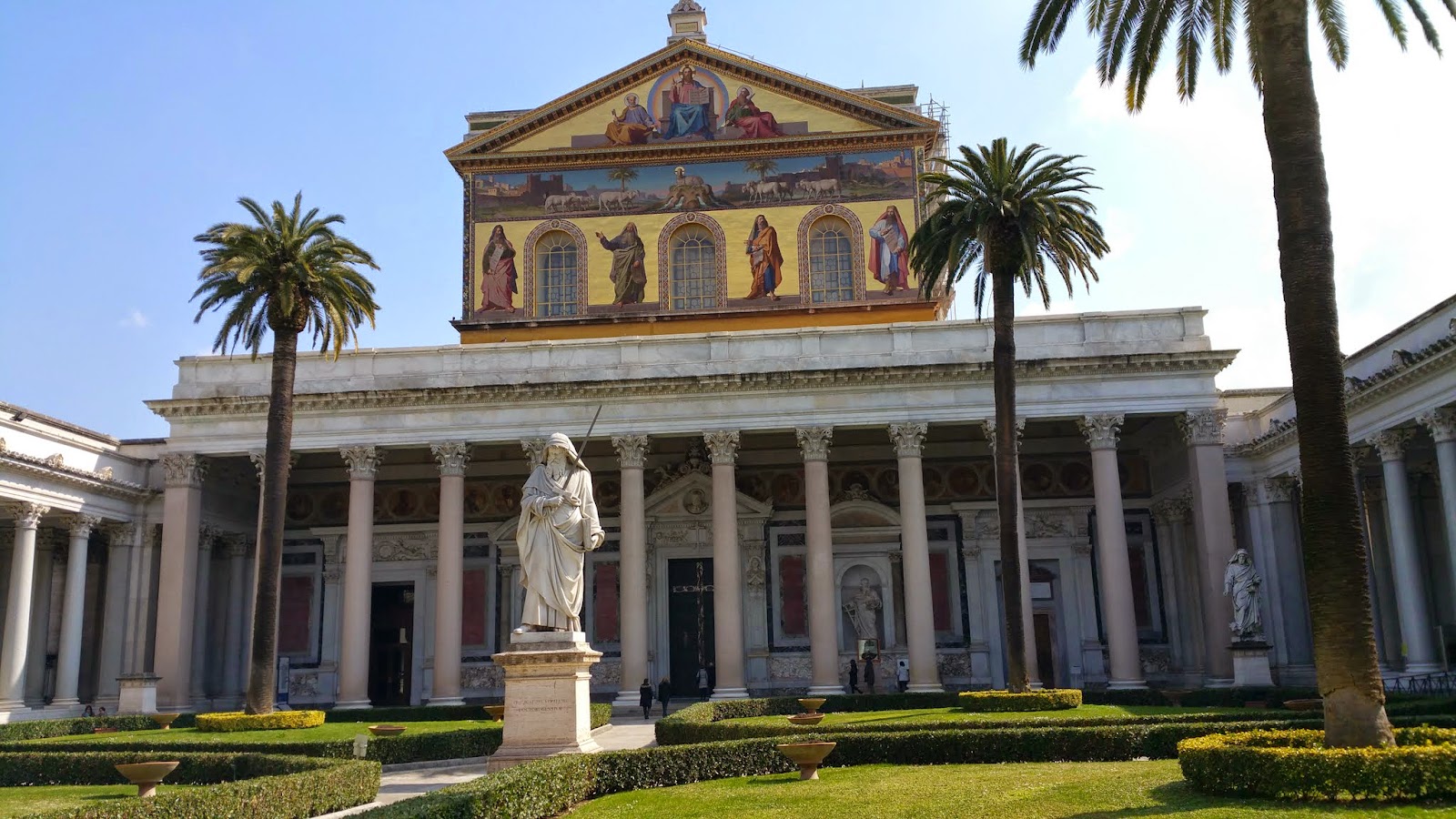 The church was originally built in A.D. 380 and was the last major construction project of Imperial Rome.  It was also the largest church until St. Peter's was built.  That church burned in 1823 and the neoclassical church we see today was built on its footprint.  The bones of St. Paul are buried under the altar per new tests conducted in 2009.
Ringing the upper part of the church are round mosaic portraits of 266 popes, from St. Peter to Pope Francis.  There are only six empty ovals...what will happen when there is
"no room at St. Paul's" for a future pope?   Some believe that it may be the end of the world??   This is especially important because of the recent news that Pope Francis intends to also resign early like Pope Benedict...maybe we'll use the ovals faster than intended.  Since there have been seven (or eight) during my lifetime...will my grandchildren live to see the last oval portrait? 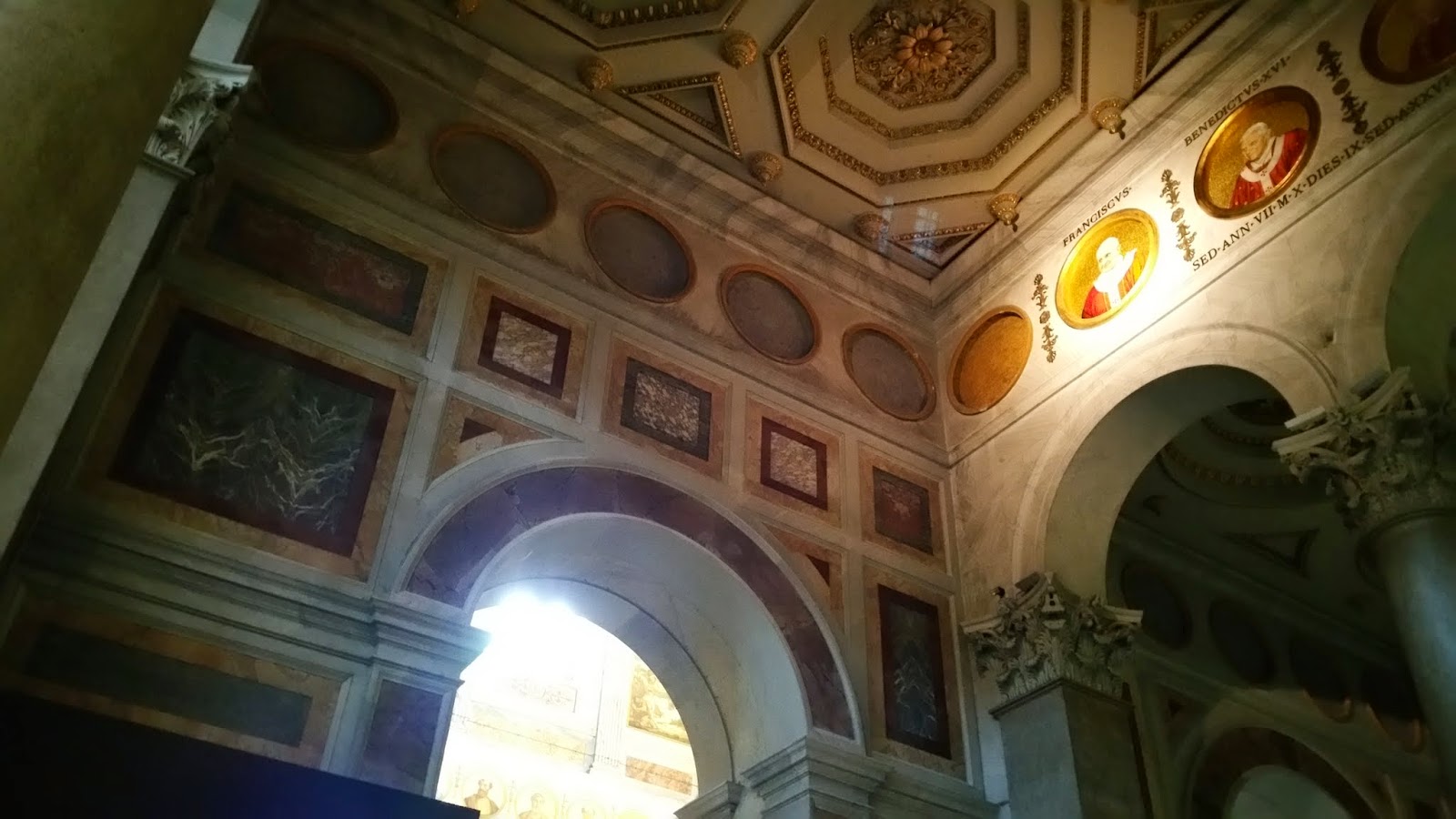 We enjoyed the huge marble columns both inside and out in the courtyard entry.  The alabaster windows light the vase interior giving it a heavenly glow.  The 13th Century mosaic filling the dome is Byzantine in style...notice the tiny white bug washing Jesus' toe, it's Honorius II, the 13th century Pope who paid for the renovation and it reminds people of his humbleness while getting some credit for the renovation at the same time. 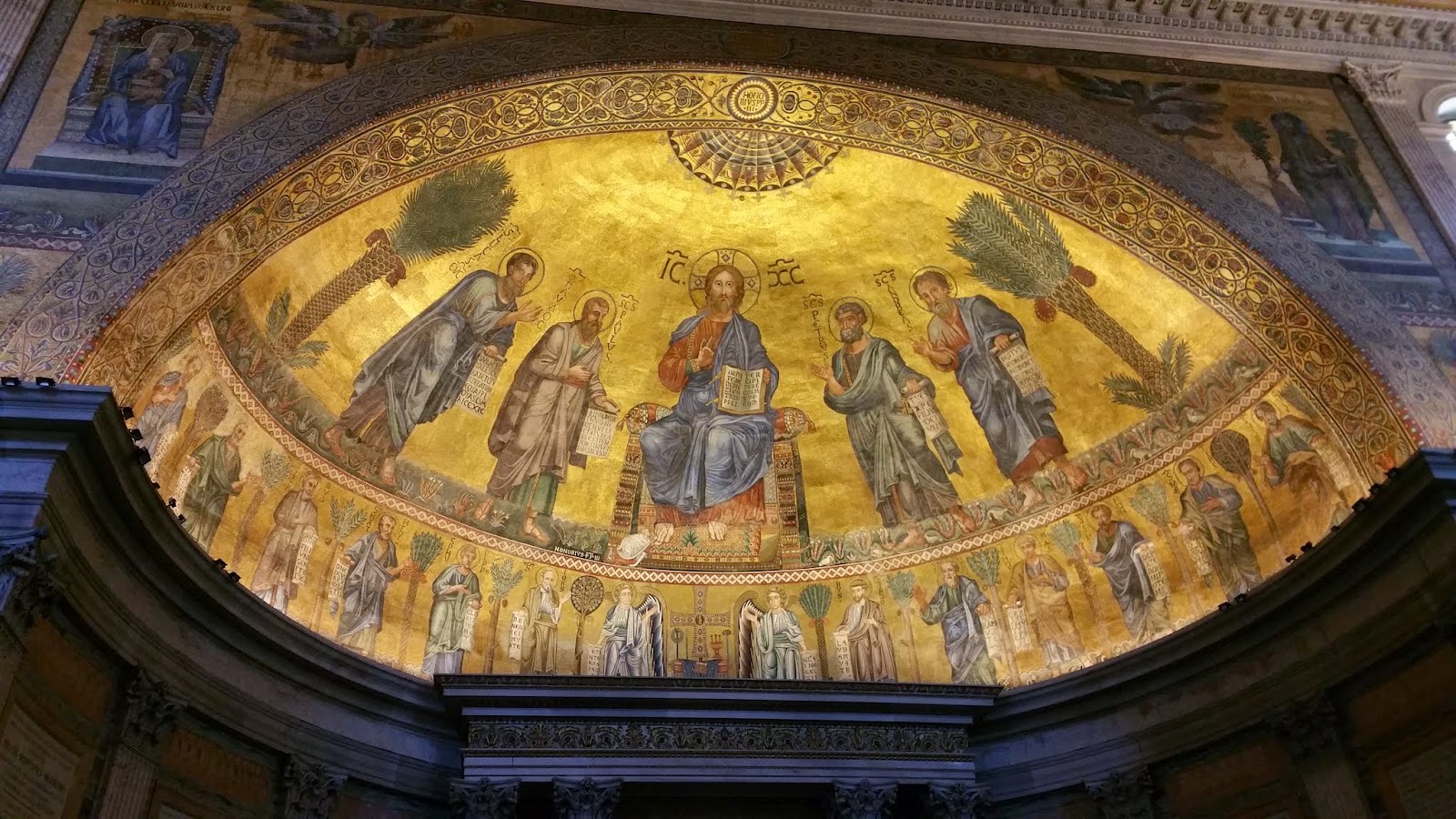 I'm working on inserting photos differently so bear with me as I experiment today.

Be sure to go to the Picsasweb link below for all the photos from St. Paul's Outside the Walls.


Leaving St. Paul's we again boarded the Metro Train but only for one stop.  We got off at Garbatella to see a new Museum for both of us.  Not as easy to find; we made several starts before finding the correct one.  But in doing so we saw some great things in this rather industrial part of Rome that is still "outside the walls". 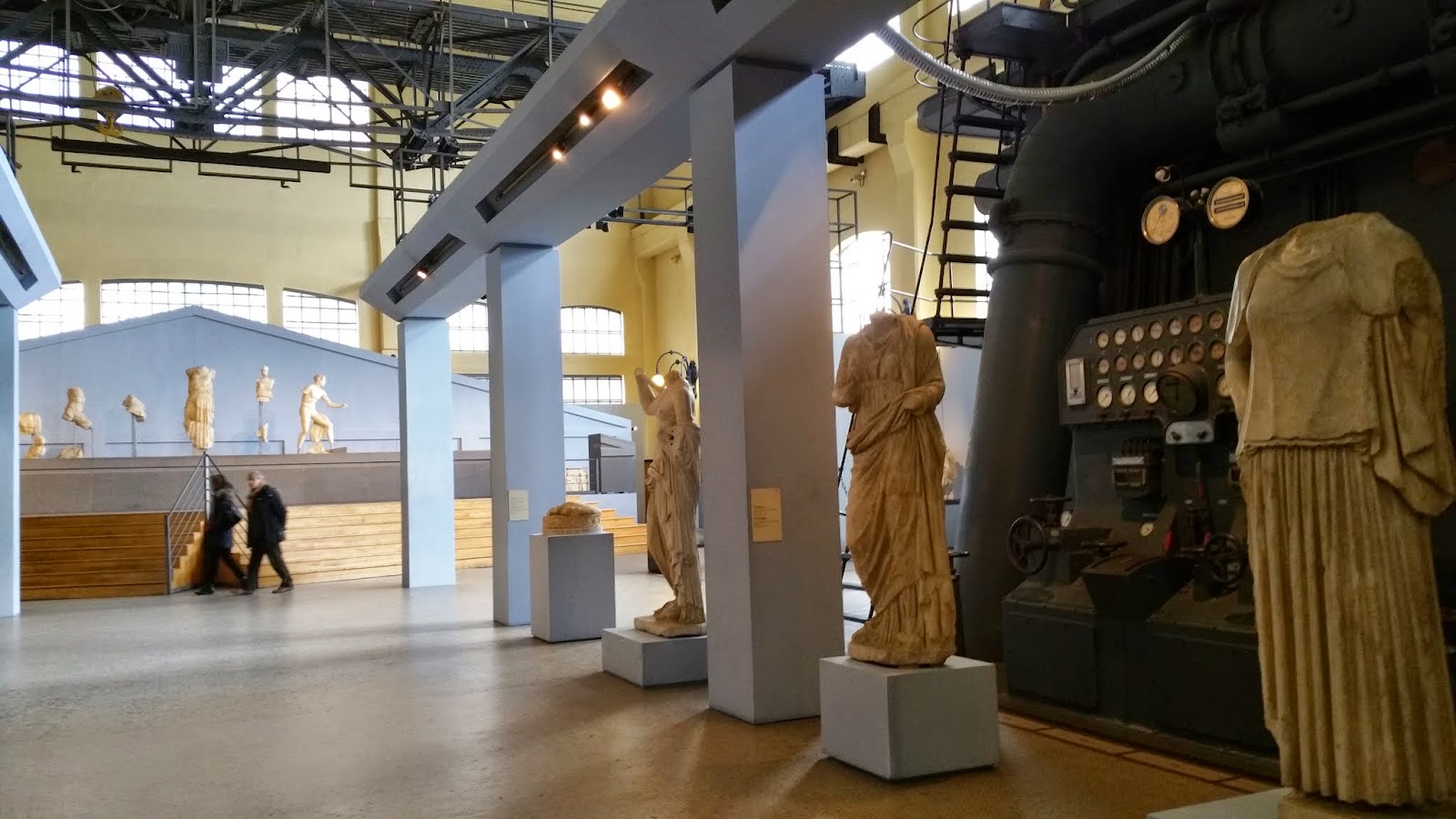 There was a beautiful new bridge, an extremely well done graffiti wall, a building painted in modern art...at first I thought that was the museum...but no...if we'd only read Rick Steve's directions more carefully, we would have saved some time.  But we finally arrived at the Montemartini Museum.  Rarely visited by "tourists" but well worth the time.  It is a 1932 former Electrical Power Plant that still has all of the machines but it also full of beautiful ancient statuary among the machines.  They are from the Capitoline Museum in the city.   By the time we'd finished it was after 2:30 pm and we decided to call it a day and headed back to the apartment.  On the way we had another "journal entry" when we forgot the name of our Metro Stop and got off at the wrong one.  Totally confused we ended up back on the Metro to a stop near the Vatican Museum, from there we had to walk several blocks including a stairway of fifty to seventy steps that took us to a familiar street and our bus # 49.  Ah....home at last and time for a nap and a snack.
About 5:15 we were out the door, back to the Metro and off at Republica Stop for an English Mass in the chapel behind the Sacristy of Santa Maria degli Angelo dei Martiri. 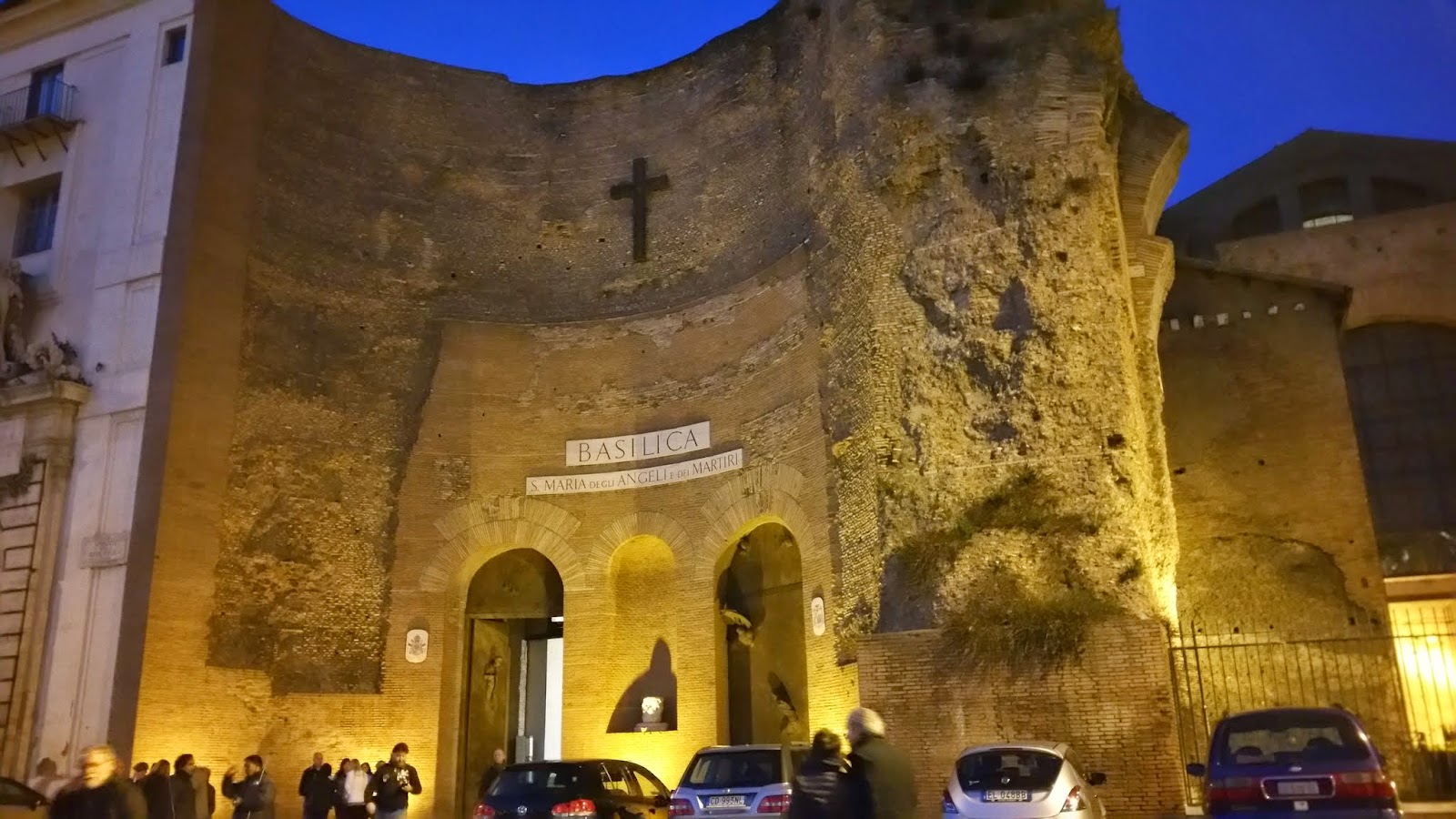 This is the church inside of the former baths at  Diocletian near the Termini Station.  The priests were the Paulist Fathers from Santa Suzanna, their church is now closed for renovation.
Home again, we enjoyed fixing our dinner about 8:30 pm and then enjoyed a late evening getting to bed about midnight.
We figured out how to open our table and found that we now have a large square table that will be perfect for playing Hand & Foot tonight.  Yes, it's raining outside today and we've taken the day off.  Tomorrow will be a busy day as we have the tour of the Vatican Gardens, Via Triumphalis (new excavations) that I've not seen; and the Vatican Museum including the Sistine Chapel and then into St. Peters.  It will be a long day starting at 9 am and possibly in the rain!  So no blog tomorrow as today's story is sleeping until noon...yes we did....and playing cards as we listen to the rain outside and watch the Formula One racing on television.  We purchased the supplies for our dinner yesterday.  But...if the rain lets up we may venture out to the Organ Concert where we went to church last night.
Here is a link to the picsas web albums if the slideshow is not playing below; remember if you can see the slideshow you can click on the show and it should take you to the larger photos: