Climbing The Bell Tower, Visiting Four Museums Plus A Concert 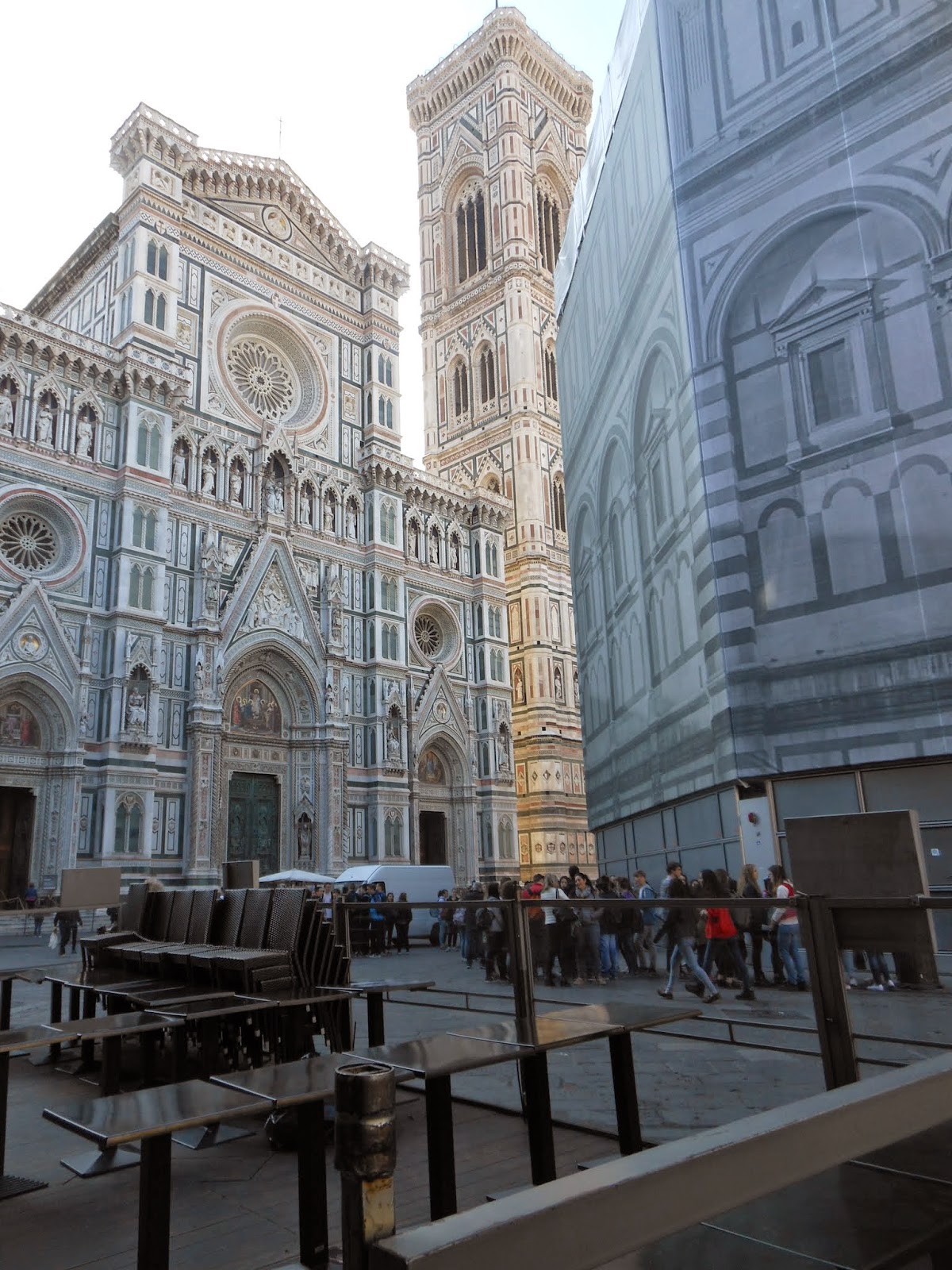 We were up early and out the door before nine o'clock to start our busy day.  The first stop was at the Duomo for the Baptistry; Jim used my ticket from yesterday (one ticket for the Duomo included entry into five areas within 24 hours) and I enjoyed watching the tourists getting their day started.  I've seen everything in the Duomo complex several times and I enjoyed the people watching; even took photos for two teachers and their students while I waited.

By 9:30 am he was back out and since his next one was not open yet we walked around to the entrance to the bell tower that had already opened.  I took the ticket and walk straight in and started my climb up the 414 steps to the top for some great views.  Even got one of Jim down below while he waited for me.  Tough part is that the up and down are on the same set of stairs and half of them are circular steps and very narrow.  No handrails provided; just hard stone walls that you can touch on both sides of you. 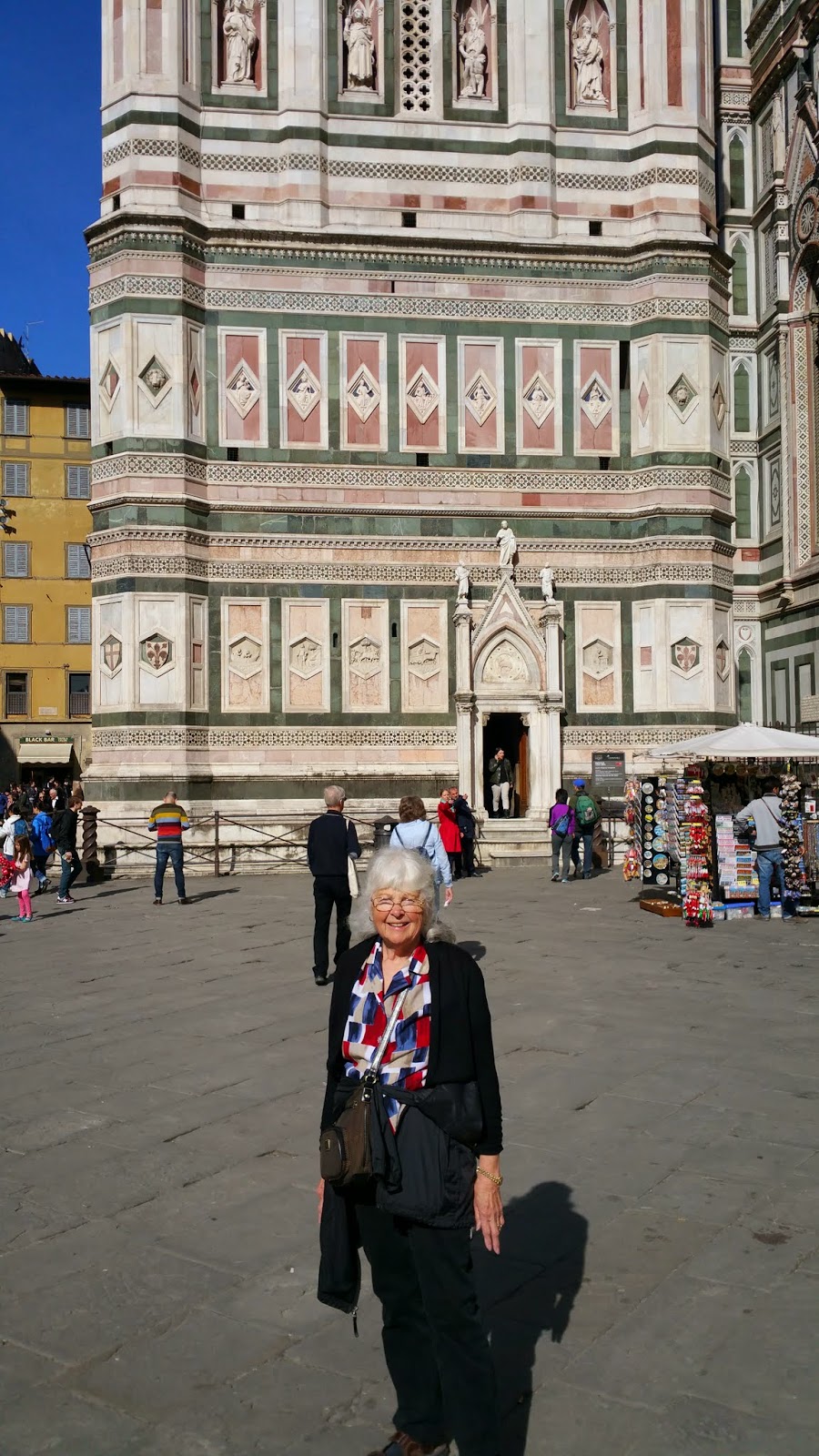 By ten o'clock I was back on ground zero; I removed my jacket and began enjoying the sunshine that was beginning to heat the air.  It was a beautiful spring day in Florence.  We walked back to the front of the Duomo and saw that a line had begun for Jim's next adventure...I waited in line with him for about ten minutes and then he was in and I went to the ticket office where I knew there was 1)  a bathroom for only a euro, and 2) a bench that I could sit on in the shade and read my novel that I'd found in the apartment.  I didn't bring any books with me; only those on my Kindle app on the cell phone.  Jim had asked to borrow the cell phone to use as a camera today.  I reluctantly agreed but must admit he took good care of it and got much better photos than yesterday.

The last museum of the Duomo collection was the inside of the Cathedrale...they'd removed all of the equipment for lighting the fire crackers in the carriage last Sunday...so he got a nicer view of the church and then he went downstairs to view the museum of Santa Reparata. 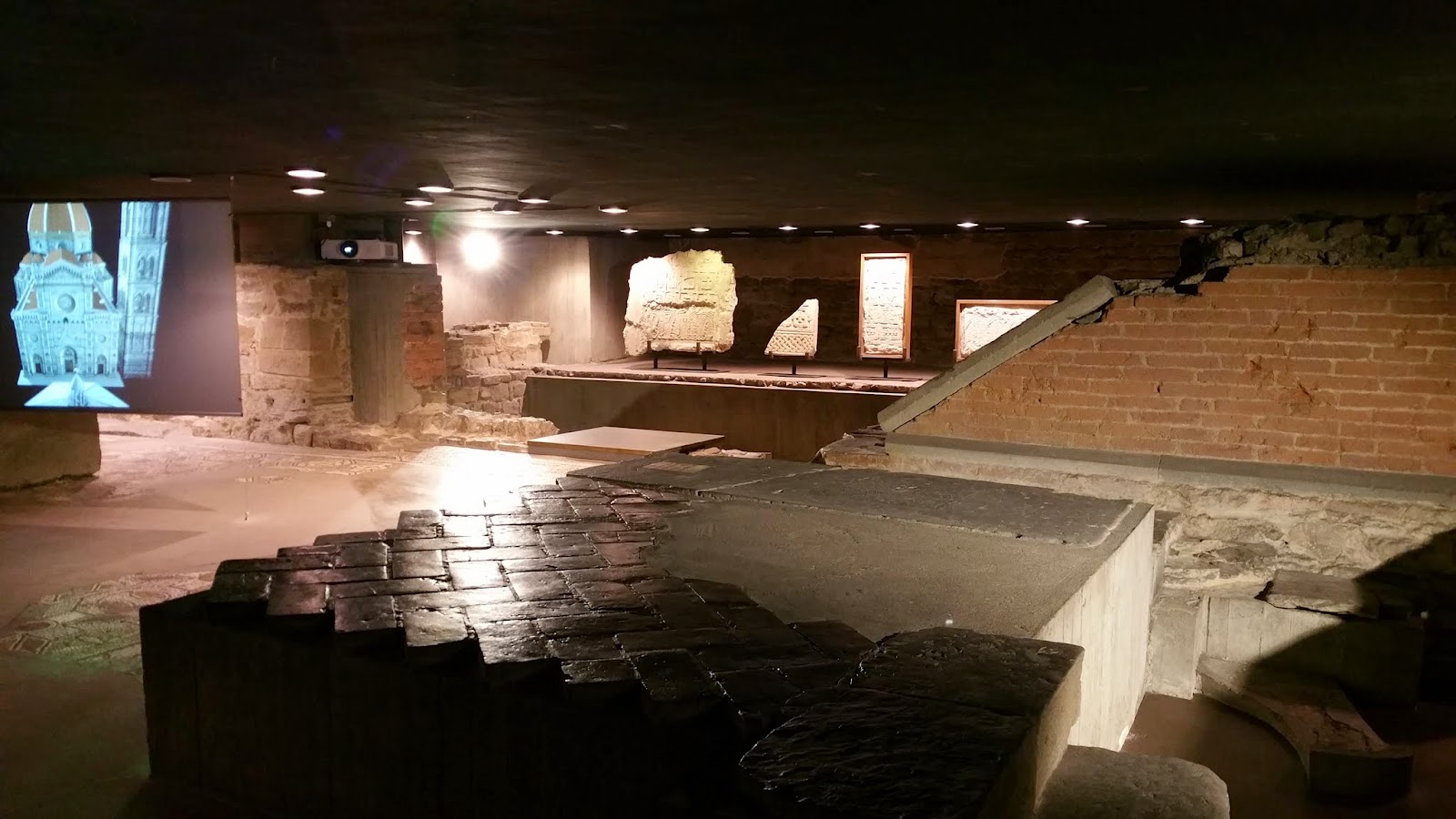 This is the original church that was built in the 4th century over roman houses.  It was much smaller than the current church.  In 1412 they leveled the old church and built the new one.  In 1965 to 1974 they did a series of excavations to open us this area and it has been a museum for many years now; but one we'd not seen.  He spent an hour and then picked me up and we headed south to the Bargello Museum where I again enjoyed my book in the bookstore while he used the cell phone camera and had a ball in this much expanded museum from what he remembered.  It is almost entirely sculptures. 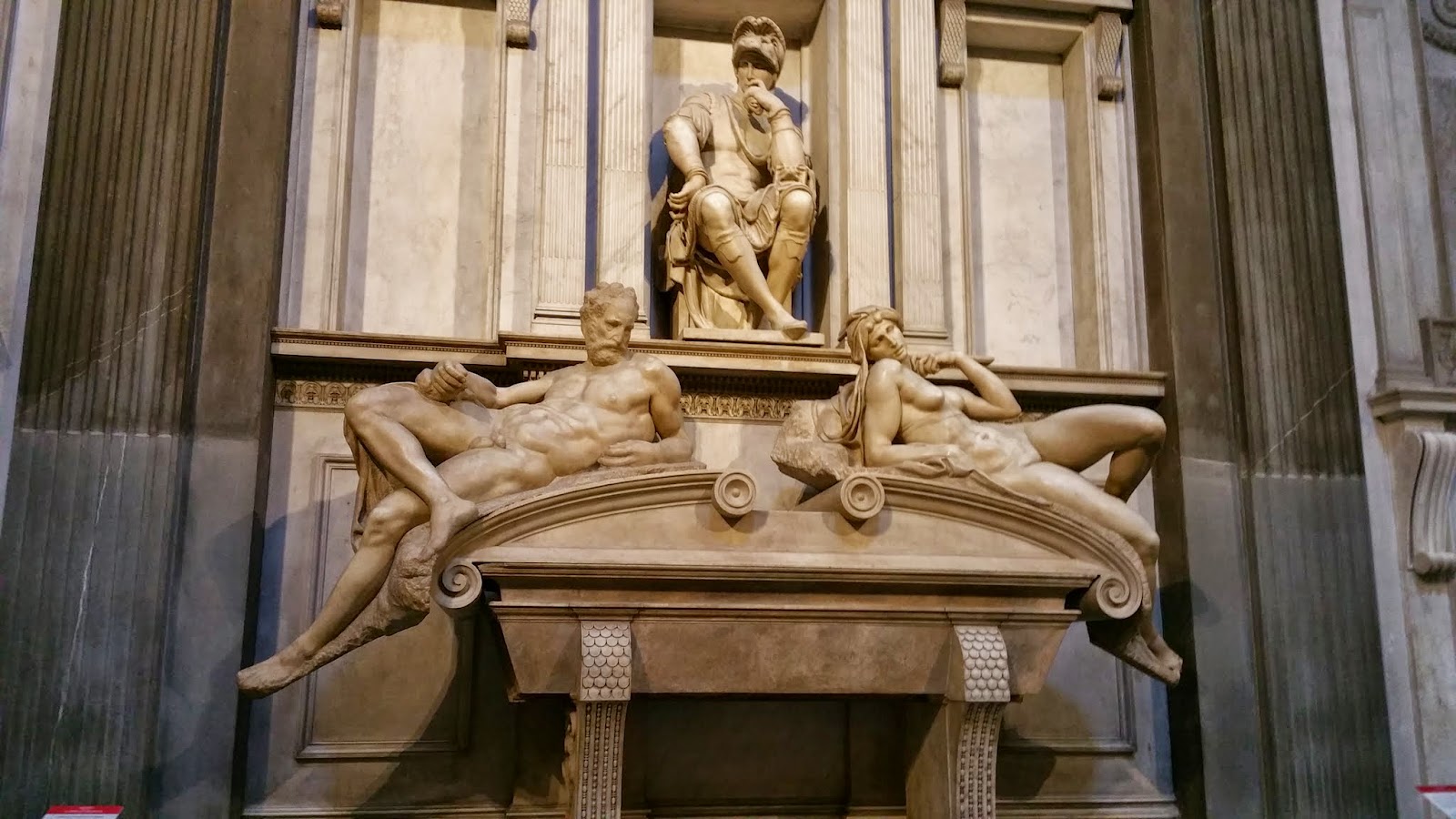 Another hour and we were back on the street walking back north pass the Duomo to the Baslicia di S. Lorenzo where all of the famous Medici family is buried in the Cappelle Medicee.  There is a special chapel within the larger one that was designed by Michelangelo when he was at his greatest.

Soon we were back on the street where we walked north to San Marco Piazzza; but the museum there closed early today.  So we went to Plan B and hopped aboard Bus # 23 to see where it would take us.  We rode the bus for nearly two hours and went from the center to the northwest corner of Florence and then back across town to the far southeast side of the city.   We'd passed our bus stop for the apartment during the last portion of the ride and when we again reached that point, Jim got off and went home while I continued on to the grocery store to pick up our meat for tonight's dinner.  I walked home and was in the door by four o'clock.  A fun day!   But, not over. 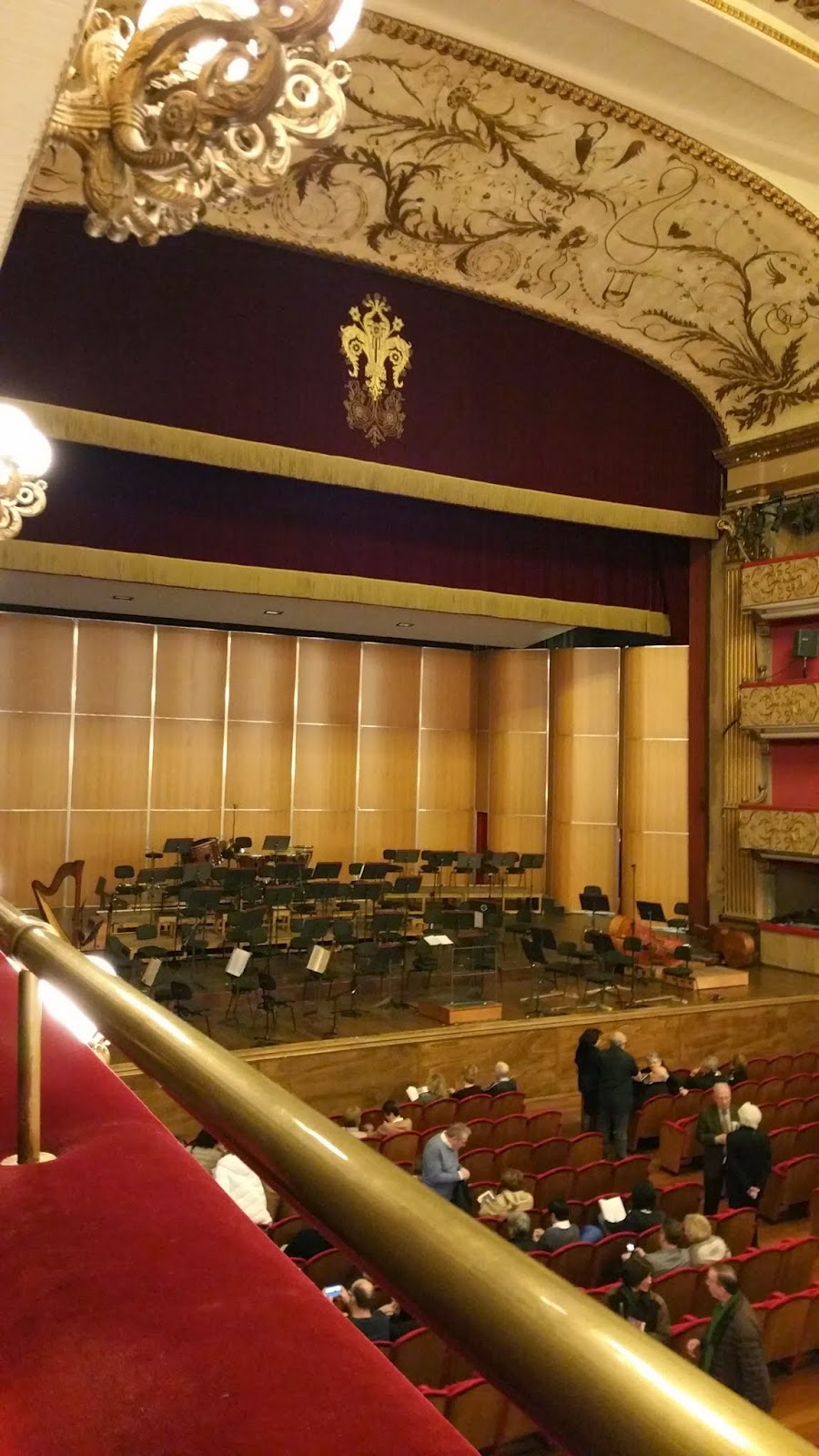 We enjoyed a wonderful dinner with the window open to the beautiful spring day.  About 8:15 pm we dressed warmly and started the twenty minute walk to the theater.  We'd purchased tickets last week for a concert in the very old Opera House called Teatro Verdi.  The walls of this opera house has heard all of the famous singers and musicians over the centuries.   It is located just a couple of blocks past the Santa Croce Church.  As we passed the church we stopped to check out what was happening tomorrow as there were many tents set up in the piazza.  Discovered that there is a Half Marathon that starts and finishes in the piazza tomorrow.  We also noticed many people in the various restaurants that line the streets.  Most were full and flowing out into the tables on the sidewalks.

Arrived at the Teatro Verdi about fifteen minutes before the start of the program.  The halls were full of people enjoying their evening; many at the bar inside of the theater.  We had balcony seats about half way down the side, room number 20, on the second level.  Very good seats on little red chairs; there was room for two more people but we had it all to ourselves.  The concert was classical music performed by the Toscana Orchestra, directed by Daniel Rustioni; a 32 year old man who was awarded the designation as the Best Newcomer at the International Opera Awards in 2013.   The second selection was with a french horn solist by the name of Andrea Albori.  After the intermission, our third performance was all four movements of a beautiful and haunting piece by Robert Schumann.

By eleven o'clock we'd made our way down the very busy Friday night crowds in the streets and arrived home.  It's Saturday morning now as I sit in bed and finished this very long journal of a wonderful day in Florence.   I hope you enjoyed our day as much as we did.   We set a record today of just over eight miles on the pedometer.