Walking the Oltrarno Neighborhood of Florence

Our morning started with no wifi connection; Lorenzo, the landlord, was very helpful and kept working on solving the problem until we again had service.  Amazing how attached we are to the Internet; whatever happened to the times when we traveled and said to the family back home:  "no news is good news"....we'll only contact you if there is a problem. Our first jaunt this morning was over to the big supermarket for food supplies for the next three days as this is a holiday weekend, including Monday, and one never knows for sure what will be open.  Along the way we stopped at the the Opera House known as "Teatro Verdi", one of the oldest opera houses in Italy.   There we purchased tickets for a performance of three symphonies on next Friday evening.  Then on to the grocery store where for less money than our dinner out last night; we purchased food and drinks for the next three days.  Chez Jansen is a good restaurant we've found!

We carry two small backpacks and a shopping bag when we go to the store to bring everything home.  Spent a short time on the wifi that was now working and then about two o'clock we were out the door again.

We walked along the river to the Ponte Vecchio where we started to follow the Rick Steve's Tour Book guide for a walk through the Oltrarno Neighborhood south of the Arno River.  It was an opportunity to get a sense of rustic, old Florence.   Heading west from the bridge we stayed along the river at first, 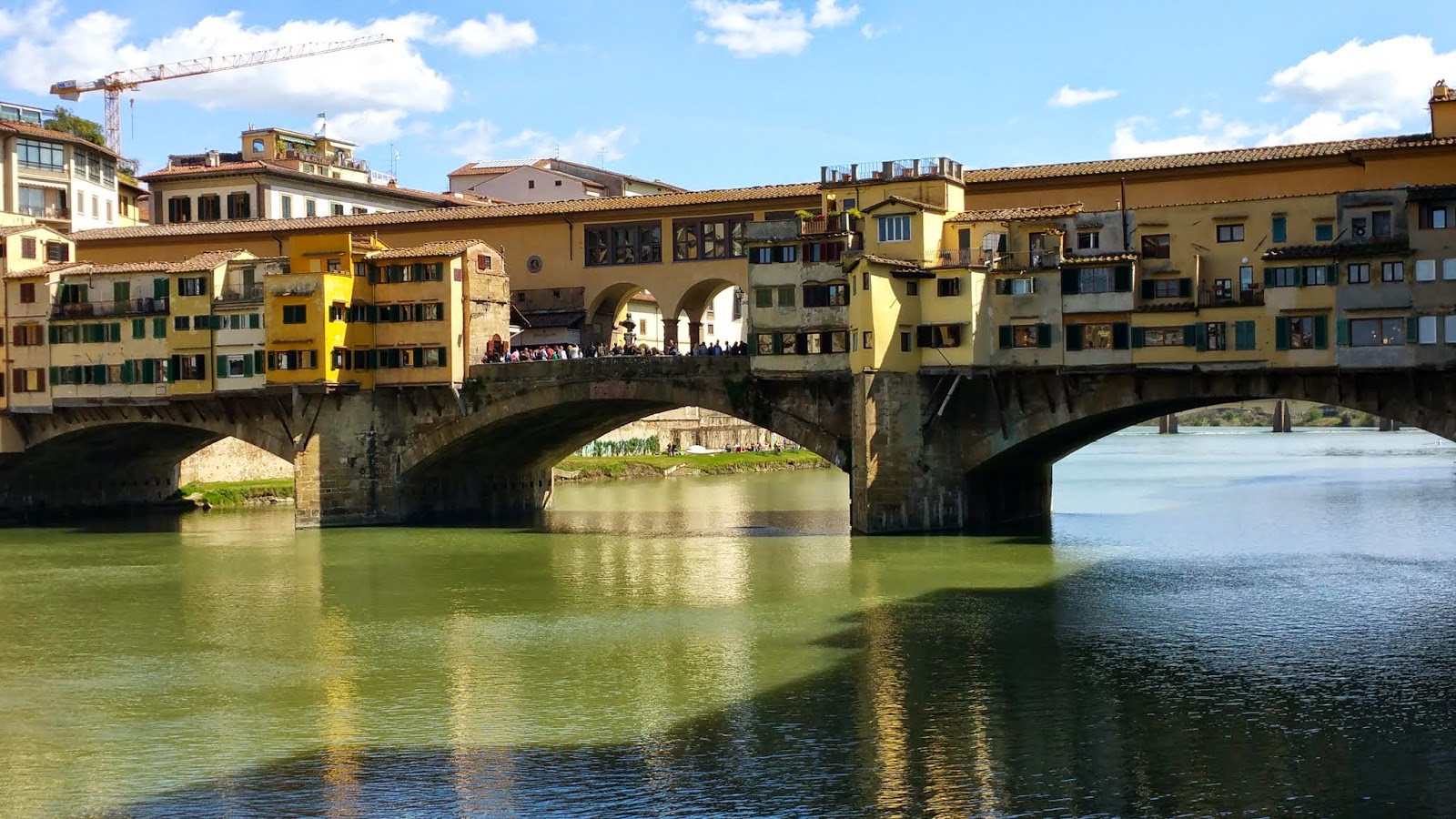 finding several very old towers and best of all a wonderful view of the Ponte Vecchio from the other side. There is a wonderful balcony that is open to the public right next to a four star hotel known as the Hotel Lungarno.  This will give you a different view of the bridge.

We then headed away from the river in to the neighborhood, pausing to peek into small shops; some were closed and others were open.  One shop owner invited Jim in and told how his grandfather had begun the business in 1947. 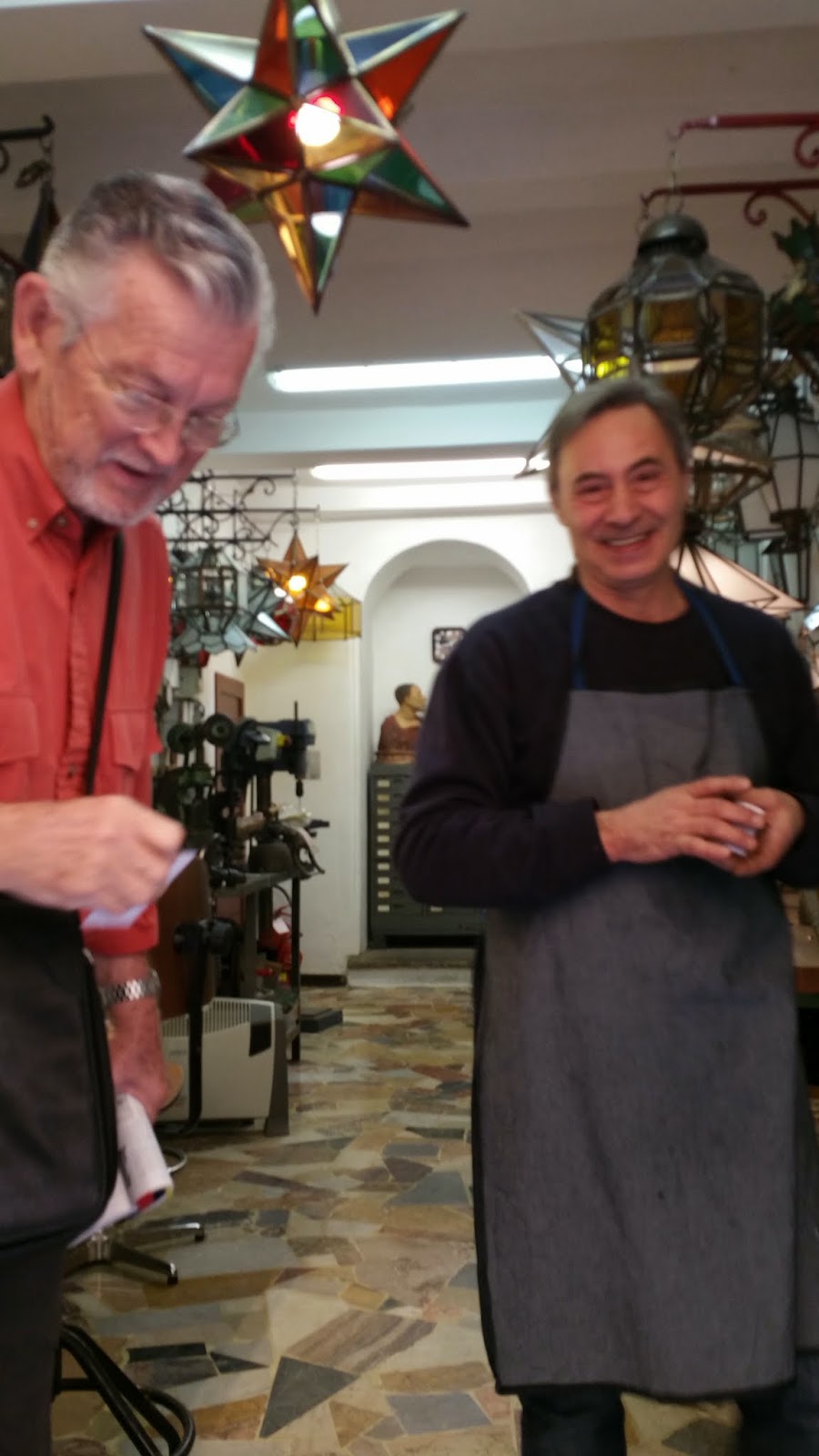 He makes glass light fixtures by hand, many of them shaped as stars.  He apologized for his lack of English skills!  Continuing on we found the bust of an old woman up high on the corner of building holding her nose....the corner has a collection of garbage bins there and I'd say that where they've been for many years.

On into the Plazza Santo Spirito after a fast look up the street at the Pitti Palace (save that for another day).  Their Friday Market was just closing and there were many people still enjoying lunch at the many different restaurants that spill out into the streets in cordoned off seating areas.  Following Rick's advice we found the Ricchi Cafe and went inside to look an the many different renderings by artists of what they thought the very plain church could look like to improve the piazza.

Our next stop was in the Piazza dei Carmine where there is a very plain looking church with the very beautiful and famous Brancacci Chapel attached to it.  The paintings inside of the chapel were done by several artists but the one who completed the chapel and pulled the art together was Massaccio. 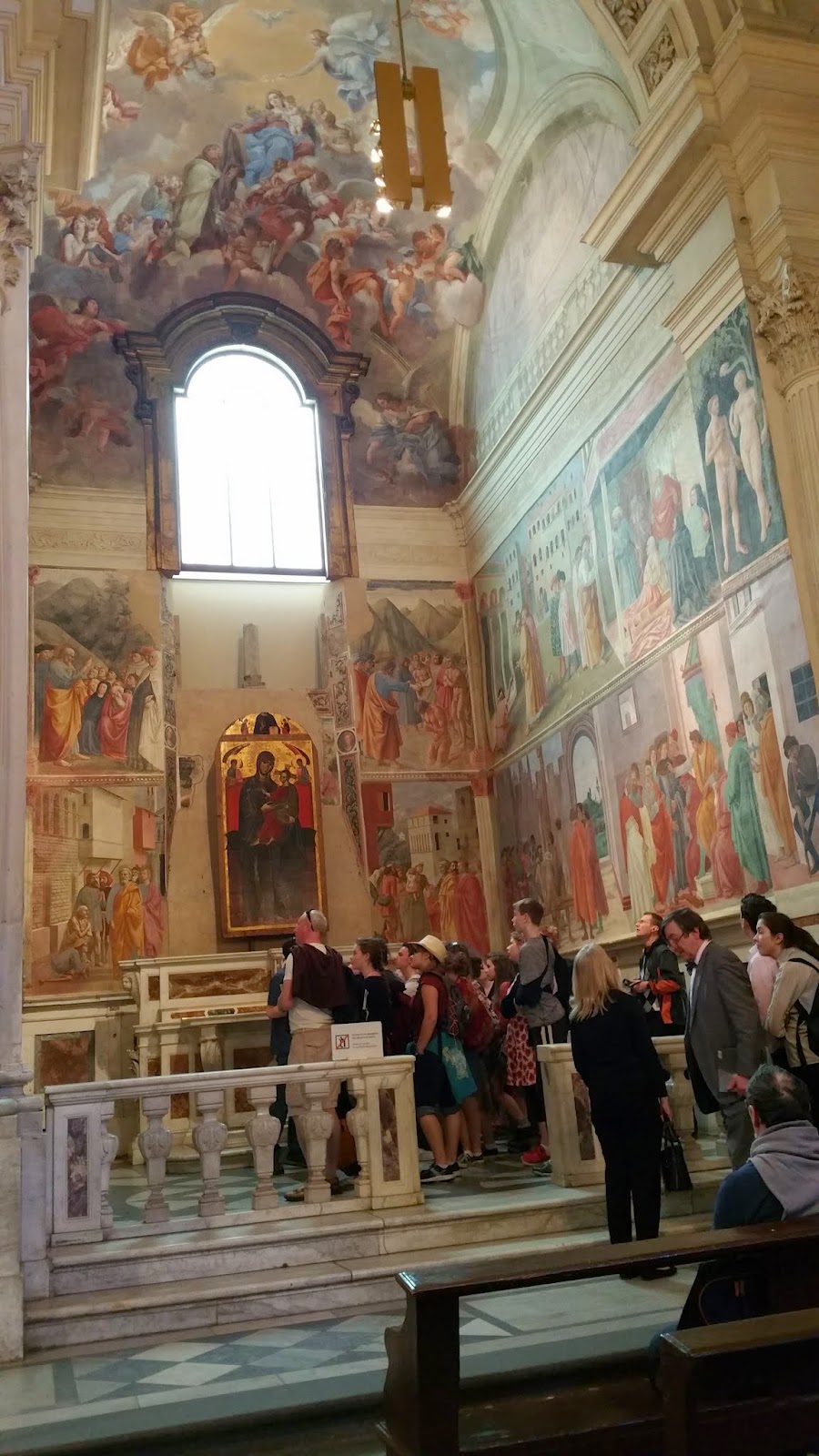 The chapel has frescoes that tell the story of Peter, half are by Massacio and the others by either Masolino or Filippino Lippi.  Completed in the fifteenth century the techniques he used were copied by many Renaissance artists and helped shape Renaissance men and women's own self-images.  There was also a wonderful film explaining the chapel and in that room there was a large painting across one wall of the Last Supper.   I've heard of the Brancacci Chapel for years and wanted to see it on previous trips so this was very special for me.

Back on the tour we followed Rick's directions and headed over to see the Porta San Frediano; a door into old Florence from the west.  Created in 1333, it is one of several gates in the medieval wall which still stretches from this gate to the Arno River.  Massive wooden forty foot doors still hang in the opening.   Back towards the east we continued the tour until we reached one bridge that had an ice cream shop (Gelleto) with twenty some people standing in line to get one of their cones!  We enjoyed the view from the bridge and then continued up the road to the next bridge that is the last one on the west side before the Ponte Vecchio.

Staying on the north side of the bridge we commenced walking east towards Santa Croce Church for a visit for Good Friday, it was nearly four o'clock and the tabernacles are open and empty from now until Easter Sunday.  Along the way we accidently found the market that has the brass boar that you rub for good luck and to ensure that you'll come back to Florence again.  A quick rub, dropped a coin and then walked quickly through the market before continuing our walk. 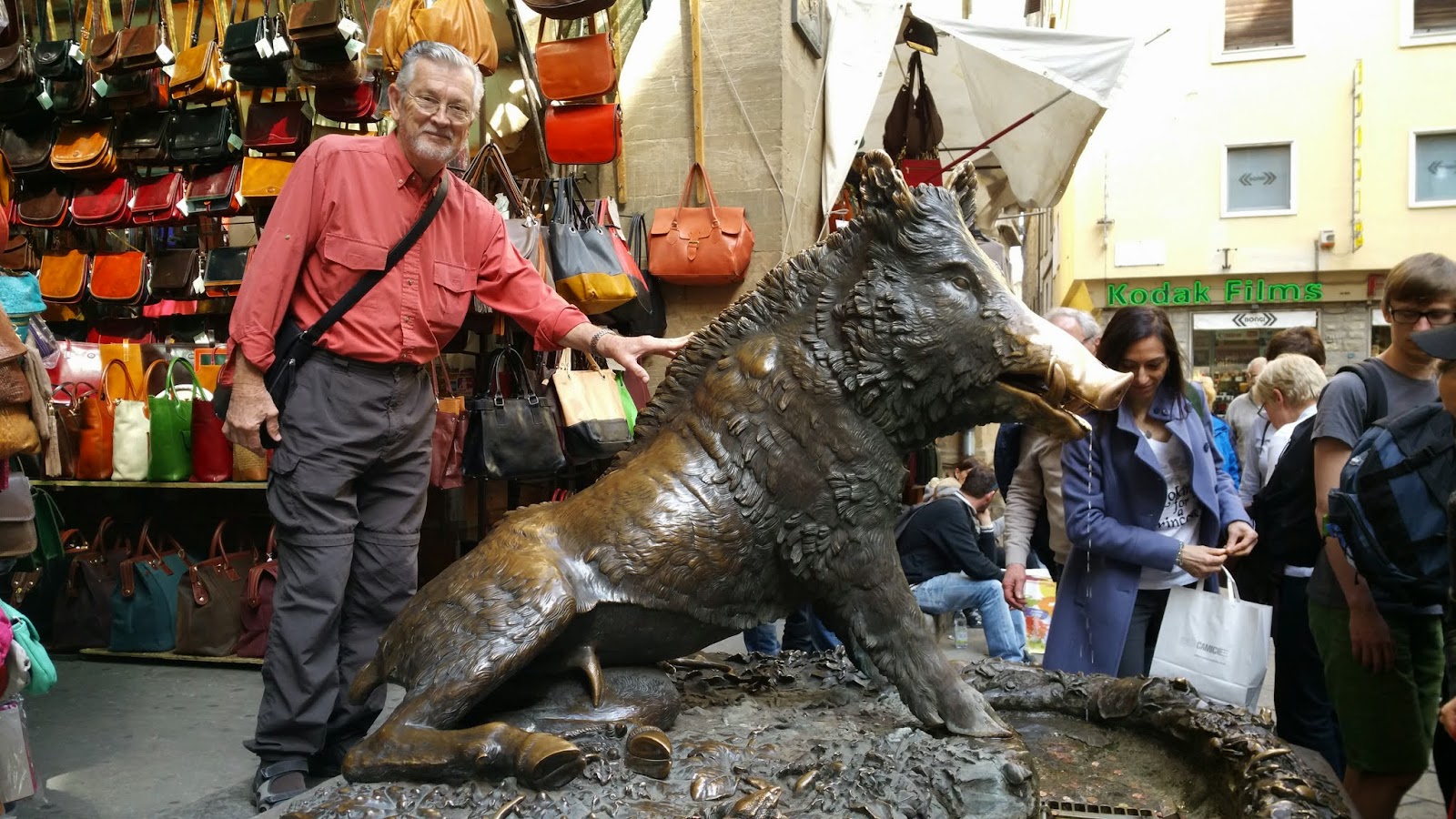 From Santa Croce it was a short walk home.  Wifi time and then soon Jim cooked our fish dinner that we'd purchased at the market.  Salad, breaded fish and paella (pre-made from the store that we just heated up) along with a bottle of wine.  It was nearly seven o'clock as we finished and we decided to walk up to Michelangelo Overlook to see the sunset.  Off we went leaving the dishes in the sink...short trip up... it's right behind but a ways up...for great views.  The place was packed with people there for the same reason but the sun was hiding behind the clouds so the sunset views were not so good. 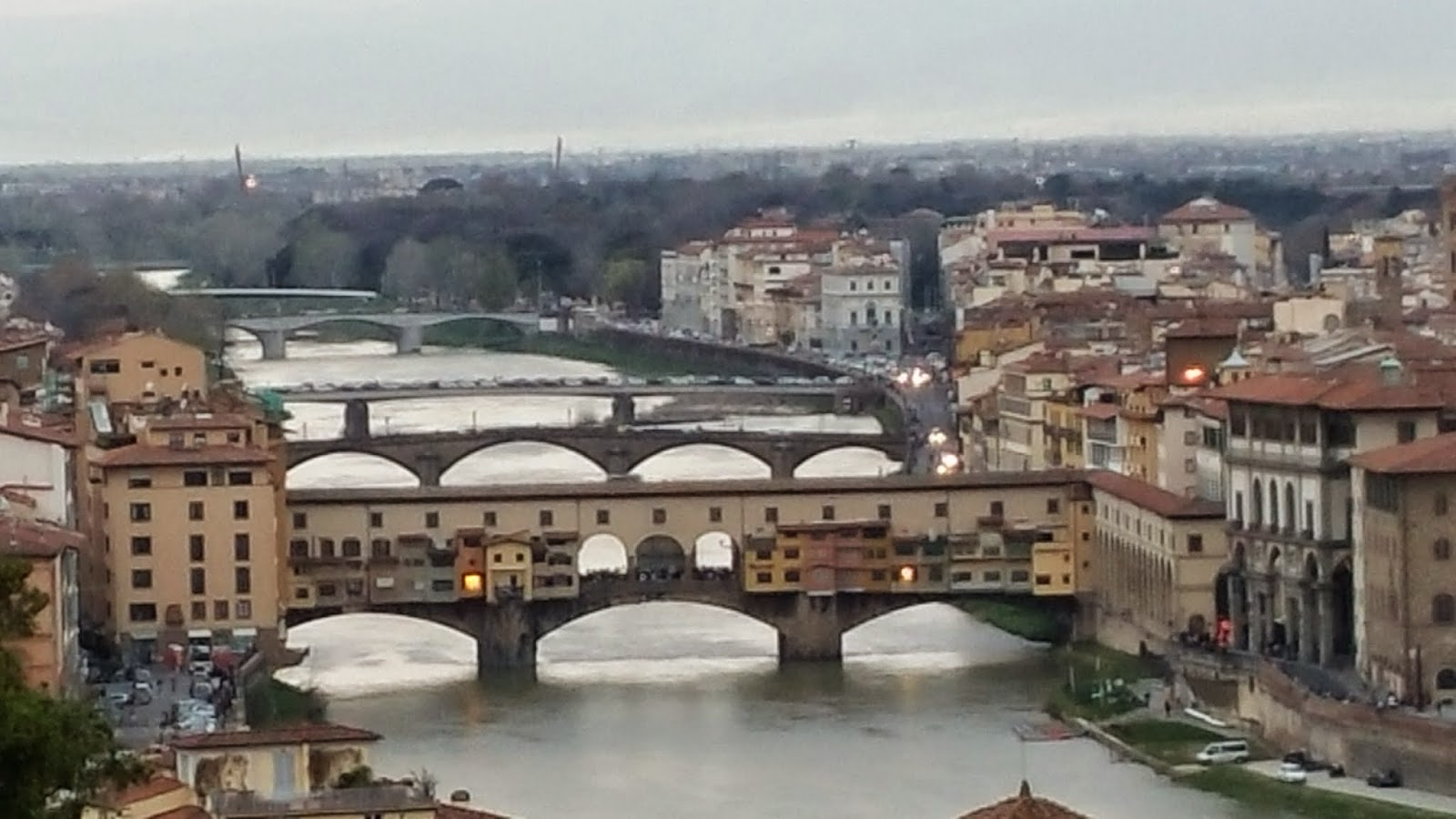 Decided to wait for the lights to come on; by nearly eight o'clock we only had a couple and it was getting cold and still not dark.  We will have to go up again next week, dress warmer and go later.

Soon we were home and in checking our milage we set a new record for walking; today we hit 8.29 miles.   It's getting late and time for closing this very long journal.  Thanks for sharing our adventure with us...

Good to talk with you tonight. good job on your blog. Will try to publish this Hugs. Mary

I enjoy all of your photographs, but the street scenes in this chapter remind me so much of what I remember about Florence from my first two visits, as a high school student in 1963 and as a college student in 1968. Thank you for sharing your days with us, your faithful readers!
Happy Easter, Leslie