Easter Monday is a Holiday in Italy

I hope you take the time to see the separate blog that I posted just before this one that has the links to the two videos that I took yesterday at the Duomo of the fireworks.   The first one is so that you can see how beautiful the cart was before they destroyed it, less than two minutes.    The second video is of the fireworks and is about five minutes; but fun to watch!

We woke today to clear skies but still cold weather.  The wind was not as bad but there was a definite bit to the air!   The first job was to upload the second video to YouTube and then I changed the bed and bathroom linens.  The owner had left us a second set and he will pick the used ones up tomorrow.  Hard to believe we'll be heading to England in another week. 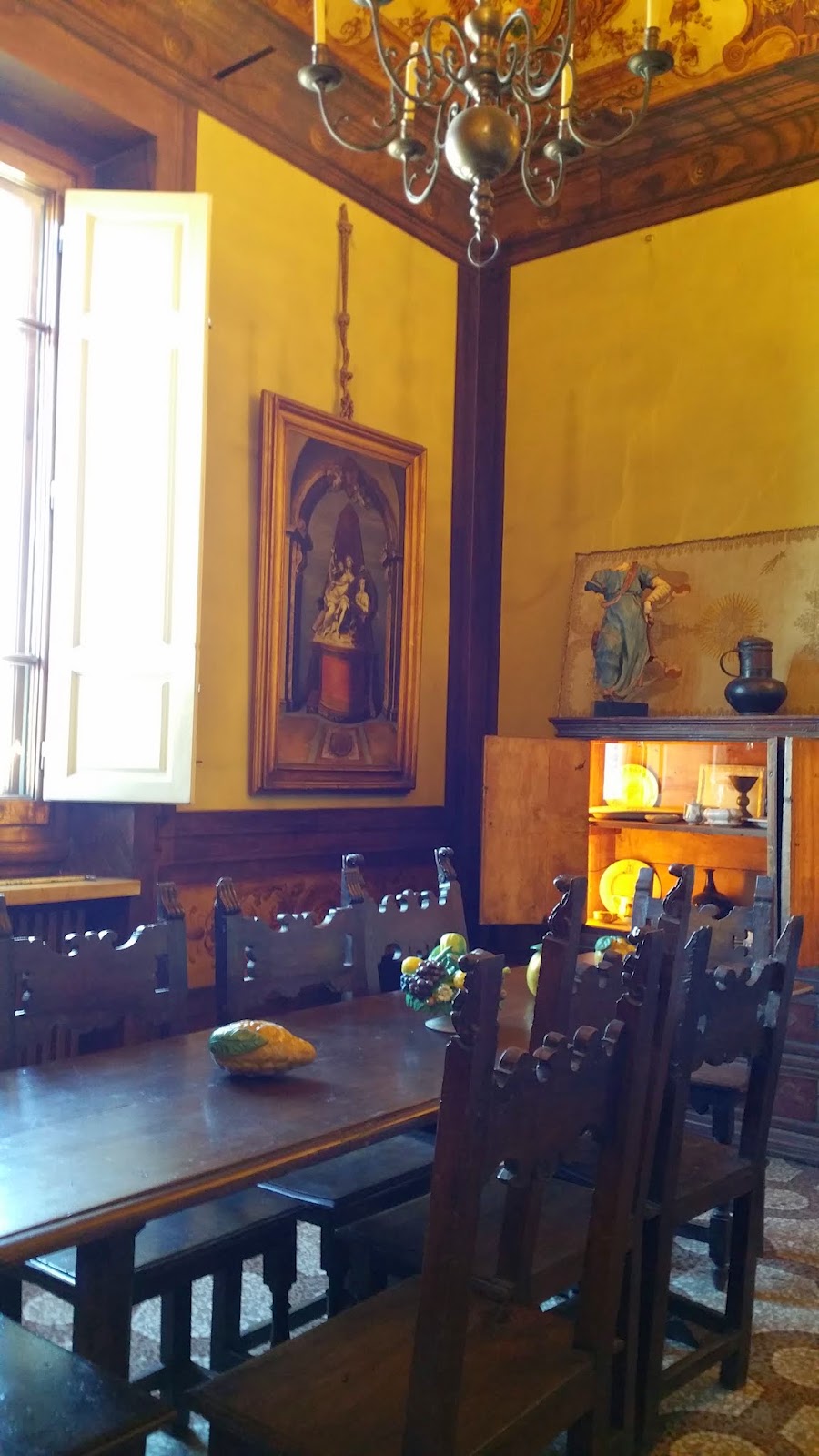 We left about ten o'clock to walk around the corner to a free museum (donations only) that sounded very interesting.  Casa Rodolfo Siviero was the personal residence of Rodolfo Siviero who acquired it from the original owner who was the Jewish curator of the art collection in the Pitti Palace until the Nazi came during WW II.  Before leaving he gave the house and the artwork to his friend and protege Rodolfo.  He worked with the Nazis but kept detailed records of everything they took and where it was sent; later working with the Monument Men (about whom the recent movie was made) assisted in recovering many of the Italian works of art for Florence.  His work continues today by other people.   I enjoyed the aspects of seeing the art in an actual home instead of walls in a museum.

Two days ago we'd purchased bus tickets and today we used them for the first time.  They should be good for several more trips around town if we fully understand how they work.  We just missed the bus as we came out of the museum and had to stand in the cold wind for at least fifteen minutes for the next bus # 23.  That took us across the old city to Piazza San Marco where we waited almost half an hour for bus # 7. 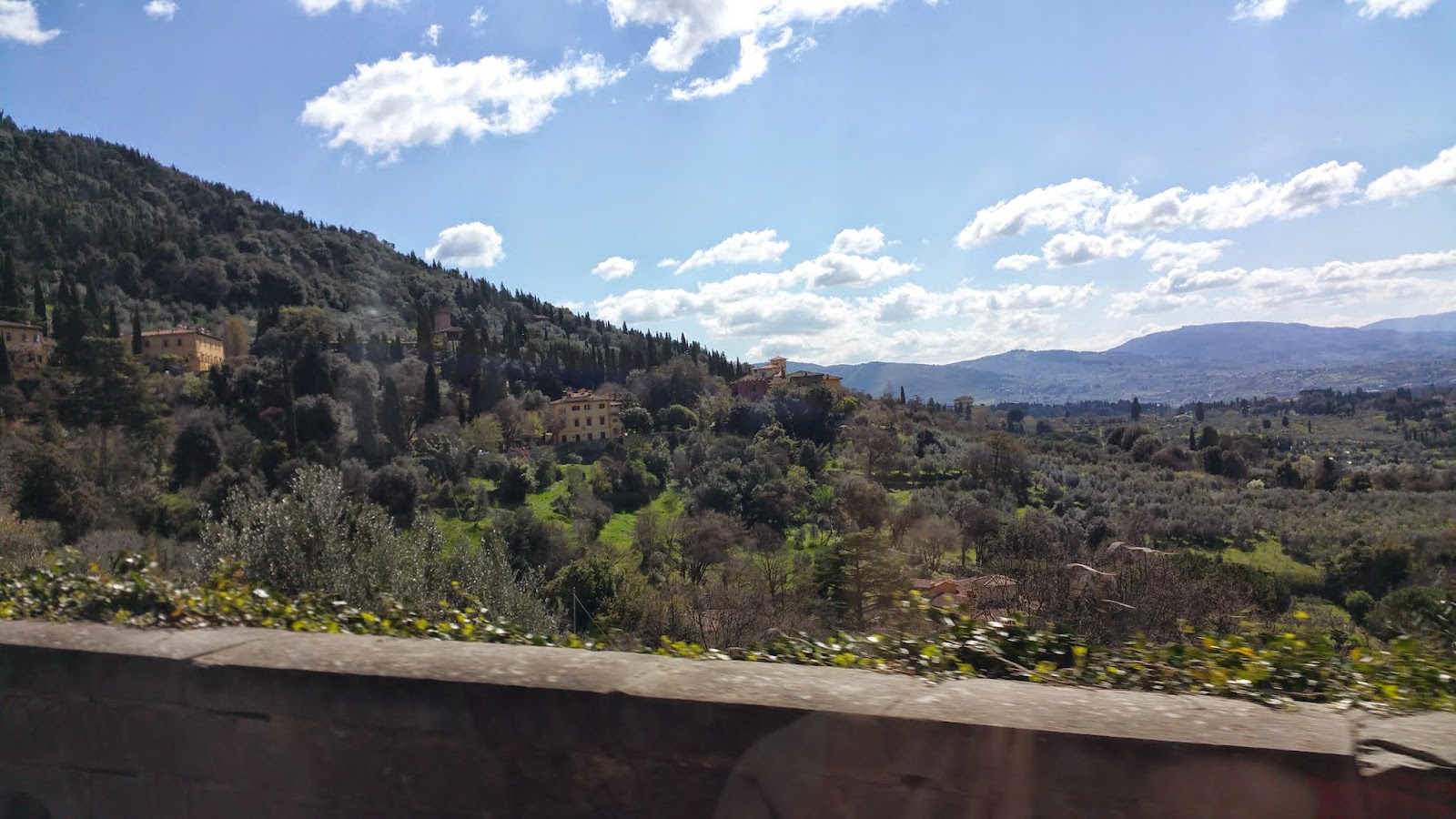 We were lucky and each got a seat on this one that took us all the way to Fiesole; about a half hour outside of town in the hills above Florence.  Years ago we stayed in a Pension by the name of Pensione Bencista in Fiesole that sits on the edge of the hill and has a patio that has a view of the Duomo and other large buildings in the old city of Florence.  If you ever have an opportunity to stay here...it's wonderful and very old.  Our daughter-in-law stayed here with her parents as a child, she's full Italian and they visited Italy regularly. 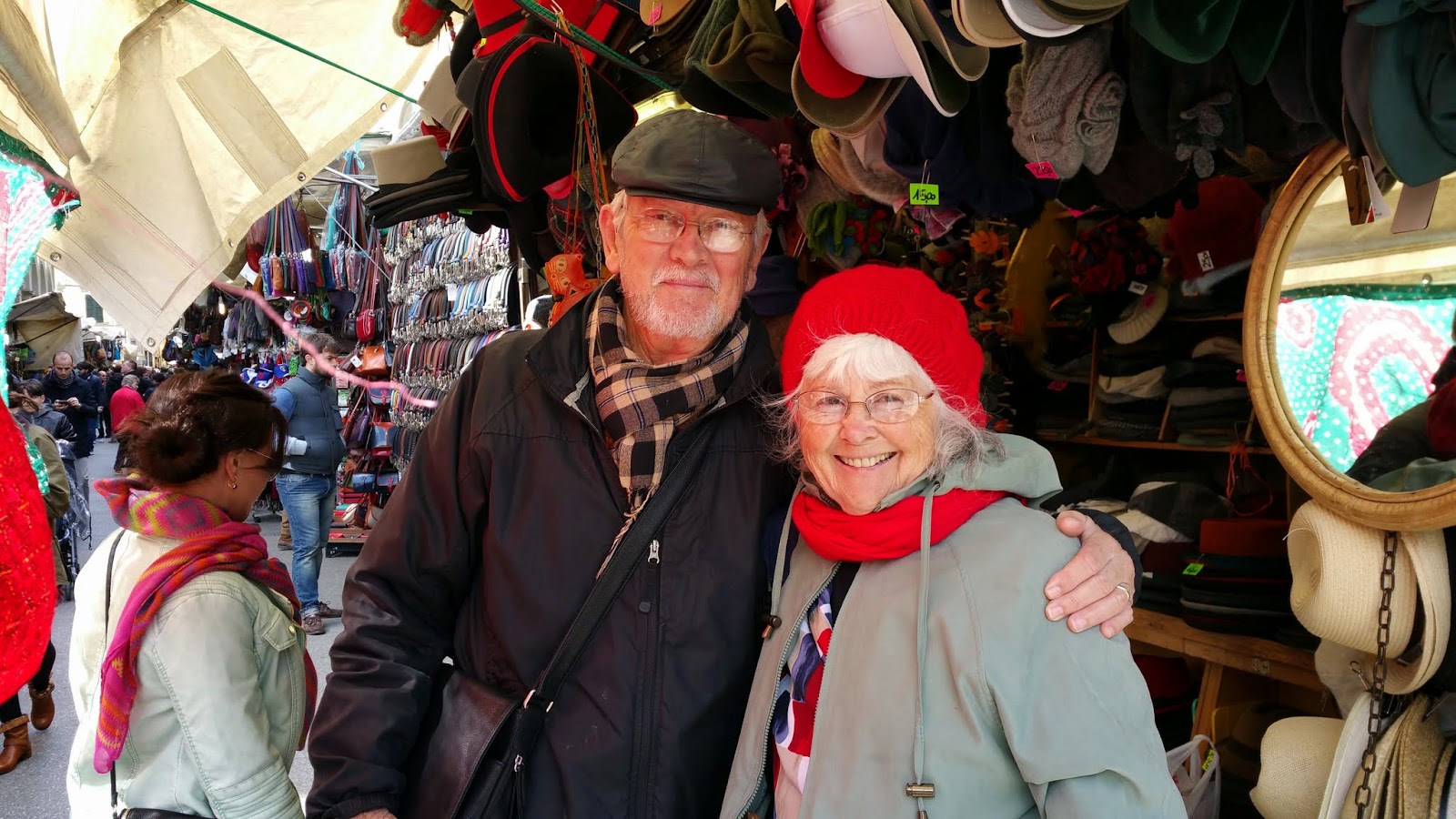 We stayed on the bus when it arrived as we've seen it all before and it was more the ride than anything that we were enjoying this morning.  Back in the city we departed the bus at Piazza San Marco and walked from there to the huge street market at San Lorenzo; intent on replacing Jim's wax cap that sailed into the Arno River last night with the help of the wind as we crossed the bridge.   We not only found his cap but I also replaced my hat that I lost in Rome on our first night at the Spanish Steps.  It was old and loose and slipped from my head without letting me know it was leaving.  Only later in the Metro while looking at my reflection in the window did I realize my hat was gone.  It had traveled a good many trips with us over the years.  So now we are both equipped with hats for our trip to England next week. 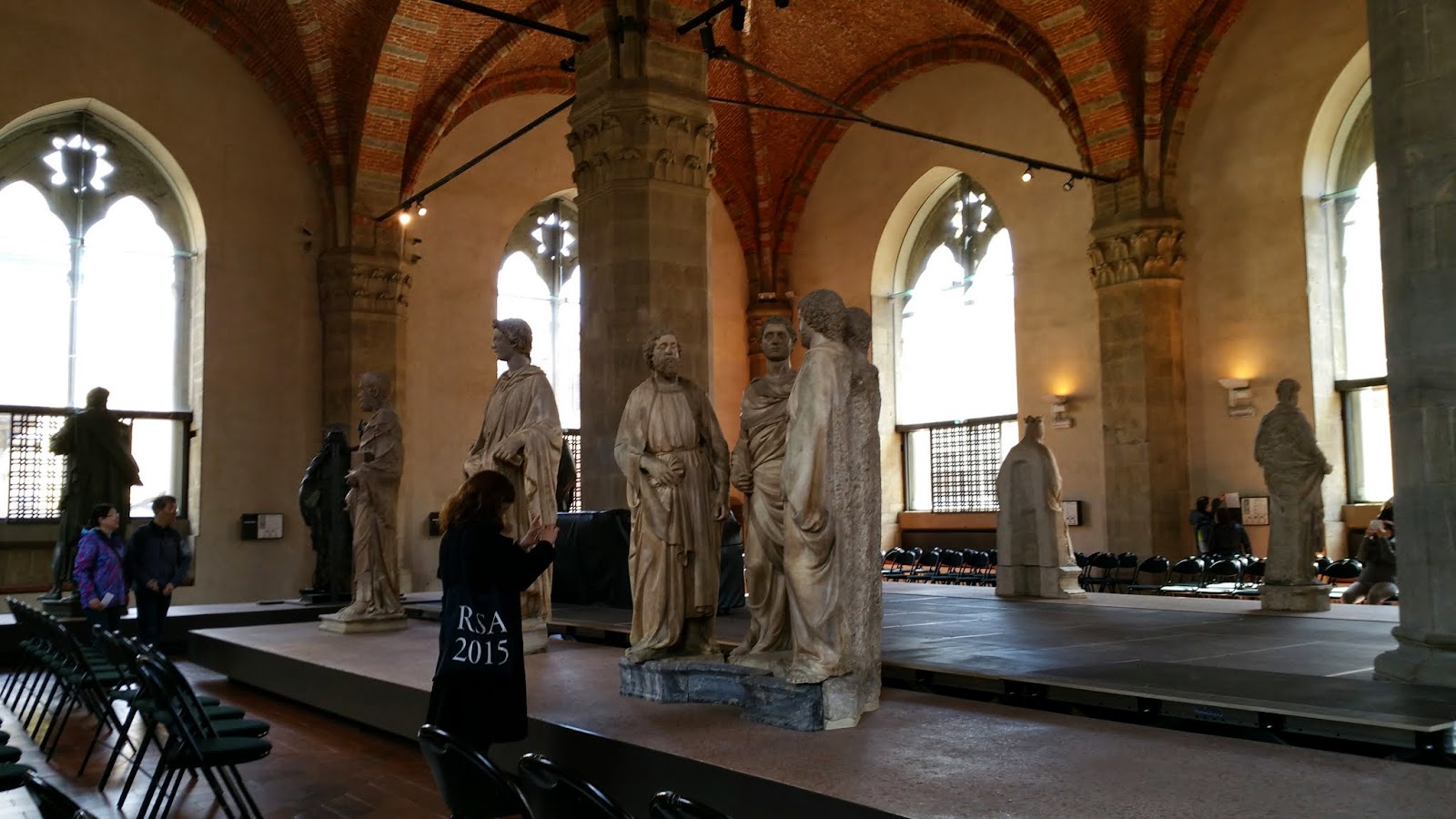 Stopped for a bite to eat and then continued walking to Museo Orsanmichele, free on Mondays which was nice but we gave a generous donation as we loved the statues and the views we found there.  This was formerly a  building used as a grain market with the grain stored upstairs.  Later it was enclosed and the first floor became a church.  The second floor is a wonderful museum with the statues that originally stood in the niches around the outside of the building (there are copies there now) beautifully displayed in the massive room.  The flight of stairs to the first floor museum was ninety two steps 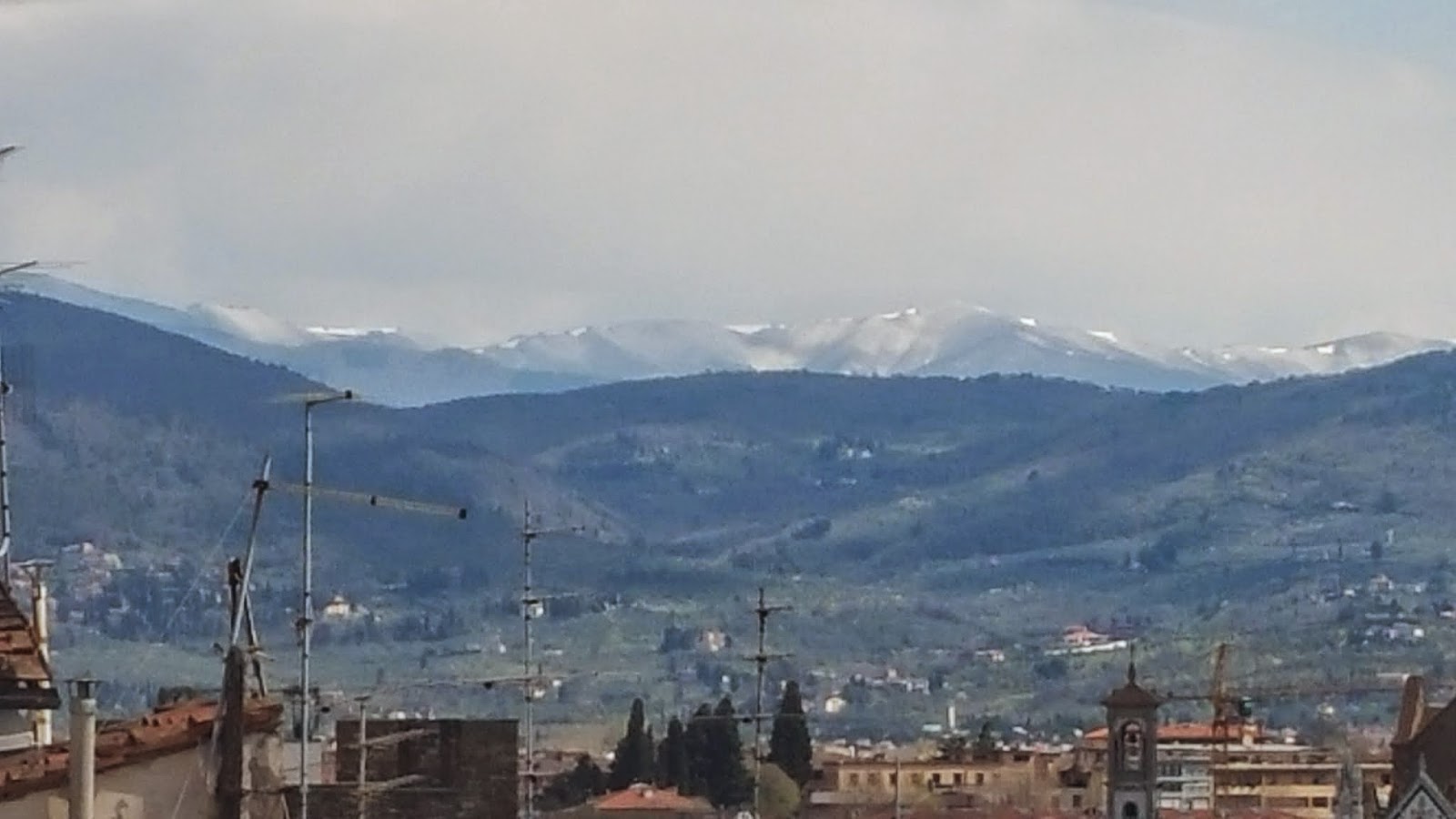 and then we climbed another seventy steps to the second floor (their first floor is the ground floor...so it was actually three and each level was two stories high. )   But on the second floor we had windows with views of Florence, the hills beyond and in the distance the mountains with snow on them.  Well worth the effort to get up to the top.

From there we walked to the River and home, arriving about three o'clock.   Another marvelous day of adventure.  The pedometer said we'd walked 3.78 miles. 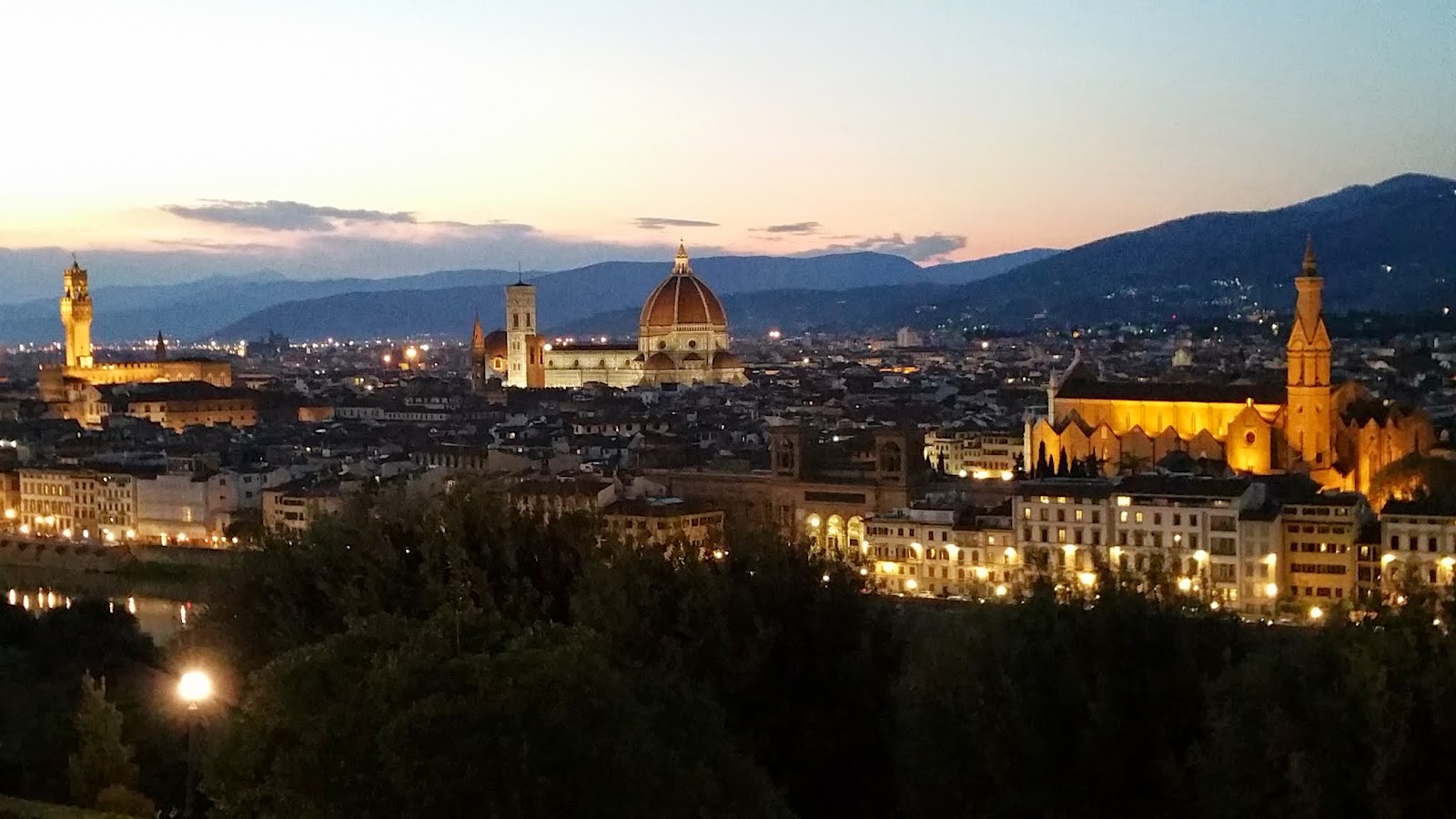 Hope you've enjoyed our adventure.  We're talking about walking up to Michelangelo's Overlook tonight after dark to see what photos we can get of the night lights.  I wore five layers today...I may have to add another one tonight and definitely long johns under my jeans!  (post script:  yes...we walked up the hill!)  Ciao

You've got some wonderful photographs here, Martha. I particularly enjoyed photo #70, with a beautiful face reflected in the shot from the bus window, overlooking the valley. The light in the sunset and dark photographs is also stunning. Actually, I enjoyed studying every one of these photographs. What a day! Thank you.