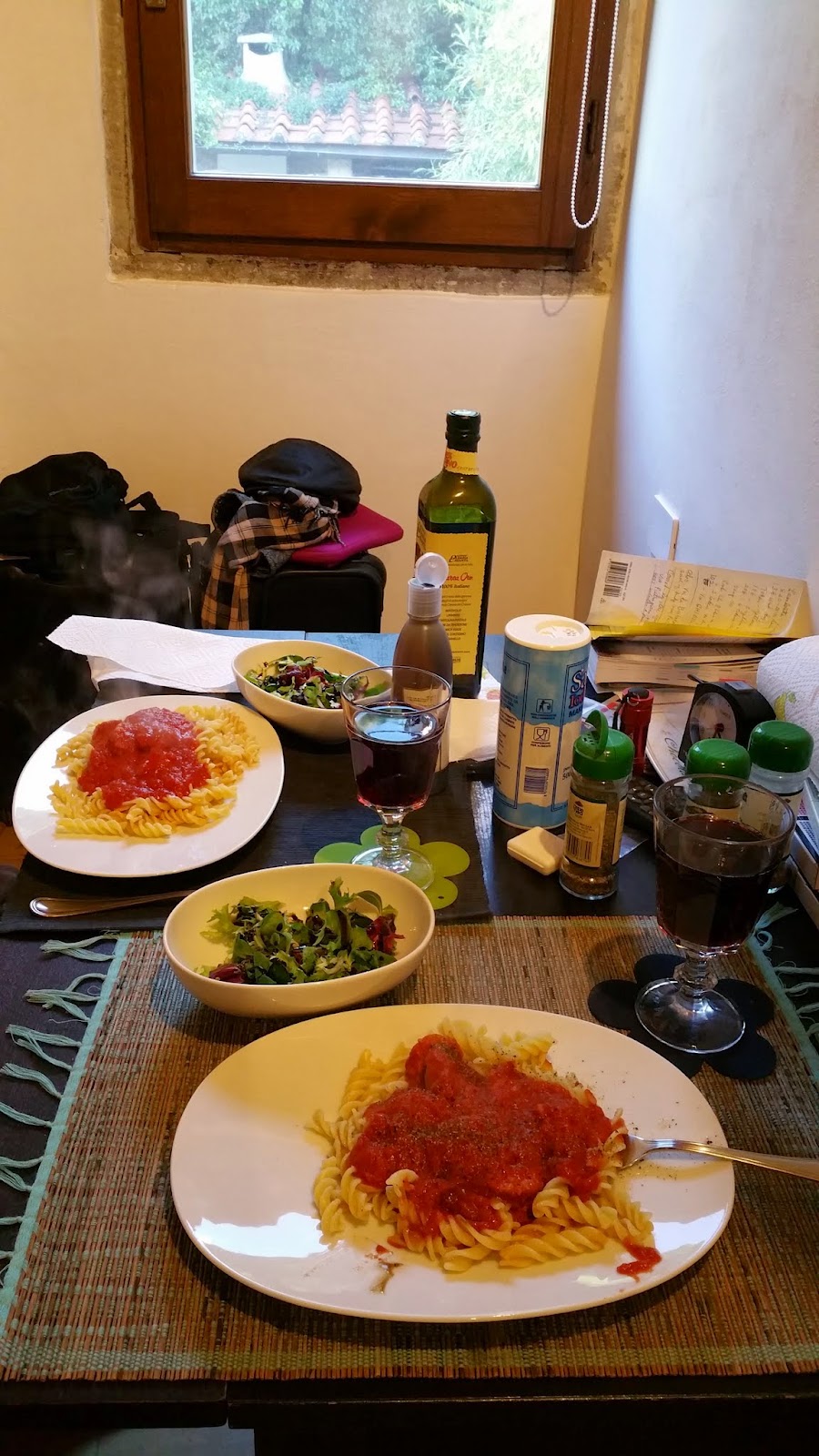 My story begins with the wonderful dinner that Mr. Jim prepared for us last night; we've so enjoyed cooking our meals in our apartment.  Every other day we visit the store for supplies for two days of meals and then carry them home using our small day bags along with a cloth shopping bag that we brought with us from home.  One of Jim's treasures from Bower's Museum.

This morning after breakfast we were out the door by 9:30 am and on our way over the bridge; stopping along the way for the daily photo of Ponte Vecchio.  The Museo Horne is only a few blocks past the bridge and we arrived just as they were opening their doors.  No photos allowed so the few that I have were on the sly.  Hebert Percy Horne, an English architect and art historian, acquired the historic Corsi building on Via dei Benci in 1911.    He used his collection of paintings, sculptures, drawings and decorations to recreate the atmosphere and setting of an authentic Renaissance home.  Today visitors are presented with a refined treasure of masterpieces but above all else it is a home, decorated with original works dating from the thirteenth to seventeenth centuries, in the heart of Florence, a symbol of the culture of the Renaissance. 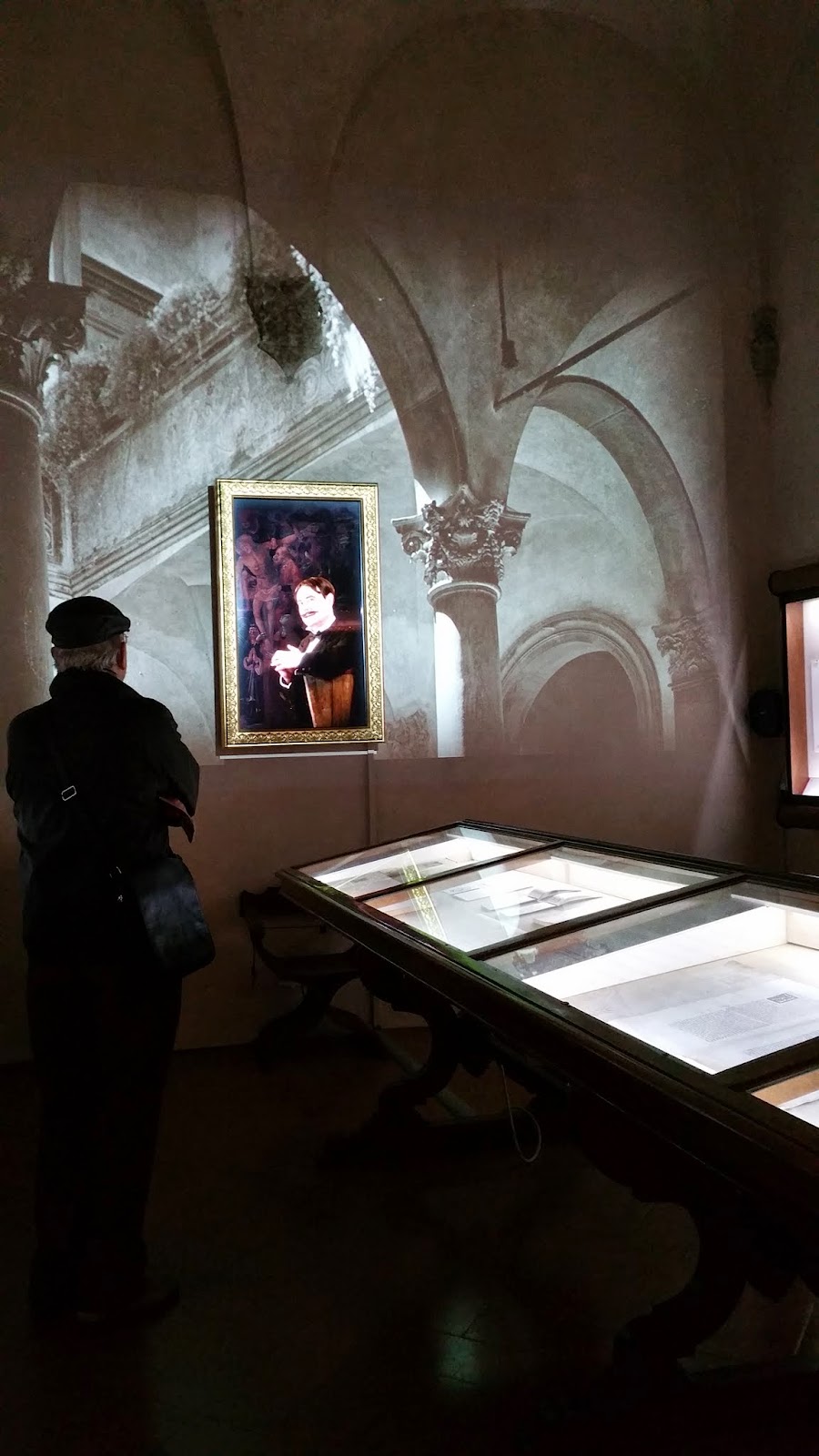 While we were touring the building there was a group of Italian high school students with a docent from the museum conducting their tour in English.  Teaching them some English language skills.   She is an American; but as the guard whispered to us the boys and girls did not know that she also speaks Italian.  They were not aware that she could understand all of their comments.

One of the highlights of the tour was a video that interacted with a film on the wall; very advanced technology and fascinating to watch as the actor was made to look like Hebert Horne as he told his story of his career and friendships with other famous people that influenced him during his lifetime.

Leaving the museum we walked back towards the Arno River all the way to the Ponte Vecchio where we crossed the bridge and made a sharp right turn into the Oltrarno Neighborhood that we'd visited last week in the afternoon. 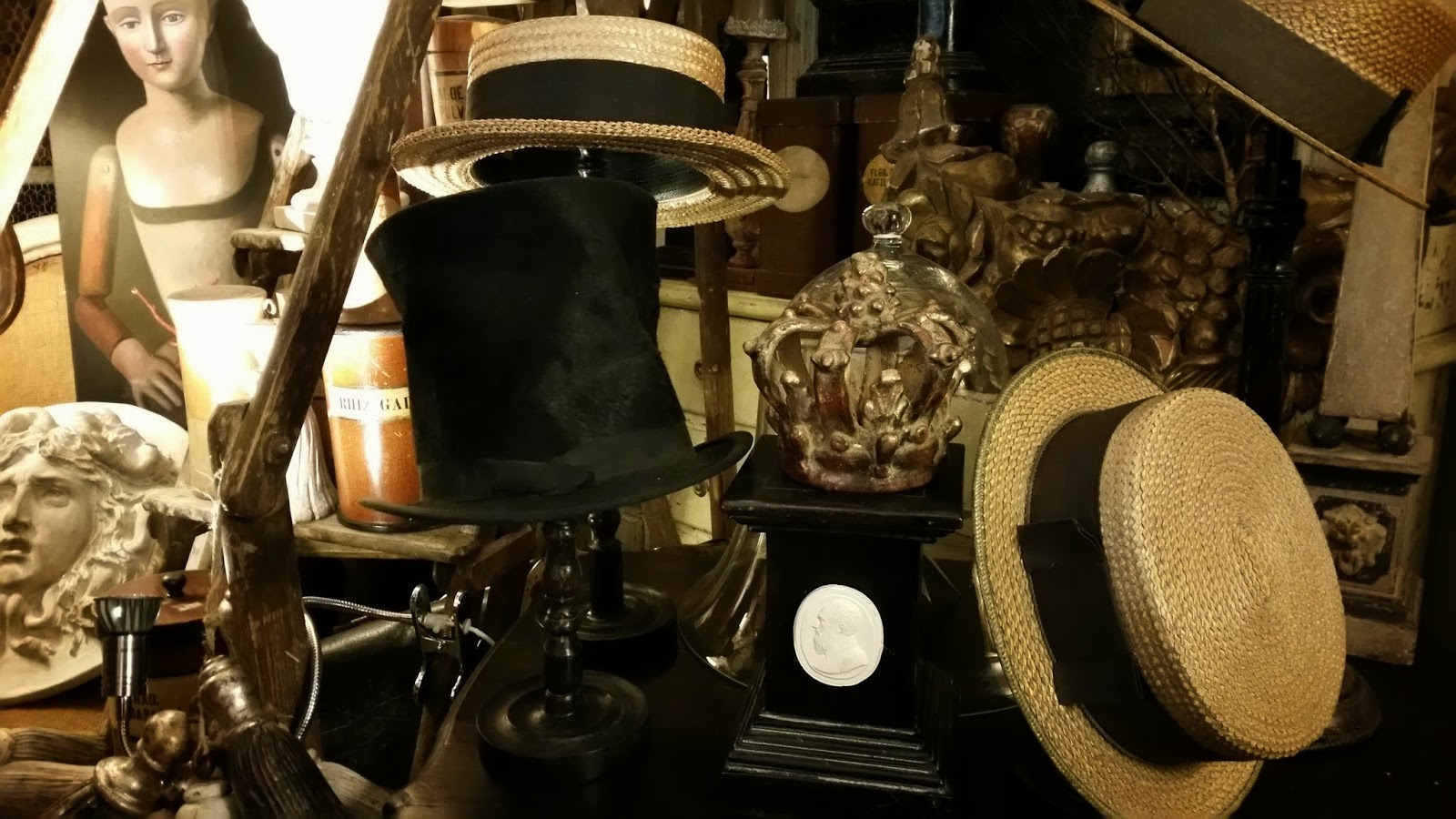 We had many more shops open to visit during the morning and also walked down some different streets than we did previously.  We visited the market...in full swing this morning...in the Santo Spirito Plazza.  I saw the church was open and rushed over.  I got inside for just a couple of photos before they told us all to leave...we were not the only ones who'd come in while the doors were open to move a large painting out to a waiting truck.  It is always closed on Wednesday!  Oops. 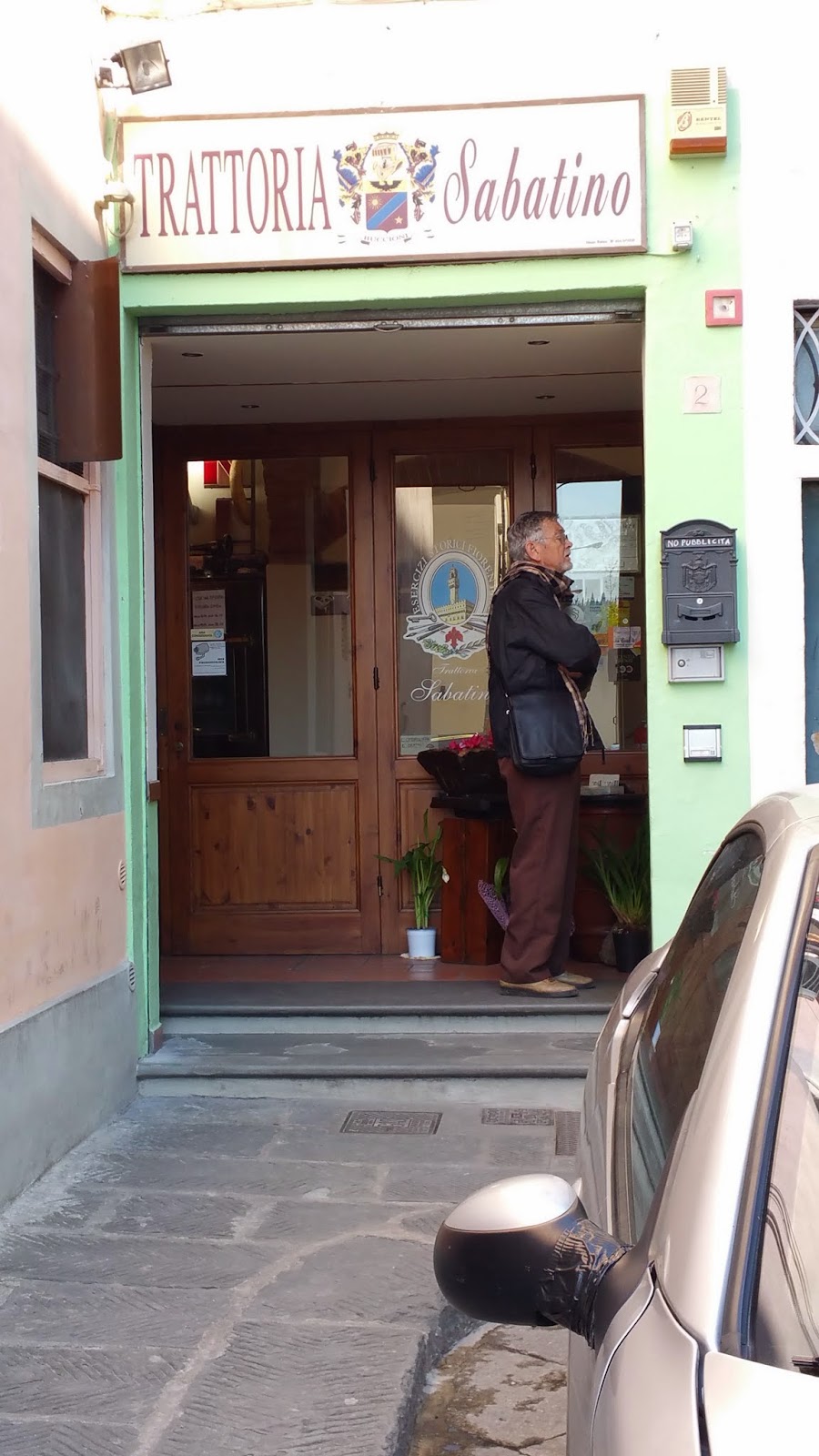 We continued walking to the church of Santa Maria dei Carmine and again being before noon; the church was open.  This is the church that has the Brancacci Chapel that we visited last week.   We could see the Chapel across the church but were not allowed to get near it without paying the fees again to tour.  From there we walked to the old city wall again; found a recommended restaurant by Rick Steves that he says is very good and very cheap!  Then we walked all the way to the River and started back towards the city to see the waterfalls near the Ponte Vespucci.  People actually walk out on to part of it on the south side of the river.

Back into the neighborhood to walk more streets; churches were beginning to close as most do from noon until about four o'clock.  We reach the Piazza at Santo Spirito again and then walked on Via Romana to the Bobilli Garden Gate on the western tip of the massive gardens of the Pitti Palace.  Returning we found Via Maggio and walked all the way back to the river admiring the various Palazzos of the rich and famous in the fifteenth century. 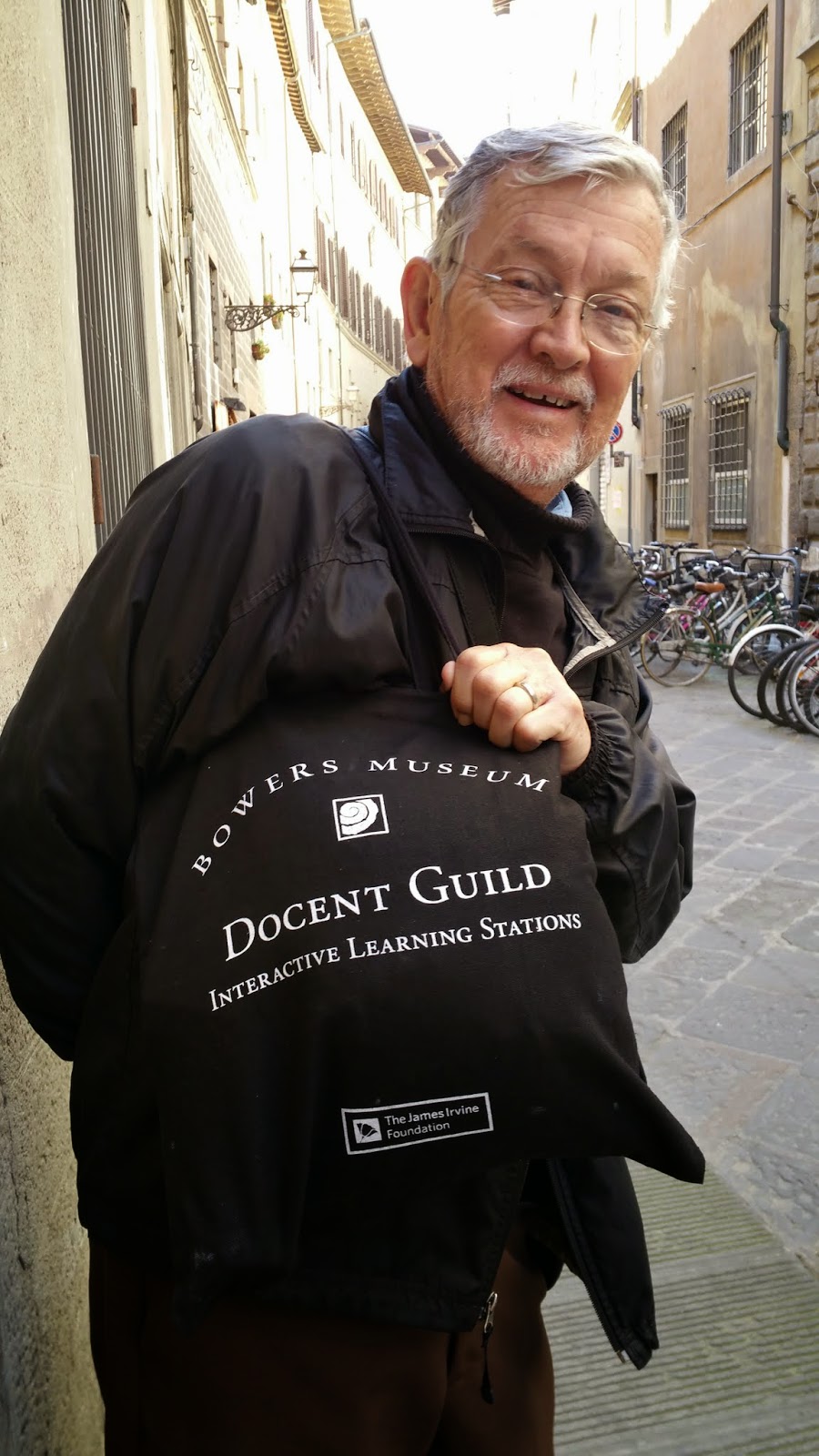 Soon we were back to reality and after passing the Ponte Vecchio we stopped at the grocery store for supplies before arriving home about 2:30 pm.  We'd walked 5.88 miles today.  We had a snack and then enjoyed some down time with the window open for the warm spring air!   Yes, spring has returned and we put the gloves and hats away.  People are walking around without coats and I'm sure by tomorrow we'll see lots of shorts on many people.

About 3:30 pm I decided to walk up to see the church at the top of our hill, a beautiful church that is visible from all over Florence called St. Miniato al Monte.   It took me about half an hour to walk first to the Michelangelo Overlook and then to the church just beyond.  It is very old and has a cemetery that surrounds it.  I enjoyed all of the frescos on the walls and the very unusual design of the church.  On my 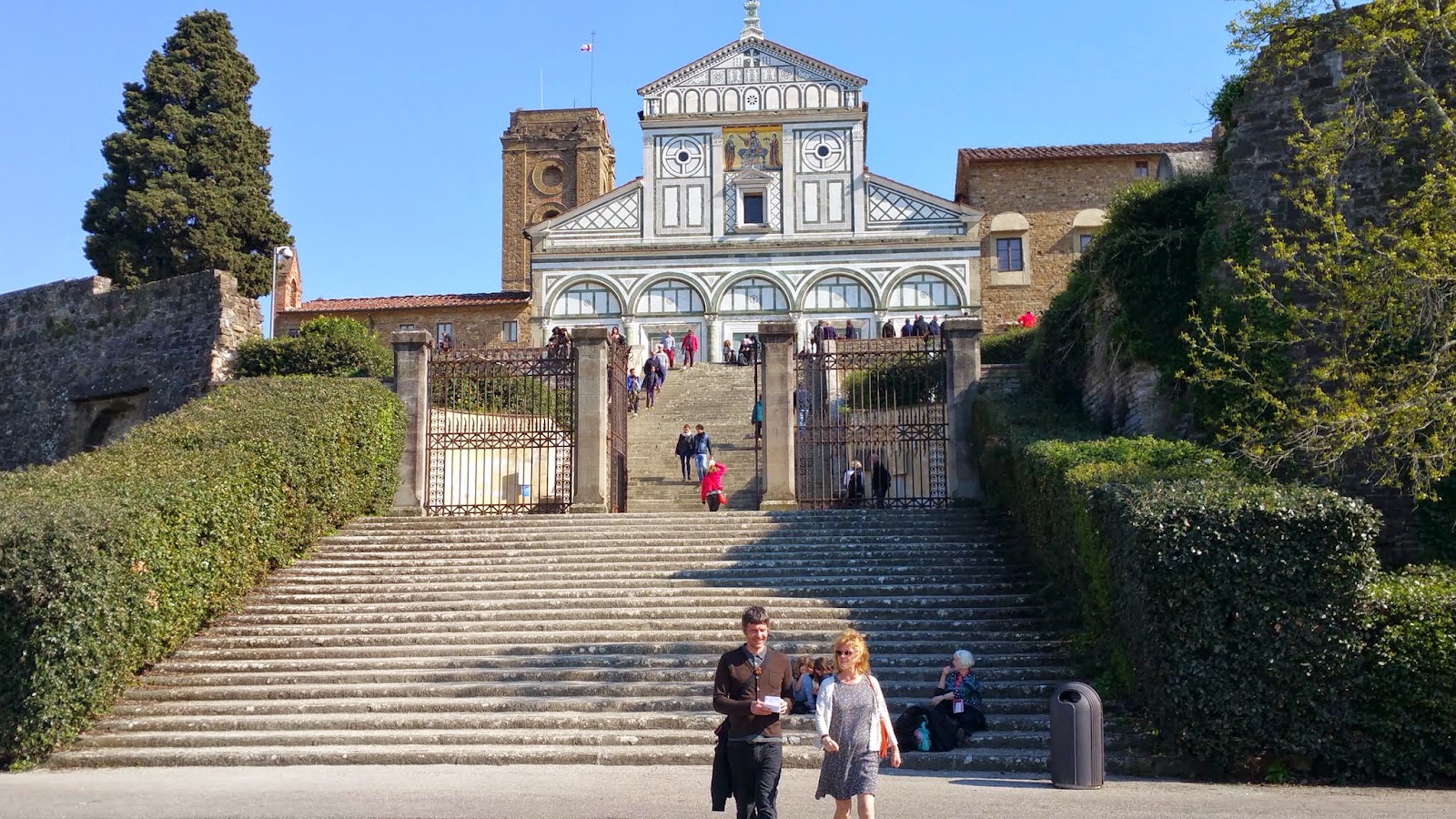 way home I walked through the Rose Garden that covers one side of the hill from the steps of the Michelangelo Overlook.  People were really enjoying the sunshine today and the flowers are starting to bloom.  But...the rose bushes have yet to bud.  I totaled 7.79 miles for the day!

Jim was ready to play cards by the time I arrived home at five o'clock.  We stopped mid-game and fixed our dinner but I did finally win a game tonight!  He's been winning twice as many games as I have so it was nice to win one tonight!  Thanks for joining me on our journey today.

Awesome! I'm glad you had the chance to do this and it worked out so well. Its so loadable and amazing place.
tuscan wine tours