It's been a busy two days since I last sat down to journal.  Yesterday, Wednesday, was spent getting the French cell phones working, stocking the groceries for cooking in the apartment, going over twice to my twin sister's apartment to try to talk to the manager about their arrival time on Thursday.  No luck in finding the manger so we headed towards the Metro to check out our route for dinner with friends and the connection to the RER B train for our trip to the airport on Thursday. 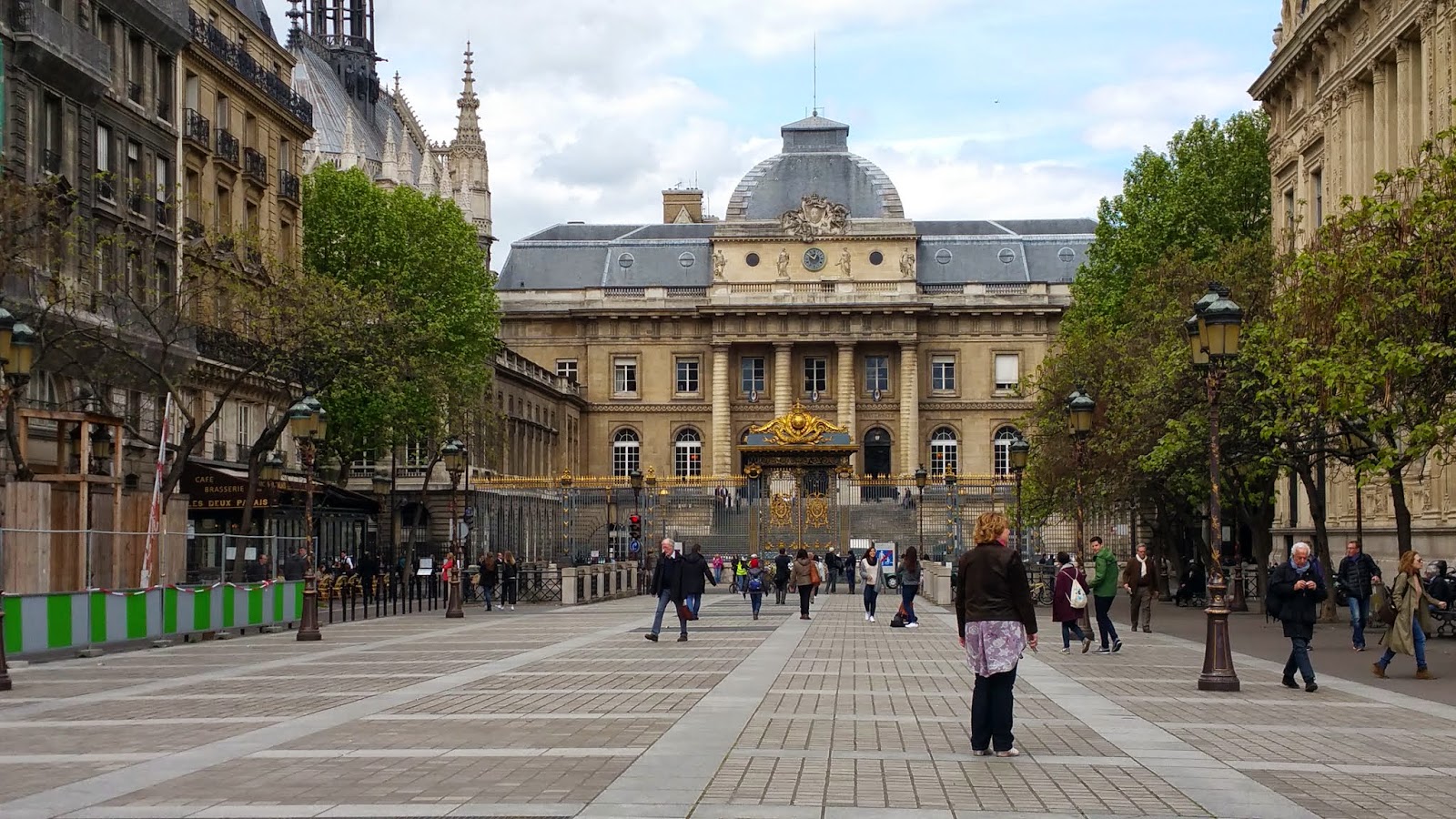 With that all accomplished we continued on the Metro to the stop at Cite which let us off on the island where we walked to the Information Booth in the Square at Notre Dame.  Picked up maps and gathered information for our ten days in Paris.   Then we walked over to St. Michel and enjoyed a crepe jambon and fromage lunch as we continued walking around the area of the Cluny Museum.  As we approached the street we saw a middle aged woman on a bicycle hit by a bus.  She was passing on the right as he was turning right.  Knocked her down but she didn't seem to be injured.  We left as she began negotiating with the bus driver who'd pulled over to the curb. 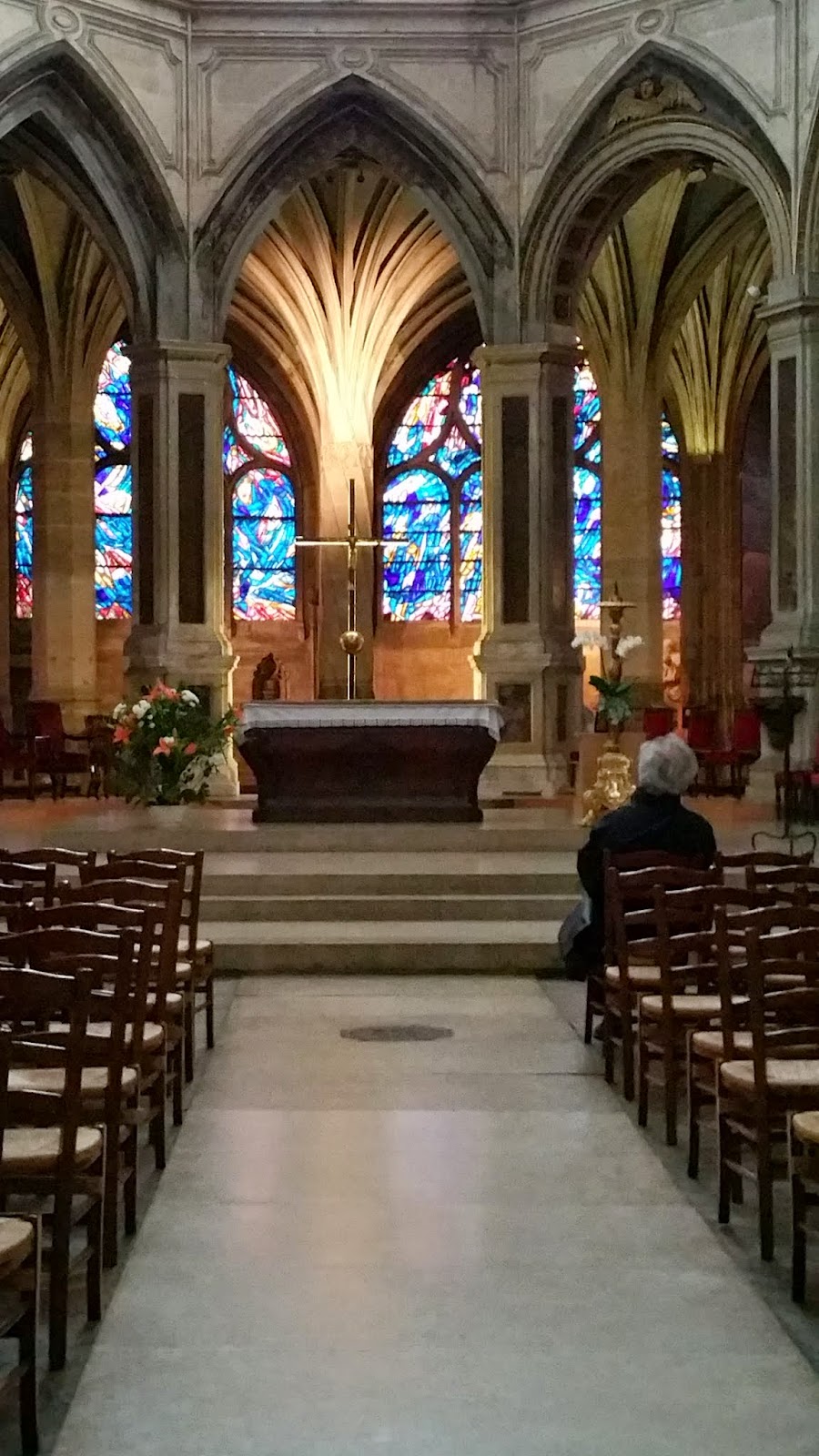 We stopped to enjoy the beautiful windows at St. Severin; a very old and beautiful church very near the hotel where we spent a week with our family to celebrate our fiftieth wedding anniversary in 2010; hard to believe that it's been five years ago.  So many memories.   We ended up walking all the way back to the apartment stopping to admire the Conciergerie and it's stunning clock tower that have recently been completely cleaned as we crossed the bridge over the Seine River.

We relaxed and enjoyed the afternoon and soon it was time to get dressed up a bit for our date with our young friends who live in Paris.  Nicolas had made reservations at Baroche for dinner at eight o'clock.  We rode the Metro to the Franklin Roosevelt Station and then walked up the Champs Elysees to Rue La Boetie.  We took our umbrellas but it still had not begun to rain.   We so enjoyed our evening with Nicolas and Maeliss.  Turns out it was also their wedding anniversary.   Nicolas leaves Friday for a business trip to San Diego and San Francisco.  The world gets smaller every year.  I met them years ago when they were first married and we were all on a tour in the outback in Australia.  Now they have three children! Maeliss called the manager at my sister's apartment and got all of the information for us for tomorrow.  So nice to have a friend who speaks both languages.  We walked back to the Metro in the rain and tucked in just before midnight!

Our alarm clock this morning went off at six o'clock, waking us up from a sound sleep.  We ate a small breakfast and were out the door to the RER B train to Charles de Gaulle Airport by seven o'clock.   Raining lightly but hard enough for umbrellas.   On the train we were surrounded by a group of Mormon Missionaries who had just completed their two year mission and were headed home to the USA.  Spirits were high and it was so nice to see so many young men in suits and ties looking forward to going home to their families.    We arrived at the airport by eight thirty and everything was going great until the crowds came to a dead stop. 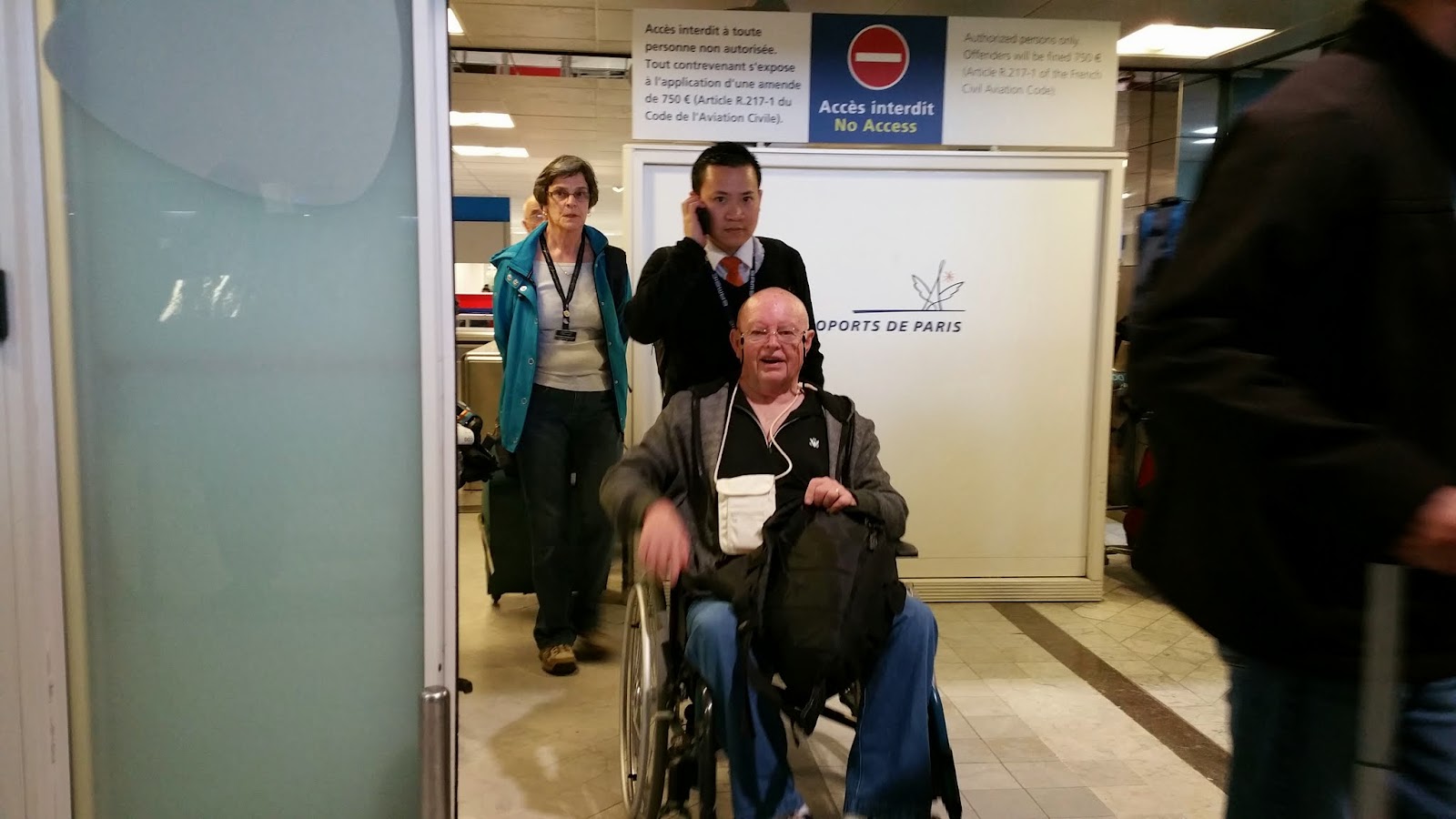 We thought it was just people checking in but soon discovered that there had been unattended luggage discovered and everything was shut down.  We were in Terminal 2C and needed to go to 2A!  The doors to the outside were locked and there were no vehicles moving in front of the building.  We could see the cleared area with many soldiers and police.   Fortunately, within about fifteen minutes they solved the issues and we were allowed to continue.  My sister Mary and her husband Phil arrived right on time but it took an hour for them to complete everything and come through the doors.  While we were waiting I watched the limo drivers waiting for their passengers; many now have the names on the IPads instead of on paper, modern technology. 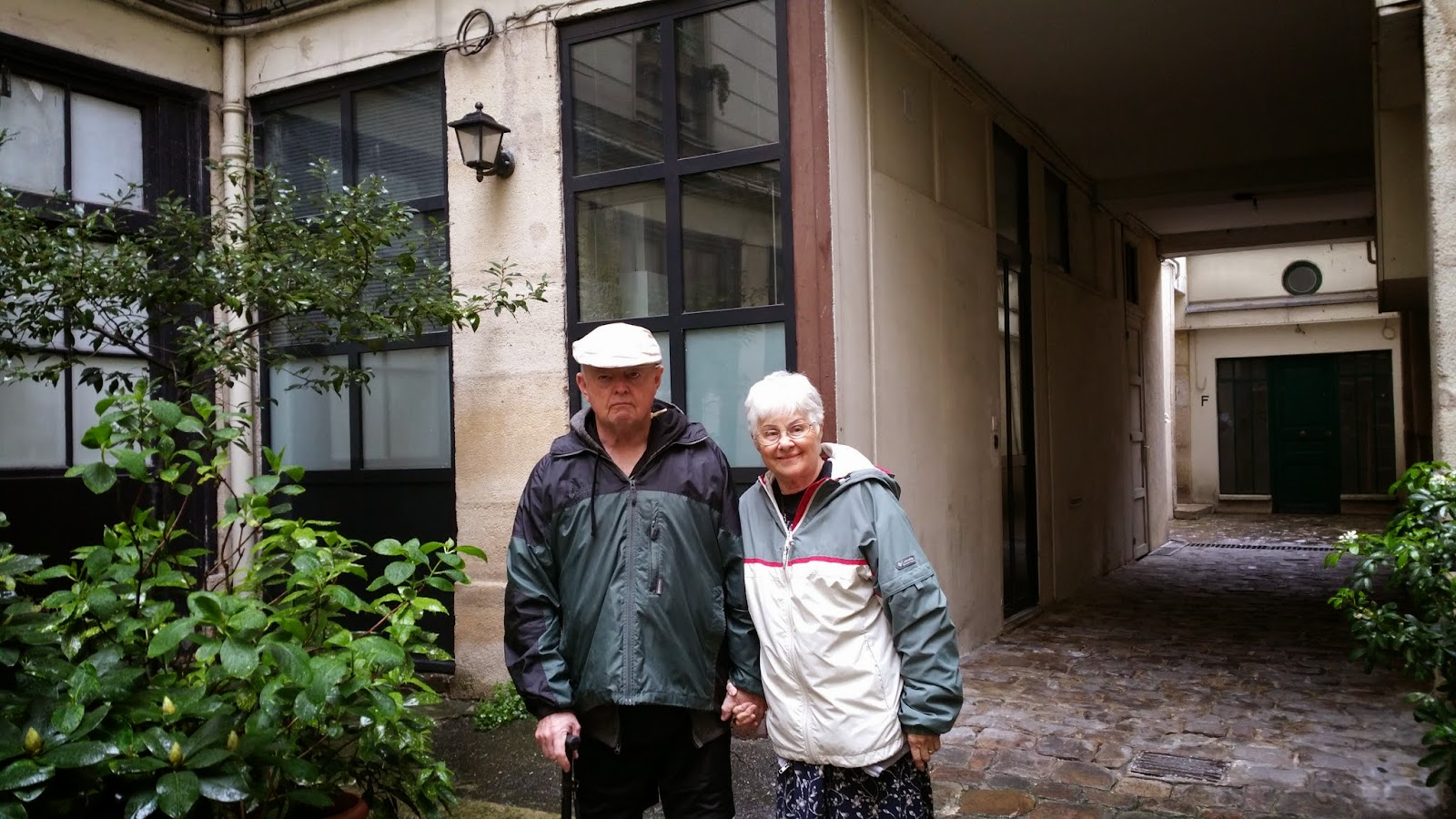 When they arrived we all piled into a taxi for the hour long ride into Paris on a rainy morning.  The rain continued all day; sometimes softly but always coming down.  We're expecting one hundred percent chance of rain tomorrow so we're going to do a sleep-in morning.  We got them settled in their apartment that is less than a five minute walk from us.   Then let them enjoy their time until four o'clock when we went over and cooked dinner in their apartment as Phil is unable to climb the stairs to our apartment.  They have an elevator.  After dinner we went out and walked their block in the light rain to give them a taste of their neighborhood.  It's a great street with many different types of shops.  Then back inside for a game of Hand and Foot cards:  twins vs boys.   Winner still undecided as we still have one more hand to play tomorrow afternoon.

Hope you've enjoyed my recap of our two days; it's so nice to be back in Paris again.
Link to Picasa Photo Album