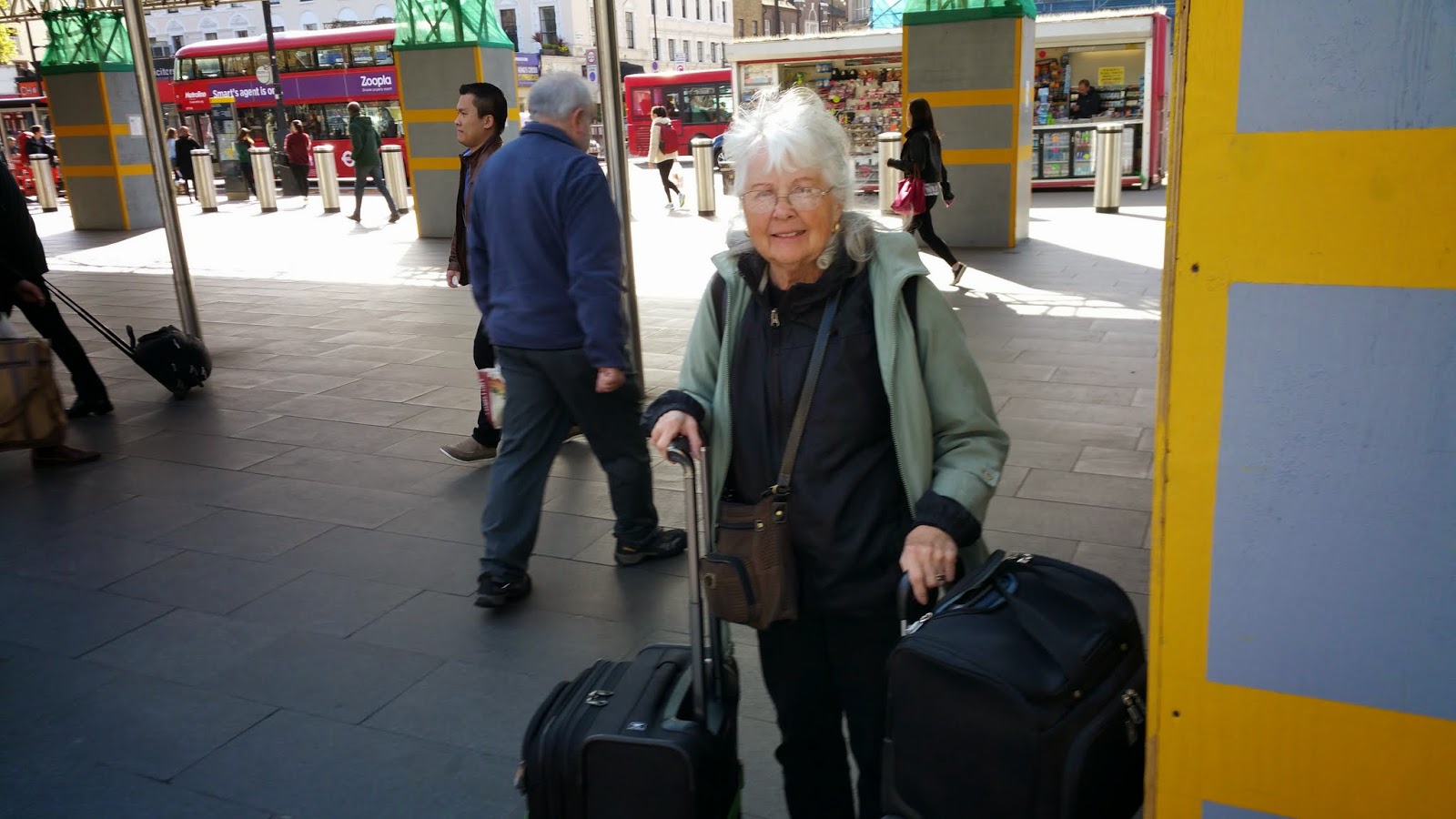 Well it's Wednesday morning and we are starting our first full day in Paris today.  Yesterday was busy with travel and moving into a new apartment in the Marais on the right bank of the Seine River.

We were up early, ate our English breakfast at the hotel and walked the two blocks to the Underground at Hounslow Central pulling our luggage.  NO RAIN!  Thanks for your prayers!   We'd made sure that we had enough money on our Oyster Cards for the trip the day before so no problem with tickets.  But...those stairs...a young lady grabbed mine before I started up and I immediately took the small roller bag from Jim who had to take his large suitcase up the first half; at the landing a young gentlemen grabbed his big case and suddenly we were on the platform with energy to spare! 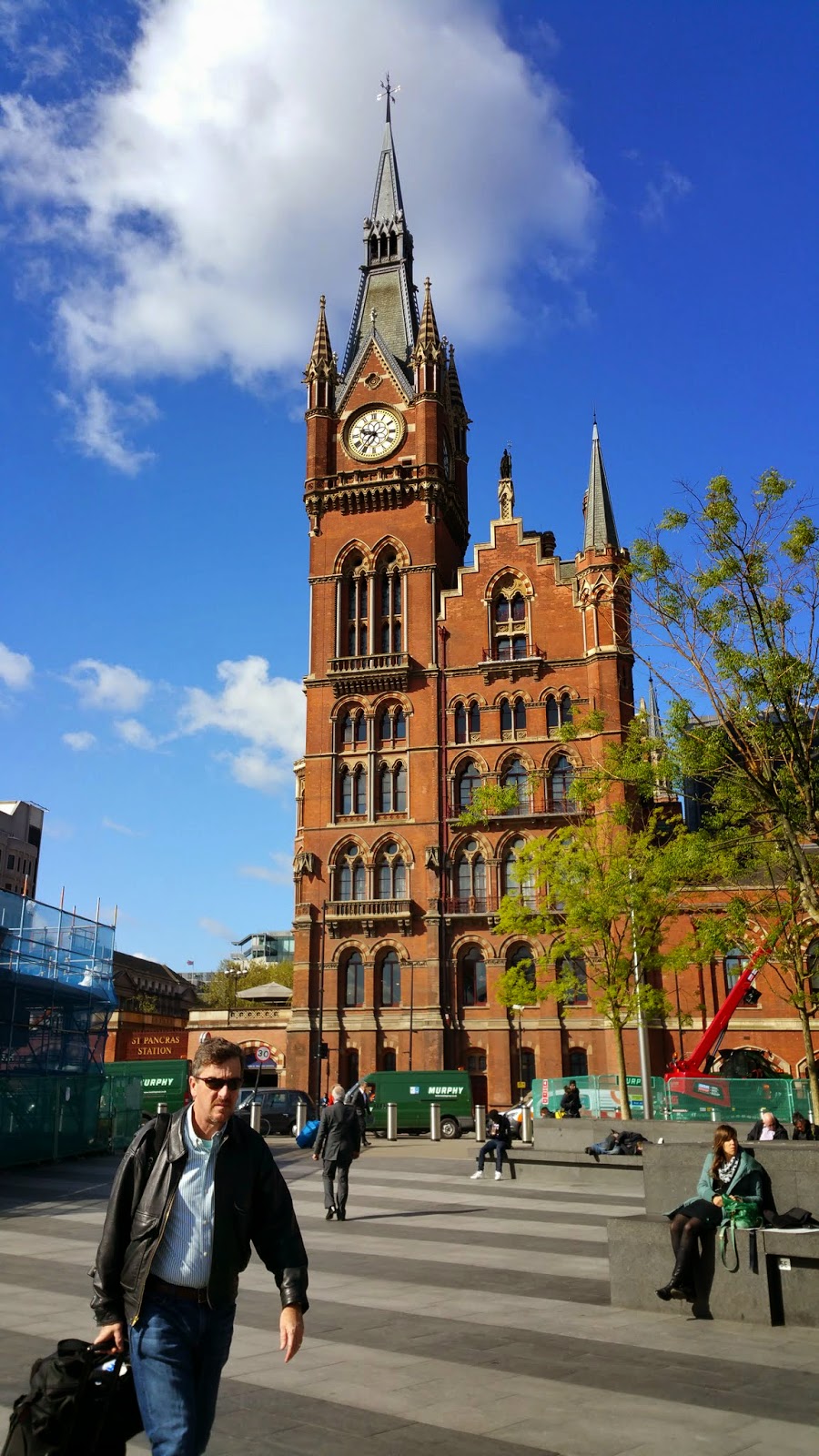 Because we were leaving about half past eight we paid a bit more for the fare but we wanted to get to the station before any possible rain and we were not all that comfortable with the new station.   This was our first trip across the English Channel using the Eurostar in the chunnel.  So, God bless Jim for putting up with my planning, we arrived at the station of King's Cross/St. Pancras International Station by nine thirty for our train that left at twelve twenty-five!  Just a tad early but we made good use of the time.  There was free wifi so I was able to post a video of the gentleman playing the piano in the concourse; and a wonderful photo of Jim reading his newspaper, ignoring the passing crowds.  He was totally unaware that I'd returned from my visit to the Ladies Room.   Notice also the very long Champagne Bar that stretches above the concourse....but too early for that!

At noon they let us move into the train platforms and right on time we were moving away from London.  There was only one stop at Ebbsfleet International to pick up more passengers at the Southern Station before going for the big swim!    We'd been told to chew food or gum to relieve the pressure on the ears.    You really can tell that 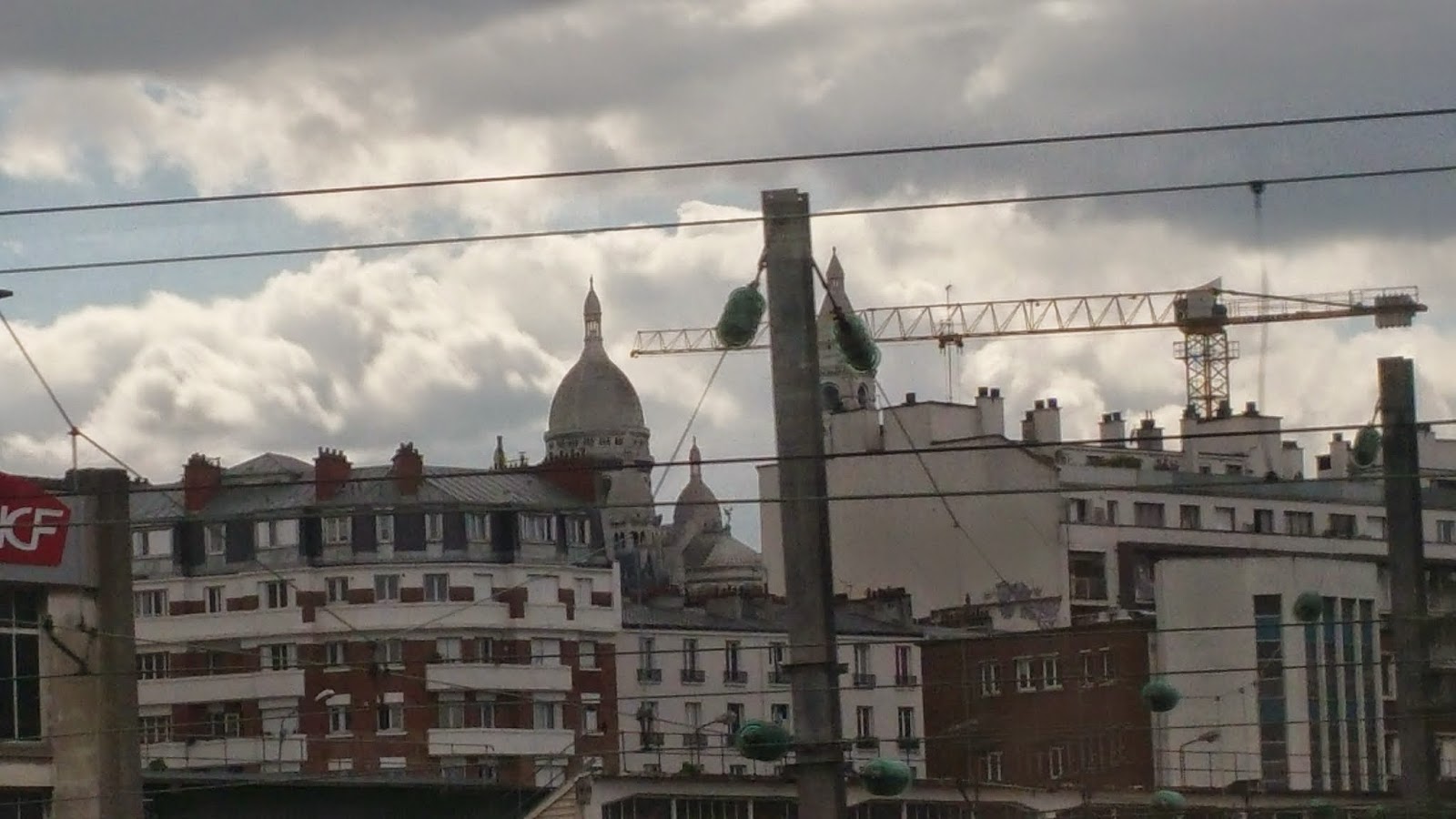 you're going down and that you are deep under.  Only a short portion of the trip is under the Channel.  We'd picked up lunch at the station before boarding so enjoyed our sandwiches on the train.  We lost an hour because Paris is an hour ahead of London; so it was only a two and half hour trip.  The train is very fast which makes it difficult to take photos but I managed to get a few of the country side and then some of Sacre Couer off in the distance as we entered Paris.  A fun way to cross the channel. 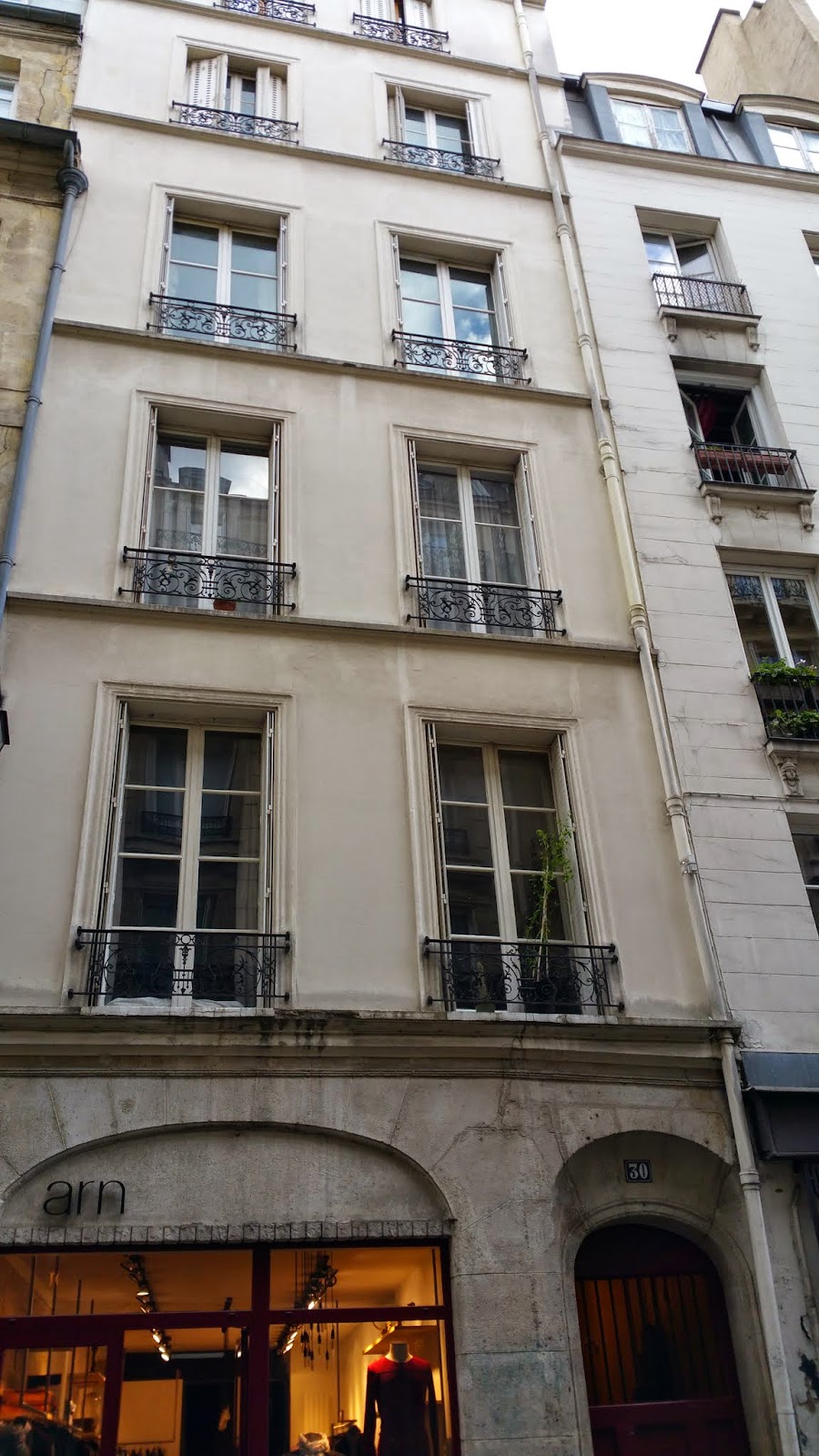 We walked out of the station and a gentleman asked if we needed a taxi and before I could grab Jim's arm we were walking with a driver taking us to his cab.  Jim asked how much to our address and he said sixty euro!   No way...yes...we turned around and entered the Taxi Que like good little tourists and when our turn came we ended up paying fifteen euros!  We have been in touch every day recently with the owner of our studio apartment that we've rented in the Marais, a very busy area of the city on the right bank of the Seine River.   We walk up two long flights of stairs to the apartment...no elevators...but once inside it is very nice.  He's just moved into this one and was finishing it as we arrived.  We'd not seen any photos, only of the previous one on the fifth floor in the same building; so we called this our mystery apartment.  It is larger than the first one as the bed is on a loft and we climb up a ladder to bed!   We will be nice and limber by the time we leave.

We walked the area, stopping to see the outside of my sister's apartment which is less than five minutes to walk.  Then we went across the street to the bar and had a delicious dinner, Jim enjoyed his canard (duck), before returning to the apartment which was now ready for us.  We'd purchased tickets 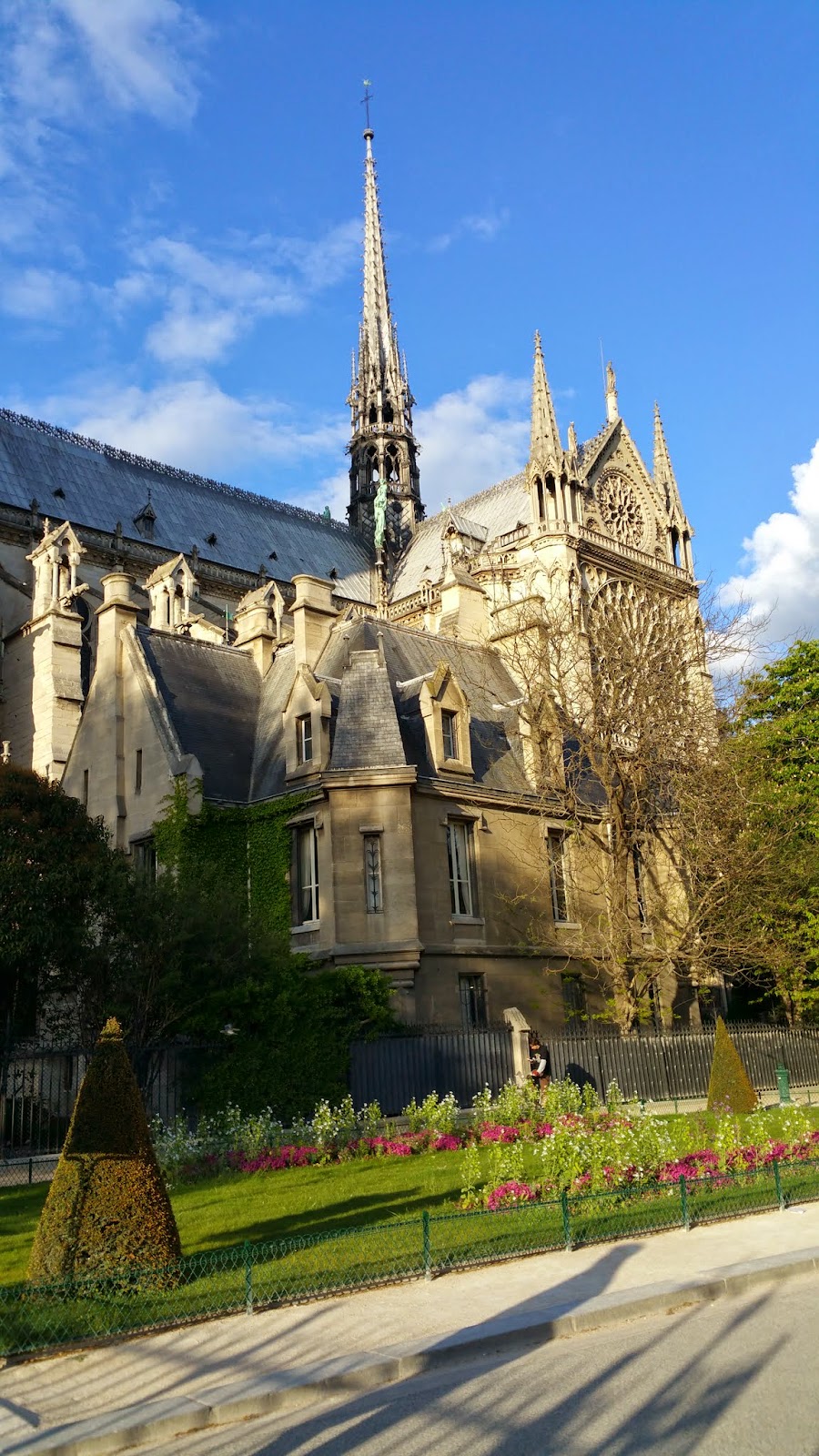 for an organ concert at Notre Dame that started at half past eight in the evening.  We walked the short distance to the cathedral, arriving about an hour early so we had time to wander around.  We always find changes even though we were just here in December/January of 2013.  The Cathedral and Square is now dedicated to Saint Pope John Paul II.  There is a beautiful statue of him that was erected in October of 2014 under the rose window overlooking the Seine River.  .

The concert was more modern than we'd ever expected so only stayed for half of it.  Then we walked back to the apartment past the Marie for the City of Paris.  The wifi is extremely good here in the apartment; a great television except for the language....we did enjoy the English in England!   Soon we were climbing up the ladder to our bed in the loft...no, one can not stand up in the loft; perfect for children but a bit hard on these old bones.  Another serendipity experience.  Dinner tonight with our Paris friends and off to CDG Airport at seven o'clock tomorrow morning to greet my sister Mary and her husband Phil.  au revior