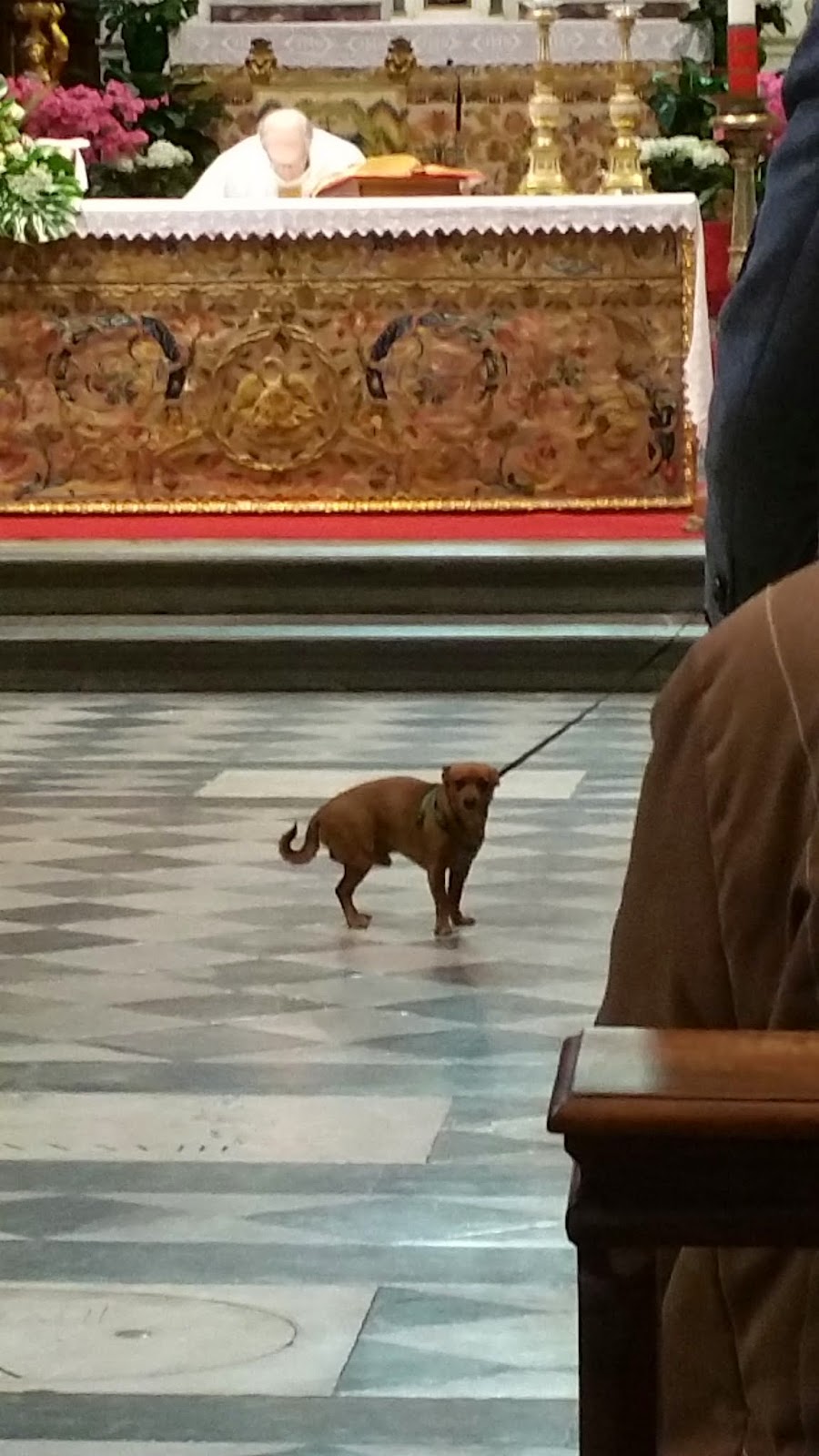 I woke up this morning with a definite clogged head.   Jim turned on the television sans sound since it was all in Italian; and watched the Formula One Race taking place in Shanghai China today.  I was soon out of bed and off to the nine o'clock Mass at St. Felicita's where we attended mass on Easter Sunday.   BE SURE TO READ THE ONE PRIOR TO THIS AS I'VE POSTED TWO BLOGS TODAY.

As I was walking towards the church that is next to Ponte Vecchio; a runner came at me wearing a number pinned to his shirt.  Then I remembered the Half Marathon that is being run today; apparently he was warming up as I never saw another one.

We had an interesting visitor at mass today.  A small dog on a leash with his owner; kept us all entertained but we never heard a sound from him.  After he returned to his pew from communion I noticed that the dog was doing some deep stretching after enjoying the movement of walking to and from the priest.   Again, there were only about thirty of us in the church that was built to hold hundreds.  Such a shame that their attendance is so poor here in Italy. 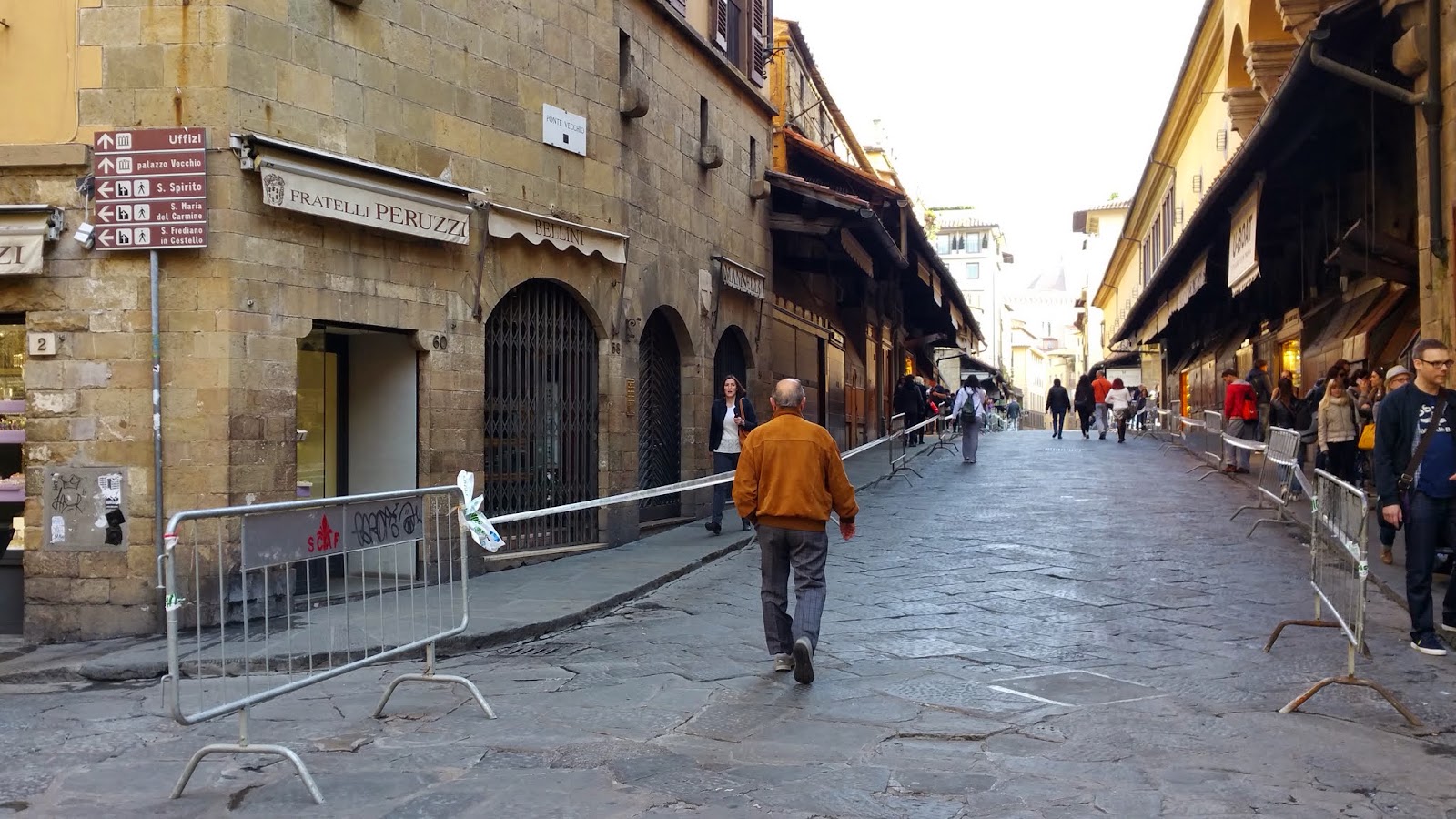 After mass I noticed that the street on the Ponte Vecchio was cordoned off to keep the pedestrians out of the way when the racers cross the bridge.   I soon discovered they were running along the Arno River at this time on the North side.  I expect them to run down the South side at some point but I'm  not planning to camp out on the street to watch!

Jim's race was finished when I arrived home; he was busy on his computer and eating breakfast.  I joined him and then did my post of yesterday's blog.  I'm starting this before we head out to catch the bus for another excursion and hope to finish it tonight before bed.  I'm still trying to dry the laundry that we washed by hand yesterday.  It's hanging on the lines outside the bathroom window.   Yes...very European! 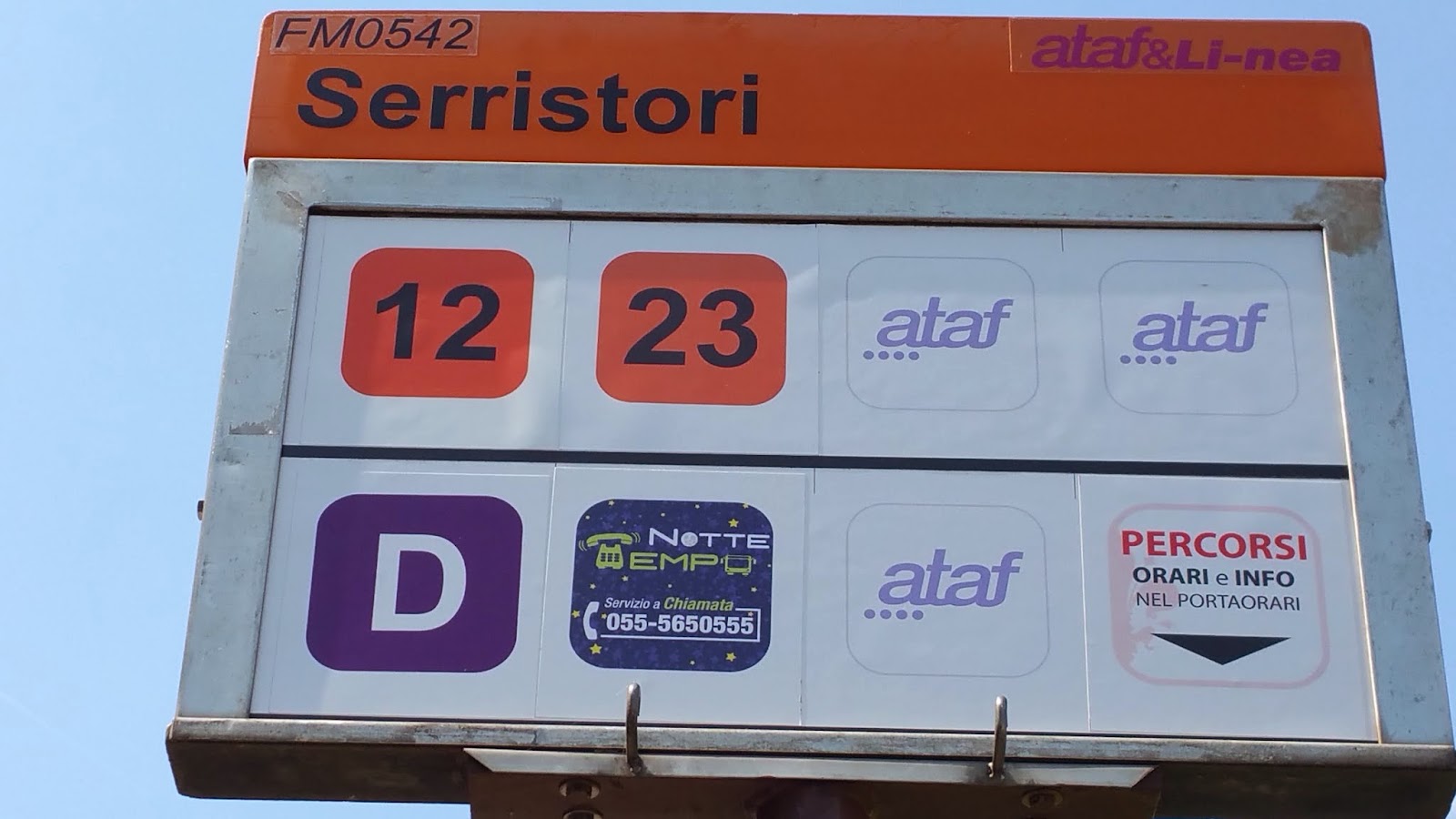 About two o'clock we headed out on another adventure:  a bus trip up the hill behind us to visit the church of San Miniato above Michelangelo's Overlook.   We took the long way of getting there by climbing aboard Bus # D and riding it all the way to the train station.

There we waited a bit for Bus # 13 and it took us through entirely new area.  We saw a Russian Orthodox Church and some beautiful and expensive looking homes before we once again crossed the Arno River to the south side.  Up the hill we went and he dropped us off at the Michelangelo 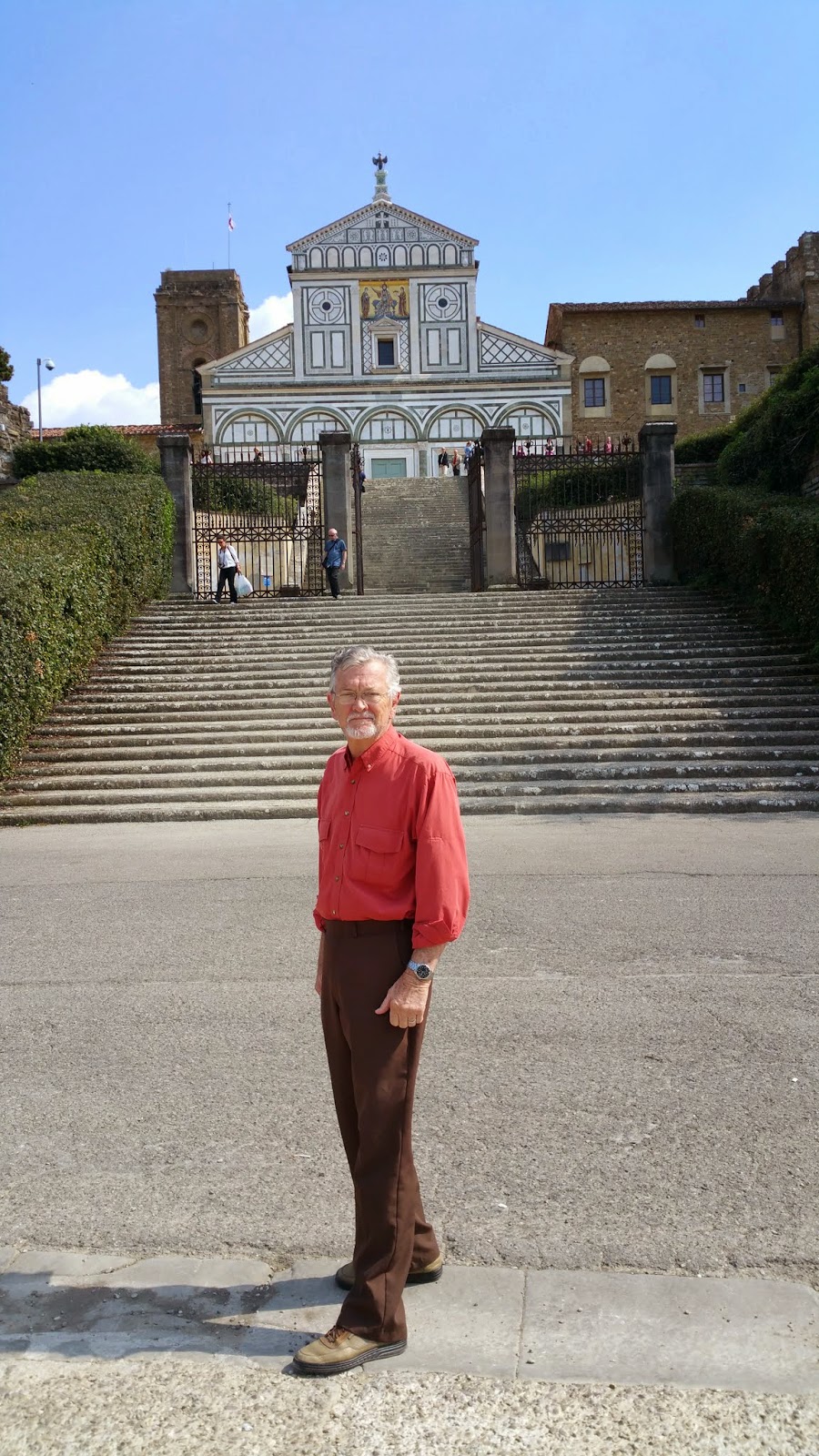 Overlook parking lot.  We walked from there to the top of the marble steps that lead into the cemetery and the Monastero di San Miniato.  When I went up last week there were many priests wandering around and everything was open.  Today many of those areas were closed.  But Jim did enjoy his visit to the church and cemetery.   From there we walked down to the Convent and Church of San Salvatore al Monte Alle Croci....a church that was under repairs last week and partially closed was open today and we were able to visit the church.

I took Jim on a tour of the Rose Garden that tumbles down the side of the hill and ends up very near to our apartment.  We walked down our street to find #44 San Niccolo where the artist that has made a name for himself by painting famous people (ancient and new) in diving masks. 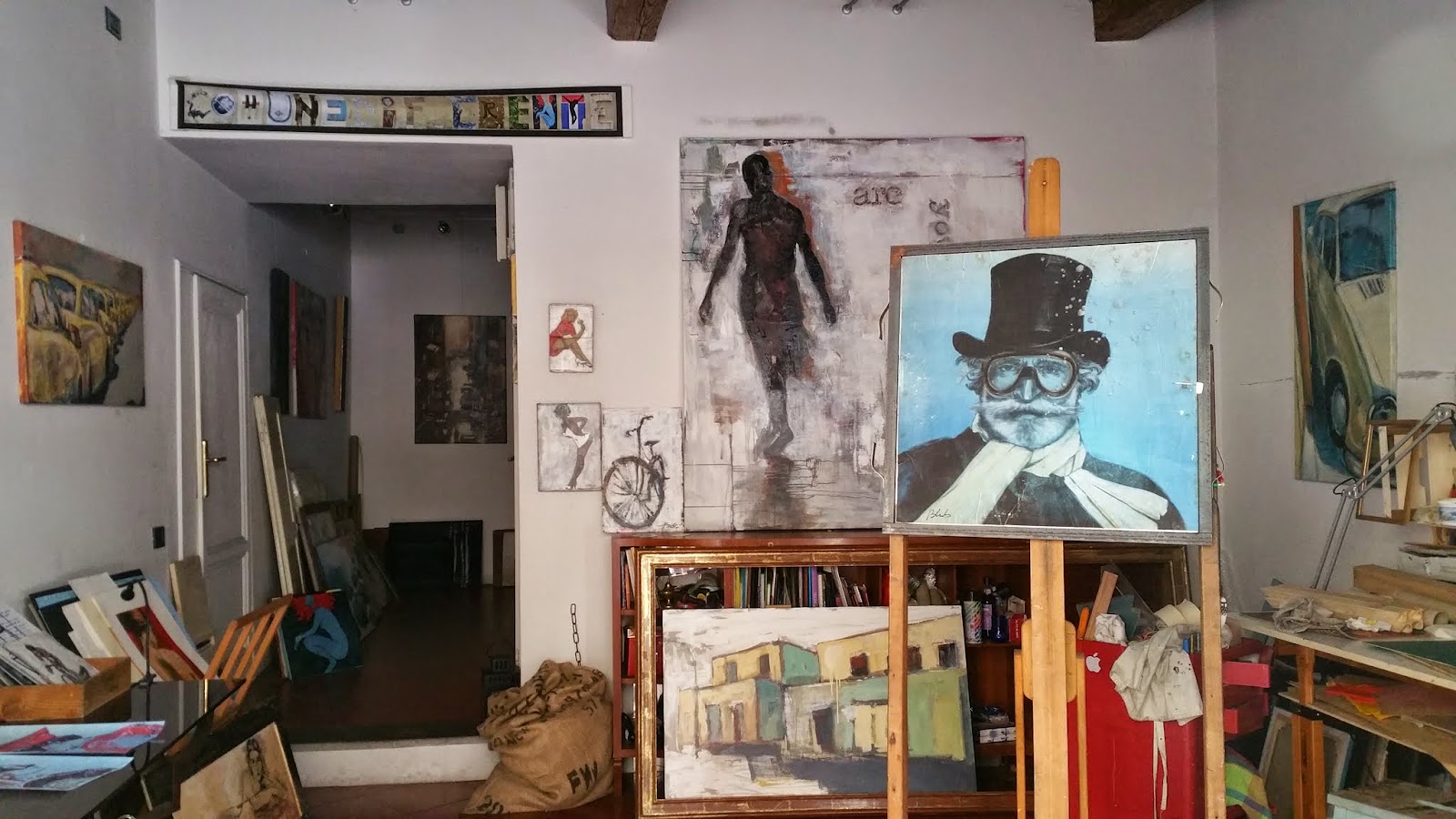 The artist is known as "Blub"....he or she has remained rather anonymous even now but is well known here in Florence.  There was even an article featured in our program guide at the Theater on Friday evening.  Jim is of the opinion that it has to do with the floods of Florence both  past and future.

One last item of interest on Florence....yesterday on the bus a couple of teenagers sat down  across from us and continued their non-stop talk...two were seated and one was standing.   The one seated across from me got out her tobacco, her paper and a funny little white thing which she held in her teeth.   She continued to talk and fill the paper with the tobacco and then rolled it but before completing the job she put the tiny while thing in one end...it was a filter.  When finished she nonchalantly put the new cigarette in her pocket for later and put her equipment away....never missing a beat in the conversation.  It was as though we didn't exist....


And this is one of the reasons we love to ride the buses to witness the real world around us!   Our mileage today was rather light, only 3.54 miles.  We leave tomorrow to fly to England on Vueling Airlines....will not be posting tomorrow....ciao...