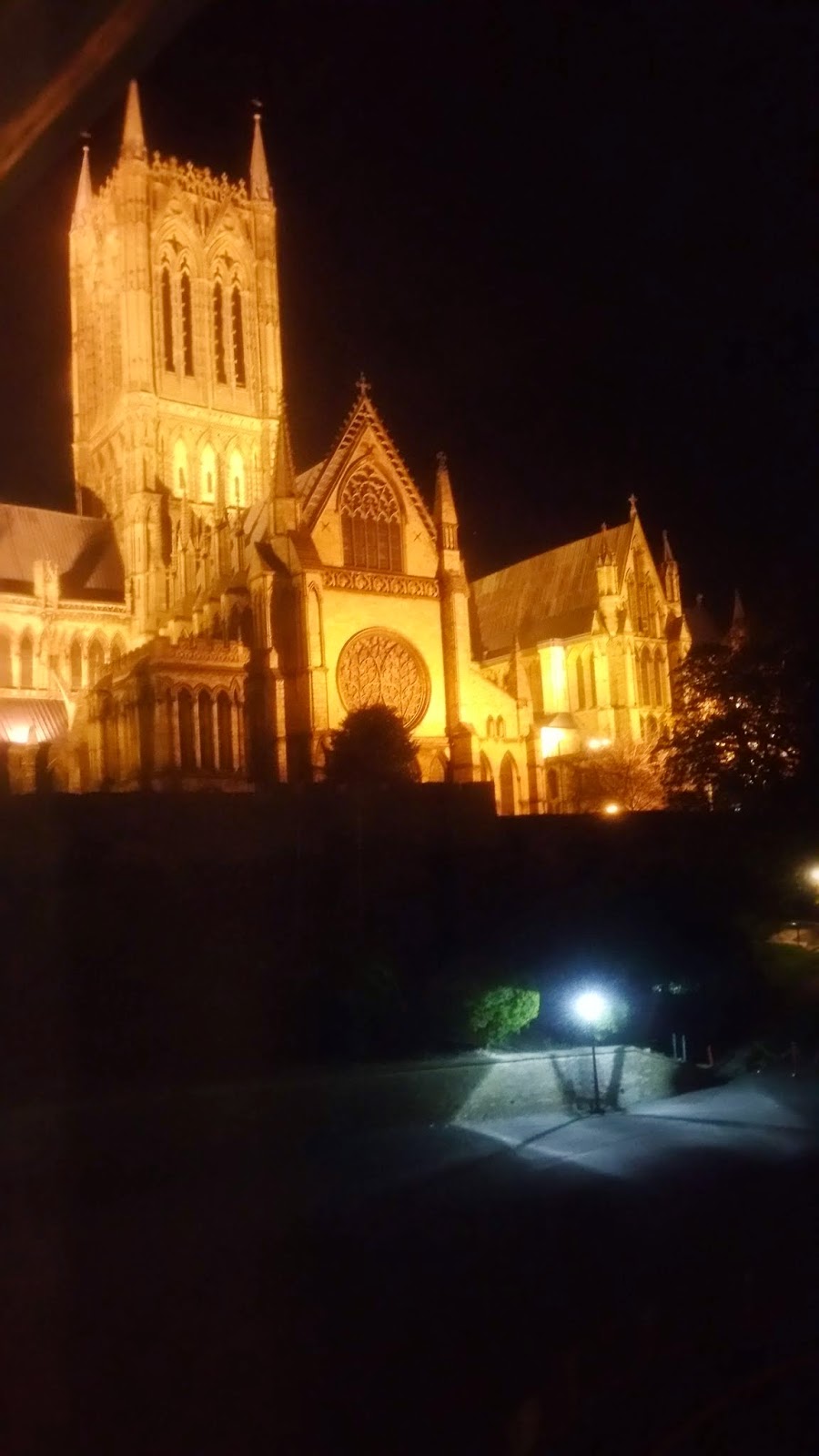 It's Tuesday evening and our day started about nine o'clock after we finished a wonderful English Breakfast with your choice of foods and all included in the the charge for the room.  Jim enjoyed the full English Breakfast but that was just too much for me; I enjoyed cereal, fruit and coffee!   The photo of the cathedral you see was taken from the window of our bedroom last night after dark.  I did sleep with earplugs but discovered this morning that the bells do not ring between 11 pm and 7 am.

We elected to go the longer route again and had beautiful roads all the way north to York.  We did pass two Nuclear Power Plants....one working and one not working; plus many of the giant wind machines that are replacing the dangerous old nuclear plants.  I've also seen several large fields of solar panels also.   We bypassed all of the large cities so what you see is countryside.  One fun area that we passed was Sherwood Forest and we had a sign about the "Home of Robin Hood" and also Robin Hood Airport. 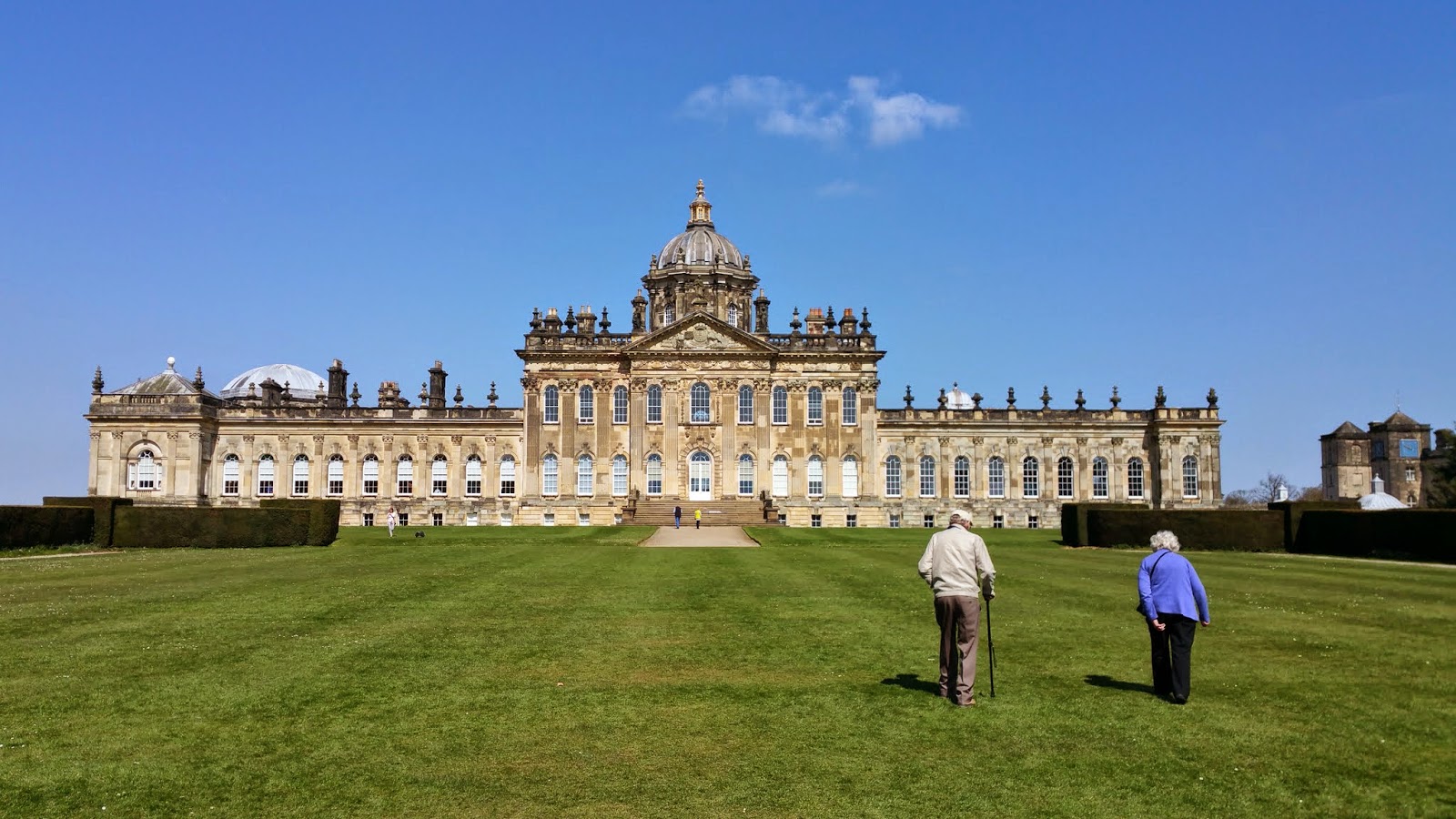 Shortly after eleven o'clock we arrived at the estate known as "Castle Howard".  Not actually a castle but a home that took one hundred years to build some three hundred years ago.  It was originally built by the Howard Family and is now owned and lived in by the fifteenth Earl of Carlisle, a branch of the Howard family.   The huge home is out in the countryside and still has one thousand of the original thirteen thousand acres.   The Earl and his family live in one wing of the property and the wing that visitors tour is used to entertain guests during the holidays.   This magnificent house contains world renowned collections and sits in a sweeping parkland dotted with statues, temples, lakes and fountains. 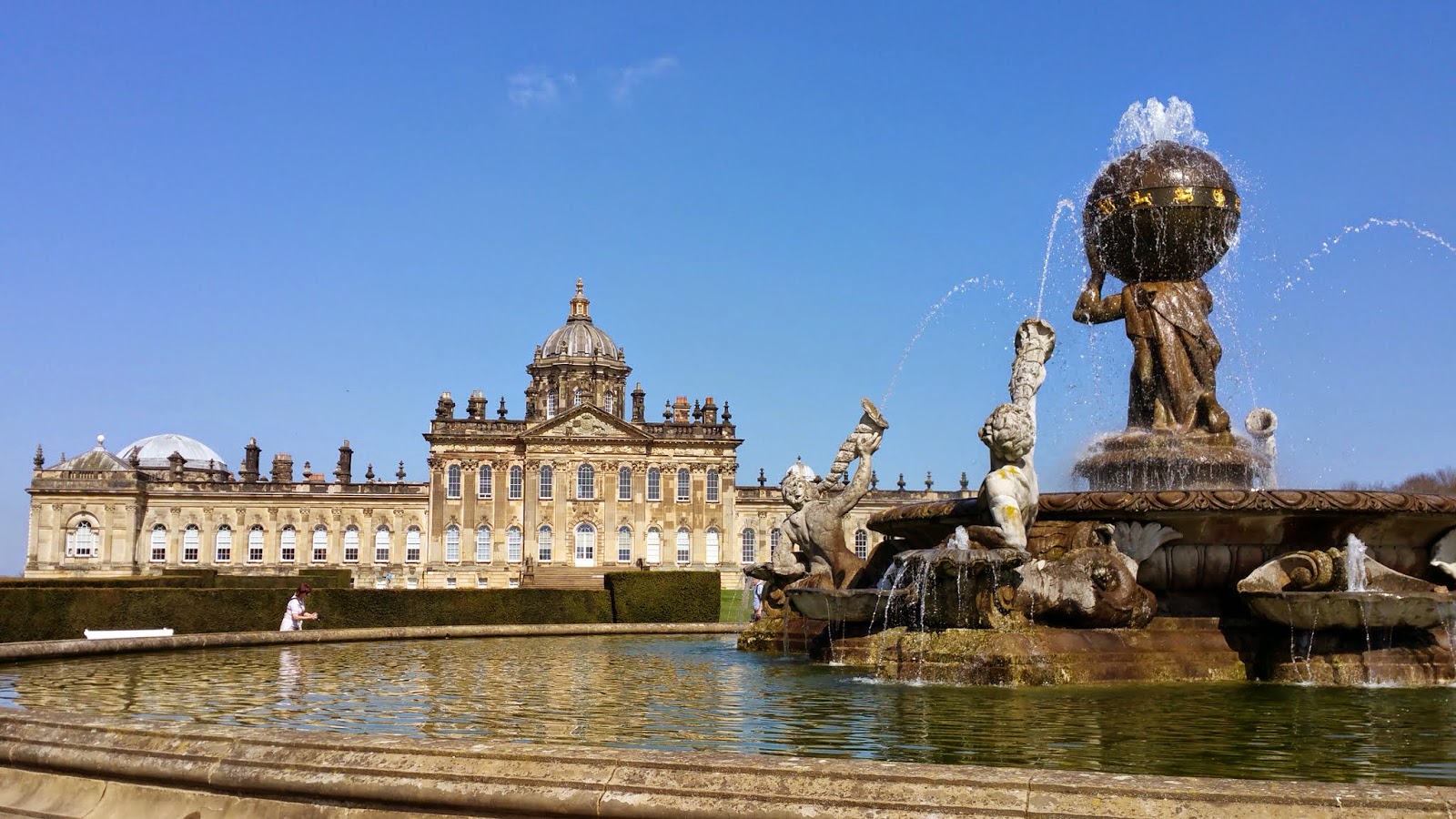 We drove several miles through various gates before entering the area of the house.    We passed through the Visitor's Center and purchased our tickets that allowed us to enter the house anytime during the day and to visit all of the grounds and the boathouse.   There is a trolly car that runs between the house, the boathouse and the Visitor Center.  We decided to walk to the house as the flowers are beautiful and it was a wonderful way to approach the house.  We also stopped and spent some time in the Rose Garden along the way. 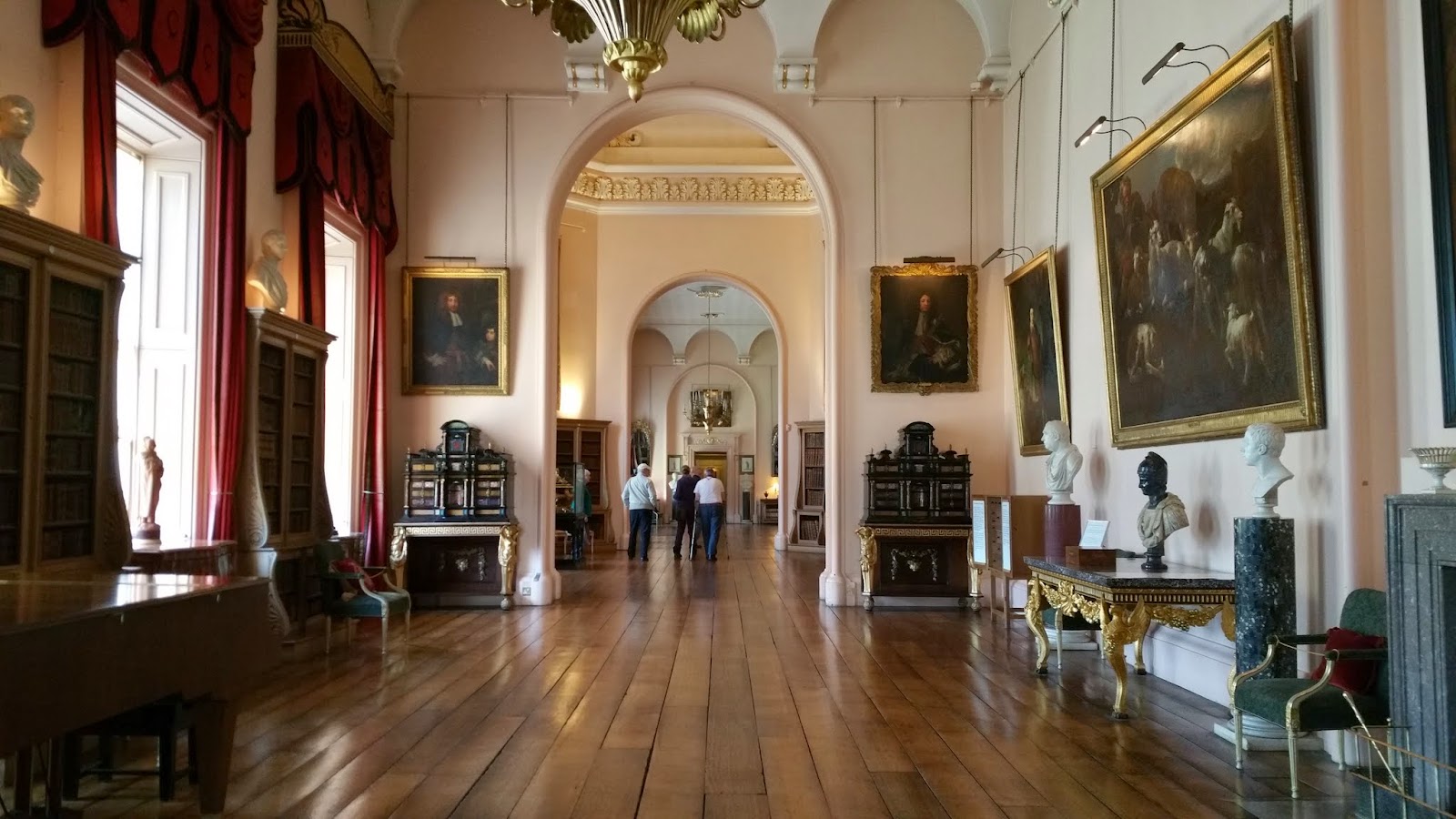 There are guides in every room to answer questions and to share stories about the house and family with visitors as you stroll through at your own pace.  There was a devastating fire in 1940 that is a story all by itself.    The house was also used to film the "Brideshead" movie and television shows.   I've read that it costs nearly two million English pounds per year just to maintain the house; add to that the cost of maintaining a thousand acres and major repairs and restoration.  One can soon imagine why the old families are opening up their homes to visitors from around the world.   It's that or start selling the land and the priceless heirlooms that were collected over the centuries. 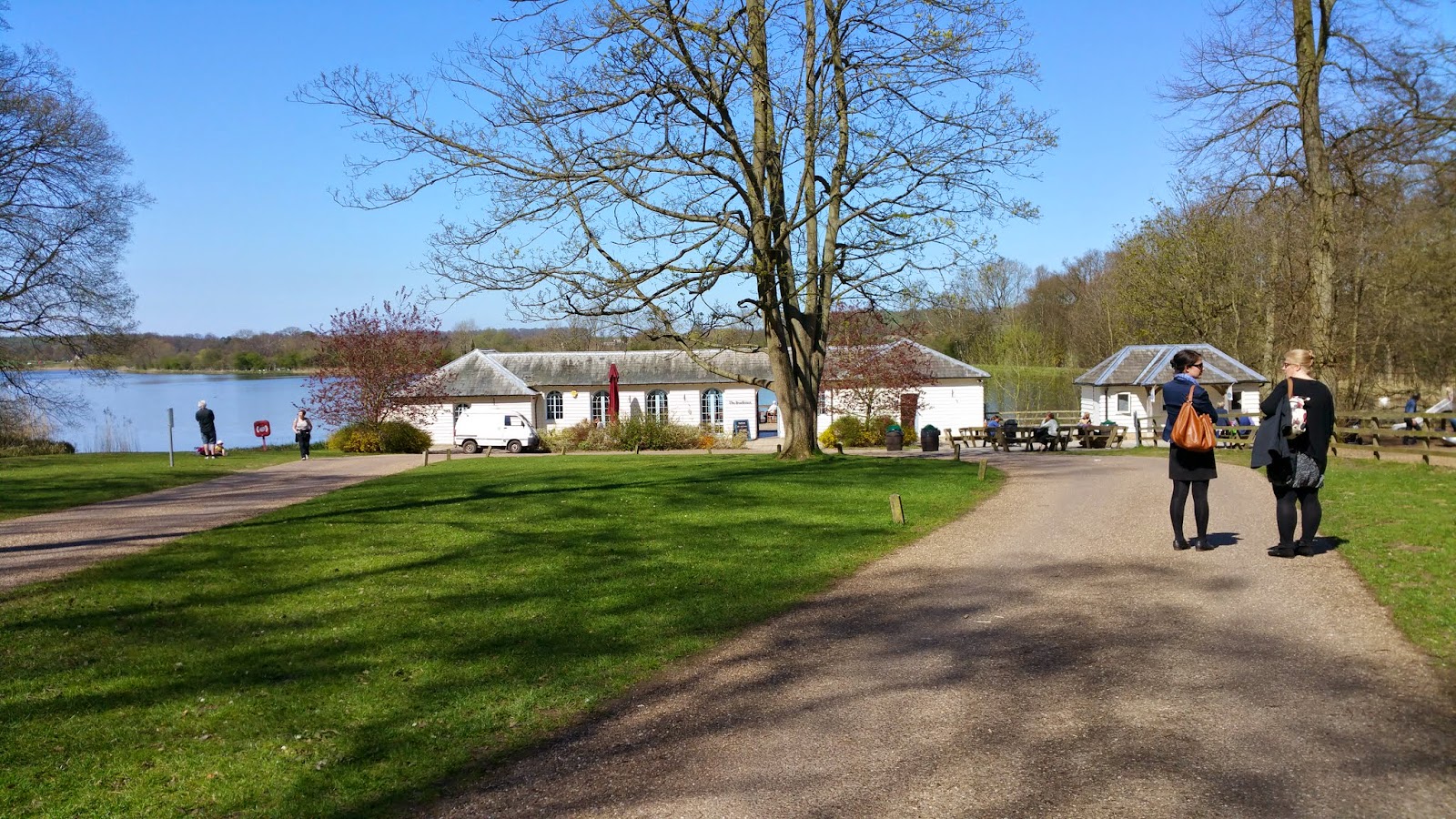 Leaving the house we slowly walked through the woods down to the large lake where we purchased some hot soup that we enjoyed while we sat on the dock and watch the beautiful swans on the lake.  From there we caught the trolly back to the Visitor's Center.   Back out on the road, we set Daisy with the address of our hotel for the night.  We're staying in Malton, a very small village not far from Castle Howard.  We are in a Pub and directly over the bar!  It you look at the photos our window opens right above the front door where there are tables for the smokers!   But, since dark it's been rather quiet except for the church bells across the street. 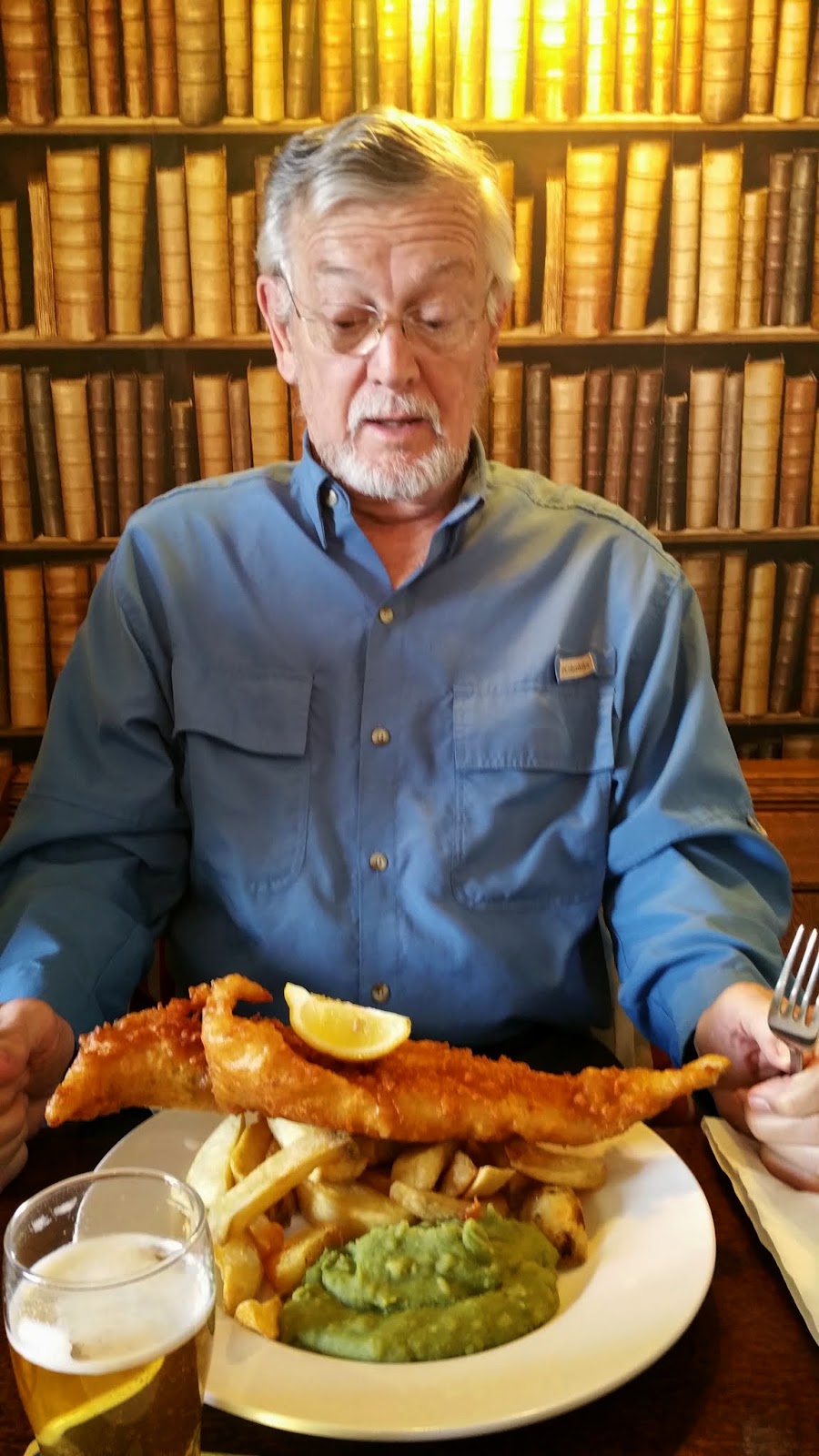 We enjoyed a Fish n Chip Dinner down in the bar after a short walk down the street to see a bit of the town before calling it a night.  There is even a red telephone box on one corner.  The building next to the pub has a beautiful thatched roof.  We actually played a game of Hand & Foot this evening...sitting on our beds with a stool between us.

Tomorrow we head further north and then on Thursday start south again.   Thanks for sharing our journey.

Thank you for your lovely writing and photographs chronicling what you are doing and seeing in this part of England I have not yet visited. I hope your experiencing of your travelling is as fascinating as your posts, Leslie P.S. Is the lake on the Castle Howard grounds swimmable (by humans) in the summer?

Leslie...I so enjoy finding your comments...it makes the long hours worthwhile. The lake looks rather shallow but they do talk about boat races and someone having to be rescued because he didn't know how to swim?? But, they also talk about the lake having gone to mud when it was maintained for several years. Probably swimming is possible out in the center of the lake...it is rather large. Hard to believe that we'll be in Paris this time next week!

Hi, enjoying the posts and pix, even though I haven't been commenting.. The English countryside is so beautiful and historic, love the tranquility after London's bustle.

Jim looks like he is enjoying that gigantic piece of fish and big pile of mushy peas!

Aren't the new GPS devices wonderful - even speed trap warnings! Guess it is time to update my old Garmin.