Enjoying the Gardens of Florence

Hope you found the night time photos that we took and posted last night to yesterday's blog.  Not as great as I'd liked but the ones of the churches are especially good.   They're at the end of yesterday's photos. 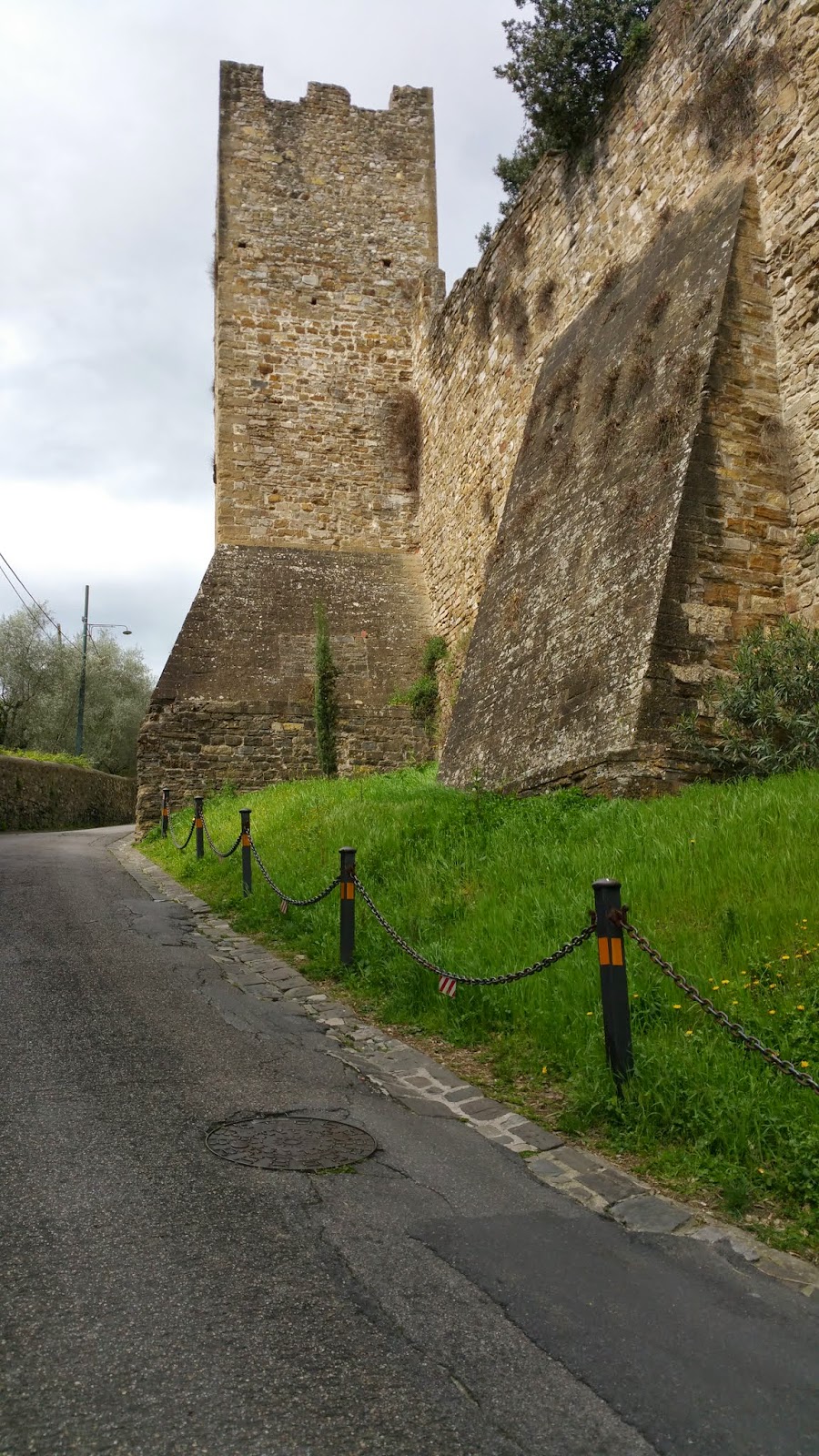 Today we walked 7.64 miles by the time we called it a day.  I started the day with a walk to the store about ten o'clock while Jim researched the planned activities for the day.  We had Lorenzo, the landlord, coming at one o'clock for the used linens so it cut our day in half.  After I returned we bundled up....yes, it's still cold outside....and headed through the portal at the end of our block, took a sharp right and headed uphill along the narrow road at the base of the old city wall that runs from the ancient tower at the far end of our street all the way to the Fort Belvedere.  Most of the road is a steady uphill climb which we did without stopping.  On the other side of the wall were the gardens that we visited in the afternoon.  We arrived home shortly before Lorenzo arrived.

We had a good visit with Lorenzo about his plans and how his new rental unit is progressing.  He has three of them and this will be his fourth.  He says he'd like to move back to England soon so that his seven year old son can experience life there for a while.  Nice man and a hard worker. 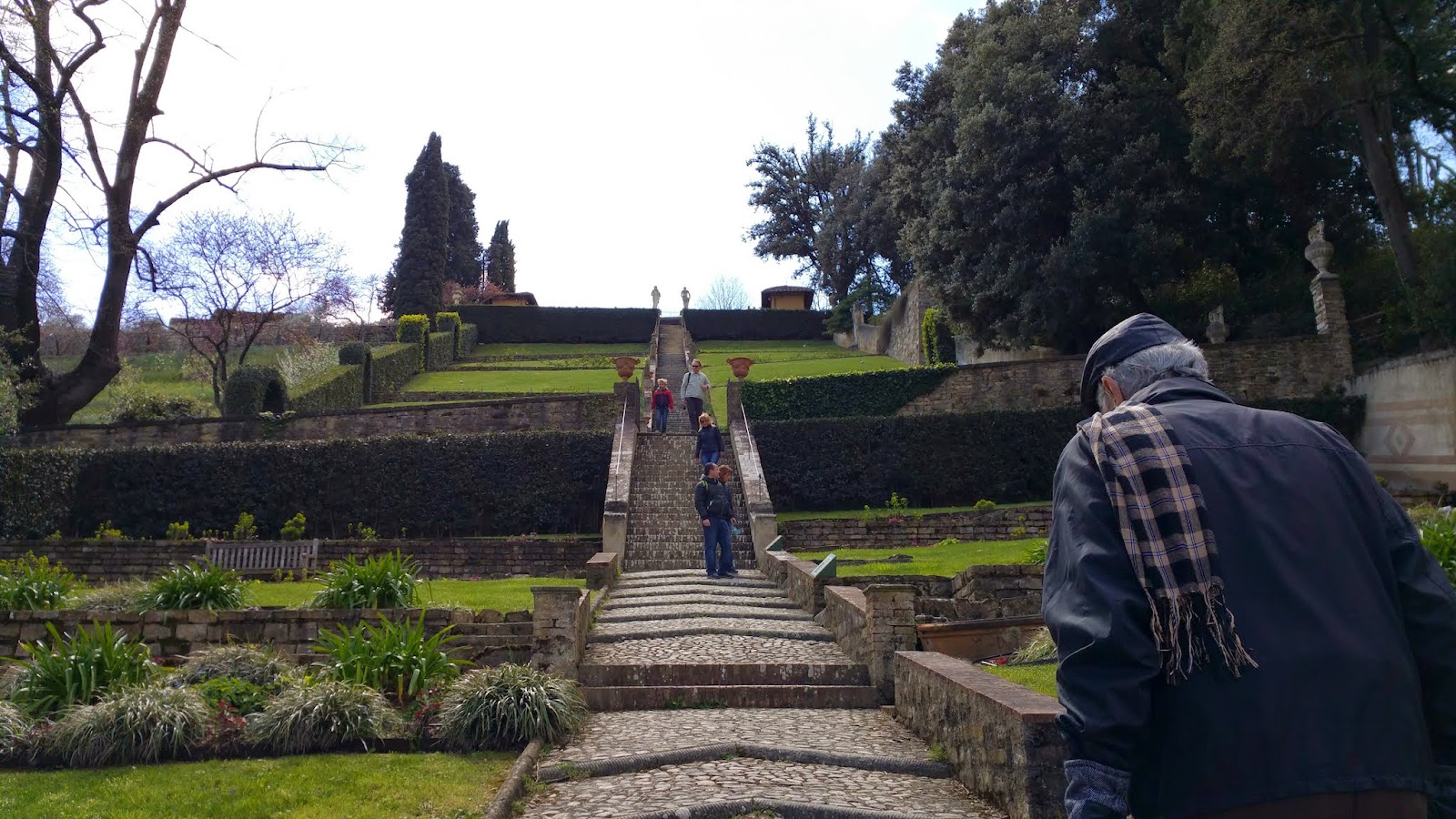 About one thirty we headed back out and walked down San Niccolo towards the Ponte Vecchio until we reached the entrance to the Bardini Gardens.  The ticket we purchased included this garden and the Boboli Gardens of the Pitti Palace.  Also several small museums.   Unfortunately the flowers are not yet in bloom...only the trees.  But the Italian Garden plans are beautiful with lots of steps and statues to gaze at as we walked through the gardens.  It was uphill all the way through the Bardini Gardens and then we exited near the top of the hill, walked a short distance to the entrance to Fort Belvedere where we'd been this morning. 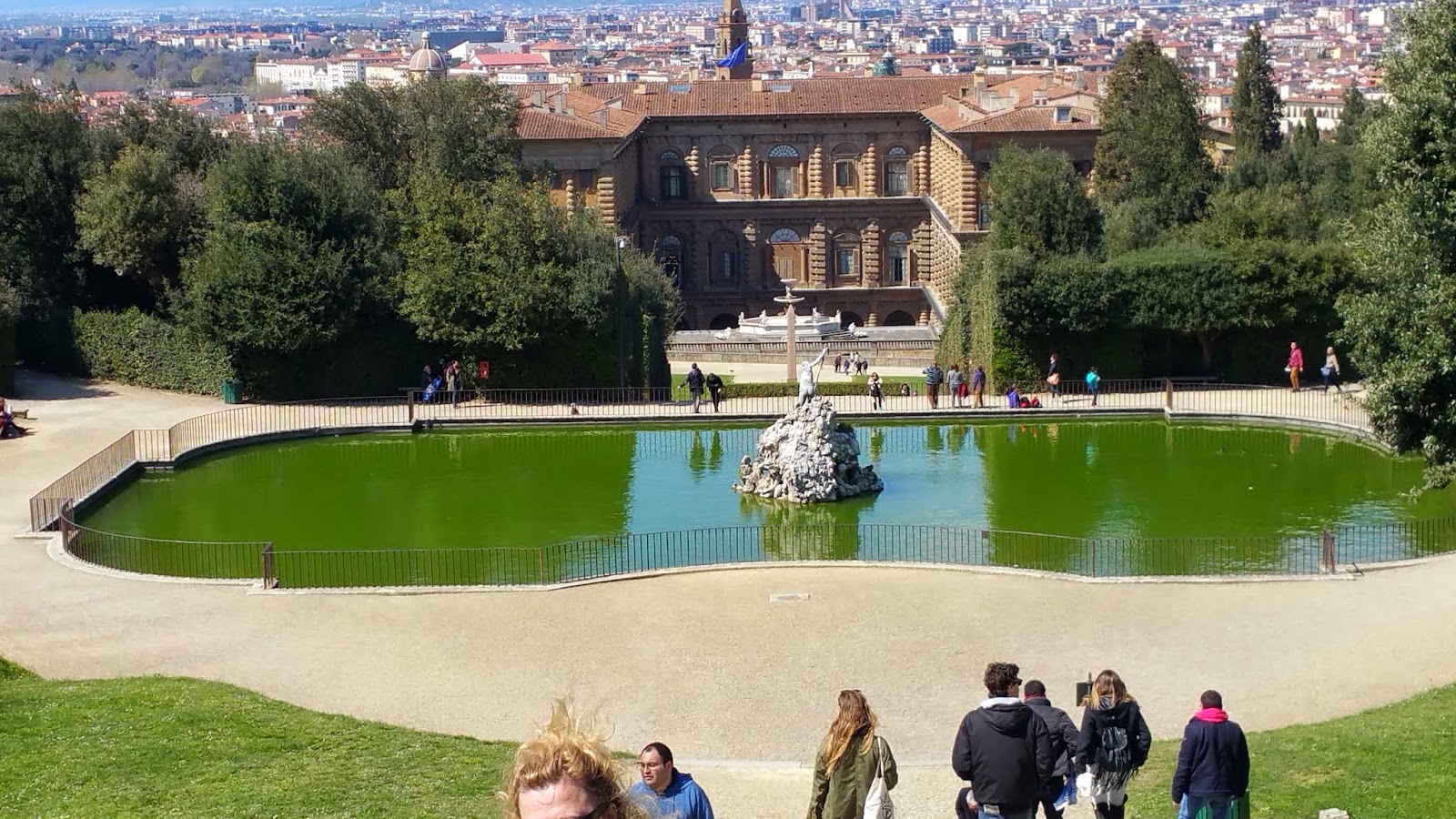 Walking around the edge of the Fort took us to the entrance to the Boboli Gardens at the top with magnificient views of the city and the Pitti Palace, the home of the Medici Family, and now a wonderful museum that we've visited several times before.  But, we'd not done the gardens on those visits so this was a real treat. 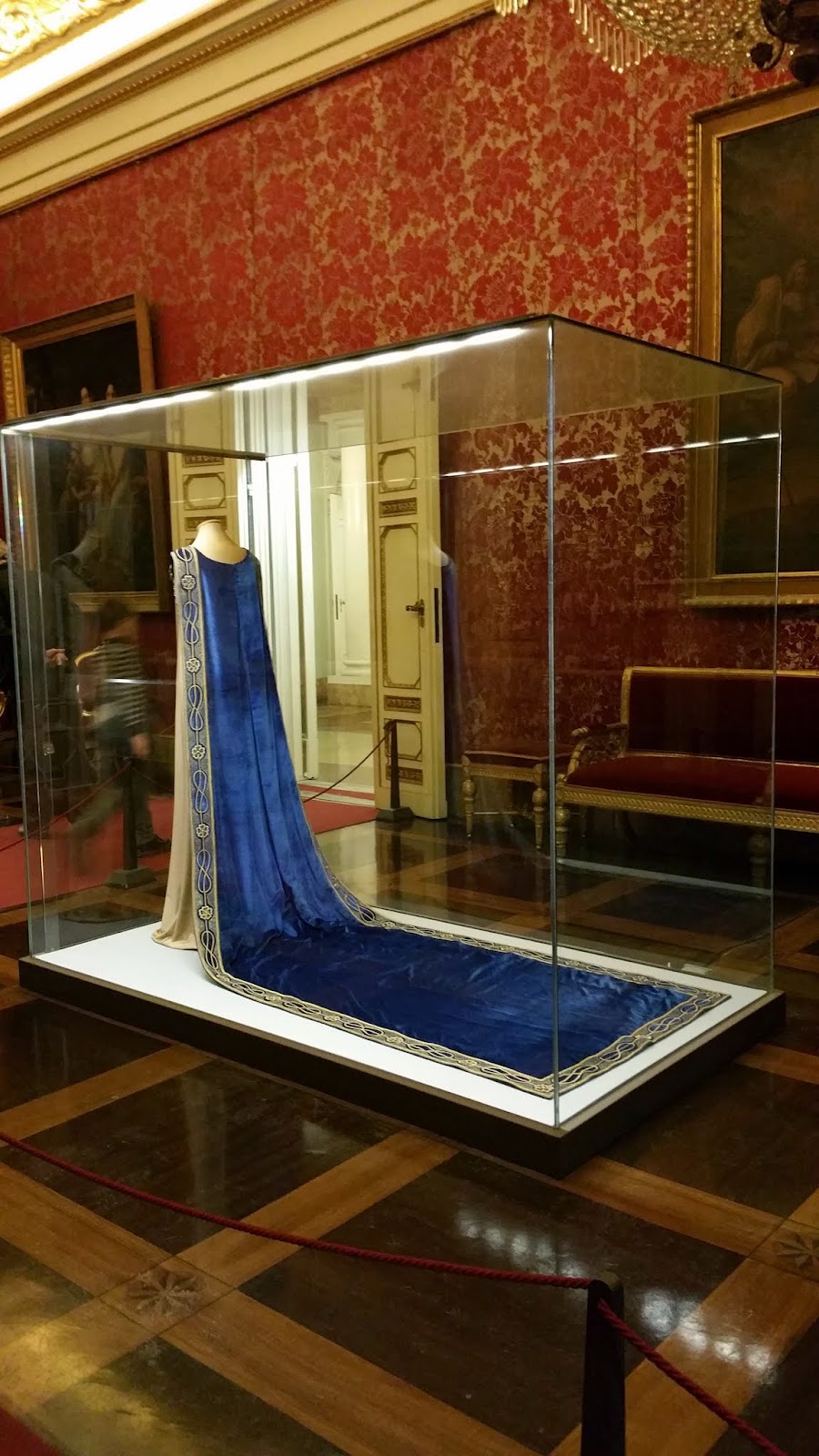 We meandered through the hedge lined walking paths until we finally reached the palace.  There we went inside for a visit to a special exhibit on costumes that was included in our ticket.  These buildings are also part of the palace but you needed another ticket to enter the area where the art is displayed in the main part of the palace.

We wanted to visit the grotto before leaving so slipped out the entrance to walk around the back of the palace to the far north end.  Along the way I told Jim where I'd sat that day in 2006 when I was in Florence with my daughter Jennifer, I'd gotten ill that afternoon when we were at the top of the bell tower of the Duomo and elected not to do the gardens with her.  I'd found a spot up against the wall and read my book while she raced through the Boboli Gardens by herself that day so long ago. 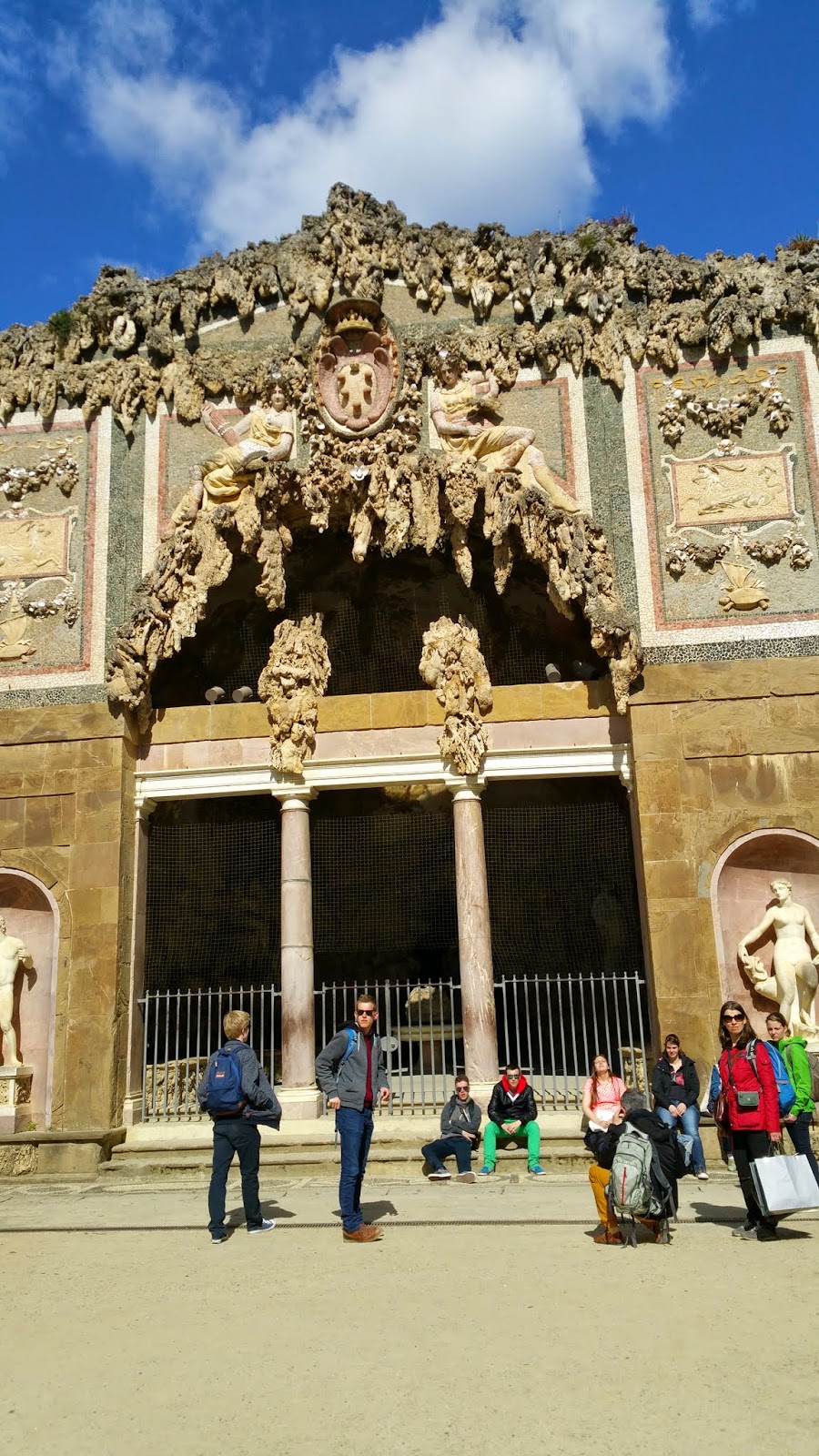 Soon we were at the grotto and I blindly snapped photos with a black screen because of the bright sunlight; but, after reviewing them tonight I was very pleased with the photos of the fresco on the walls.
There was a group of American Students sketching at the Grotto when we arrived.  Soon we were out the gate and walking towards the apartment.  It was four o'clock when we arrived home.  Time for a game of cards before dinner.  Nice evening...but we did hear a helicopter flying over and over and over the city for more than an hour.  Wonder if we'll ever know what the problem was about.

This is just gorgeous !*love* it all as the messages, the pictures and the quality of the writing. Thanks !

Another wonderful day in Firenze, beautifully documented by you! I wonder who the naked man sitting on the turtle was, or what he was doing!
Thank you, Leslie

Leslie...my husband asked me to take the photo of the funny little naked man on the turtle. He said that he was a court jester and a favorite of Cosimo de Medici. His name was Braccio di Bartolo and he was a dwarf. An interesting story if you check the internet.