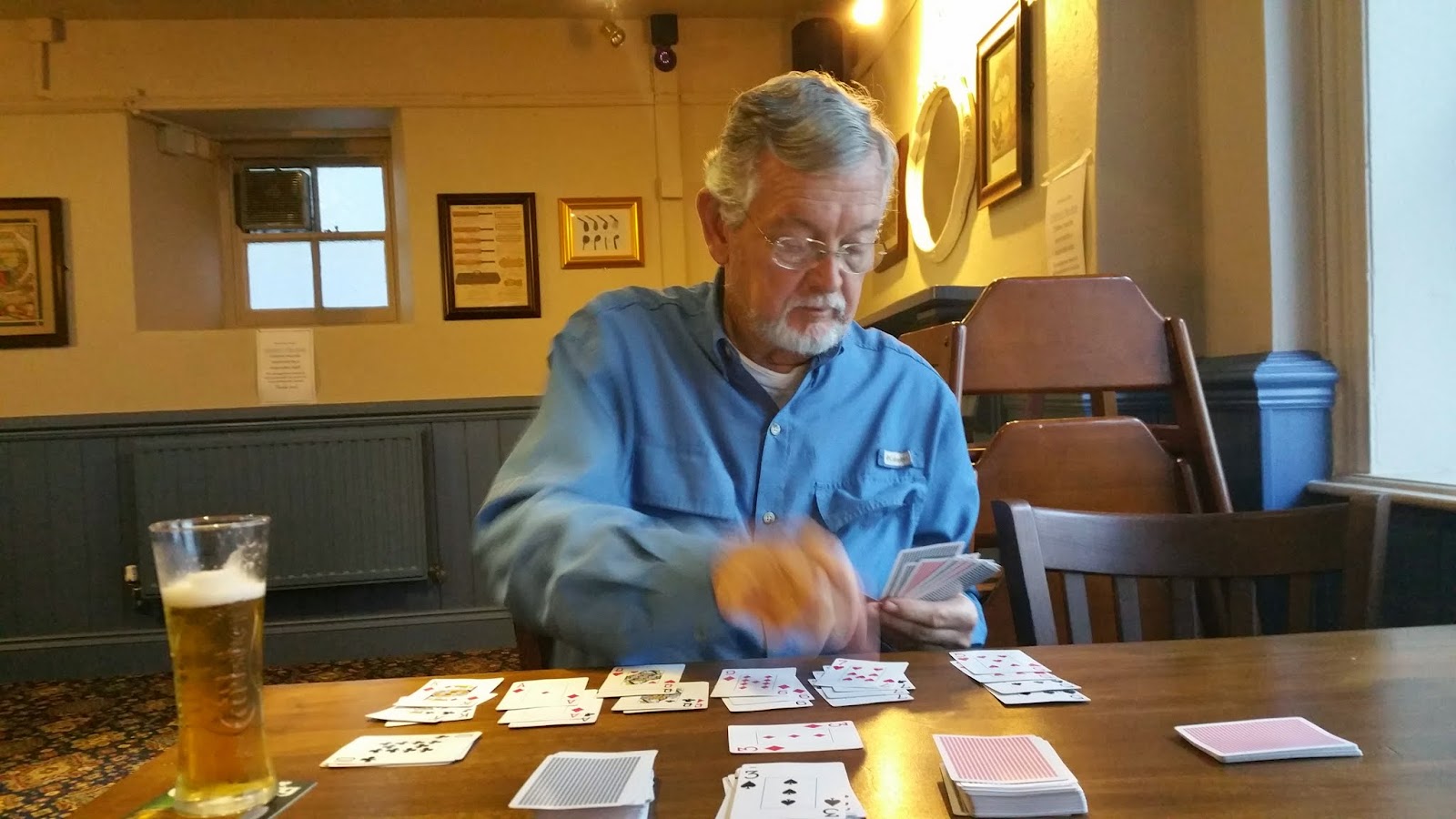 It's after nine o'clock in the evening on Friday and we've just returned to our rooms on the third floor; no elevator in this very old building.  Yes, we're in the Swan Hotel over the Pub and have  been sitting in the Pub having a beer and playing a game of Hand & Foot.  We had several people stop to ask about what game we were playing.  None of them recognized our game!   Yes...Jim squeaked out another victory again this evening. 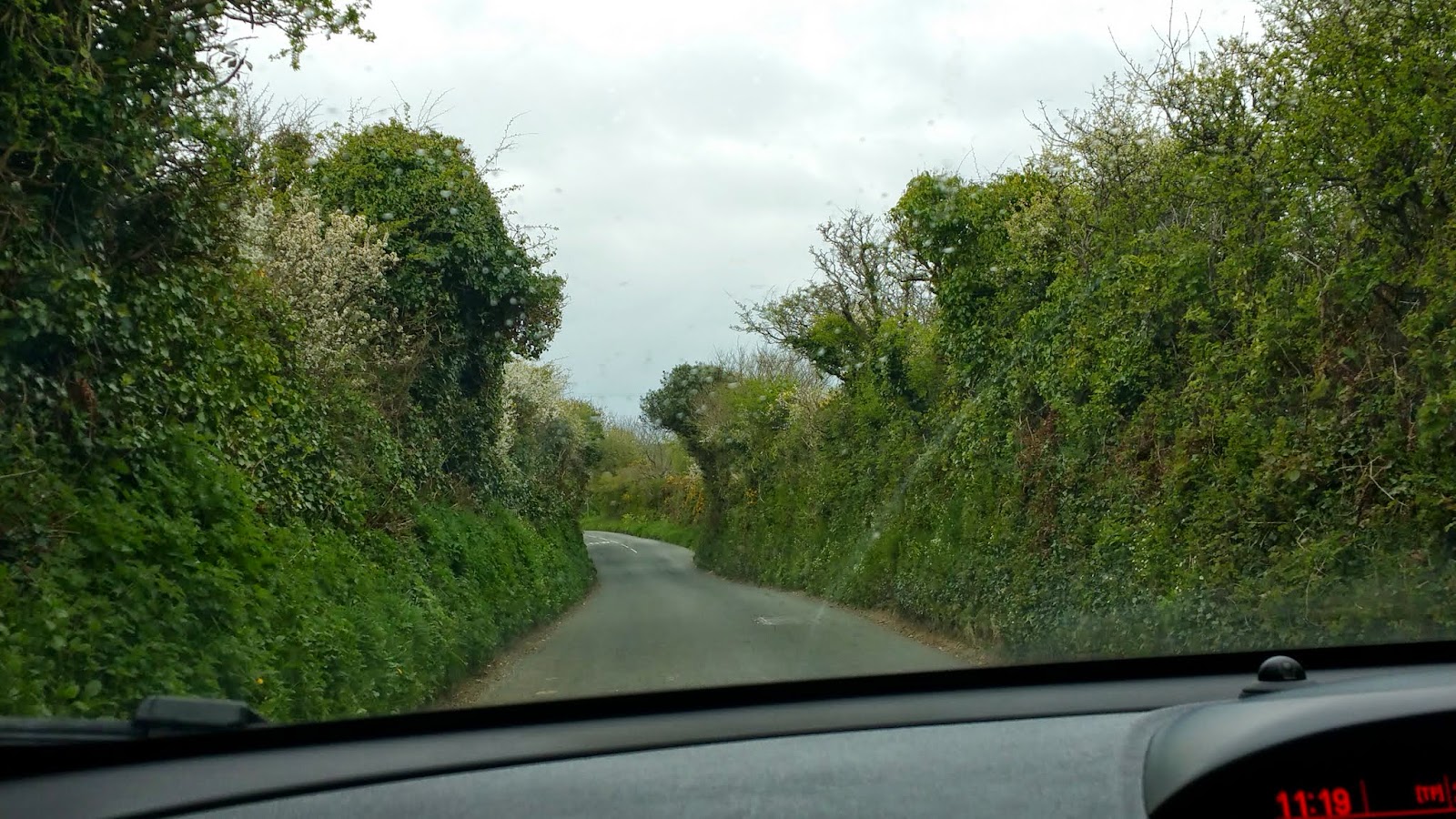 This was a fun day full of surprises and crazy narrow roads.  We had the M5 all the way south from Bristol until Exeter and then a fairly decent road to Launceston; after that the roads were very narrow, twisting, steep and crazy!   But we made it to the coast of Cornwall in about three hours and found the ancient ruins of Tintagel Castle, rumored to be used by King Arthur and the Knights of the Round Table based on myth and legend.  Much of the story comes from the tales of Lord Alfred Tennyson. 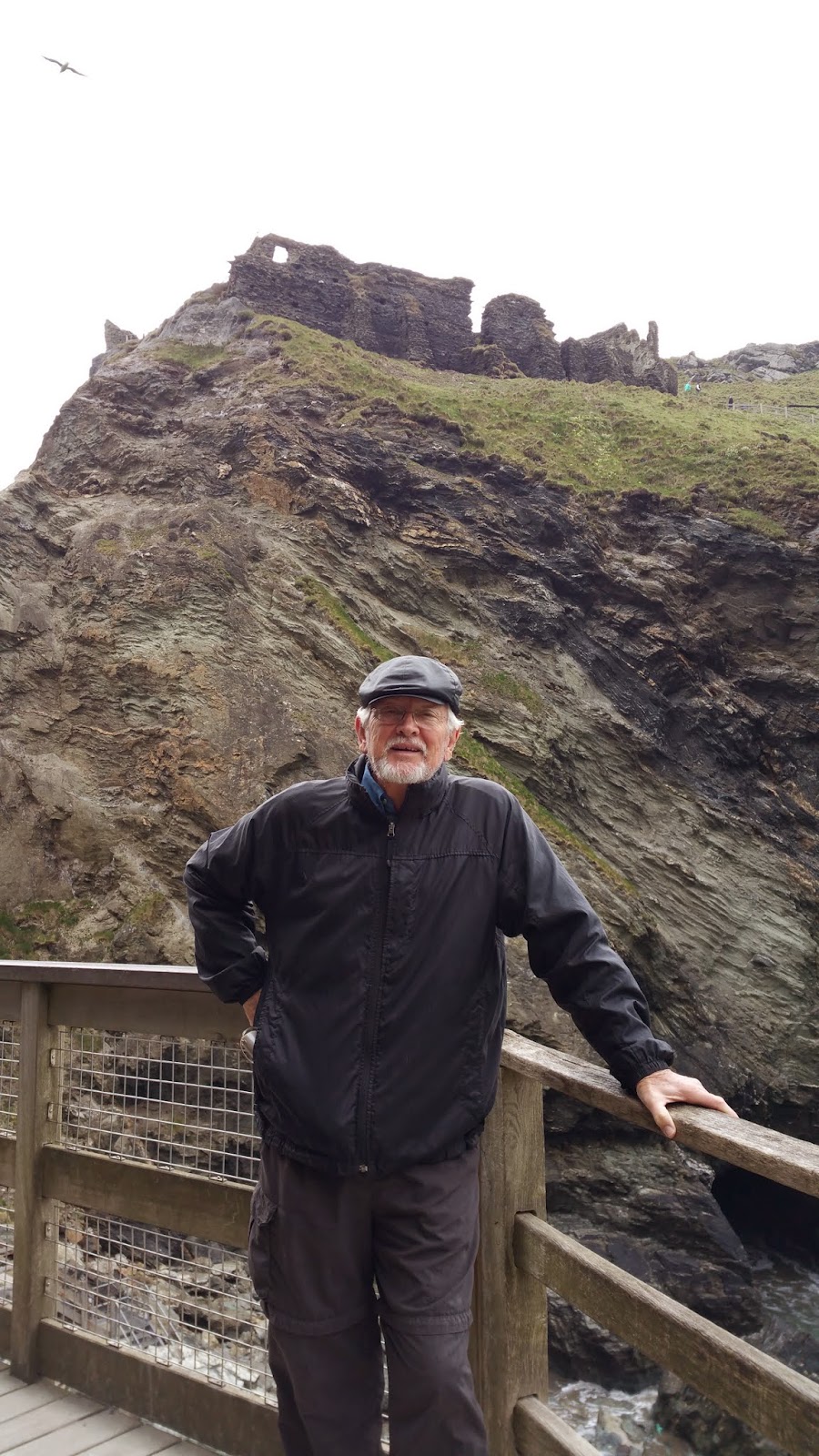 It was a long walk down a steep incline to the edge of the Atlantic Ocean for a view of the ruins high on the top of the hill.  It is another long walk from the entrance of the Visitor's Center up to the top of the hill where the ruins are located.  We decided to fore go that portion of the walk and took our photos from below near the edge of the water.   There is one close up that I took of a postcard up in the village for you.   Then we turned around for the long walk back to the car in the lot at the top of the cliff.  The whole project is undergoing extensive work right now to make it an easier site with more amenities for the visitors.

Once we arrived at the car we programed Daisy for what we hoped was an easier trip to Port Isaac since they are both on the coast.  We headed further south and found that we were being taken back on the tiny roads because of the lay of the land and the inlets of the ocean.   We only had nine miles to drive between them but it took us half an hour to negotiate the roads. 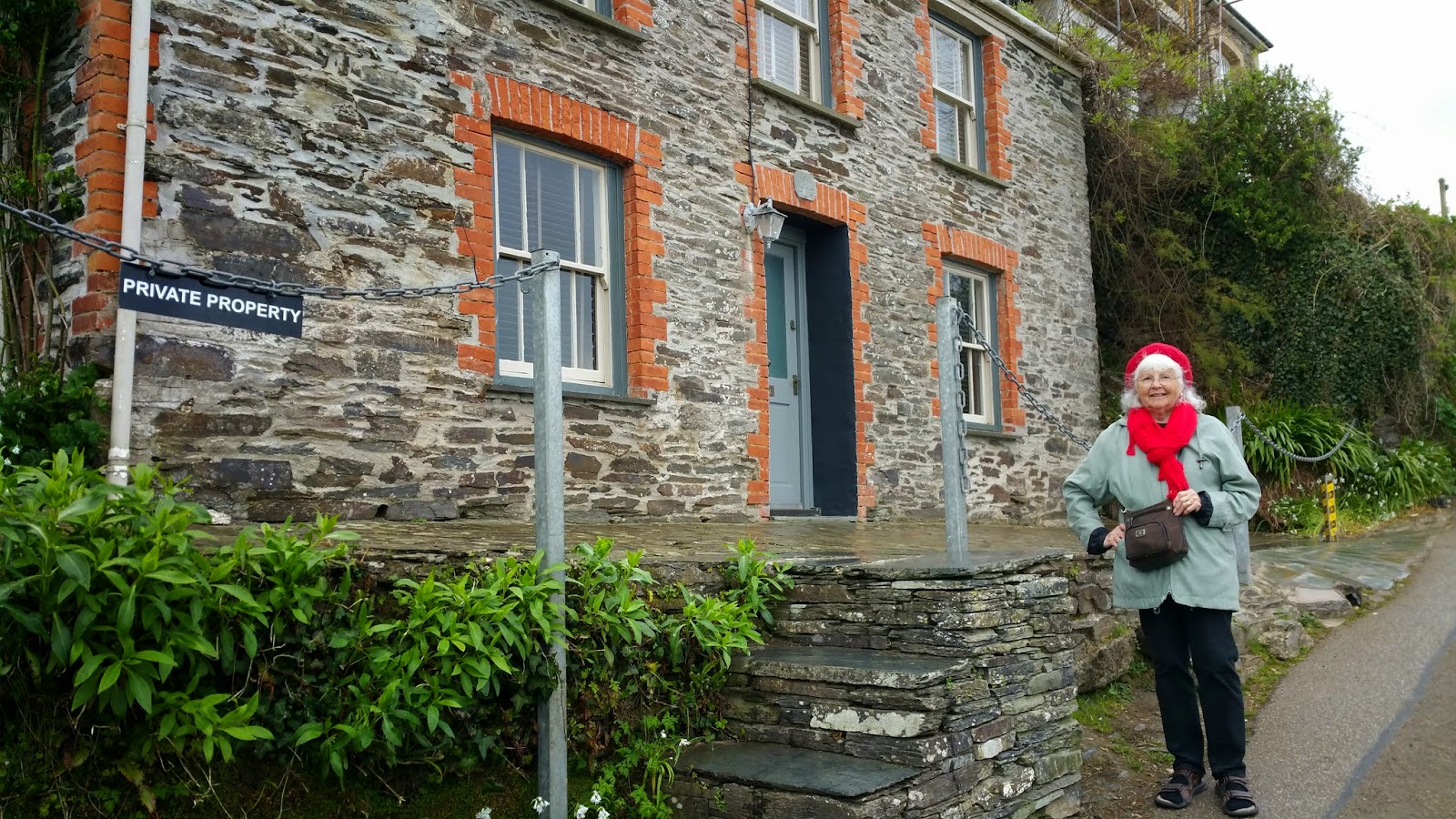 Again we had to park at the top of the hill and walk into the village on the narrow roads that lead down to the mouth of the bay that has become so famous because of the television program called "Doc Martin" on the BBC Network.  The village is called Port Wenn on the show; but we found all of the important homes that are used in the program before we again walked back up to the top of the cliff and our car.  It was just after two o'clock by this time. 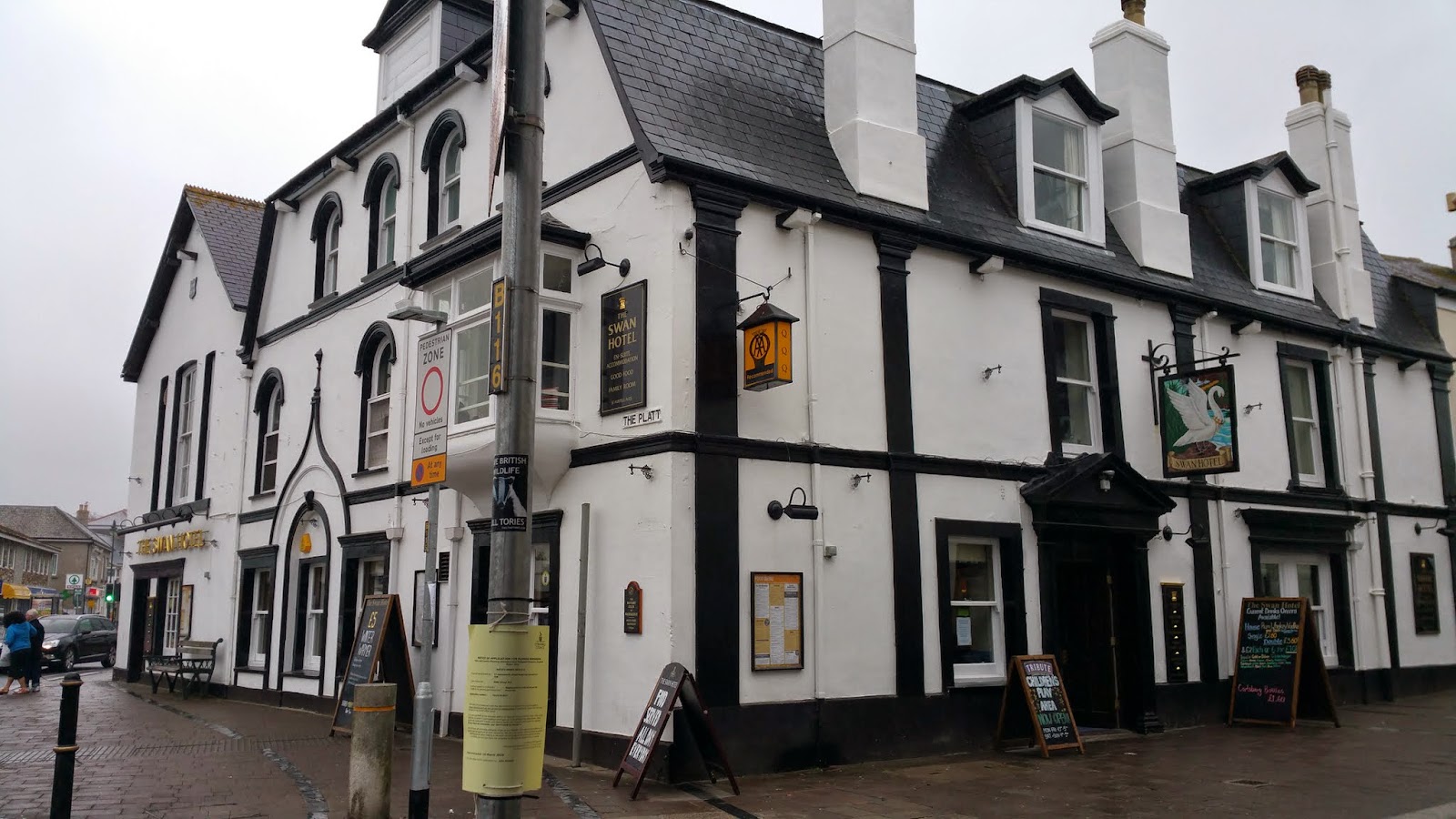 We decided to ignore Daisy and follow the signs directing us to Wadebridge and our hotel as long as they were on roads that had at least the width of two cars; no matter how long it took us to get there.  We'd had enough of the shortcuts that Daisy found for our journey.  By half past two we were registering at our hotel that we'd booked through Expedia months ago on the Internet.  It's a wonderful old Pub/Hotel that has been here for hundreds of years.  Half timbered on the outside and rooms that have been modernized for the convenience of the guests.   No elevator but the staff happily carried both of our large suitcases up to the third floor for us.  We're taking tomorrow off to do some laundry and other housekeeping items to prepare for our trip to Paris on Tuesday.  And, the weatherman says that even though you all said your prayers; we're going to see rain tomorrow and maybe on Sunday when we head east for our last two nights on the road.   Thanks for joining us on our journey today.