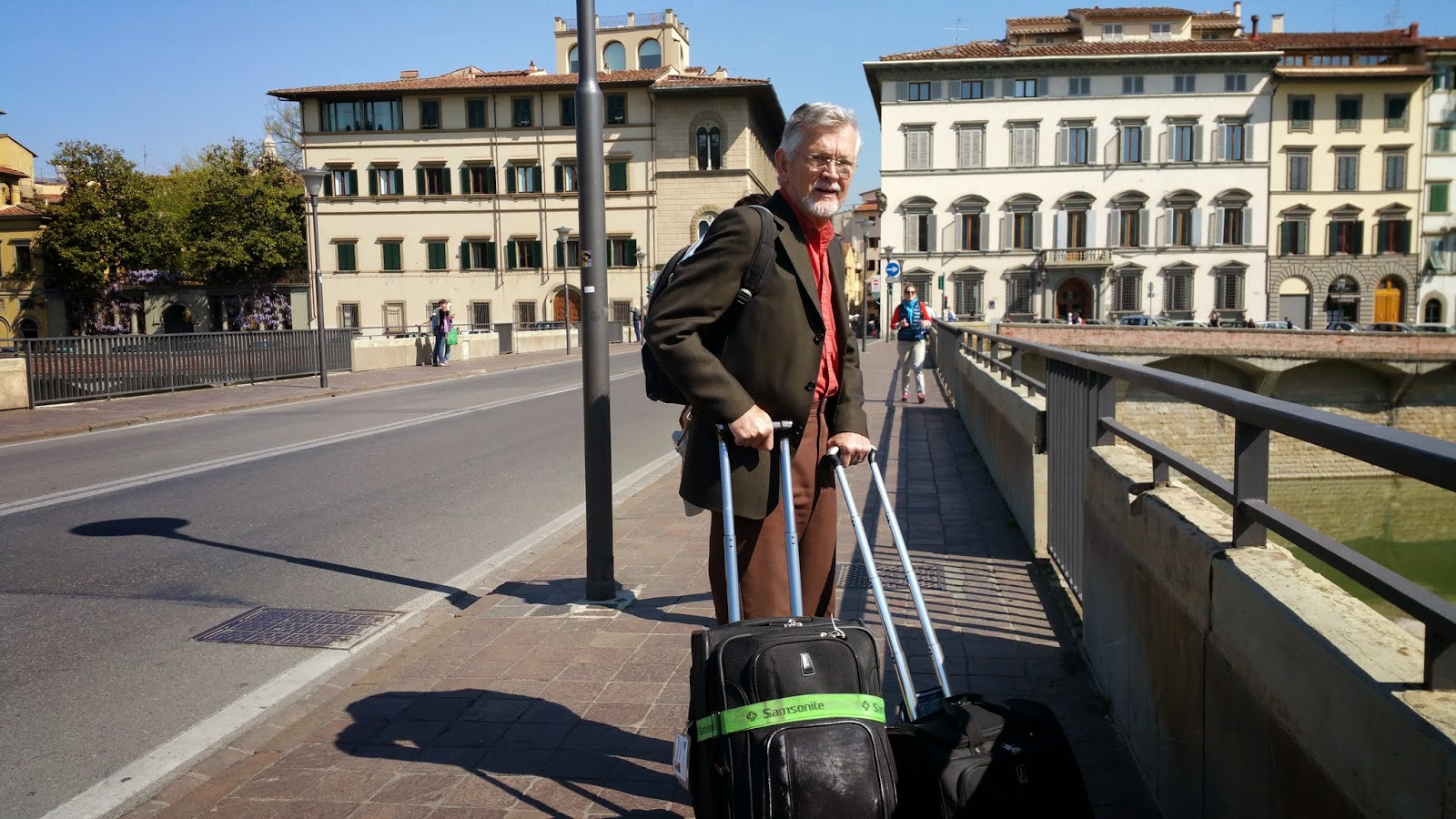 Yesterday was a long day that started slowly and ended on a good note after hours of problems.  But, traveling on your own gives you lots of opportunities to solve problems.   We left our apartment in Florence about eleven o'clock, walked the half mile to the taxi stand where we caught a ride to the airport.  We had to be out of our apartment and with all of our luggage....yes...we need to travel lighter....we decided to spend several hours at the airport with our luggage instead of dragging it around the city.

We were flying on Vueling Airlines, a Spanish version of Southwest.  Good service and great flight.  We lost an hour on the clock as England is an hour behind the continent.  We left Italy at 4:25 and arrived in England at 5:45 pm....but it was a two hour flight.  I'd purchased tickets for the Gatwick Express train from Gatwick Airport to Victoria Station in downtown London.  That was perfect and we patted ourselves on the back for that one has we passed the Que lines for people purchasing their ticket.   Before getting on the train we used an ATM to purchase some English Pounds...ouch...the value of the pound is about 1.5 to the dollar.

Slow ride into London; problems on the track said the conductor resulting in reduced speed.  Arrived in Victoria Station.  Went to purchase our train ticket to the suburbs and discovered I should have been in the line to purchase an Oyster Pass but since I didn't want to wait again we paid for the one way ticket to Tooting Broadway.   We'll address that problem tomorrow.   By now it was after seven o'clock.  Thank goodness we'd gotten a sandwich in the airport before we boarded the plane.
First the Victoria Line to Stockwell and then the Northern Line to Tooting Broadway.   We were able to contact the landlord at that point and she said to catch the bus 127 and the apartment was directly across the street.

We found the bus stop but when I asked someone about purchasing the ticket on the bus she said "no, I'd have to purchase it before" and gave me directions to a tabacco shop across the street.  When I went in he asked for my Oyster Card, I said I only wanted a bus ticket...he didn't sell bus tickets.   We discovered that without the Oyster Card your options are very limited.  So I spent the five pounds for the each card and added money to them.  Back to Jim who was standing with the luggage as it was getting darker and darker.  We waited and waited but no Bus 127 came.   Suddenly there was a bus 333 and I showed Jim on my directions that this bus was another way but would entail a five minute walk.  We climbed on board.  After a while I went up to the driver asking for help.  He was as lost as we were as to where we should get off.

Long story short, it was after eight o'clock and we were on a strange street in one of the more ethically diverse neighborhoods we've been in.  But, the people were wonderful and really did try to help us; several going out of their way to lead us in the direction they thought we should go.  It was getting cold and we were both tired.  I called the landlord again and she said, "oh no...you're on Streatham High Road instead of Streatram Road"  She was trying to tell us how to get to her place when I finally asked her to please call a taxi to pick us up and bring us to the apartment.  At this point I would have paid any price they wanted to charge. 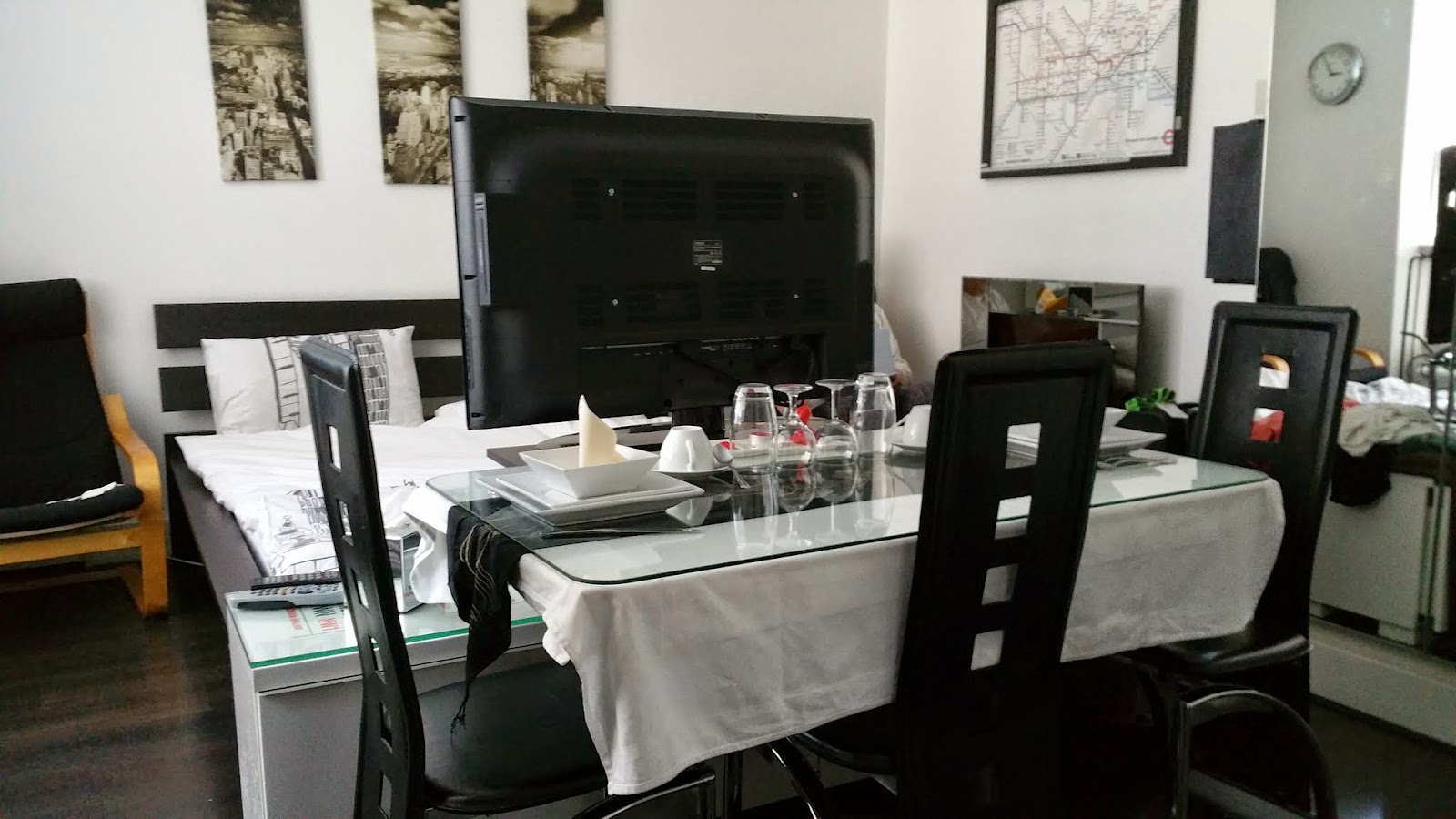 We waited and waited with narry a taxi in sight.  Suddenly one appeared and Jim hailed him down.    We didn't even ask the cost just gave him the card with the address.  I thought it was the one that the owner had called for us....but when we received a call over half an hour later from the one she'd called; we knew that someone was watching out for us to send the taxi we used.   We were thrilled to pay him ten pounds for the ride; and there is no way we could have possibly walked it with the luggage at night.  It was nine o'clock by the time we were in our apartment.  Fortunately the supermarket below us is open until eleven o'clock so we did a bit of shopping before calling it a day.  Darling apartment but definitely in the suburbs.   Our windows face the backyard so we don't have any street noise. 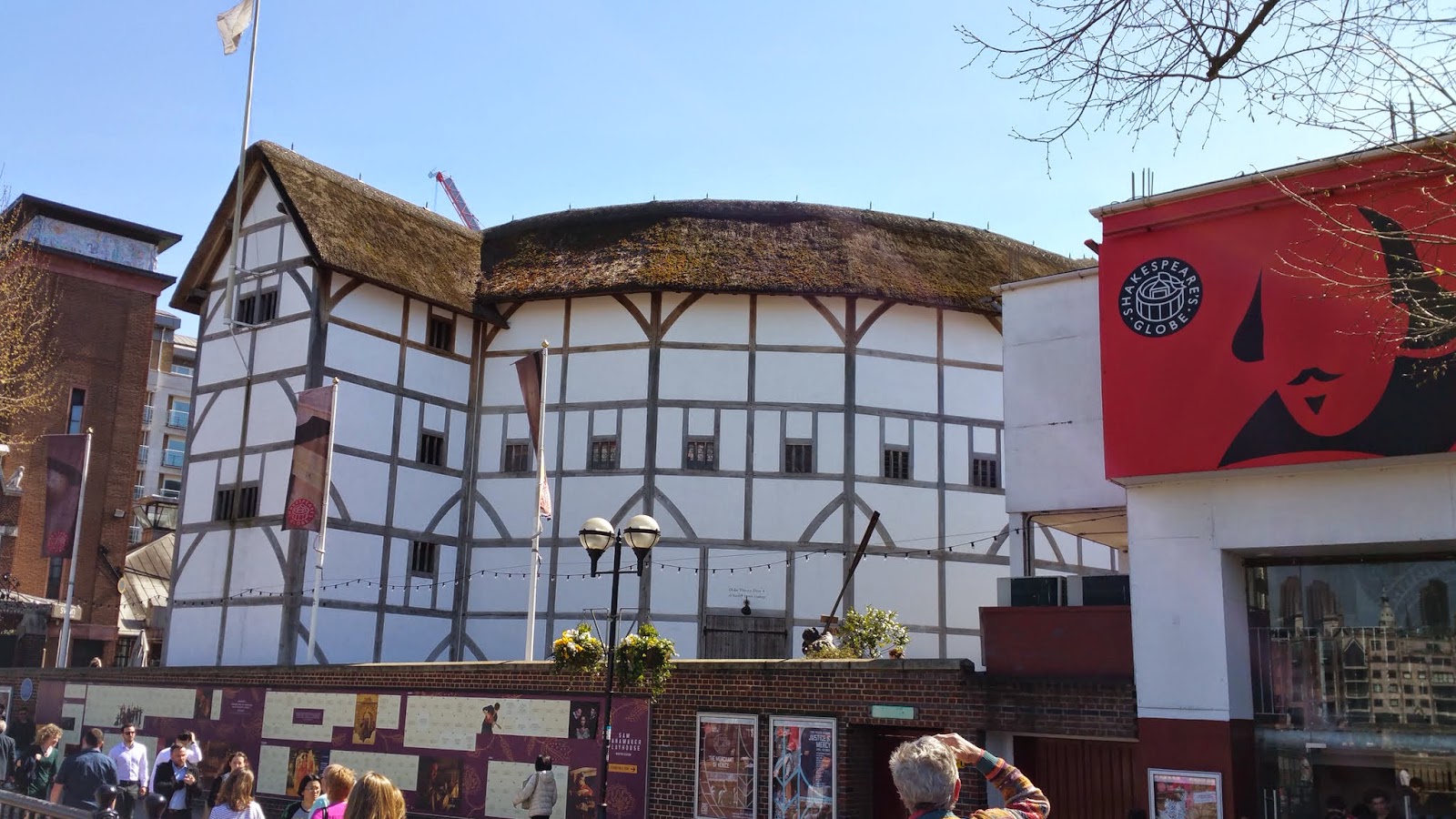 We slept late this morning and enjoyed a leisurely morning before heading out the door about noon.  We easily found our way back into the city and exited the Underground at Westminster.  Walked out into warm sunshine and Big Ben.  We walked the Queen's River Walk pass the London Eye, the lines were long and it is very expensive for something I've done before.  We walked all the way to Shakespeare's Globe Theater.  A recreation of the original as best as they could do.  We had a wonderful tour guide by the name of Jeremy who was easy to understand, extremely knowledgeable and entertained along the way.    He even quoted parts of Shakespeare's plays to emphasis the information about the plays and how they related to the building and people at the time they were written.  This theater is a direct result of the work of an American actor by the name of Sam Wanamaker who believed that it was important to have this built and worked most of his life to make it happen.  He died in 1993 and this opened in 1997.   A new theater in the complex has just been completed and is named The Sam Wanamaker Playhouse.  Totally enclosed they give performances here during the months that the original is closed because of weather. 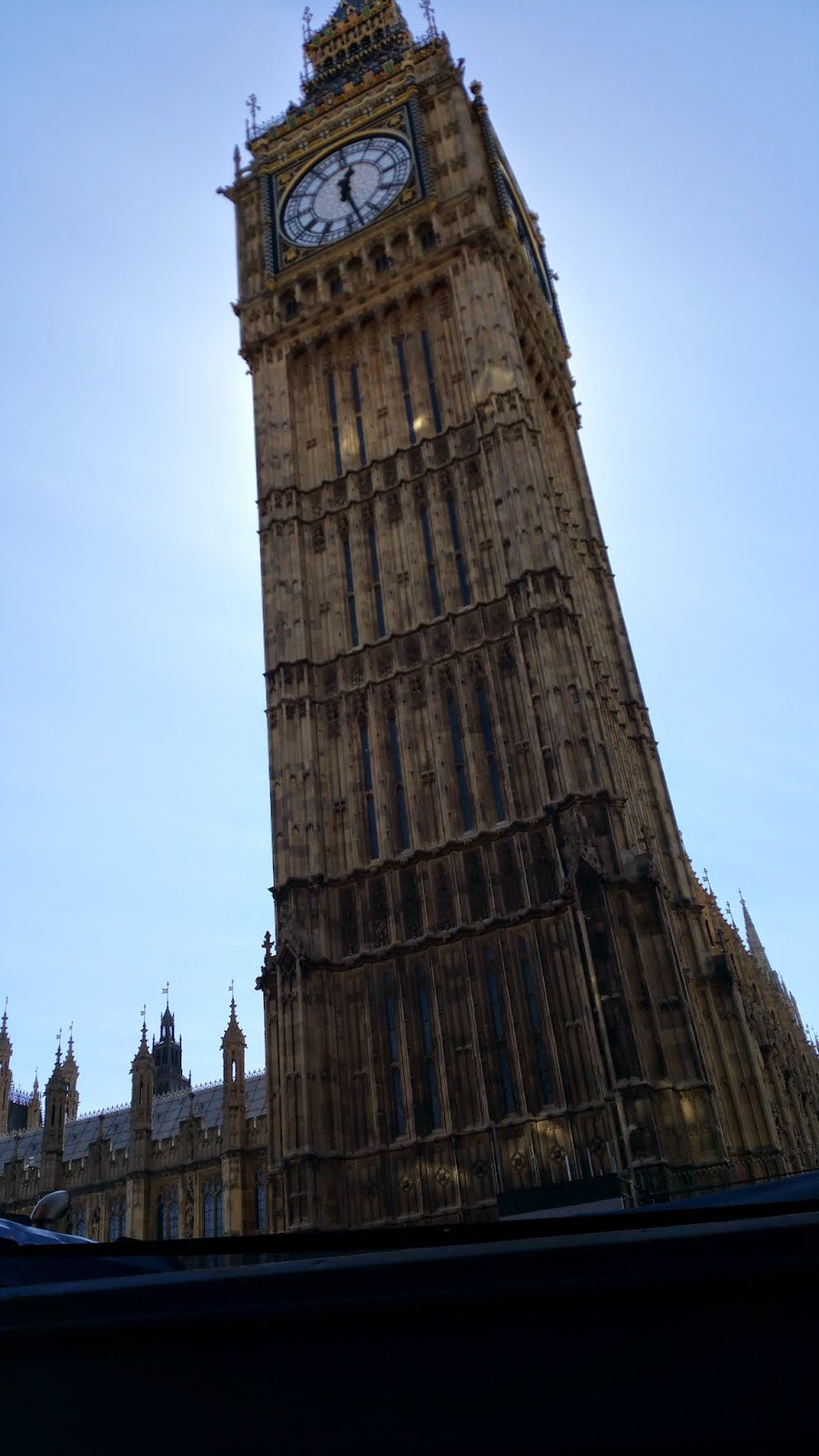 We walked back towards the Modern Tate Museum and Jim enjoyed over an hour there while I enjoyed people watching as I sat across from St. Paul's Cathedral on the Queen's River Walk.  Then we went into the very new Blackfriars Station to catch our transportation towards home.  It was now after four o'clock in the afternoon.  When we departed the Tube at Tooting Broadway we decided to get an early dinner.  We selected J.J. Moons, it looked like a bar from the outside but the sign said that they had fish n chips and served meals all day long.

We had a wonderful dinner and even had an elderly gentlemen from the neighborhood join us at our table.  Not uncommon in Europe to share table space.  He was definitely a local and we could not lure him into conversation of any length. 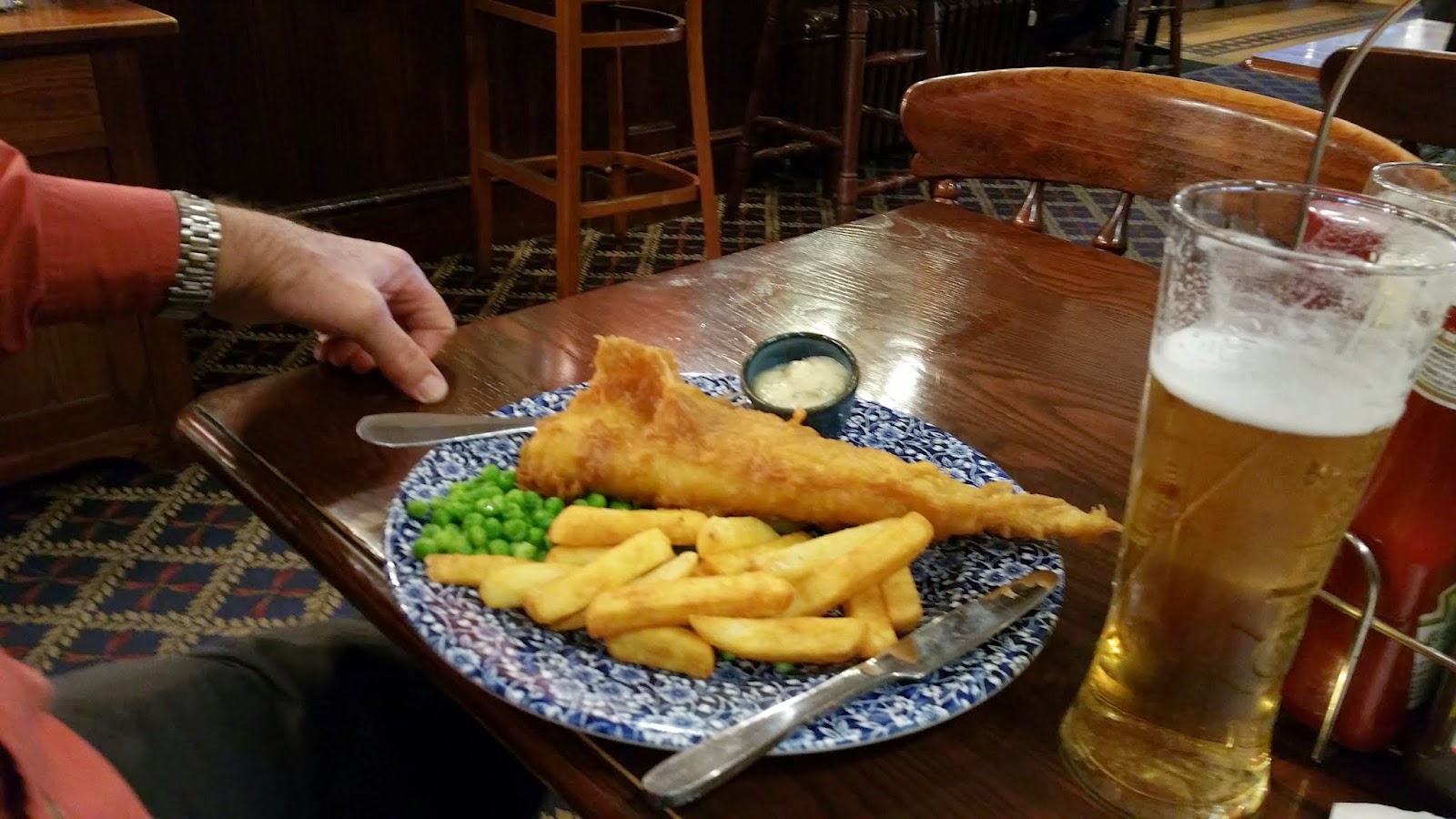 Ate a full meal including a huge glass of beer for only 6.25 English Pounds each; their earlybird special.  We walked to the stop for Bus # 127....yes, the one we should have caught last night, and it took us right to the apartment.  We only had to walk across the street.   We walked in the door at six o'clock and are enjoying our evening with a huge television with English Language!

Hope you've enjoyed our tale of woe that had a happy ending and a moral to the story:  take a taxi from the train station when you're arrived in a strange place!

In the 1970's, when I was crew for Pan Am, I used to fly from the West Coast of the U.S. to London, spend about 36 hours in London, then fly back, almost every week. A lot has changed in London since then, particularly the "new" emphasis on the riverfront. Time for another visit, but thank you for this post in the meantime!