January 1st, 2014:  A quiet day spent inside the apartment.  Jim has a sore throat and needed a day of rest; much like I needed one last week when I had indigestion problems.   It was a good day for reading and catching up on bookkeeping.   We'd shopped for supplies earlier in the week and had no real reason to go out into the overcast day.  Unfortunately, we didn't have the Rose Parade to entertain us or the multitude of football games that are available in the USA on this first day of the new year. 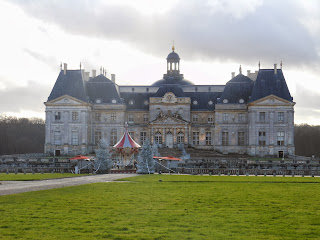 January 2nd brought sunshine but predictions of rain.  We dressed warmly, prepared for rain, and then headed to the Metro System for a long ride with five changes of routes for the shortest way to the Gare de Lyon.  Today we're catching the train to the town of Melun located just fifty km south and a bit to the east of Paris.

We'd read in various Internet sites that it could take us from half an hour up to nearly three hours for the trip by train.  Buying our tickets for the round trip from the machine was easy enough.  Then we found the track and a train that ended at Melun.  What we didn't think about was the fact that we were catching the "milk run" that stopped at every station.  We had a nearly empty car that left Paris at ten o'clock; enjoyed the countryside as we slowly moved from station to station and in an hour we'd arrive at Melun.  Walked outside and easily found the Taxi Que. 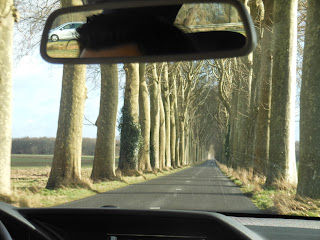 Rick Steves said that a taxi should cost twenty euros each way; I asked and he said eighteen so we climbed in and enjoyed the fifteen minute ride out into the countryside to the Chateau de Vaux Le Vicomte.   We've been to this Chateau four times over the past ten years so we were familiar with the area.  One of the features that makes this one so special is that it feels like you're going back into time as you drive down the long tree lined road to the entrance.  Today will be special as we're visiting to see the Christmas decorations and real fires in many of the fireplaces.   This special event takes place every December up to January 5th; then the Chateau closes for the rest of the winter months.

The sun was shining brightly as we left the taxi; we'd asked about the return trip and he'd given us a business card with a telephone number.  He said that a staff member at the Chateau would make the call for us when we were ready to return. 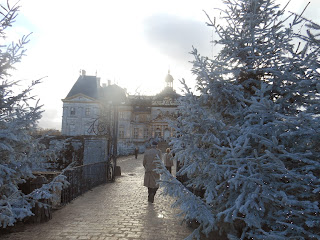 Jim was thrilled that we only paid "Senior Rate"; so often this is only for EU members.  Outside of the house they had a carousel for children and the path to the house was lined with pale blue Christmas trees lit with tiny LED white lights.  All of the lights were on in the gardens but difficult to see and photograph in the bright sunshine.  All of the ornamental trees shaped like three dimensional  triangles plus all the short hedges in the flower gardens were wrapped with red LED lights that flickered throughout the day.   We decided to view the Estate during the daylight hours so the view of the gardens wasn't all that spectacular but I loved the fact that the crowds did not arrive until we were leaving later in the afternoon.

We picked up audio headsets that described each of the rooms that we entered.  There were multiple Christmas trees in each room.  I know you'll enjoy the slideshow that features all of the different rooms and if you have access to Facebook, I've posted several videos of the decorations. 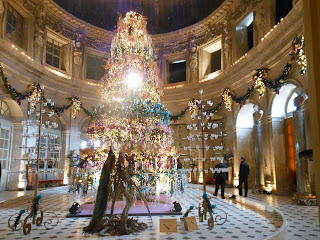 We spent nearly two hours inside of the Chateau and then wandered out into the gardens.  This Chateau is built in the middle of the formal gardens.  It is about a mile and a half from the front gate to the back of the gardens.  The Estate is 500 hectares which is 1,235 acres.   In 1641 a very young twenty-six year old man by the name of Nicolas Fouquet purchased three villages to make his Estate near the town of Melun.  From 1658 to 1661 he destroyed the villages and used the people who lived there to work on the estate, some eighteen thousand people.  The cost to build this was sixteen million french lire.  He hired Andre Le Notre to do the gardens, Le Vau to design the building and Le Brun to do the enteriors.  Together they produced a magnificent Baroque Country Home fit for a King.  In fact there are three rooms designed to be used by a King should he visit the estate and stay overnight; a common practice in those days.  But, these rooms were seldom used by Royalty but by the family members.  The rooms in this house were never slept in by Royalty. 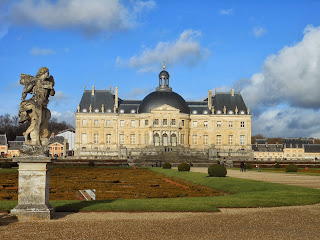 When finished, Forquet hosted a party for King Louie XIV at his new Chateau.  Forquet was Louie's Superintendent of Finances and a member of the Royal Court.  When Louie arrived he was amazed at the beauty of this Estate, but did not stay the night.  When he returned to his palace and told his court of the beauty of Vaux Le Vicomte; one of his ministers by the name of Colbert alluded to the fact that possibly Forquet was dipping into the King's financial treasure to finance his beautiful new home.

Forquet ended in prison, his estate and family ruined.  The King hired Le Notre, Le Vau and Le Brun to create his own masterpiece at his hunting lodge in Versaille.   Today that is the most visited place in France and at least five times larger than the Chateau that we visited today.

Vaux Le Vicomte is still privately owned, it changed hands three times over the years.   The present owners are  Patrice and Cristina De Vogue, the Comte and Comtesse De Vogue, descendants of Alfred Sommier who acquired the estate in 1875. 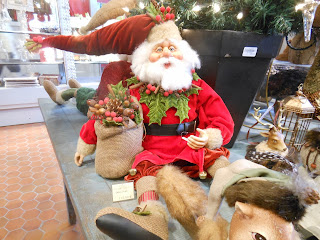 Back to our story today, we walked out to the first of several large fountains, found a bench and enjoyed our snack that we'd brought with us as it was two o'clock.  The huge chocolate art in the kitchen had reminded us of our bar in the backpack!  Spent about half an hour in the gardens and then walked back to the front for a visit to the buggy museum in the stables.  Then to the gift shop where the only thing that caught my eye was a Santa about two feet high with a price of 125 euros!  Too much and how would I get him home!

I used my cell phone and called the telephone number on the card from the taxi driver:  01.64.52.51.50....just in case you make this trip.  He arrived in about fifteen minutes and after we were settled in the car he introduced himself.    He was from Portugal and I asked if his name was Matias Enrico? 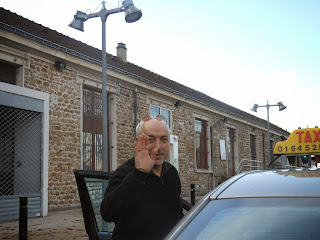 He was amazed and then we told him that in our research on the Internet we'd found a recommendation to use him as a taxi driver as he spoke very good English and was excellent.  He laughed and said he'd met "Colleen" about five years ago and her name pops up regularly among his customers.  Actually the number that Colleen gave was different from what we'd used.  I think the direct number for him is 06.07.94.07.21.   We'd called the company and just happened to get him as a driver; but he was delightful.  It was a couple of euros more for the trip back but still very reasonable.

We checked the trains and found a DIRECT to Gare de Lyon.  Could have taken a "milk run" about fifteen minutes earlier but by waiting until 3:45 pm train, we were back in Paris in half an hour!  No stops!  Back on the Metro...we did only three changes and went a bit out of our way but less of a hassle.  Soon we were back in the sixth arrondissment and after a short stop at the post office we were home by 5:30 pm.  A wonderful day full of beautiful experiences.

I hope you've time to enjoy the slideshow today:
Posted by Martha at 2:24 AM