A rainy day full of wonderful surprises.  We took the train this afternoon and went about fifteen minutes west of Paris to the town of Chatou.   There we walked along the  Seine River towards the bridge that crosses the river to the town of Malmaison.  Half way across there is an access road to a large island in the center of the river that is known as the Isle of the Impressionists because in the late nineteenth century they would spend their weekends here painting on this island. 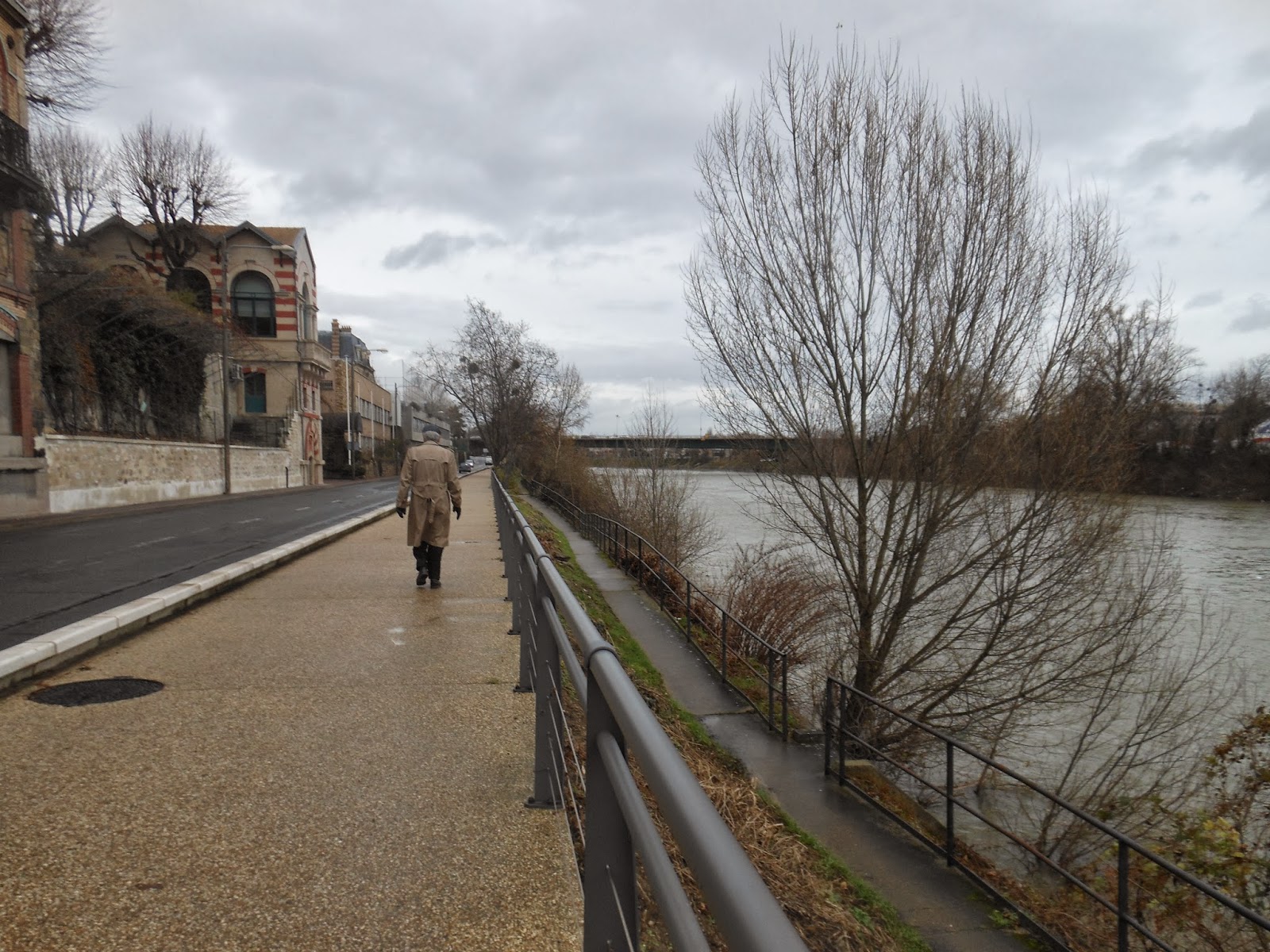 When we left the apartment about one o'clock it was lightly raining.  It continued raining all day but we always managed to be between storms when we were walking except for that original walk.  The walk from the station took about twenty minutes along a broad walking path boarding the river.

As we descended from the bridge we saw the set up for a large Circus that is taking place in a few days at one end of the island.  We were headed towards the other side where there is a famous restaurant that was visited by all of the artists during their weekends.  The restaurant was established in 1857 by Alphonse Fournaise and his wife.  They also rented boats and had a few rooms that they rented out.  Parisians loved to get out into the cooler countryside and enjoyed boating; easily arriving by rail. 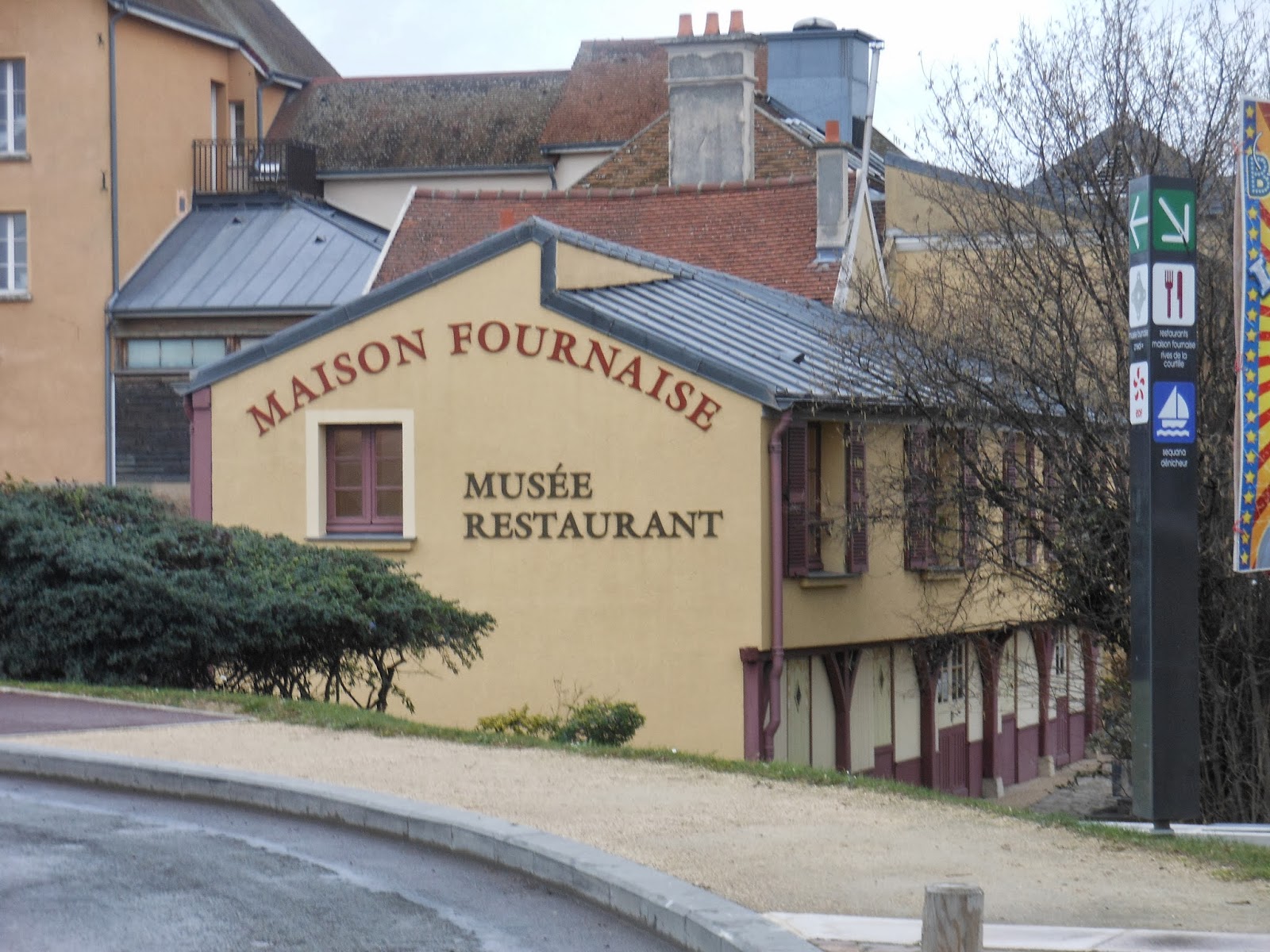 In the 1870's and 80's, Maison Fournaise was the place to be for Monet, Manet, Renoir and others.  One of my favorite paintings by Renoir was painted on the patio of this restaurant over a series of weeks.  Entitled "The Luncheon at the Boating Party".   I recently was given a very good copy of this painting that now hangs in my dining room.  Prior to this I enjoyed reading the book that was written about making this painting with the background stories of everyone involved.

Jim was humoring me with going but it turned out he enjoyed it as much if not more than I did.  And, this has been the first day since New Years Eve that he has felt like going out for the day.  The last luncheon customers were leaving as we arrived.  The hostess talked with us and told us where to find the Museum but she thought it might still be closed.  She suggested that we might like to come back for a coffee if it was closed. 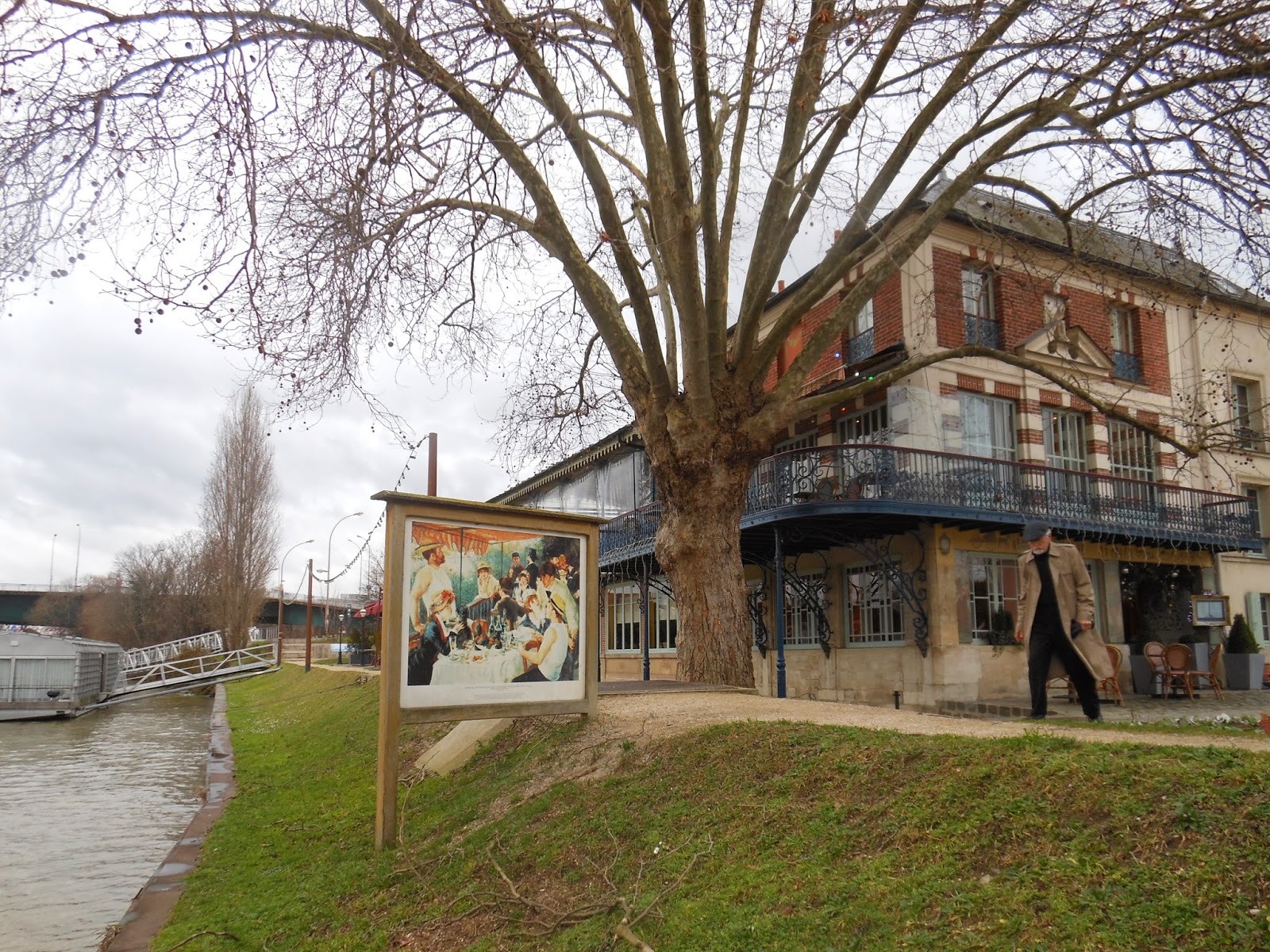 Outside we walked around the building and found the boathouse that has been converted into a Museum.  The restaurant was closed in 1906.  It slowly became derelict until in 1977 when the city of Chatou purchased the property and finally in 1990 it reopened as a restaurant, reinstalling an orange striped awning as in Renoir's painting.  The Boathouse was made into a lovely and surprisingly modern museum.

We tried the door and it didn't open; looked through the windows and were preparing to leave when a lovely young girl opened the door and invited us in.  We'd turned the handle the wrong way.  Not many photos as I was asked not to take photos inside the museum. 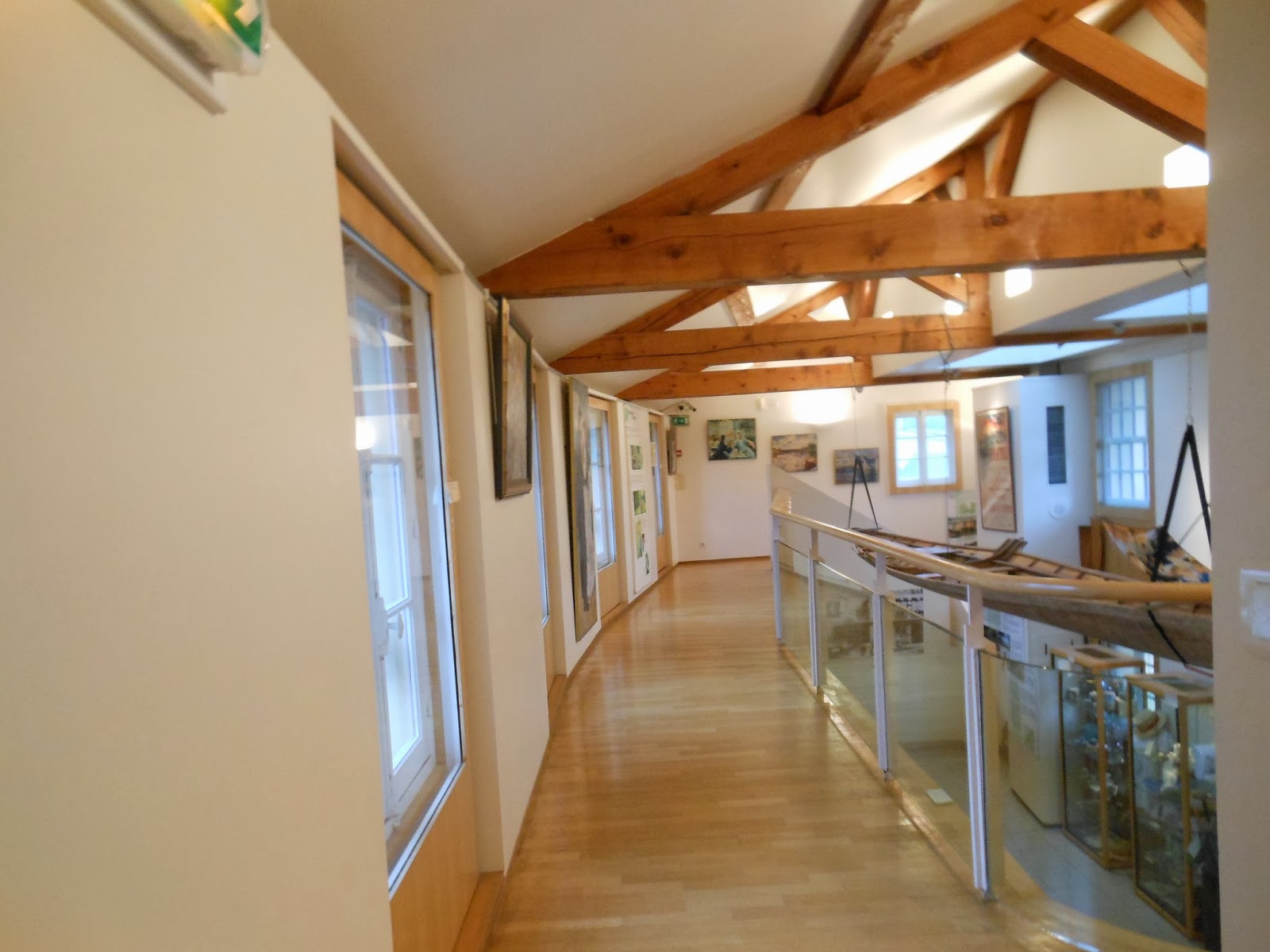 The Museum Fournaise is dedicated to the work done by all painters of this strech of the Seine River, Impressionists and Fauvists alike, as well as contemporary painters who have captured the spirit of the Seine River as it was in prior years.  The film of the river, the painters and its paintings plays continually in the last room of the Museum.  Since we were the only visitors there, she changed the audio to English.  We'd have loved to purchase a copy but none were for sale.

Jim wanted to purchase an umbrella that has the Painting of the Luncheon of the Boating Party on it; but at sixty euros, I thought it a bit expensive.  We settled on a postcard of the painting before leaving her a nice tip for inviting us into the Museum.  It was truly one of the biggest surprises that we've had due to excellent copies of many and several originals that we had not expected to see in such a small museum.  They even had audio guides in English for us to use. 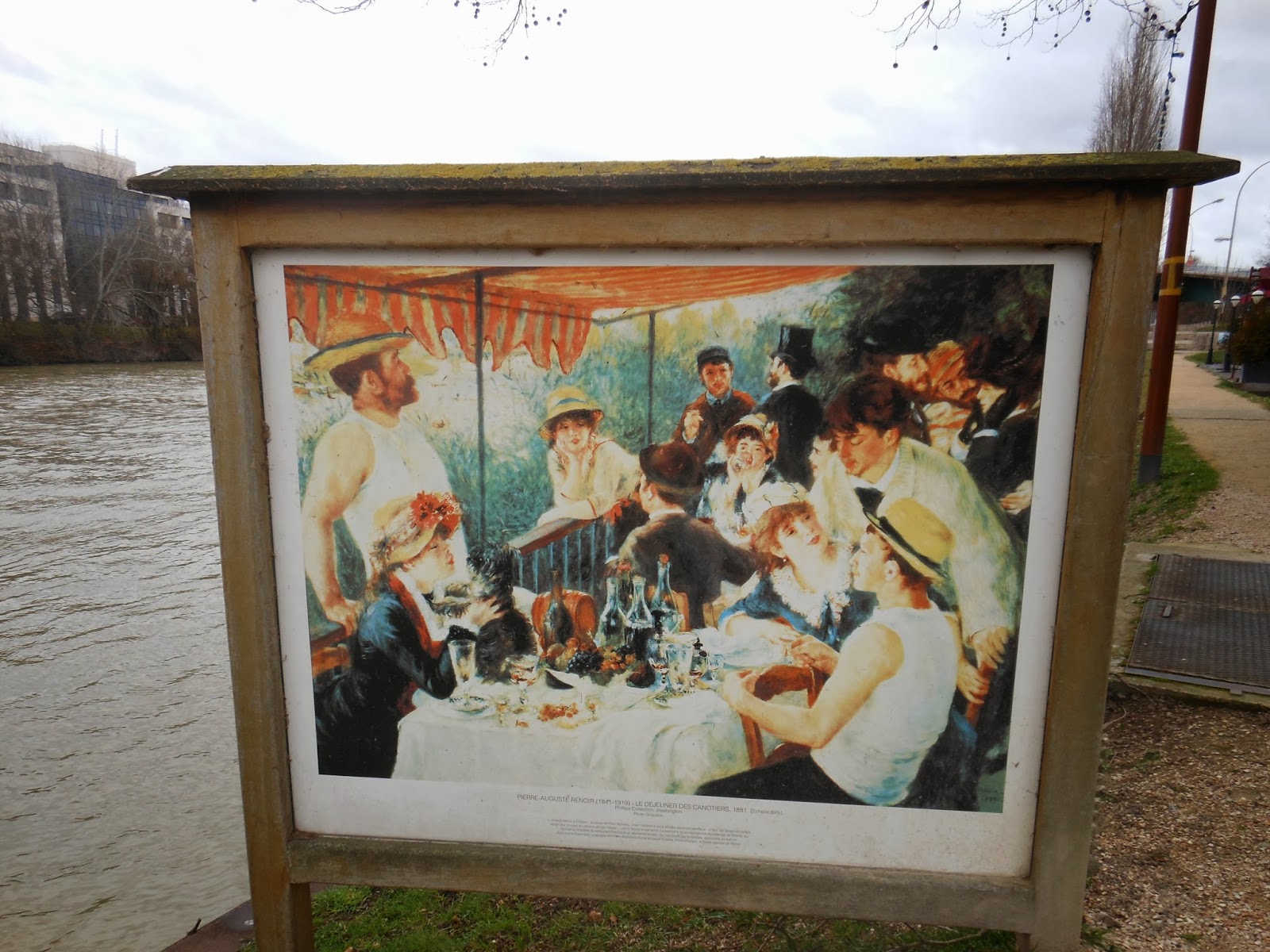 All too soon we'd seen everything and felt it was time to head to the station before another rainstorm started.  We walked around the outside with new eyes after our visit to the museum; enjoying many things that we'd missed when we'd arrived.  This time we walked on across the bridge to the station at Rueil-Malmaison.  Actually it was a shorter distance but not nearly as pretty as the one along the river on the way to the island.

Back on the train and into the city, rain threatened at any moment but held off until after we were safely back in our apartment.  Dinner tonight was chicken fillets cooked in butter and wine with slices of fresh mushrooms, baked yams and some mixed vegetables.  Most was purchased this morning on my visit to the local grocery store before our trip.

The original painting has been in the Phillips Collection, a Museum in Washington, D.C., for many years.

Hope you enjoy the slideshow:
Posted by Martha at 11:56 AM

The Luncheon of the Boating Party is one of my favorite paintings. Thank you for the wonderful description of your outing. We will be sure to visit the island on our next trip to Paris.