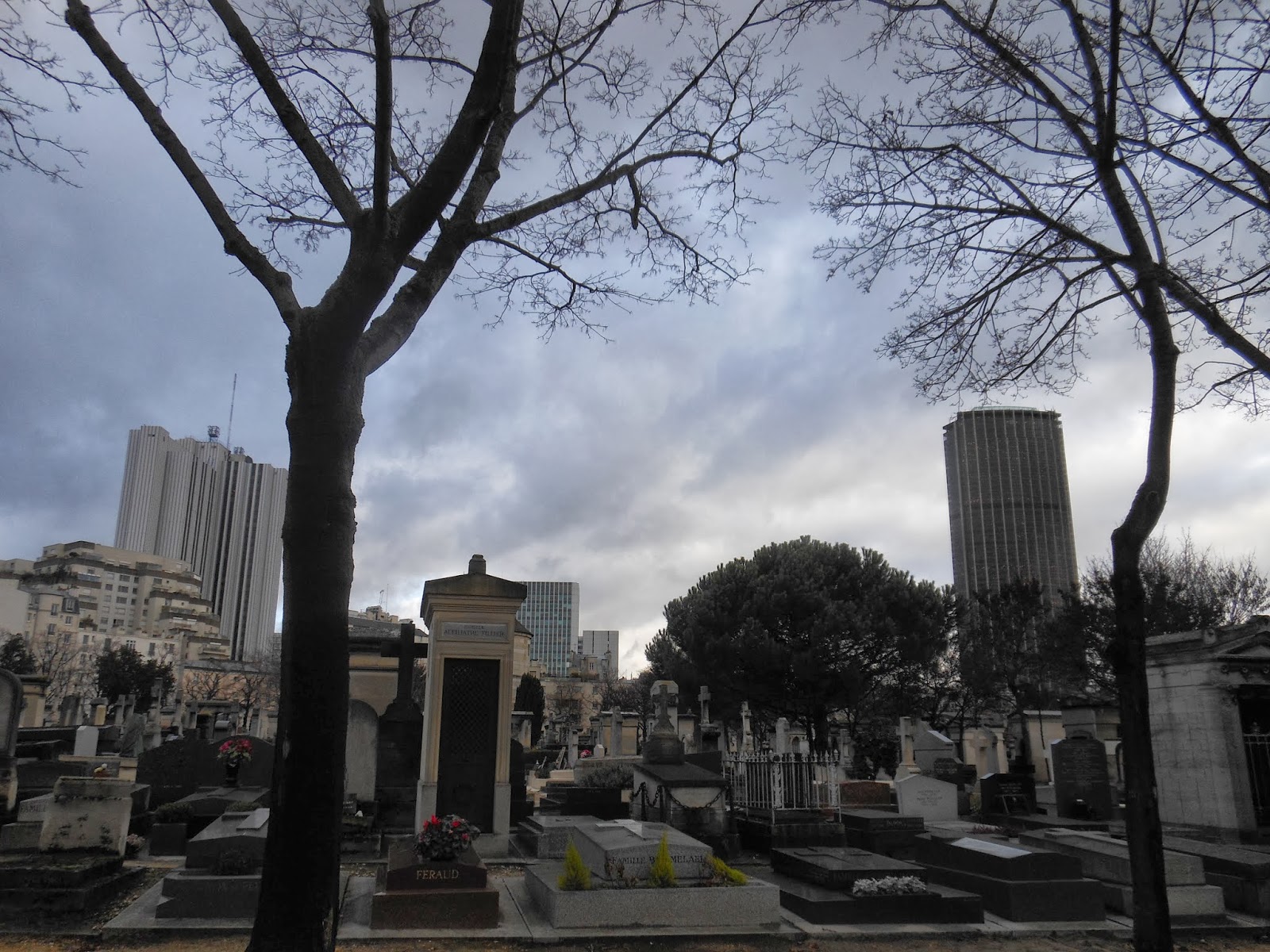 What....another cemetery you say!   But they can be fun.  Montparnasse Cemetery is located in the south of Paris in the fourteenth arrondissmont.  It is very near one of the popular tourist sites called the Montparnasse Tower.  From the fifty-sixth floor you can take 360 degree panoramic views of Paris.  The best views other than the Eiffel Tower.

Today started later than usual; I actually slept in until half past nine this morning.  Raining hard most of the night and it continued until nearly noon.    We waited for the management company to send someone over about the television.  We can only get the basic channels and it appears they need to pay a fee for us.  They came, yes we were right, as of tonight we're still waiting.  Actually, we are getting all of the channels that we normally get in Paris.  But, we've been spoiled with some very special channels this month such as the museum channel.  But, the apartment will be empty after we leave for some repairs so I'm sure they really don't want to pay a month's fee when it will be empty in two more days.  They'd put down a new wood floor among other renovations and the adhesive has come loose.  They'll probably have to move out all the furniture and start over. 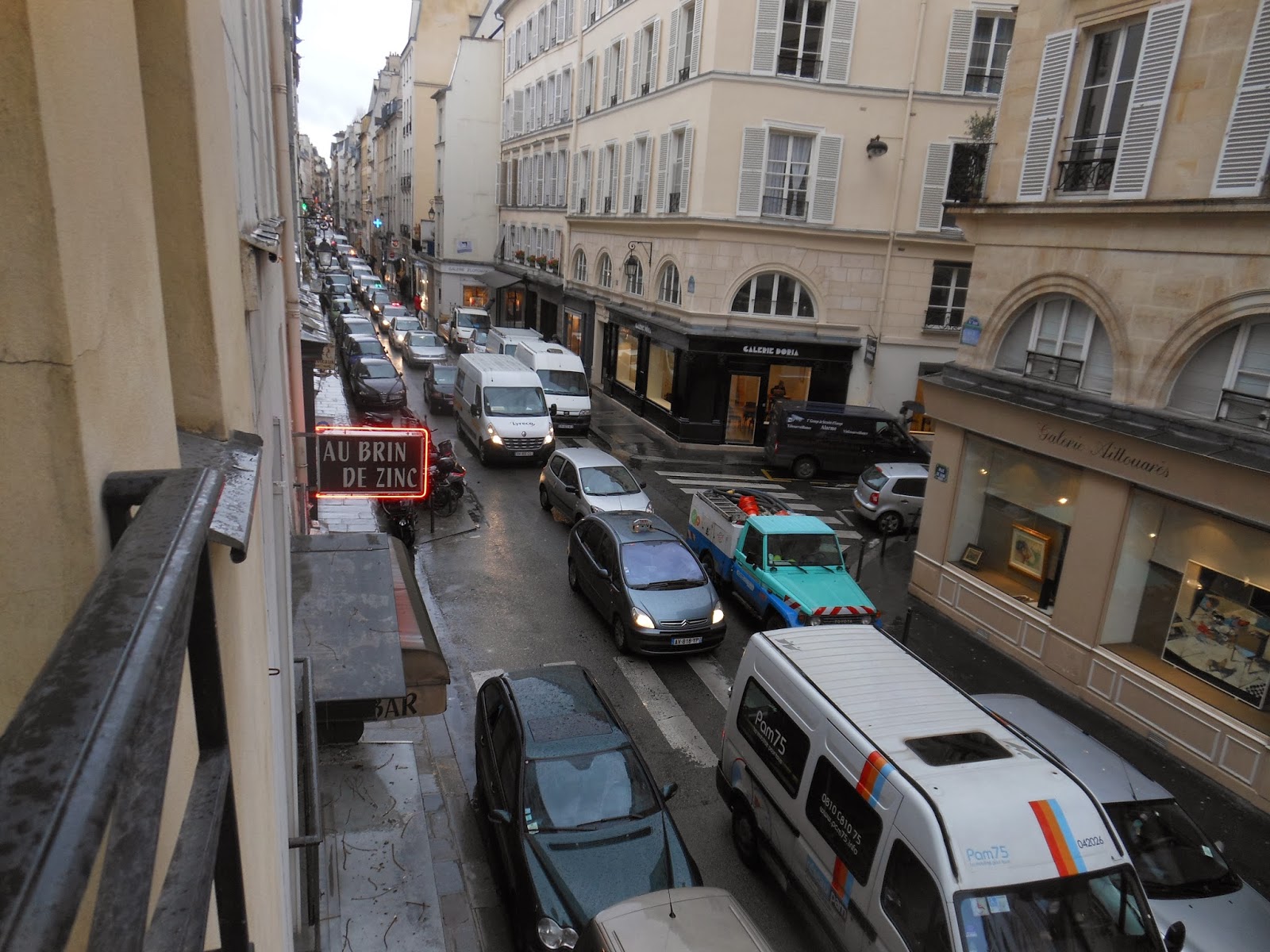 We heard lots of noise outside our window and when we looked a large truck had parked in the center of the street...it's one way and very narrow....and the traffic was backed up for three blocks and they were all honking their horns.  It didn't clear for about half an hour.  The French move in their own time and double parking in these small streets for extended periods of time is common.

About noon we dressed warmly, took our umbrellas and headed for the Metro Station.  It had stopped raining and we decided to get out for a few hours.  Along the way we stepped into an open door and found a cute window display of two drawfs, one dressed as a bishop.  Always fun to peek inside of the large green doors when they are open. 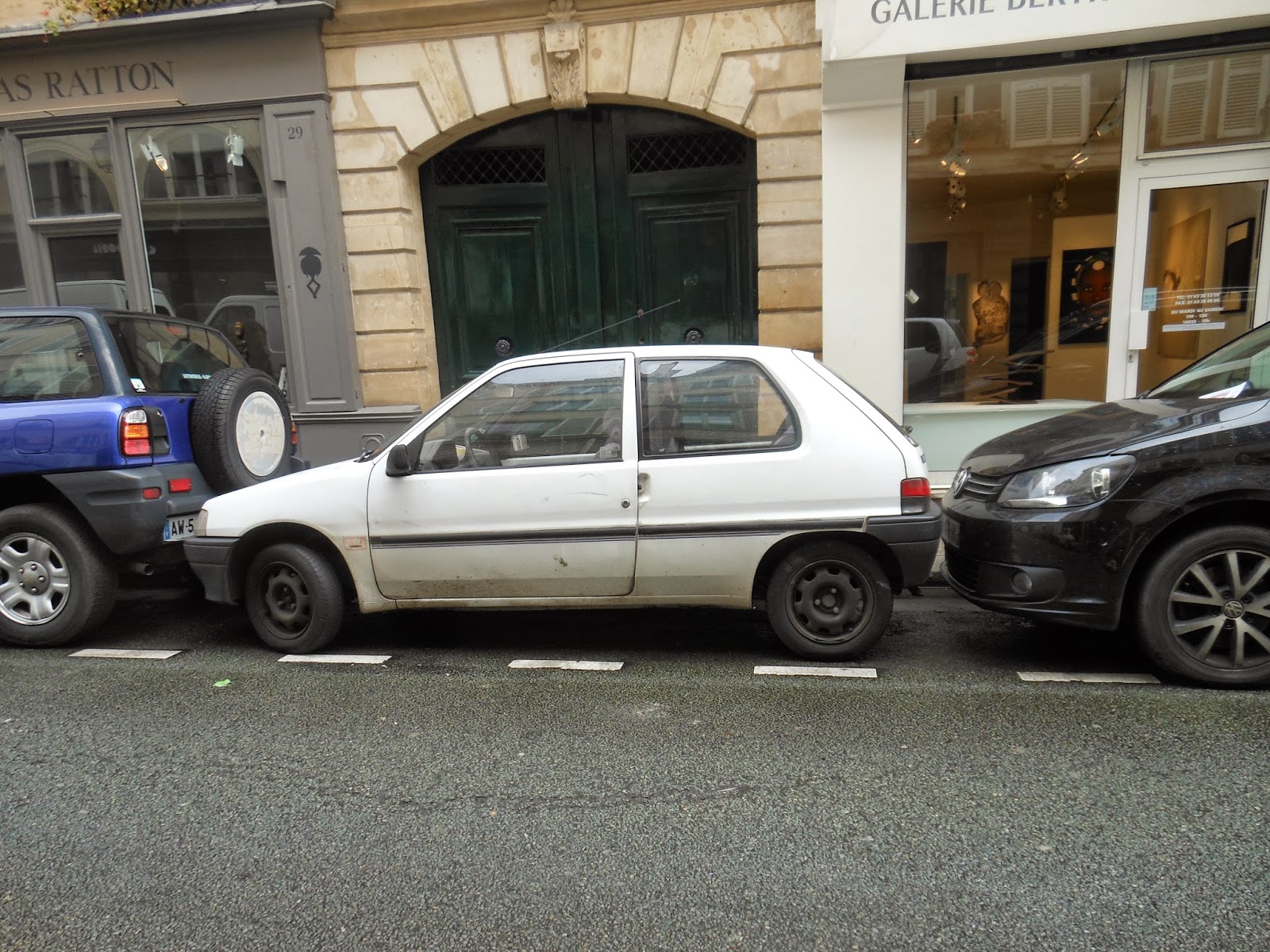 I then noticed the cars and thought I'd give you some examples of how close they park to each other.  I sometimes wonder how they get in an out of the spaces.  Enjoy.

Soon we'd arrived at Montparnasse and because we walked the wrong way we found the theater district with many old theaters and restaurants.   We started asking for directions...none of the ones we received worked because they were pointing to the cemetery but there were no gates to enter.  Finally we walked back past the Metro Station and around the corner and voila...there was the gate. 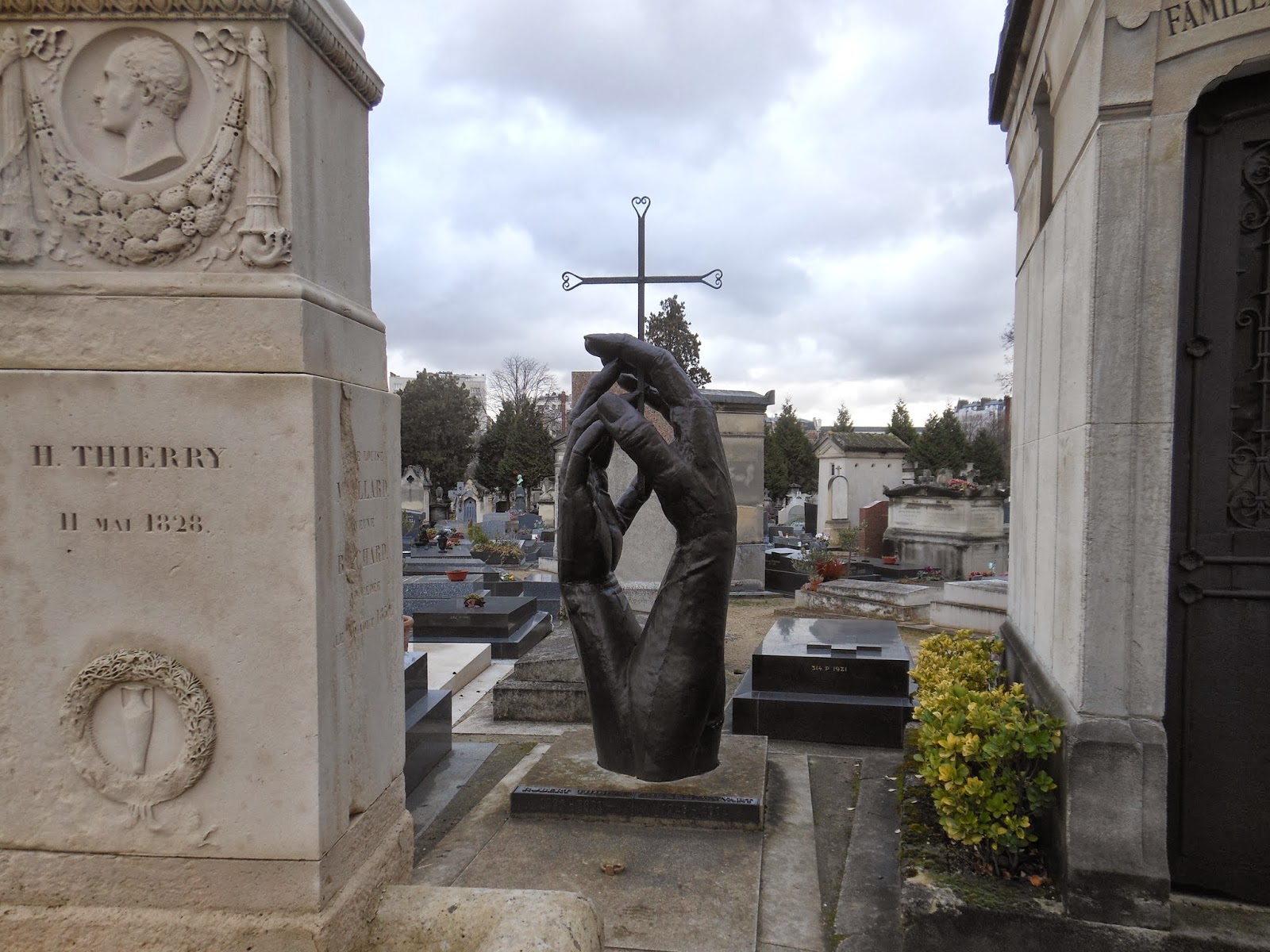 It's a beautiful cemetery built on grounds that were the dumps of Paris for many years until the city walls encompassed this area also.  It's level compared to the other two we have visited.  Very nice and easy to walk but...no maps available.  So we had the same problems as yesterday.  Except that today it was not raining; well not for the first hour at least.  Then the rains came.  We didn't find any of the people we'd hoped to find; but found a famous French Singer and many beautiful and unusual tombstones.  One that was extremely unusual was a large fish with women's breast on the side?  The saying on the back was ........so I will eat sardines.   So I think this was suppose to be a sardine.

The rain came down much stronger than yesterday so we were soon headed back for the Metro and home.  Stopped at the grocery store for something for dinner tonight.  Last night was nice but we do enjoy eating at home.  Picked up something easy that we could finish tonight.  Tomorrow is our big farewell dinner.  Looks like the rain will continue most of the night.  Yes...I did bring a backup pair of old tennis shoes.   I wore those today and I think they will also stay in Paris when I leave.  Both pairs are pretty wet inside.  Not to worry:   I do have a lightweight pair of tennis shoes for the trip home and my good flats for dinner tomorrow night.

One of my readers said that she was going to miss checking in each night to see what Martha and Jim had done for the day....we will also miss sharing with you.  We've truly enjoyed this month.