Yesterday was a day of rest for Mr. Jim who is suffering from a cold and after I typed my blog from our visit to the Chateau, I had a very busy day.   I'm the cook and dishwasher along with the shopper for these few days while Jim is under the weather.  And a trip to the laundromat.  I'm enjoying my solo journeys around the neighborhood as I do my housekeeping chores.

Late in the afternoon I walked along the Seine River and got caught in a sudden downpour.  Finished my errand and returned home before I got too wet.  Actually it had stopped by the time I arrived home.  Guess I'd better keep that umbrella in my pocket even when the sun is shining!   I'd gone to the camera shop to ask about the lens that would not close on my camera.  Apparently this is a common problem with this camera and it will have to go to the repair shop when I get home.  Fortunately I brought two cameras so I'm in good shape for the rest of the trip. 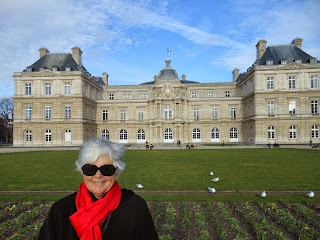 Today I got Jim to go out with me and visit the Luxembourg Park.  It's straight down our street, Jim said it was about a mile.  The street ends at the Luxembourg Palace of Maria de Medici.  This palace is now used for both government offices and a museum.

On the way to the park I took some photos of the outside market that we walked through as we went down our street.  I wonder if these will disappear as it gets colder.  The restaurants still have many outside tables for their customers; some inside of plastic others with just heaters.

Inside of the park I saw flowers planted; not many but some of the first that I've seen on this trip other than in the shops. 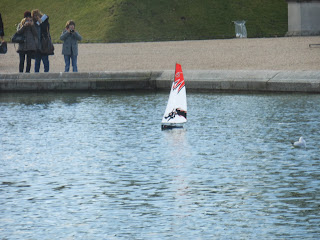 At the fountain where children play with their boats using a long stick during the summer months; today there was only one boat that was remotely controlled by an adult.   But the park was full of people; many sitting with their faces raised towards the sunshine.  They are all aware that winter is coming and these days will be fewer and fewer.

We walked over to visit the chess players....only one table today.  Watched the tennis players; the courts were full today.  And checked out the French way to store the vast amount of leaves that are dropped by the trees; huge wire fences keep them corralled into pens for compost uses.   It was a fun couple of hours outside of the apartment. 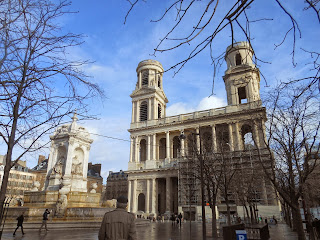 We walked home a different route past Saint Suplice church with it's merry-go-round outside.  Notice the Wallace Fountain; they're found all over Paris and provide safe drinking water for everyone.  There are still some Christmas decorations but most are starting to disappear.  The little white houses outside of Saint Germain des Pres church have all disappeared today except for one that is selling Hot Wine.

Back to the apartment for a snack and a nap before leaving again about four o'clock.  It had begun to rain and so instead of in the pocket the umbrellas were up as we walked to the Metro Station.  One stop and we were at Severs-Babylone Station; walked out and over towards our destination.  Along the way we spent a few minutes in the huge department store of Bon Marche; lost each other and used our cell phones again to reconnect.  They are a good investment! 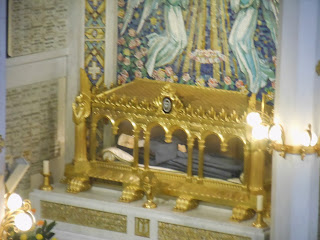 We then walked half a block to the Chapel of Our Lady of the Miraculous Medal.  When we were on our trip to Israel, several people told us about this and said we should definitely put it on our must do list.  They had a 5:15 pm Mass that we planned to attend this evening.  Arrived fifteen minutes early and it was already packed.  They have two upstairs balconies for seating and by the time Mass started they were also full.  This Chapel is in a convent of the order of the Daughters of Charity of St. Vincint de Paul.  It has become famous because of a nun by the name of Catherine Laboure.  She was born in 1806 and died in 1876.  Her body was exhumed and found to be incorrupt in 1933.   She had apparitions (visions) of the Virgin Mary during her life and she saw a vision of the Miraculous Medal.  This vision was recreated as a medal that is wore by many Christians all over the world today.  It was in an earlier version of this chapel that we visited today where one of the apparitions took place.  She was canonized as a saint in 1947.   Her body lies inside of a glass coffin on the side altar of the chapel.

The rain had stopped by the time we left the church and it was an easy trip home by Metro.  I fixed dinner and we've enjoyed another pleasant evening.  Jim even said he's feeling better; I told him it was getting out in the fresh air....he doesn't agree!   But tomorrow is the first Sunday of the month and that means many of the major museum will be FREE!   I think he's going to feel fine tomorrow morning!  Hope you enjoy the slideshow: