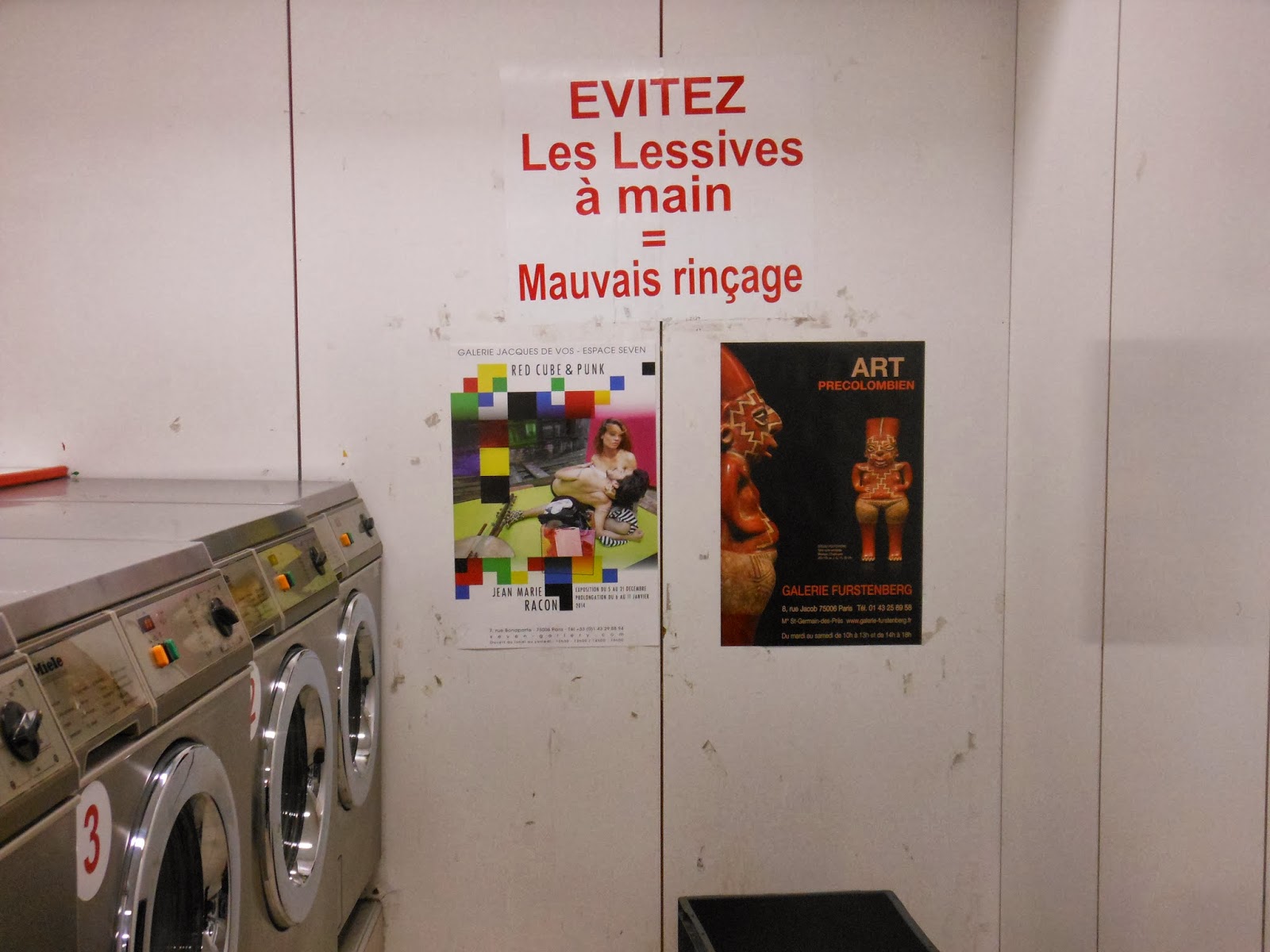 This morning we both went to the Laundromat and did three loads of laundry including the sheets and towels.  Now we're set for the last week of our vacation.  We were surprised in the laundromat with all new posters of art shows on the walls.  Made the place very festive.  I left Jim in charge of the machines and walked over to the grocery store for a box of tissues...both of our noses are running with the cold weather.  Yes, today it seems the coldest ever!

At three o'clock we caught the #95 bus that took us towards Montmartre; but we got off the bus at the cemetery just before you enter the area around Montmartre.  The road actually goes over the top of the cemetery.   Walking down steps we entered and stopped at the office for a free map showing the sites of some of the more famous people who are buried here.  There was a beautiful cat sitting on the counter and I remember that Jim said this cemetery is known to have many cats.  But this is the only one I saw today! 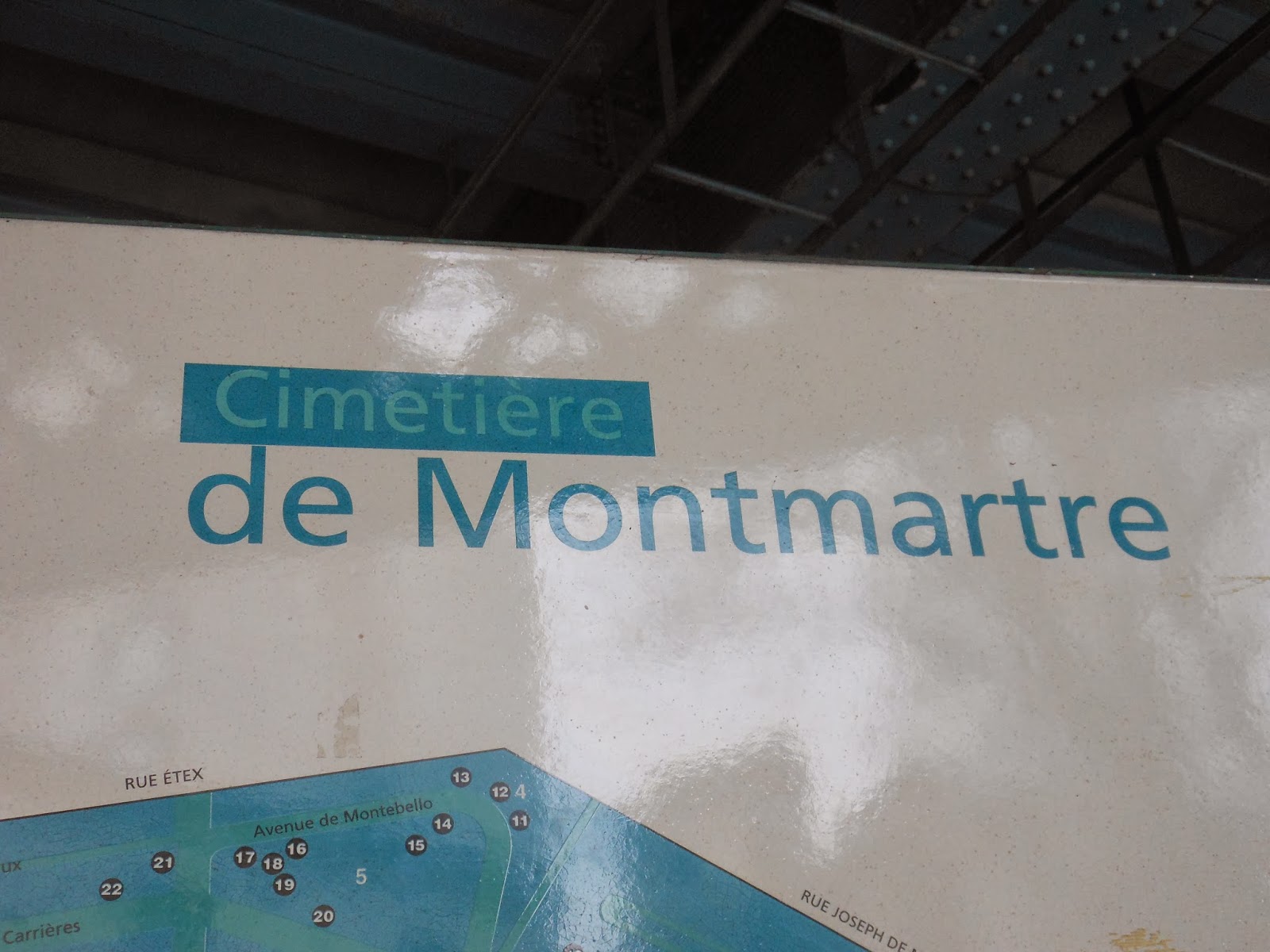 We spent nearly two hours tromping around the old cemetery and found nearly all of the ones that we had marked on the map.   One that was impossible to find was Gustave Moreau the painter.  But we think it was one of those that had such a soft stone that the engraving had disappeared.

Some that we found:  Family of Camondo; the Jewish Banking family that donated their home to Paris in honor of the son who was killed in WW I; then the daughter was turned over to the Nazi in WW II and died at Auschwitz.  We've visited the beautiful home that is now a museum last fall.

The Painter Edgar Degas, the writer Alexandre Dumas, the composer Jacques Offenbach and Emile Zola, a writer whose body was transferred to the Pantheon but his tombstone is still here. 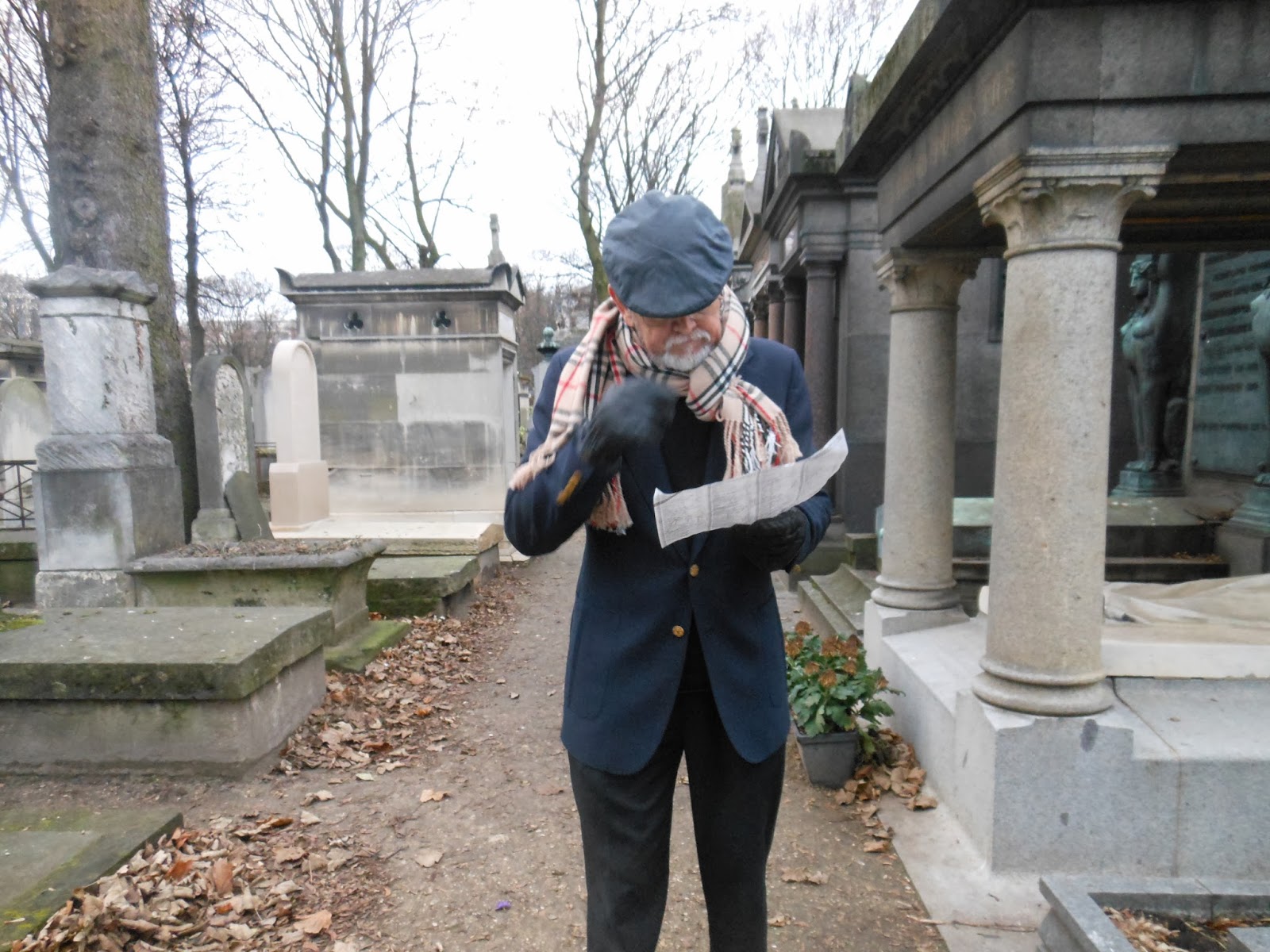 We watched workman use a lift with an arm that extended out far enough to reach over several rows of graves to the one that they were working on.  They put down the heavy new marble marker and then proceeded to use it for lifting the stone on the old ones that they were replacing.  Made me think of my growing up years; my father was the superintendent of a very large cemetery and we lived across the street.   We also watched from a distances as mourners came for a buried service.  Yes, the cemetery is very old but still has new burials all the time.  I'm not sure but I think if a family stops paying the fees; the ground is resold...not sure about that.

We rode the bus both ways today, a nice change from the underground.  But it was so cold!  We walked to Notre Dame area to check out the elevator that goes down from the street to the RER B for our trip out to Charles de Gaule Airport next week.  If the weather is good we'll walk the ten minutes to this elevator that goes directly to the track for the train.  If it's raining we'll be getting a taxi for the short trip to the train station at St. Michel.   Good to plan ahead.