We woke to sunshine again and Jim was feeling better so by eleven o'clock we were out the door and walking towards St. Suplice Church.  Walking past the church we found our first site at # 6 on Rue Ferou; a home where Hemingway lived with his second wife Pauline around 1927.  By this time he was making money but it was his wife's wealthy family that actually purchased the property for them.  A far cry from the two room apartment with the bathroom down the hall that we saw two days ago. 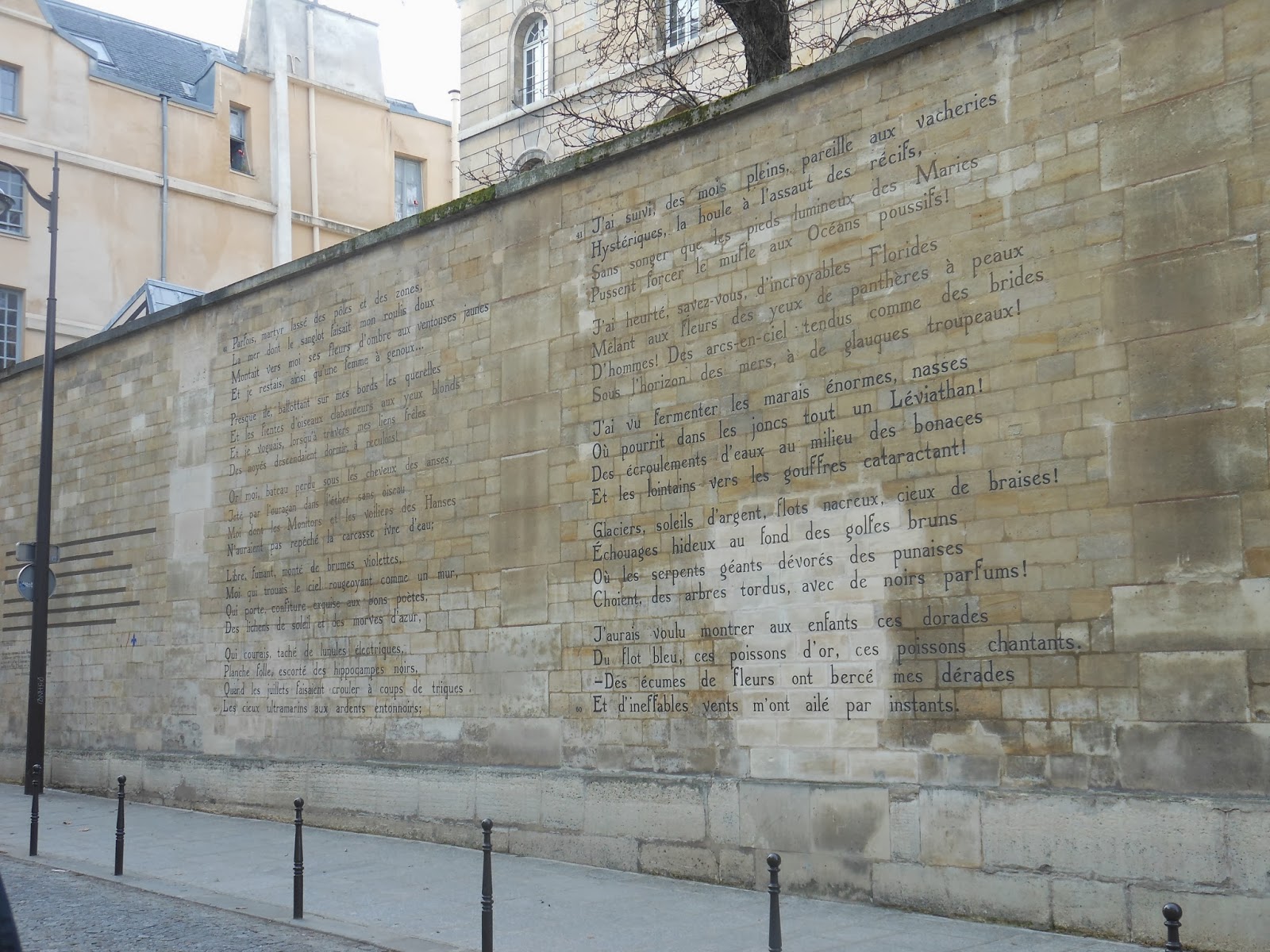 On this street we also found the poetry of Arthur Rimbaud chiseled into the wall.  He was a much beloved French poet who died very young.  The poem on the wall was "Le Bateau Ivre" (The Drunken Boat).   Jim was enthralled as he knew both the poem and the author.

Continued walking up the street to the entrance to the Luxembourg Museum, then around the corner to #10 Bis rue Serandoni and the favorite restaurant of the author John Baxter whose book Jim has been reading while we are here in Paris.   The Baxter family also lives in this area; but not sure just where. 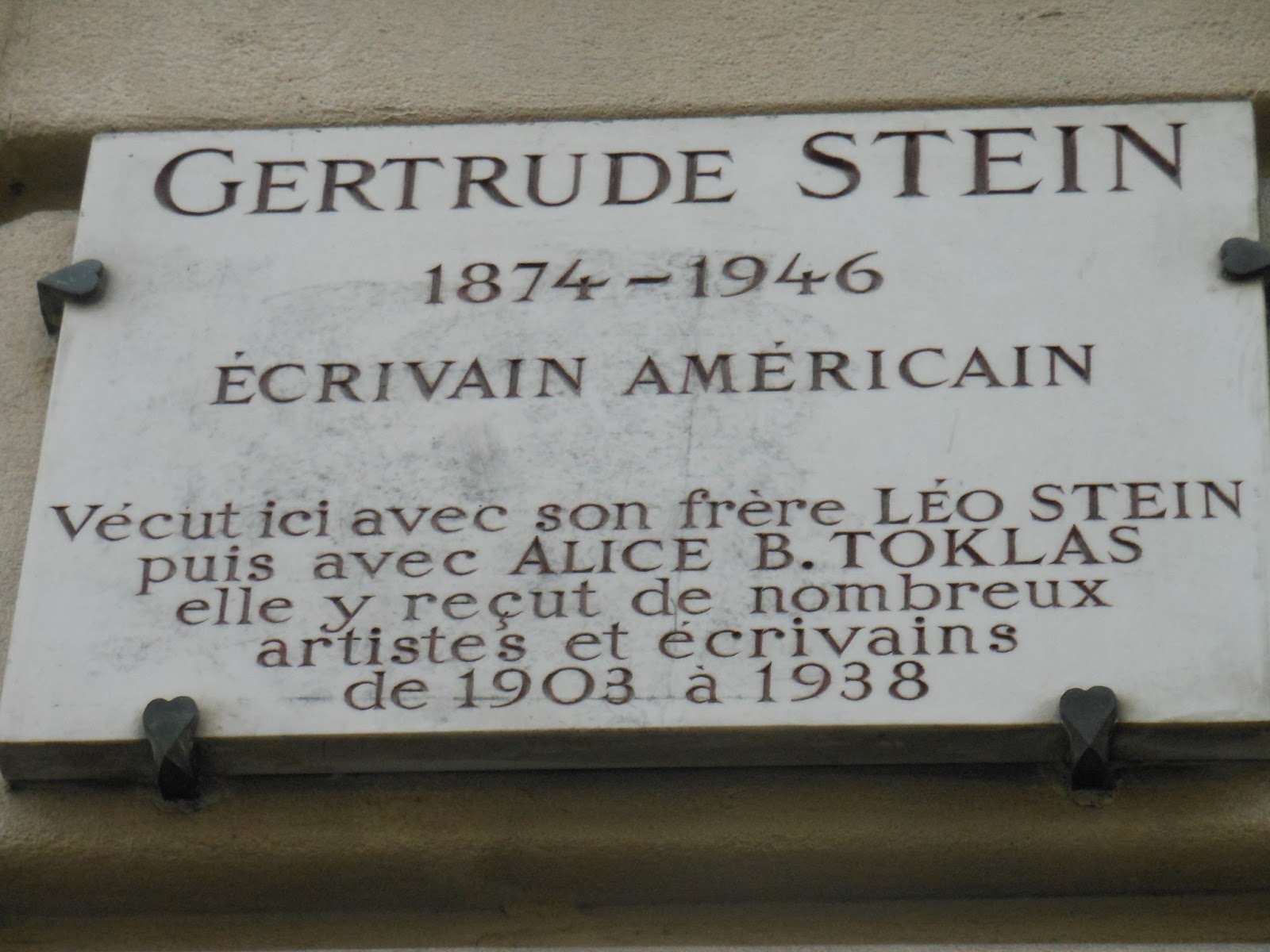 Walking west along the north wall of the Luxembourg Gardens we headed towards the home of Gertrude Stein at #27 rue de Fleurus.   This street had the added bonus of many art deco buildings that were fun to look at.  Soon we walked back a block to rue d'Assas and walked south along the west wall of the Luxembourg Gardens all the way to the Gardens of Grands Explorations at the south end of the Gardens.  Here we enjoyed the beautiful fountain of wild horses; dry as all small fountains in Paris are at this time of the year.  Even the beautiful Wallace drinking fountains are turned off during the winter. 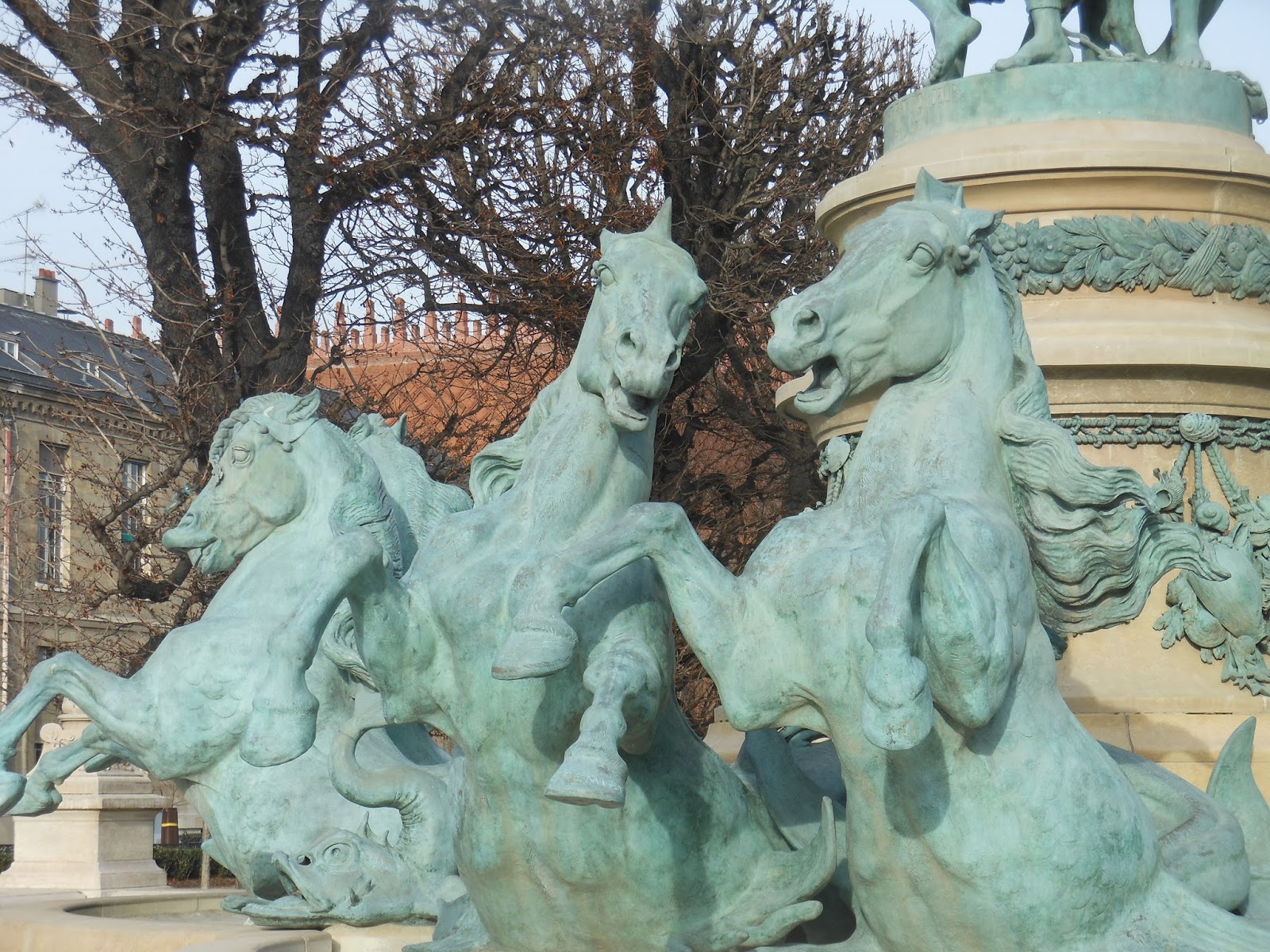 Across the street we found the Closerie des Lilas restaurant (this was our destination when we got lost on Monday); and it was also visible from the RER Station that we'd used on Monday.   No plaque on the outside...you need to go into the bar to find it.   So we turned and walked down the nearby Notre Dame des Champs to #113.   Hemingway lived here with Hadley after he'd was making more money and it is rumored that he wrote his famous "The Sun Also Rises" while sitting in the nearby restaurant Closerie des Lilas.  The building is gone and another modern building stands in it's place. 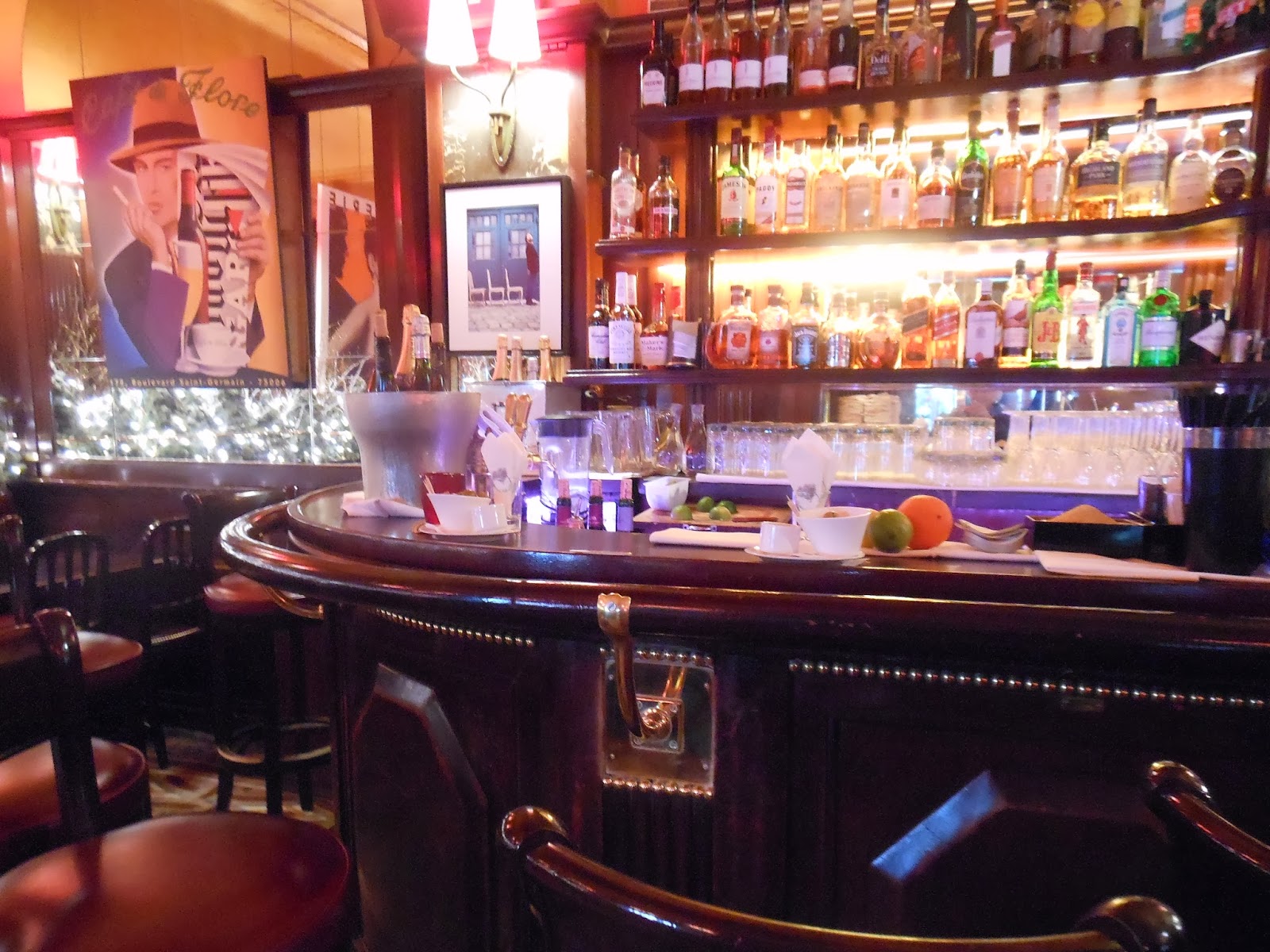 We turned around and walked back to the restaurant and this time Jim insisted on going inside and asking if we could take a photo of the plaque at the bar.  They were wonderful...of course we remembered to greet them and then ask....and we took our photo of the place where he sat at the bar  and did his writing.

We then walked across the street and caught the RER back to St. Michel; there we changed to the Metro and exited at the Odeon Station.    This time we were looking for # 12 rue de L'Odeon; this is where the original Skakespeare and Company Bookstore was opened by Sylvia Beech.  She is also famous for being the only one who would publish "Ulysses" written by James Joyce.   Her bookstore became a haven for the many writers who flocked to Paris in the early 1900's including Hemingway. 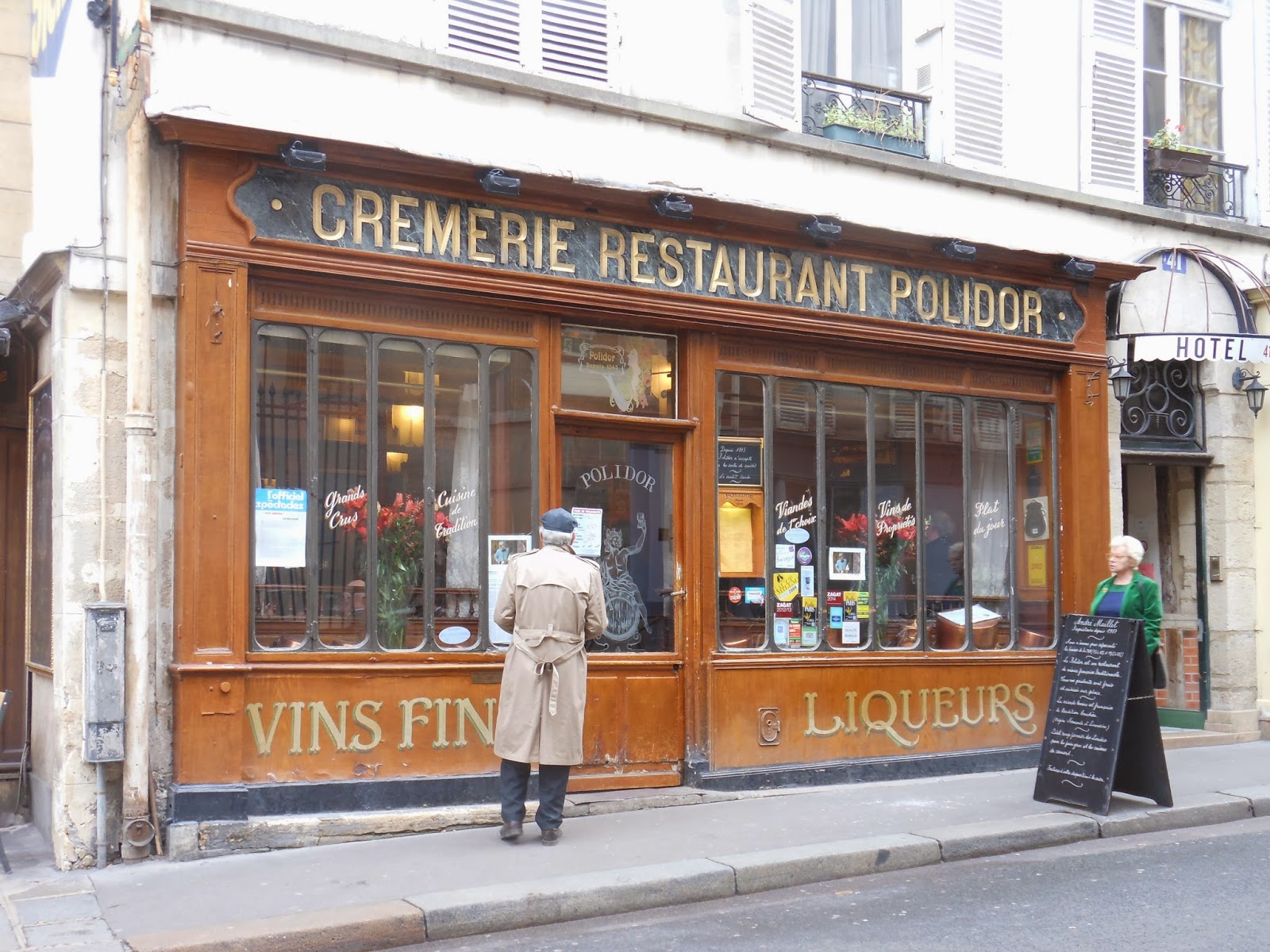 We walked up the street to L'Odeon Theater of Europe, rounded the corner and headed for # 41 rue Monsieur le Prince:  Polidor Restaurant; a favorite of Hemingway's when he was poor!   We also think that this restaurant was used in the movie "Midnight in Paris" for the old building that turns into a laundromat when he turns around.  It looks like it and there is a photo of Woody Allen that was dated 2010 in the window.  We'll have to watch the movie again!  I do hope we've remembered that correctly.

Our tour was finished so we turned around and headed up boulevard Saint Germain towards our apartment.   Suddenly we notice a movie theater and saw that they were playing the newly released movie "The Secret Life of Walter Mitty".  We decided to go home for lunch and come back for the three o'clock show since it is still in the English Version with French Subtitles. 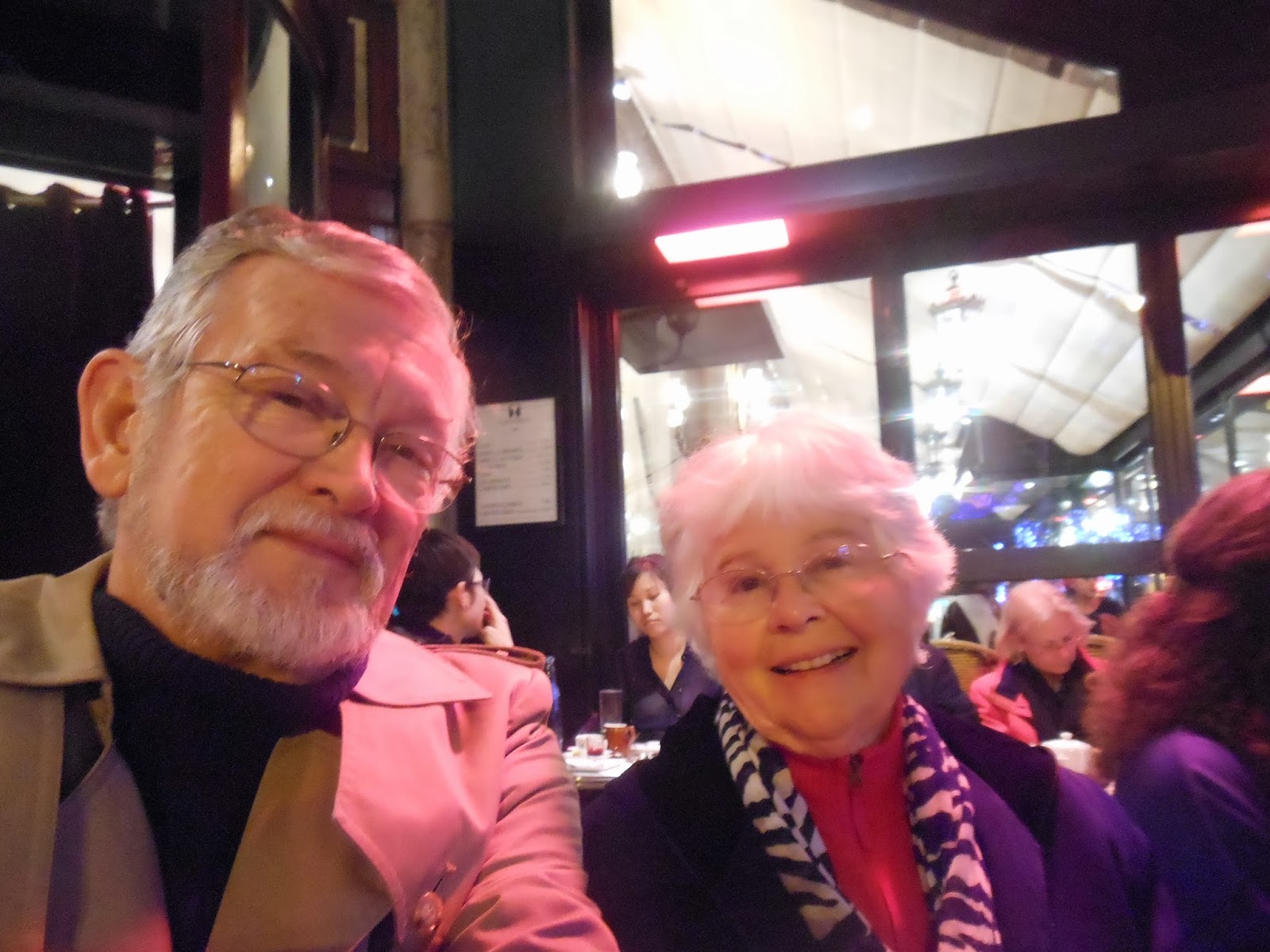 We enjoyed the movie and then walked over to the three famous restaurants on boulevard St.-Germain where everyone who was anyone spent time in the Hemingway years.  Tonight we sat outside of Les Deux Magots and enjoyed Hot Chocolate for Jim and Capachino for me after taking photos of Cafe de Flore and Brasserie Lipp.  A fun evening and something I've always wanted to do.  We made a toast to twin Mary and her friend Violett who wanted to do this in September but ran out of time!

We even stopped and purchased roasted chestnuts from the vendor in front of the restaurant before walking home to the apartment.  We were nearly there when we decided to walk out to the river before dinner.  Enjoyed the views, using my "night scene" setting I got some nice photos before we started back.   The rain started just after we saw the spot light on the wall; creating art using the branches of a tree.  We rushed the last block and then enjoyed a wonderful evening at home.

Hope you enjoy the slideshow:
Posted by Martha at 2:43 PM