Free Museums in Paris on the First Sunday

Yes...every month the city of Paris opens nearly all of it's major Museums for anyone to enter FREE.  We had gone on the first Sunday last September when we were here; we visited the Louvre but we'd gone about an hour before closing and walked right in with no lines.  We charted the opening times of the four museums that we were interested in going to today; the closest and first to open was the Louvre at nine o'clock. 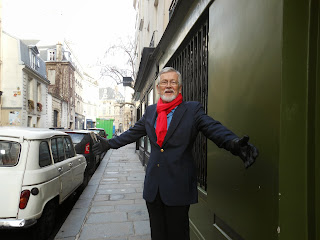 We were awake by eight o'clock; that in itself was unusual during this trip!   Jim was not feeling as well as he appears in the photos in the slideshow so it was nearly eleven o'clock before we were out the door.   We walked to the end of our block, walked across the bridge and into the Louvre...we are literally less than ten minutes away.   We could see the end of the line before we could see the glass pyramid; it stretch for nearly half a mile.   So we headed across and through the buildings to the Rue Rivoli and entered into the Carrousel Mall Entry that has an underground entrance into the Louvre.  The lines stretched from the bottom of the escalators, past the stores, around the inverted pyramid and into the entrance to the Louvre.  Unbelievable.   One would stand for hours in order to get into the museum for free at either entrance! 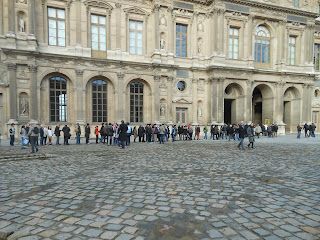 We got on the Metro and headed for our second choice and the furtherest away and we thought the most unlikely to be crowded.   Two metro changes and we'd arrived and to our amazement;  the line was even longer at the Pompidou Center!   We enjoyed the Stravinsky Fountain created in 1982 by the artist Niki de Saint Phalle that has sixteen mechanical pieces of art; all of a very modern design that is adjacent to the museum.

Then we walked into the church that boarders one side of the square called Saint Merry.  Very old and interesting, especially today.  They had a table set in the sanctuary with the communion things and the Mass was being said down in the center of the church with the chairs in a circle.   I've never seen this done before.  The nativity scene was also very unusual; black and white drawing on large sheets of paper.  We stayed for awhile and then continued our walk in the fourth arrondissement; stopping for a moment to admire the Tower of Saint Jacque that is the only thing that remains of a very large and old church that was destroyed during one of the revolutions. 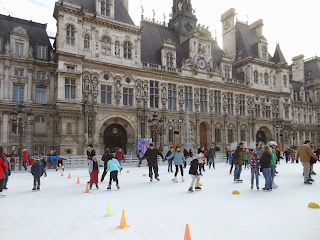 Soon we'd arrived in front of the Hotel de Ville (City Hall) where they have the ice skating arena built every winter for the citizens of Paris.  Today the sun was shining and the rink was full of people of all ages having fun.  The lines were shorter here than that night before Christmas when we watched them skating in the rain.   Crossed the street and entered the Metro again.

This time we headed for the Place de la Concorde and L'Orangerie Musee.  We walked into the Tulleries on our way to the Museum and admired the large fountain where people were again enjoying the sunshine in the green chairs around the edge.  A beautiful gold ball sits in the middle; we assume that water flows from it during the summer.  Over to the side we found the bulk of the green metal lawn chairs that fill the park during the summer.  They've been stacked for storage during the winter. 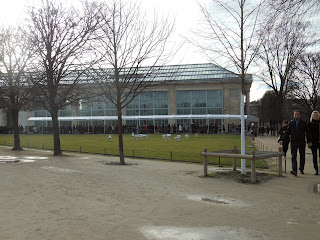 Then we looked up at the museum and this line stretched from the front door, all the way down the side of the building and around the corner to the middle of the back of the building!   Again...the lines are unbelievable.  One last museum was on our list of possibilities:  d'Orsay.  We walked over to the quai and headed towards that museum, crossing over a very beautiful bridge along the way.  We just started across when another gypsy tried to trick me with the gold ring again (different girl...same ring I think).  This time I walked right pass and refused to acknowledge her; she quickly scooted off the bridge with her partner.  But we watched and sure enough she tried it on a couple walking along the quai and we could tell they waggled their fingers at her showing that they also knew her game.

We're weren't surprised that the d'Orsay was also packed with long lines.  I think that we were just lucky last September because so many of the French were still on vacation.  You definitely have to be very patient to use the benefit of the FREE Sunday for Museums.  We walked on home and enjoyed some lunch and watched our wonderful Museum Channel on television that runs twenty four hours a day.  It's shows wonderful art from museums around the world with classical music in the background as it hovers very slowly over the finer points of each painting.  Jim hates to leave the house because he loves this show so much!  But, we don't think we can get it on television in the USA!   Maybe we can get it on our computers; we never will have to visit another museum again!!!   LOL

About three o'clock I decided to go out on an adventure by myself.  My good friends Pete and Judy gave me a book before we left called"Forever Paris"  25 walks in the footsteps of famous people.  I'm saving the Hemingway one to do with Jim so this afternoon I selected "Moliere's Paris - Palais Royal and Musee du Louvre". 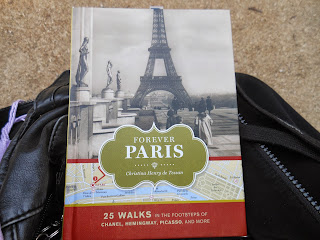 I took the Metro and made two changes before arriving at the underground Metro entrance to the Louvre.  Just checking to see how the line is doing.  It closes at six o'clock and it is now half past three; the lines are just as long as they were early this morning!  I called Jim to tell him that it was a good thing he stayed home; we were done with museums for the day!   Since we've been to all of them several times it wasn't really that important on this trip.

Off to the beginning of my Walk, I crossed the Rue de Rivoli, walked past the five star Hotel de Louvre and into the Comedie Francaise, the first stop on my Route.  From there into the Palais Royal Gardens.  I walked through them to the end where I found the Royal Palace Theatre.  Over to the rue de Richelieu where I located the building where Moliere died and then took photos of the large statue at the monument at the beginning of the street that is named for him.

I then walked back towards the Louvre until I found the rue St.-Honore that parallels rue de Rivoli.  I was looking for the building where he was born.  I found the right place but no building with the address.  I looked and looked.  It was missing.  There were two other woman also looking with a book in their hands.  I finally looked up and saw the plaque on the wall.  One woman had left but the other was still there and I asked if she was looking for Moliere; she gave me a puzzled look...she didn't speak English.  I pointed to the sign on the wall and her book.  Suddenly her husband walked up and he understood.  They both smiled and thanked me and wished me well with my visit.  We each went our own way.    We were all looking for number 96; the block before started with 102 and then we had 94 and 92...no 96.  Apparently this very tiny building has that number but they neglected to put numbers on the building.   But the plaque was there on the second floor or was it the third? 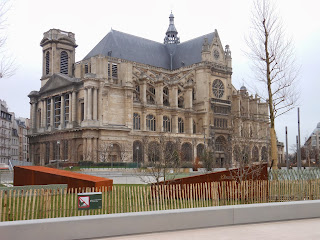 My next site was the church of St. Eustache where he was baptized.  I knew this one was near the Bourse, the stock exchange; and also in the middle of a huge construction site.  But I started towards the area.  When I arrived I was absolutely amazed.  The construction was finished and the area was completely transformed.  I can't wait to take Jim over to show him the change in the area.  We had not expected it to be finished until next summer.  There are still parts further east that they are working on but for the most part the western end nearly the church is finished.

I called Jim and said I had one last site to find and then I would catch the Metro home as it was getting dark.  I found the area but not the building I needed.  I did find some new Christmas street decorations that were on and snapped a photo.  Also found a grocery store open, unusual for Sunday, and picked up some bananas and a box of tissues for Jim's nose!

Found my Metro stop and with no changes arrived back in our neighborhood before six o'clock.  Made our dinner and we've enjoyed our evening at home.  Jim does seem much better tonight and maybe we'll do a walk together tomorrow.