We had a relaxing day that began about noon when we headed for our Metro Station.  Three changes and we were in the ninth arrondissment.  Remember that Paris has twenty districts called arrondissments.  Arriving about 1 pm we spent the next hour walking leisurely through two of the beautiful Galeries sometimes also called Passages.  Many of these vintage covered shopping malls are being given a new life here in Paris. 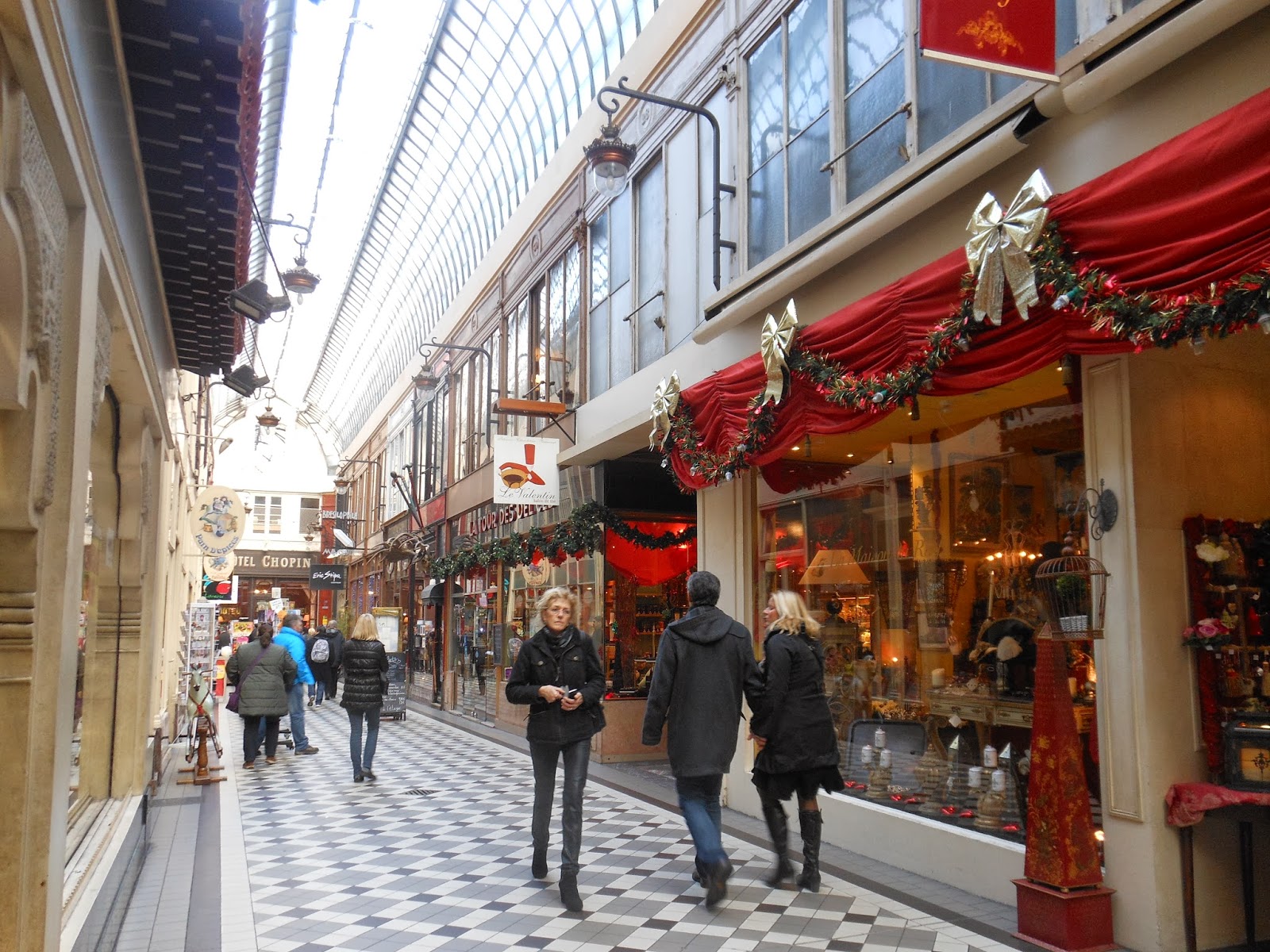 Today we visited the Passage Jouffroy and the Passage Verdeau that are just across the street from each other.  The style of both is very Belle Epoque, reminiscent of the 1870's up to 1914 when many of these were originally built.  Art Galleries, Book Shops, Clothing Stores, Gift Shops and wonderful little restaurants fill these malls.   There are less than fifty of these scattered around Paris but more and more of them are being brought back to life as the French people and the Tourists flock to shop in them.

We then found a building at  #35 rue St. Georges where Renoir had a studio at one time, no plaque on the wall here.  Then nearby was #80 rue Taitbout where we found Square d'Oleans.  The door was locked but we took a photo through the grill on the gate of the beautiful residences behind the gate.  This was the home of the famous Polish Composer Frederic Chopin and the writer George Sands among other famous people. 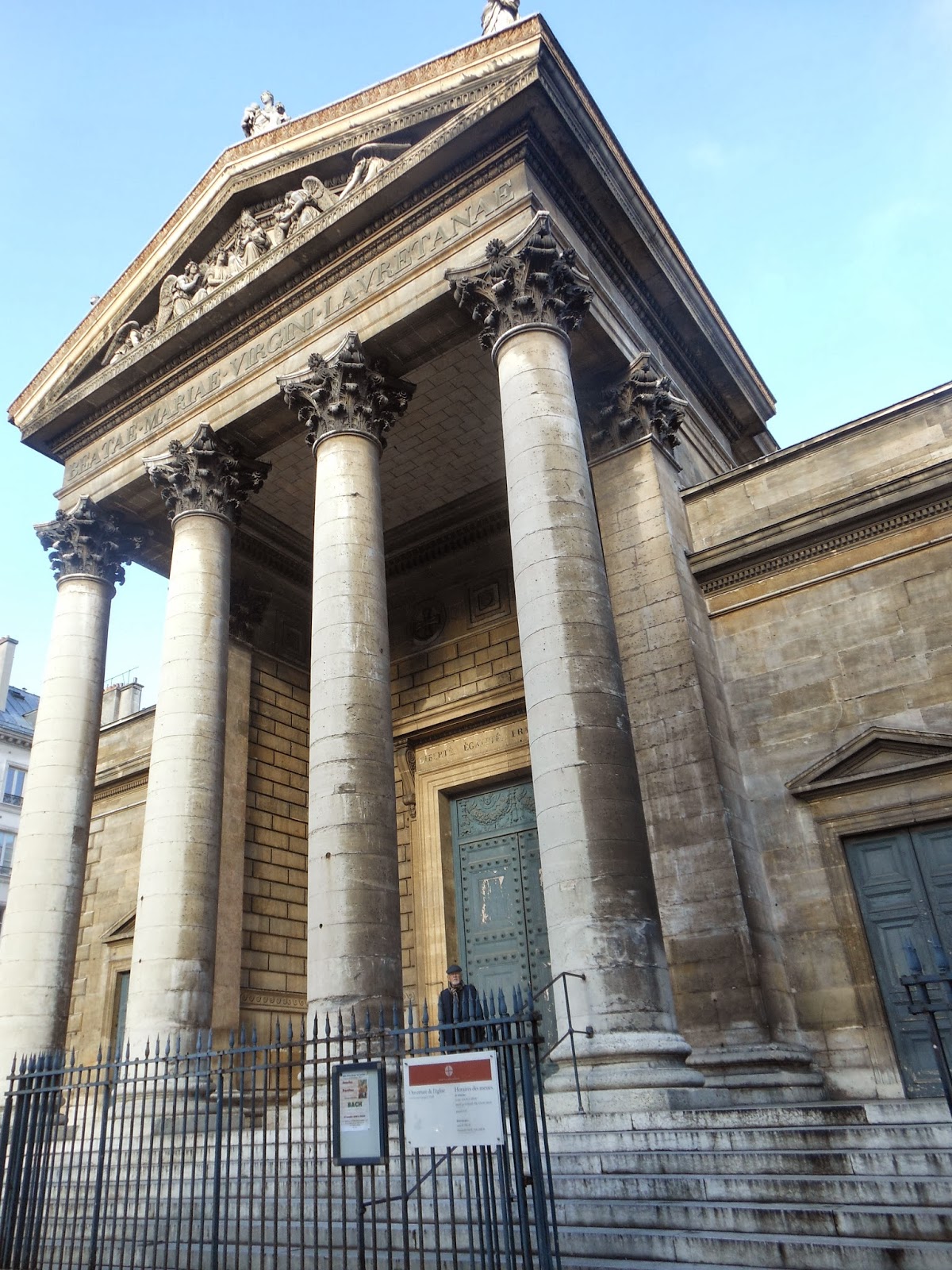 We were standing outside the Church of Notre Dame-de-Lorette talking about the concert that is scheduled for Sunday afternoon when a group of people asked us how to find Notre Dame.  We got out the maps and gave it our best shot but in retrospect I wish we'd taken then on the Metro and shown them how to use it and also get them to Notre Dame or at least close to it.  They were walking they said.   They were from Brazil and spoke beautiful English.  Hind sight is always so much better than what we do but maybe they'll be a next time.   But as of now we do plan to go back to see the concert tomorrow night.

It was now two o'clock and our next site would now be open.  It was closed from noon to two o'clock for lunch.   Located at #14 rue de la Rochefoucauld in the ninth arr. is the home and now a museum of the artist Gustave Moreau.  He was a born in Paris and his father, an architect, recognized his talent and gave his full financial support to his son.  This allowed him to paint and also to give financial support to many struggling artists friends through the years. 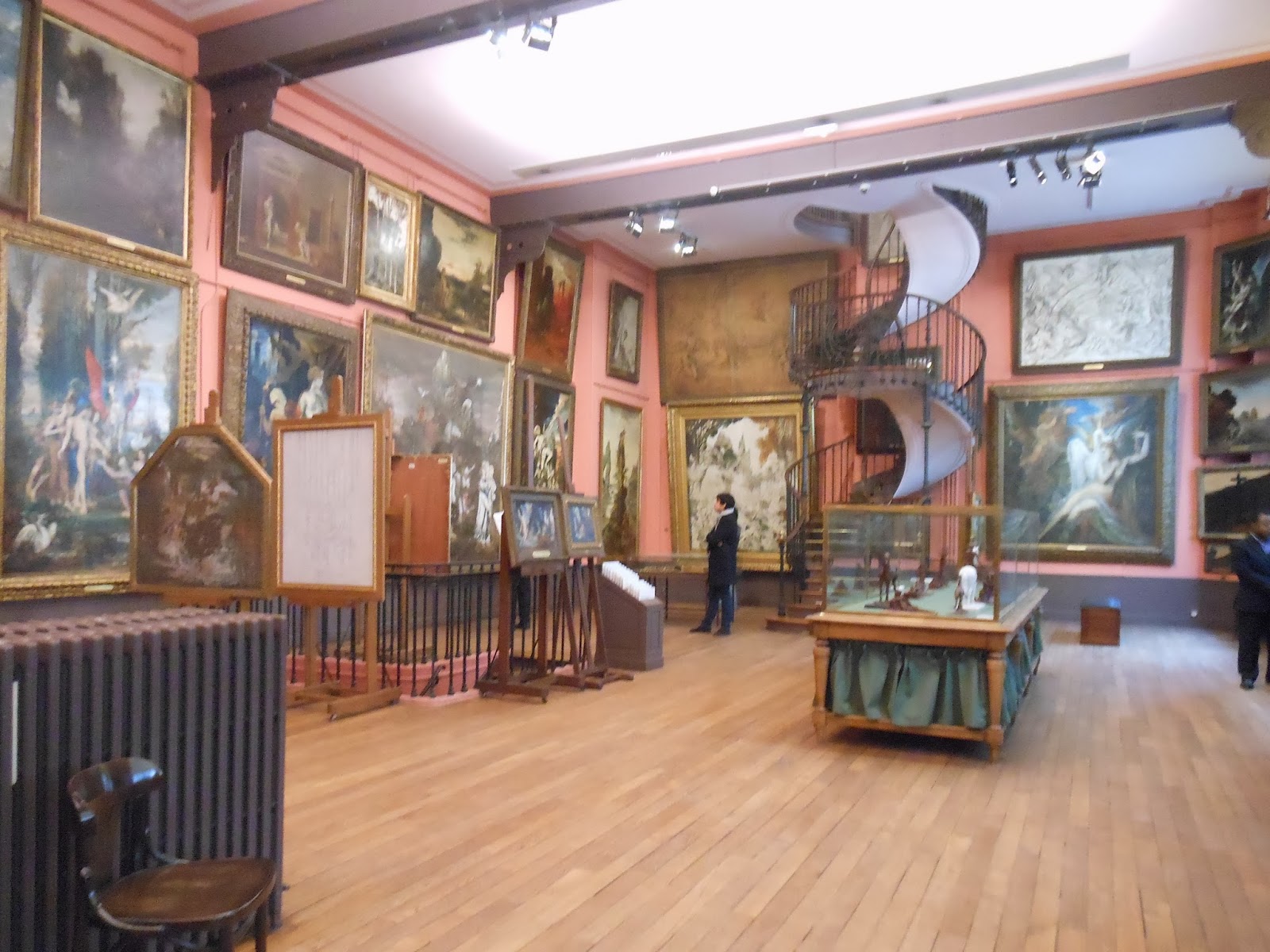 Above the living quarters there were two double storied art studios that each took a full floor.  Each is full of finished and many unfinished works of art by Moreau.   We spent an enjoyable hour there looking at all of the art.   We spent time yesterday looking for his grave in the Montmartre and finally decided it was the one that was positioned on the map but the engraving had been lost over the years.  Much like the one for Edgar Degas but someone had put a marker of sorts on that grave.  That was one of the reasons that we decide to take a look at his Museum.  And, we've just discovered that it is open today for the first time in months after completing a lengthy restoration.  What luck!

After leaving the museum we started walking to some more of the Passages and then decided to hop on the Metro and head for home.  I've definitely got a head cold...but no sore throat....and we called it a day.

But one more surprised awaited us on the Metro.  As many of you know, "street performers" hop on and off of the Metro Trains all the time for a short performance.  Then they pass the hat for coins and are off at the next stop.  But today we were in for a show!   Two neatly dressed young men, suits and ties, started a pantomime with recorded music.  Cute and the French were chuckling at their comments.  Suddenly they started a strip tease routine.  And one was doing a pole dance that had his feet on the ceiling.  The pants were fixed to come off with one swoop of the hand and suddenly they were in their underwear...and they were made from material featuring a map of the Metro System!
Needless to say they received coins from many before they hopped off at the next stop with their clothes in hand.  They dressed and we saw them across the way getting on another train to repeat the same performance.  A fun trip home.

Stopped at the grocery store for meat for tonight and tomorrow before heading home.  It's looked like rain all day but we never saw any and the sun was actually breaking through the clouds at times.   Jim fixed a delicious dinner tonight.  Yes...he's back in the kitchen again.

Hope you enjoy the slideshow:
Posted by Martha at 11:43 AM