December 31st was a quiet day for the most part.  Jim is coming down with a cold we think so he said in for most of the day.  I was out to the laundromat for a load of laundry after a failed attempt to get the machine in the apartment to work.  And later in the day I tried it again and it worked!  At least we got rid of the soap that we'd put in earlier.   I think I'll stick with the laundromat; I understand how that works!

Then I was off to to Poste Office....I need to purchase stamps for some post cards.  I'd found three in the neighborhood and they were suppose to be open until eight o'clock.  Found it but because of the holiday it closed at two o'clock!  Oh well...now I know where it is located and the times. 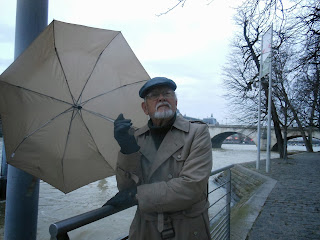 Back to the apartment, Jim and I dressed warmly and took umbrellas to go for our last ride on the Batobus; our annual pass expires today.   We walked across the Seine River and caught the boat at the Louvre stop.  Stood in the light rain for nearly half an hour waiting.  Off at the next stop, we walked across the Pont Alexander and on to our goal:  The American Cathedral of Paris.  It's the main protestant church in Paris.  Looks beautiful but it too had closed early today because of the holiday.  We walked over the RER stop at the Pont d'Alma and found out that all RER trains stop at every station inside of Paris; we hopped on the next train and rode it to the Musee d'Orsay stop and then we walked to the intersection of of Saint Germain des Pris and Rue Bonaparte.  There we used the ATM and then walked across to enjoy or first, and probably last, cup of Hot Wine.  Good, warmed the tummy but not our favorite way to enjoy wine. 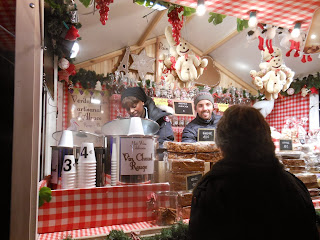 By then it was nearly seven o'clock and we walked into the church for Mass.  At home we celebrate the Virgin Mary; here we celebrated St. Sylvester.  The church was full but not crowded for the holy day.  A nice way to start our New Years Eve celebration.  We were pleasantly surprised when they did not pass the collection plate?

Walked home in the brisk clear air; the rain had stopped and it was a beautiful evening.  Jim fixed our dinner of pork chops smothered in fresh mushrooms and apples.  A salad and some rice along with a good glass of red wine completed our dinner.

About ten o'clock we emptied our pockets and took only the bare minimum of what we might need.  We'd heard on the news that the Metro System from free until two am but we took our cards just in case we needed them.  Our friends had warned us that our planned adventure might be a bit risky.  The weather was still dry but we carried umbrellas just in case.  It was still cold and clear as we left the apartment. 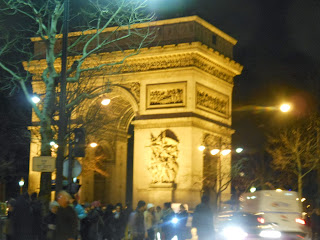 We walked to our Metro Station and walked right through the open gate with everyone else.  That train was not crowded.  At Grenelle we had to change.  This train was headed towards the Eiffel Tower, Trocadero and Etoile.  We were the only two people that could get inside the car; but we stood with our faces against the door.  At each stop, people left and more got on.  But after Trocadero we did find seats.  Apparently most were going to watch the Eiffel Tower for Midnight.  When we arrived at the Arc de Triomphe Etoile we were amazed.  The police had block all of the exits except for one and we were jammed like cattle into a shute out the Friedland exit.  Once outside we had more room and could see the Arc de Triomphe but all access to it was blocked by hundreds of policemen. 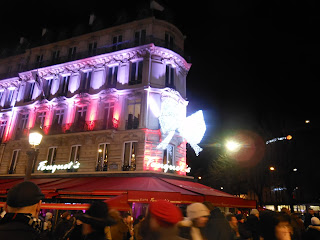 We felt good about all of the policemen.  But they kept funneling us down a side street parallel to the main street until finally we were allowed to enter the Avenue des Champs Elysees at rue Balzac; about three blocks southeast of the Etoile.  It was eleven o'clock and we'd achieved our goal.  We crossed to the left side of the street and then walked back towards the Arc de Triomphe for some great photos before turning around and slowly walking down towards the Tulleries.   It was fun snapping photos of the Christmas decoration; we'd not been here since we'd arrived.  The blue circles looked very different from the views we'd had when we had been nearby before. 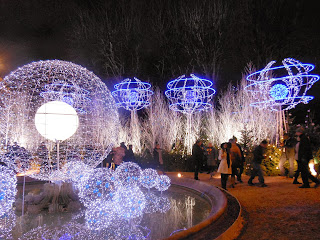 It was about eleven thirty when we reached the beginning of the Tulleries.  Every bench we'd passed on the Avenue had been packed full of people.  Some of their faces said to me "why am I here" as they waited for the magic hour.  We kept walking and by eleven forty-five we were standing on the bridge Pont Alexander and decided to stop there to enjoy the Eiffel Tower strobe lights at midnight.  A surprise for everyone was when on the stroke of midnight...the lights on the bridge were turned off to enhance the beautiful flashing lights and the many individual fireworks being set off.  We did not see any formal fireworks display. 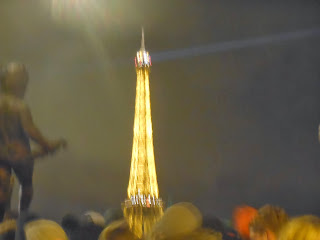 It was beautiful and I got a good video but wasn't thinking and had my camera vertically to get all of the Eiffel Tower in the lens!  Oh well, I posted it on Facebook anyway this morning. We watched many people who had their bottles of champagne and glasses making toasts to each other.  We waited until we arrived home at one o'clock to make our toast!    Yes, we walked all the way home along the broad avenue that frames the quai of the Seine River,  A beautiful night that stayed dry and was full of people (and many policemen) enjoying the start of 2014.   It was two o'clock on January 1st before we turned out the lights.