Yesterday was a quiet Sunday in Paris for us.  We spent most of the day in our apartment; reading, checking the Internet for news, watching our Museum Channel on Television, bookkeeping for me and Jim did the cooking.  Our colds are using lots of tissues but we're mending. 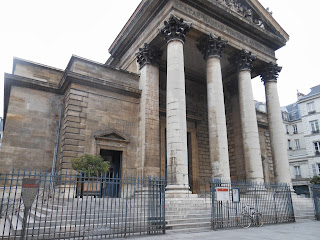 About three o'clock we headed out the door for the Metro.  We only had to make one change to reach our destination.  There we walked up the exit and we were right next to...shall I say it sits on top of the Metro...our destination.   The church of Our Lady of Lorette.

We stopped by this church yesterday and saw the posters for the Concert tonight that is Johann Sebastian Bach:  Sonates and Partitas.  It sounded good so we came here this afternoon for Mass instead of St. Eustache as we'd originally planned.   And, it would also give us an opportunity to see the inside as it was locked up tight yesterday. 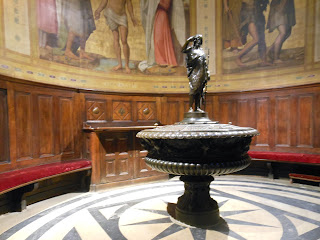 In reading our "Forever Paris" book about the walks; we discovered that this is the neighborhood where Monet lived with his parents during his early childhood.  The beautiful baptismal font that is pictured here was the very one where they baptized him as a baby.  So it has a bit of history for us also.

We arrived early before four o'clock and checked out the best seats for acoustics and then enjoyed the practice session.   The actual performance started at four-thirty; by then the church was full and an elderly gentleman perfectly blocked my view!  Oh well.  Did I say...even with the heaters going full blast, everyone kept their coats on during the performance...it's a cold but dry day in Paris. 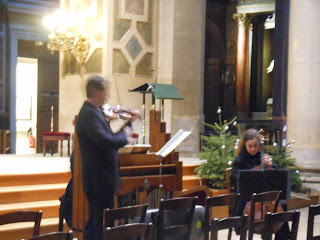 The first part of the event was a lecture on the music that was to be played.  We didn't get much out of that but the music was beautiful.  It you are on Facebook; I posted a short video.

We had half an hour between the Concert and the beginning of Mass, so we took the opportunity to walk around the neighborhood.  The Mass was in French and sometimes it's hard to concentrate but we do enjoy the organ and singing by the people.

After Mass we hopped back on our Metro at the door of the church and arrived home for a late dinner prepared by chef Jim.  Yes, I'm doing the washing up for him.

Hope you enjoy the mini slideshow:
Posted by Martha at 1:38 AM