Well....I just accidentally deleted the entire blog that I'd just finished.  So here I go again. 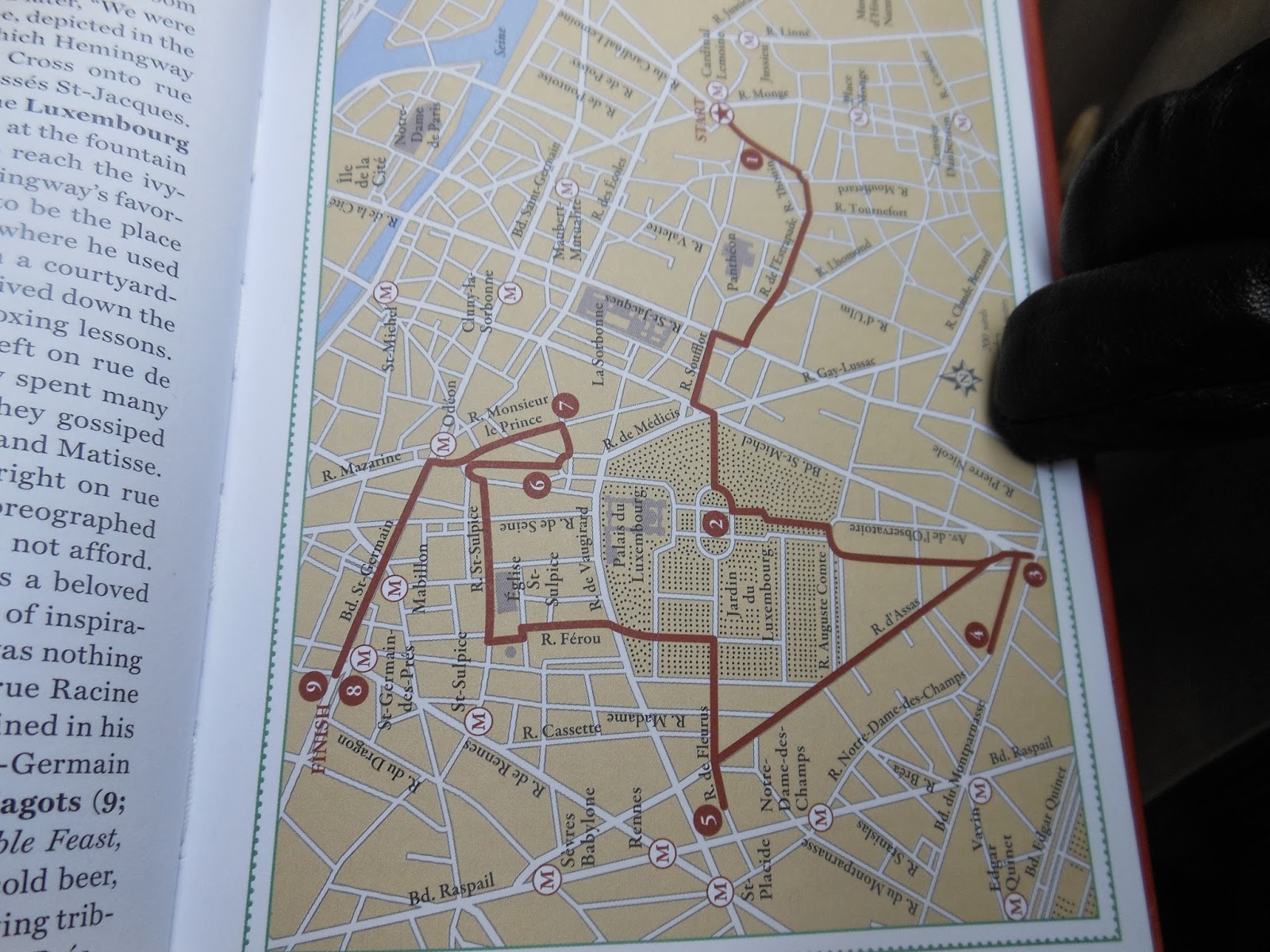 Today I did my grocery shopping before noon and soon we were off to find the haunts of Ernest Hemingway using our book about Paris Walks.   We caught the Metro to the stop for Cardinal Lemoine where the tour starts.  We walked up the winding and slightly uphill street to the top.  It ends at the place de la Contrescarpe that is depicted in the opening of his book "A Moveable Feast".  Just before you enter the place you'll find # 74 and a plaque commemorating his two bedroom apartment that he shared with his wife Hadley in the early days of their marriage.   This is also the spot where the street known as Rue Mouffetard ends; this street was made famous by Julie Childs as she did most of her shopping on this street and we also spent lots of time there last September. 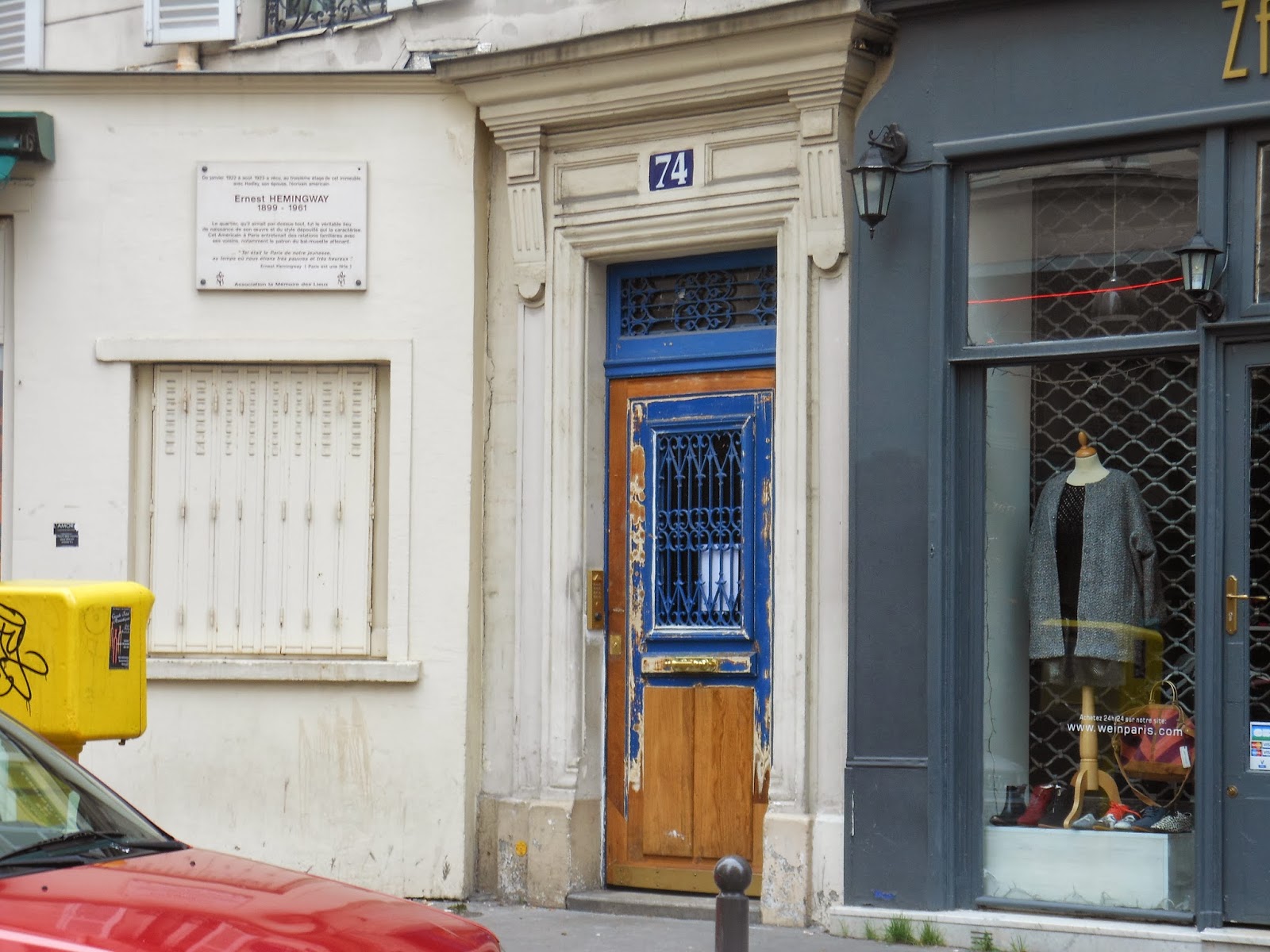 Jim was amazed that we'd been so close and never seen the plaque.  From there we continued following the route in the book and soon we were walking past the Pantheon.  There were several huge Christmas trees set up in front with large bows tied all over the trees.  The bows had four foot ribbon streamers tied to them and with the strong winds coming over the top of the hill it looked like snow blowing off of the trees.  Suddenly Jim noticed the Eiffel Tower in the distance and suggested that I climb the stairs and take photos of it through the trees. 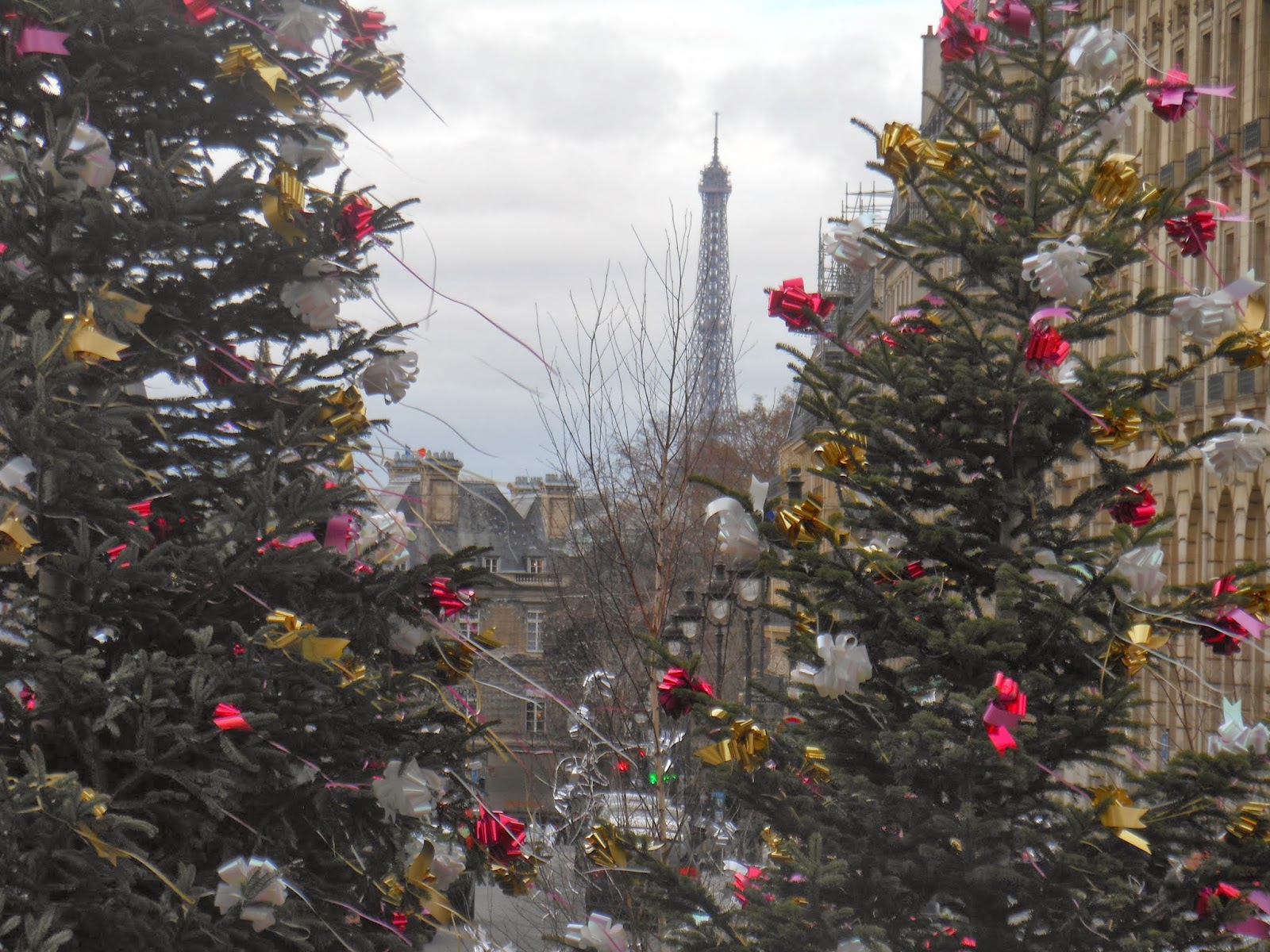 By this time we were having lots of fun and I suggested that I show him the apartment where we four girls stayed in September after he went home.  Off we went down a side street instead of following the route in the book that told us to walk to the Luxembourg Gardens.   I must have missed a street as I didn't find the apartment but rather than back track to find the apartment and/or the gardens we continued walking in the same direction.   I was sure we were walking parallel to the park!

Well if you know Paris you realize that streets run every which way and the names change constantly on most streets.  Soon we were on Blvd. Jacques and that sounded good.  Along the way we saw the Paris American Academy next to the Val de Grace which is a church and a museum for the French Military Medical History.  Can't be far from the park I was sure.  Suddenly we were on the Blvd. Pont Royal and I knew I was in trouble.   I kept bluffing and walking but finally stopped and asked for directions.  We were way off course.  He directed us back to an RER Station and there we caught the train and headed back towards the Seine River.   Ah Paris.... 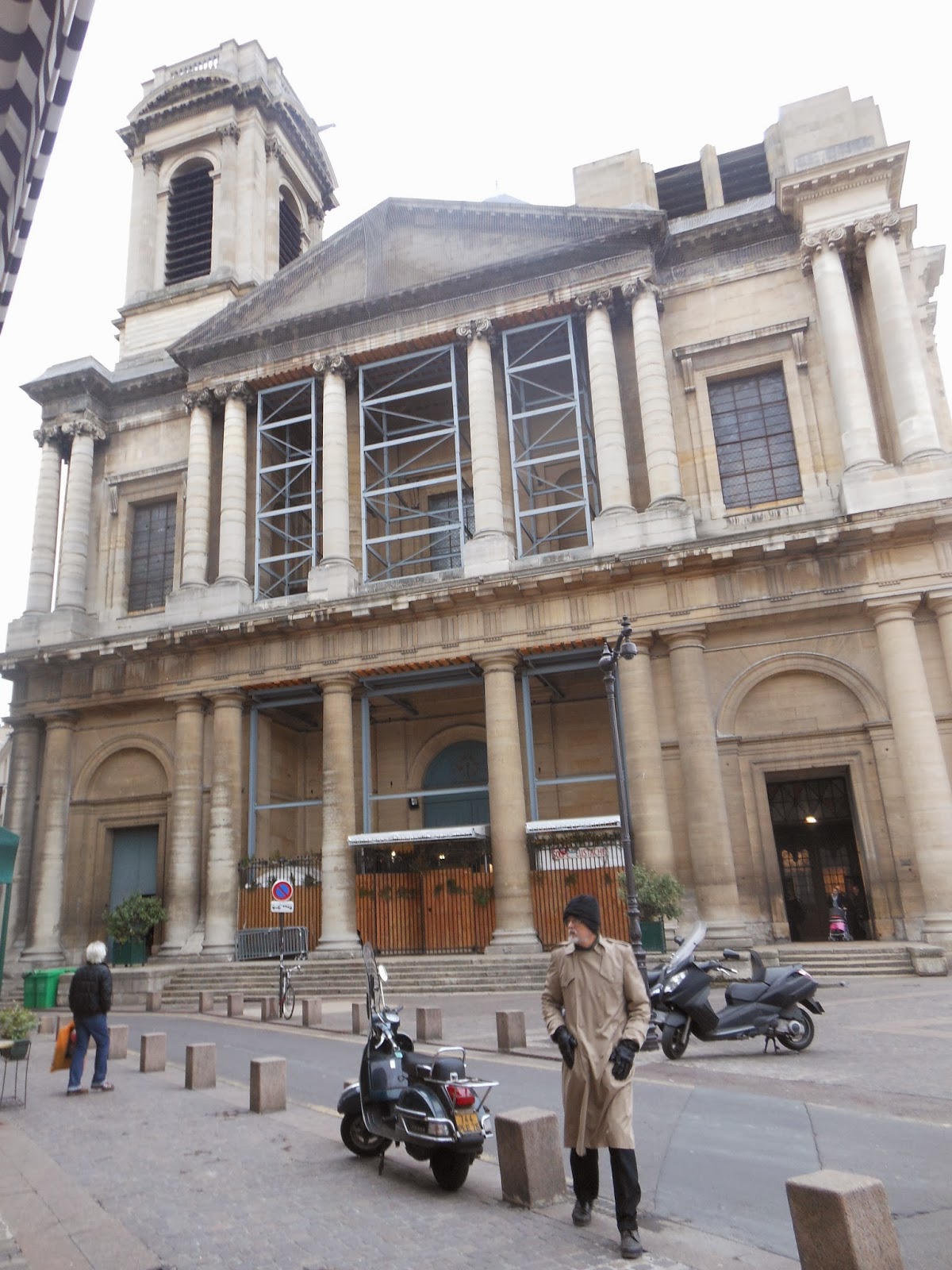 We stayed on the train until it reached the Les Halles Station.  There we departed and worked our way across the huge underground shopping mall and found the exit that took us up and out right at the side entrance to the St. Eustache church.  We walked inside and admired the nativity scene and rested a bit to catch our breath and adjust our attitudes...both of us.  Ah Paris...

We enjoyed seeing all of the changes to the area with the construction gone around the outside of the church and then walked to see the front which we'd never seen before.  We were amazed at how different it looked from this angle; it looked much like a narrow St. Suplice and also like St. Madeleine.  We continued walking around the other side that has stores built right up to the walls.  From there we walked to the Metro Station on rue Etienne Marcel and hopped on board.  By the way, when we renewed our weekly pass this morning we notice that the price had increased two euros.  We assume that all of the Metro tickets went up a bit but not sure.  It's still a great bargain if you are in Paris for a week or more.

Jim remembered that we'd promised to check out pillowcases for his sister for her square European pillows so we hopped off at Cite Station and walked to the Bazar Hotel de Ville department store.  There we found what we needed and left to catch the Metro home.

A bus stopped outside the store and I saw that it stopped at The Louvre so I grabbed Jim's arm and we hopped aboard much to his surprise.  But, when I explained that by taking this bus we wouldn't have to walk up and down all the stairs on the two changes required for the Metro from this area to home he was a happy camper!

It started to sprinkle lightly as we got off of the bus but the walk home across the bridge was shorter than from our Metro Station so we were glad that we'd used the bus.  Good day with some ups and downs.  We'll do more of the Hemingway sites another day and stick to the route!

A good thing today, our daughter's post card arrived that she'd mailed several weeks ago.  The mailman stuck it where we could get it as he knew we didn't have keys to the mailbox!  She did a good job addressing it.  Always fun to receive mail from home when you are traveling.  A not so good thing today:  the television decided not to work this evening.  It will be interesting to see what we hear from the management company tomorrow.  But the Internet works well and I'm going to close this while I can.  Hope you enjoy the slideshow:
Posted by Martha at 2:18 PM