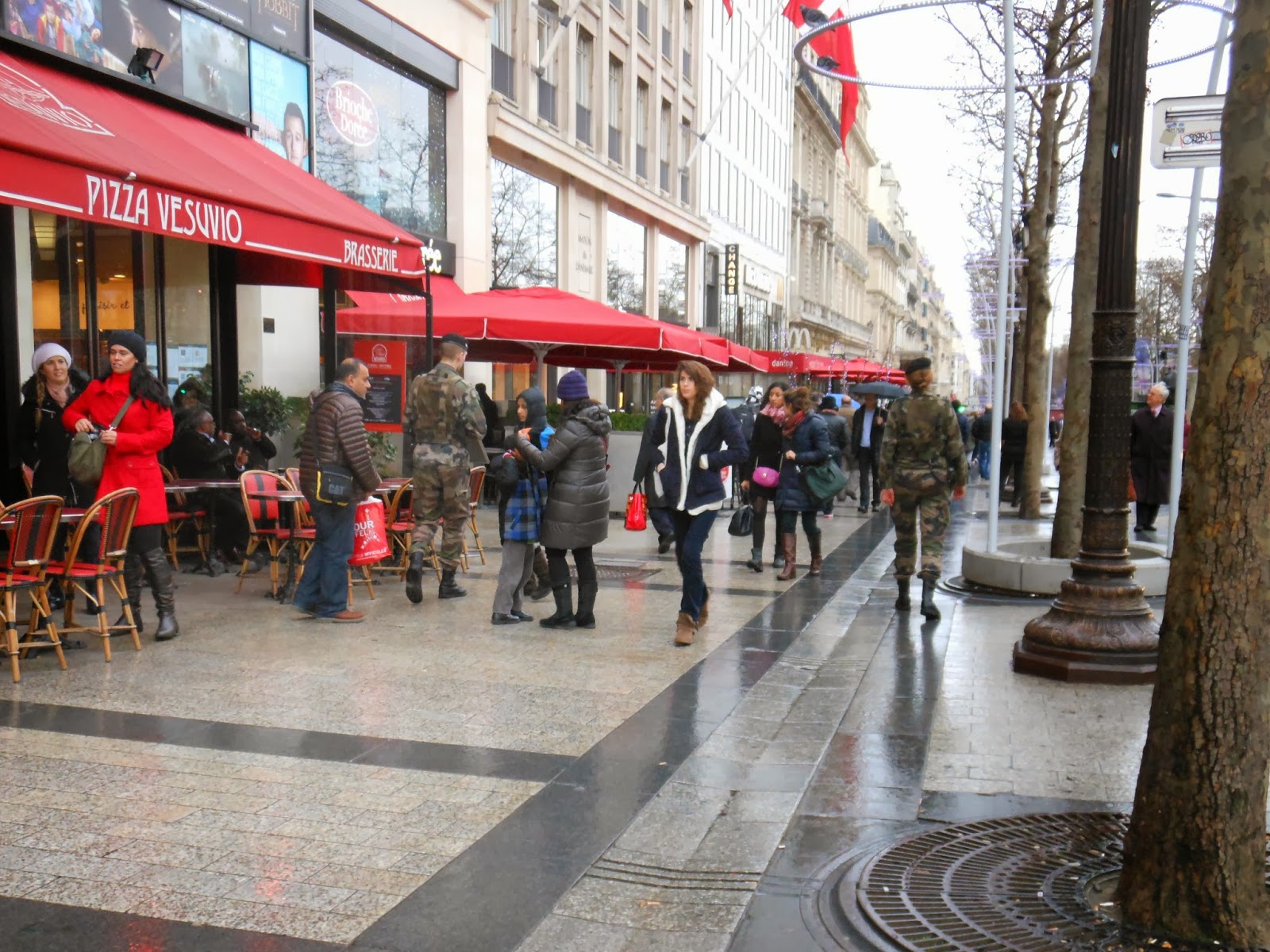 WHAT did I say...yes...today I strolled with a team of three army personal carrying their automatic weapons at the ready...a point man and at least thirty feet back two more spread apart making a perfect triangle as they walked the famous boulevard.  I've never felt quite so safe!

My day started about nine o'clock when I got up and opened my current book; my third since I've arrived, called "The French House" by  Nick Alexander.  A great little mindless novel about an English woman and a French man who decide to change their careers and become goat farmers in the mountains above Nice, France.  They start with a very old family owned home that is falling down literally as there is a hole in the roof when they arrive and the story goes from there.  Lots of fun and keeping me interested. 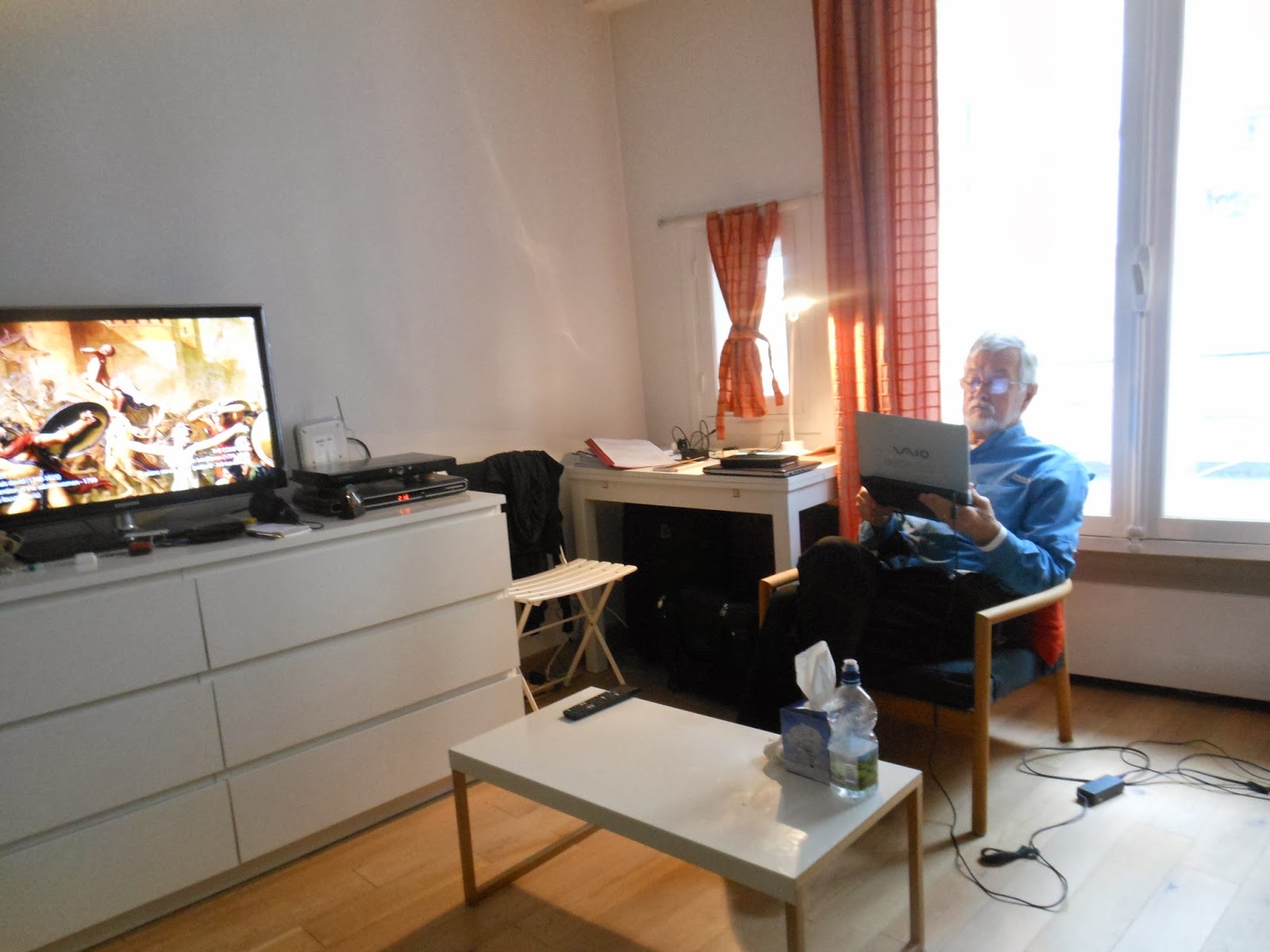 Jim woke about eleven o'clock and after breakfast I did some shopping for groceries after Laura from the management company arrived to fix the television that stopped working last night.  Since I have to carry everything for four blocks and the storage space plus the refrigerator are all very small;  I do this nearly every other day.

Jim is thrilled to have both his computer and television working but is still under the weather so today was a day off for him.  But I was soon out the door and on the Metro; three changes and I was walking out to the Avenue Des Champs Elysees from under the Arc de Triomphe. 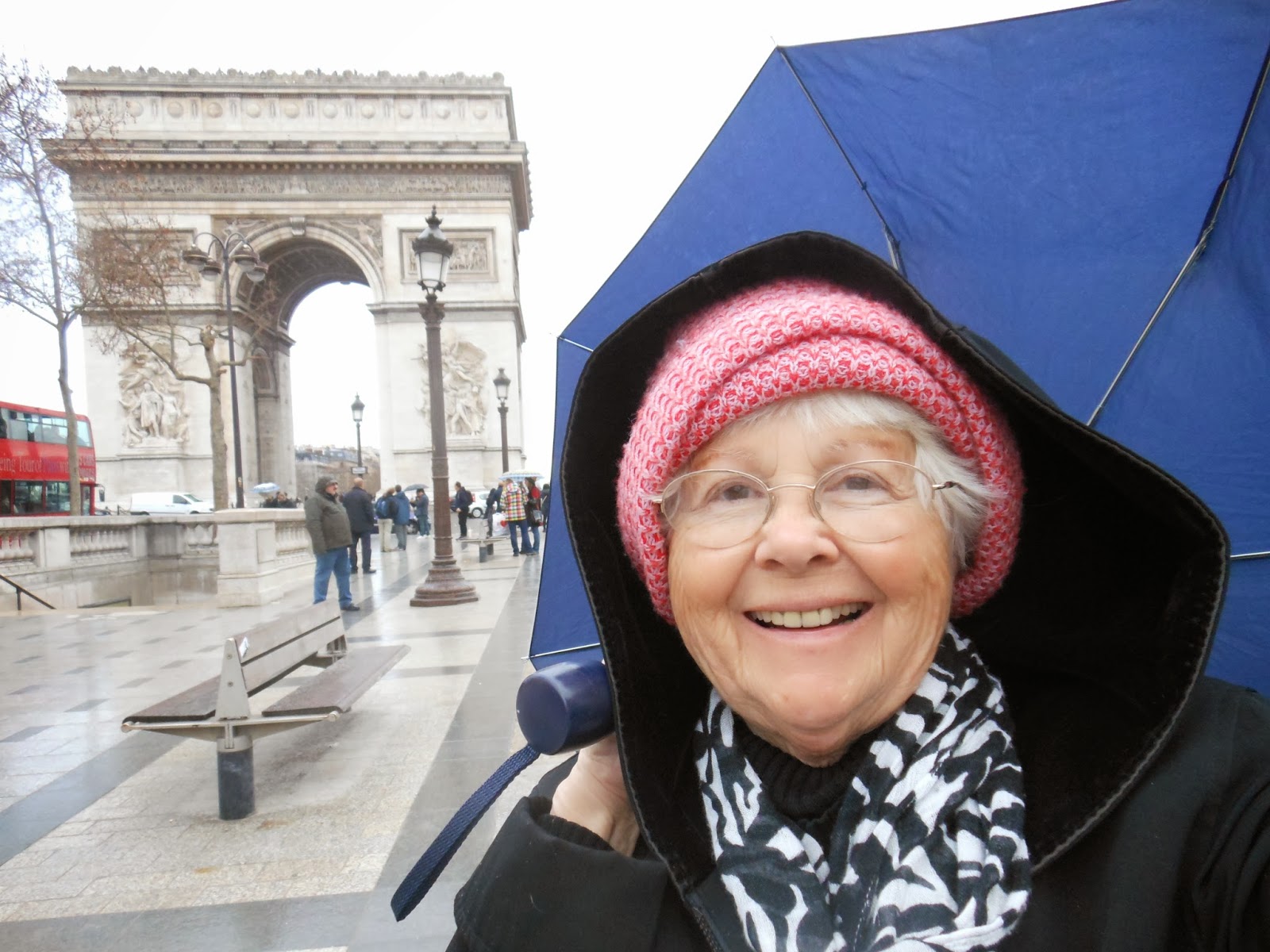 I snapped photos of some of the Christmas decorations that we'd missed  on New Years Eve and took others again in the daylight.  I stopped for a look at the Starbucks in an old Galerie and snapped photos of the theater marques as my object was to see if there was a new movie playing that we wanted to see and is also still in English with only French subtitles (Version Original).  The only one that seems interesting is the new one about Wall Street but I don't think that I really want to see that one.

I stopped for some shopping at the Monoplix on the Avenue and sure enough I found some great bargains on the square pillowcases!  It was fun shopping for some new things to leave for the next guests in the apartment also. 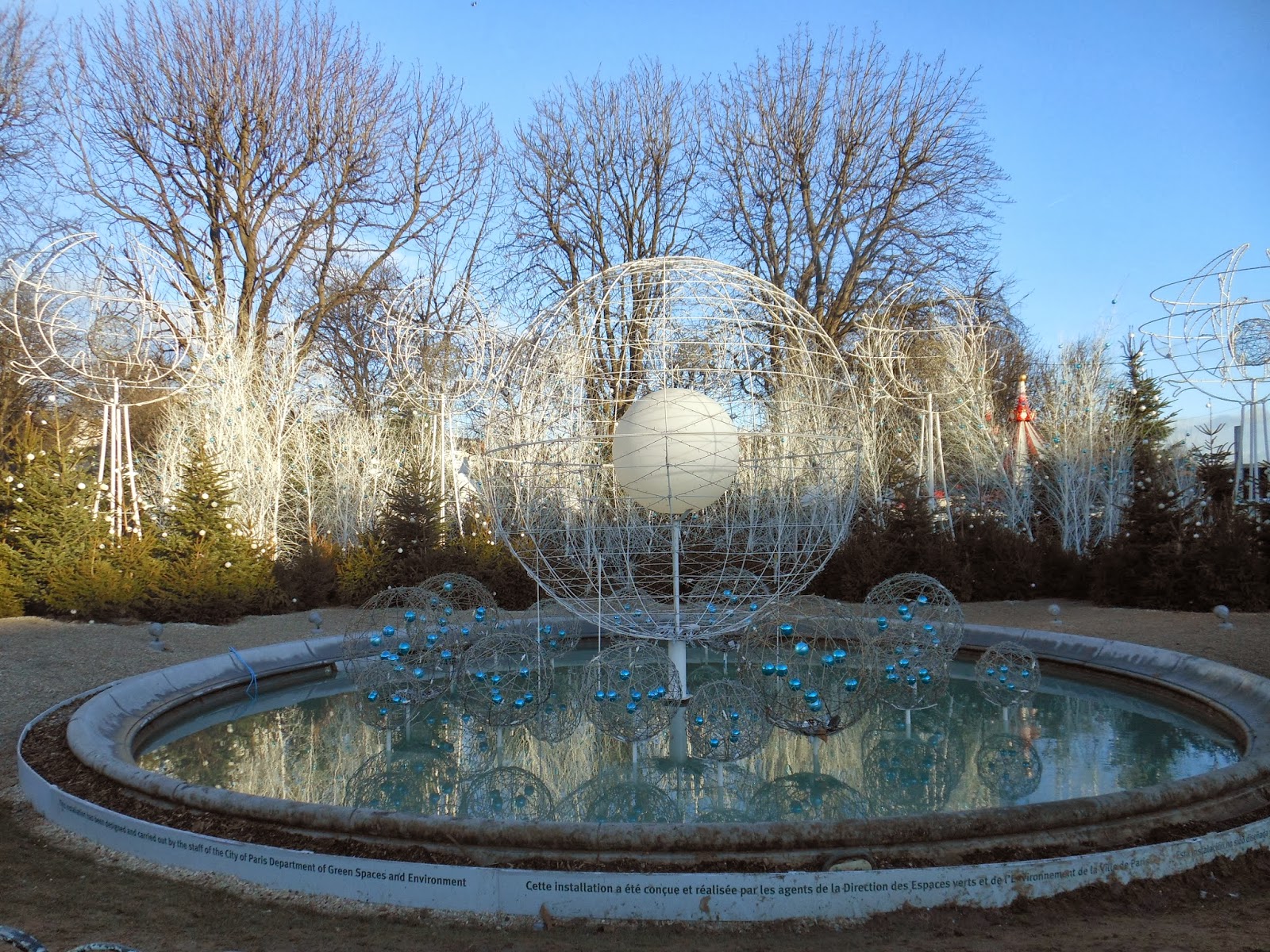 All too soon I was past the Rond Point, the intersection of the Champs des Elysees and Franklin Roosevelt; I crossed the street at Winston Churchill and caught the Metro at the Clementine Station.  Wasn't that the name of Winston's wife?  Back to Concorde, changed to the twelve which took me to Severs Babylone and there I changed to the ten that took me to my home station of Mabillon.  I walked into the apartment about half past four.  A nice two hour outing for me.

I've discovered that I am just fine on my own when traveling but also that I enjoy it more when I'm sharing my journey with another person.  Solo traveling is okay but it's much more fun to share!

I'm enjoying cooking since Jim's been sick and he seems to be pleasantly surprised; he forgets that I did all the cooking during the early years but didn't have the luxury of cooking with wine, butter and special seasonings.  Tonight  I cooked rice and the sauce was slices of two large white sausage links, slices of fresh mushrooms, seasonings, butter, a touch of spicy mustard and simmered in white wine.  Mixed vegetables completed the plate.  A glass of red wine added a nice flavor to the meal.

Dessert tonight is one we have most evenings; half of a chocolate bar; like a hersey bar but European chocolate in the plain wrap on the bottom shelf in the grocery store.  One of the best bargains that my twin and I discovered back in 2009.   Delicious!   Hope you enjoy the slideshow:
Posted by Martha at 11:01 AM

Hi mom, I have enjoyed your blogs. They are quite different this time because you are not always on the go. It has more of the feel of reading about the daily life of an retired Parisian. However one who actually goes out and enjoys the city on a daily basis. Looking forward to seeing later in the month.

thanks to the info from my father added insight thank you so much, may be useful for us all