DAY 10 ON THE CAMINO

Last night the dorm completely filled by 4 pm..  we were one American (me) several who spoke English very well including an Italian girl who works in Philadelphia.  4 germans,  1 from  Argentina and the rest all from Italy. 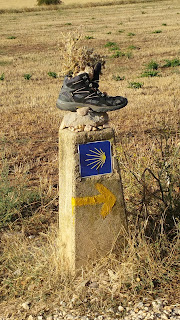 About 5:30 I walked over to the bar to see about dinner.  He said not until 6:30 so I got a glass of wine and settled in.  Soon Jorge arrived and sat down to talk.  It's his 36th birthday and the italians are coming over to celebrate.  He asked me to join them and of course I was delighted.

The bar had many more than expected so we took the late seating and they  brought us snacks and more wine.  Actually I think Jorge picked up the cost.  We all had a great time and finished up just before ten which is our curfew ... they lock the door. .. and that's also about the time that the very loud thunderstorm rolled in.  A fun night and we all ate the 10 euro pilgrim meal that included a large salad..pasta or chicken with French fries. Dessert was a choice of flan or ice cream and of course more wine.

I woke up about 5 am....2 were up and on their way by 6 am in the dark as they were walking the full 40 km to Logrono.
Soon others were stirring and by 7 the young German girl  left with me.  She was carrying a 50 lb pack and she still out walked me .   We missed the first directions and after half a mile uphill decided we'd missed something and walked back.  So we got an EXTRA mile today.  But a Texas lady also missed it so we were not the only ones.

It was a day of rolling roads through farmland with no shade.  We didn't see our first town for 8 miles.  By then the sun was very hot but a good breeze kept us cool.  Twice I caught the German girl when she stopped to rest and then she'd pass me again.

The town was Los Arcos, a beautiful and very old town.  They had a festival last weekend and had a running of the  bulls through the streets.    Would have been fun to see if I'd been walking faster.  My Arizona people who started with me were there...my new friend Monika who walked with me the first two days is in Burgos today...I keep plodding along.

But, I did stop and join the Germans for an early lunch, a slice of a camino favorite...Tortilla  de Pattaya ... like an omelet filled with potatoes.  Delicious.  We were in the plaza of the church and although no mass, I did enjoy a visit and a short concert being played on the massive organ.

Back on the road for another nearly 8 km where I reached the Albergue Sonsol where I had reservations and my backpack.  Opps...the backpack had not arrived .

Phone calls were made and within ten minutes it arrived.  The Texas lady said her pack did not arrive until 11 pm yesterday so I was more than a little concerned.  Tomorrow I'll be carrying it again as planned.

Showered, laundry done and I'm listening to the arrivals...we are one big room with 24 beds...12 bunks.  I'm in a Lower bunk up against a wall which is nice.

OMG, Martha, I can't even imagine. But that is at least partly because Dean and I haven't traveled much at all, and you and Jim have traveled extensively. I don't think this would be something a newby traveler would want to try. It boggles my mind just reading about you!!!! Great reading!!!!!