DAY EIGHTEEN ON THE CAMINO

Hard to belive I've been gone from California for three weeks and that Jim will join me in only three and a half weeks.  I'm looking forward to having him on the journey. 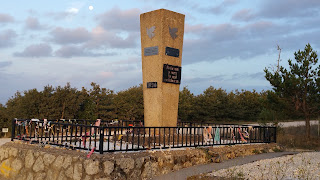 Today I started very early and experienced walking in the moonlight for an hour.  The first two hours were spent walking up the mountain of Alto Mojapan which is at 1150 meters. Along the ridge at the top there is a memorial to people who were executed here and buried in shallow graves in 1936 during the Spanish Civil War.

The remaining two hours were mostly downhill or level as we eased back into farm land at the lower level.  Arrived at San Juan where there is a very large church and an Augustiņian Monastery built there in 1150.

As this was our first village of the day many stopped for a break included Christina who had been somewhat walking with me most of the day.  She was always a ways down the road but I could generally see her. Last time I'd seen her was when we crossed the cow pasture and had stopped for photos.

But soon she passed me again on the flat road to Ages where I decided to spend the night.  It was early and she may have walked on to Burgos or somewhere inbetween.

I'm so glad I stopped here as I saw Lillian who I've not seen since Roncevalles on the third day.  I first met her on the first day of walking when Monika and I found her near Orisson. .. very confused and only speaking her native tongue..Danish. .. which Monika also spoke.  She thought that she was taking the level road and had made a wrong turn.  We got her to Orisson and she has become a legend on the Camino.  She has Parkinson and shakes badly with her walking poles. She is also carrying a large pack.  I heard that she also speaks English and we had a wonderful conversation today.   She stopped for a day because her knees are bothering her...but she was soon on her way for another 3 km before stopping for the today.  She will probably beat me to Burgos tomorrow.  She says she is so strong because she walks up and carries her on groceries several flights of stairs where she lives.  Such a lesson she has been to everyone who has been fortunate to meet her on the camino.  We are so blessed.

Tomorrow I will walk to Burgos ...a big city... and meet up will some pilgrims I've met who have stayed two nights in Burgos.  It will be great to see them again.  We've stayed in touch using facebook.   Buen camino