DAY FOURTEEN ON THE CAMINO

Last night the five of us from the picnic went to a pilgrims dinner and Mark and Jan picked up the check.  Then Chris paid for Gelato treats afterwards.  A fun evening with great people.  Hope to see Mark and Jan along the camino...they are faster walkers than me so unless they stop along the way....who knows.  I'm learning the pilgrims have a way of reappearing when least expected. 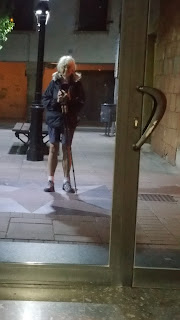 I was out the door in the dark this morning along with many others. This photo is a reflection in a store window.
I was well on my way when the sun arose and it was a beautiful sunrise.  We walked for two hours along gravel and dirt roads between vinyards.  The dirt was deep red and it's said when it rains the mud sucks your shoe down and then clings like clay.  So glad it was a dry day.  But there was no shade and it was a much hotter day than yesterday or maybe it was because of the lack of shade.

I walked solo all day and enjoyed the ten hot air balloons in the sky near Azofra where I stopped for breakfast.  My favorite orange juice and a slice of warmed tortilla de patatta.  I shared a table with a lady from Mexico .. just over the border from Texas.  She has had a cold ever since starting and has decided it must be an alergy.  She got some medicine from the pharmacy .   Then off I went for a another two hours of walking.


It got very hot with no shade and people were literally sitting in the shade of grapevines to find some relief.

The last two hours of walking was different in that we now had a combination  of freshly cut hay, crops and still a few vineyards.  And we were slowly climbing up and up.

At the end of the day we climbed 1247 feet in that last two hours.  We all were ready to call it a day when we arrived in Ciruena..

Here I found two Australians, a lady from Cape Town south africia,  a man from Northern California and my three New Zealanders.   Jim said it sounds like you can practice your English tonight...LOL

Dinner will be here in the albergue which should be a fun evening.

You continue to amaze with your stamina and determination...bravo! Be careful of that heat...heat exhaustion or heatstroke can bring down the best of us. Are you able to find a source of water frequently and reliably enough to keep your bottle supplied? How are your feet doing? Thank you for continuing to take the time, and find the energy, to tell us about each day. It is so interesting! Fondly, Leslie