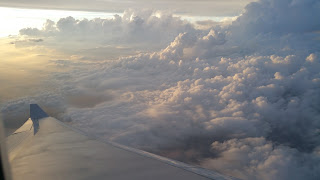 It's 5 o'clock in the morning I'm at the airport at lax all checked in and ready to fly.  I have another hour until my flight leaves.
Yesterday about 5 o'clock in the afternoon I decided to check information and see how well this flight did yesterday.  Probably not a good idea because I discovered that the six am  flight did not leave until 1:30 in the afternoon. I would've missed all my connections and been a day late arriving in spain.
I leave LAX at 6 am...fly to st. Louis and then to Philidelphia. ....they are having big storms there so it should be a bumpy ride. God willing my flight leaves at 6:45 pm...east coast time from Philadelphia and I'll arrive in Madrid about 8 am Wednesday morning.
Later.....
I'm sitting in St Louis in the airport ... the flight to Philadelphia is delayed and I  may not make it. But there is a very nice gentleman who lives in Philadelphia and flies all the time and he's going to help me get from terminal F all the way to Terminal A which is the international terminal at the other end of the airport.... he said there's the shuttle and he'll see that I get on it.   his car is parked outside that  terminal so he's happy to make sure I get there.
Hopefully I  won't spend the night in the airport in the USA.