DAY THIRTEEN ON THE CAMIMO

Last night in Navarrete I  ate dinner in the village with the Ohio and London couple.  Lots of energy and fun.  The pilgrims meals are so easy...everyone just adds their 10 to 12 euros to the pot and the bill is paid. 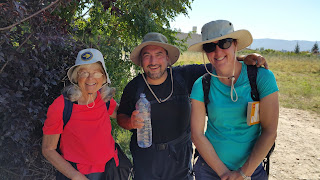 We had so much fun we missed the 8 pm mass but did go in at the end to see another fabulous gold altar.

Up early and out the door by 7 am.  Walked all day with Debbie and Chris from London.  They are doing the camino in eight segments and this was their second.  They leave for home tomorrow...they are doing two per year.  They adopted a sole pilgrim last April and called him their tag along.  This segment I became their tag along.  Great fun and loads of energy.
It was a comfortable walk through the vinyards today on mostly gravel roads.  Mostly gentle rolling hills.  We took an option trail to stop midway in a village for breakfast.  Other wise no villages on the direct route between Navarrete and Najera where we are staying tonight.  It was a 5.5 hour walk of 10.79 miles making a grand total to date of 138.51 miles.
We were joined off and on during the day by Mark and Jan from Ohio.  They are newly retired art teachers and will be finishing their camino about the same time as Jim and I so will probably be seeing them off and on along the way.

After checking in and our showers and laundry; Debbie went shopping for picnic supplies.  The hotel let us take dishes with our food across the street where we sat on the grass near the river for a delightful picnic 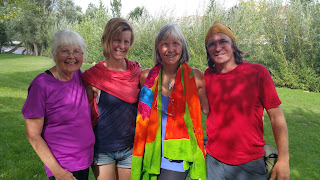 Another good day on the camino.   I saw three pilgrims today that I never expected to see again.  It's a blessing to be with such wonderful people.