DAY FORTY NINE ON THE CAMINO

Today was only 4.13 miles including the mile off trail to our Casa Rural out in the countryside.  It's in a 600 year old building and feels like a hunting lodge.  It took us nearly three hours to walk here including our breakfast stop. 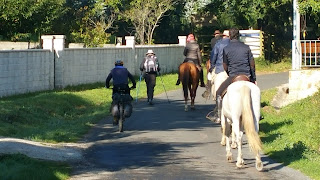 Fun photo when we had pilgrims on horses passing and a bicycle pilgrim also passed and I took a photo of the three methods to do the Camino.  For walkers you are required to walk 100 km...from Sarria.  Horses and bicycles are required to do 200 km.  These are the minimum to receive the Compostela certificate.  And you must have two stamps per day in your books.   I will have filled two books by the time I arrive in Santiago.

It was clear when we left at 9 am and soon the sun was shining also so we followed our shadows for most of the morning.  We did see a bit of fog off in the distance just before we stopped for breakfast mid way through the walk.

We planned to walk to visit some ruins after we arrived but the Senor of the Casa offered to drive us there.  So glad as it was many ups and downs and nearly three miles each way.  The castle was built in the 13th century and is unusually well preserved.  The state is currently restoring it to its former glory.  It was build to house soldiers who were protecting the pilgrims.   It is officially know as the Castillo de Pambre.

Our afternoon has been spent enjoying some of the best wifi we've had for several days.  We do have to sit in the common room off the lobby but since we're the only guests....not a problem.
And a grande beer adds to the enjoyment.

It's been another wonderful day on the camino.....  Buen Camino

I am going to really, really miss these daily blogs when you are done. It has gone so fast!!!!

Re Emmabee: fast but still step by step.